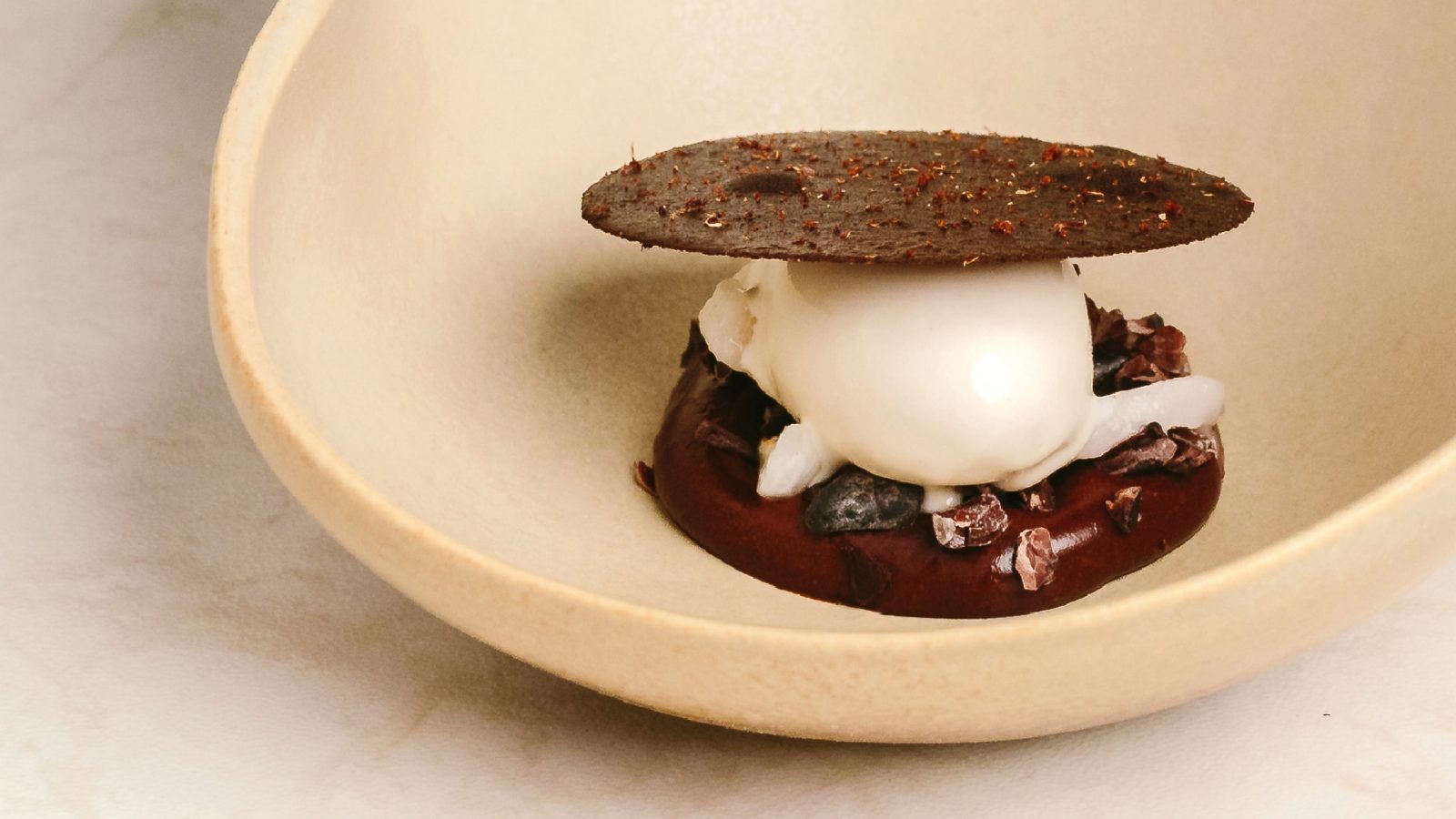 In the veritable abundance of dining options Hong Kong has to offer, the vibrant South American restaurant Mono remains one of our favourite gems thanks to the sheer passion and seriousness chef Ricardo Chaneton is able to imbue into his craft.

Of a number of native latin American ingredients showcased in chef Chaneton’s creations, the cacao pod takes centre stage. As the Petrus-alum deemed to shine a light on the culinary roots of Latin America, a region still lesser understood in Hong Kong, his signature tasting menu introduced a laboriously crafted cacao-infused mole sauce that involved no less than 26 ingredients, pounded with mortar and pestle. Early visitors to Mono will also remember a revelatory chocolate dessert that nodded to the cacao-producing regions in Venezuela — featuring cacao nibs, chocolate mousse and burnt white chocolate.

This month, attesting to the chef’s devotion to authentic flavours and ingredients of his ancestry, Chaneton has crafted a brand new dessert: presenting a first-ever cacao sensation made entirely from scratch — starting with the cacao pod.

Using directly imported Ecuadorian Trinitario cacao pods, the task of processing cacao pods in-house is an arduous operation, using a multitude of methods to ensure no part of the pod is wasted.

Each bright, lacquered shell is cracked open for its fleshy white seeds inside, which further break apart to reveal the divine cacao beans that inject so much flavour into our palate. The beans are then roasted and broken by hand into nibs. Thereafter, they are placed into a perpetually churning grinder to generate a smooth fluid that only becomes chocolate after the addition of cacao butter and organic cane sugar.

The new ‘Cacao Trinitario’ is a 100 percent cacao dessert, comprising four distinct layers, each showcasing a different component of the pod, and with each bite imparting a differing textural experience.

The white, sweet cacao pulp that clings to each seed, likened to the tart, slippery flesh of mangosteen and lychee, is served raw. The juice collected from the pulp during fermentation is mixed with water and sugar to make a cacao sorbet. The chocolate, mixed with spices including cinnamon and tonka bean, is rendered into a satin-soft mousse, studded with cacao nibs for a textural crunch. Then, it’s finally garnished with tuile-like chocolate shards made from cacao powder, flour, egg whites and smoked chipotle pepper.

The skins of the pod are also fermented for seven days with water, cinnamon and star anise into a joyful chicha – a traditional South American brew with a fun effervescence (and light alcohol content — ranging from 3 to 8 percent) similar to that of kombucha. A small glass of this is served alongside the dessert.

In its simplest interpretation, the ‘Cacao Trinitario’ is Chaneton’s love letter to the perseverance of Hong Kong: the chef’s ambition to create Asia’s only cacao bean-to-plate experience emulates his desire to keep growing despite these trying times, something he believes the Hong Kong spirit is founded in.

According to the chef, this new confection is not about showing off his technical abilities or instructing you on what the best way to eat chocolate is. Rather, it presents Chaneton’s personal understanding of cacao, fusing his roots in Venezuela with his sojourn to Hong Kong to celebrate the way his tastebuds have beautifully evolved across his travels.

Joining the ‘Cacao Trinitario’ is a revised edition of Mono’s signature mole – a compelling sauce made of chocolate, eggplant and spices that pairs perfectly with Chaneton’s delectable sourdough and quinoa bread. Using the artisanal chocolate he now creates completely in-house, the mole is both creamy yet dynamic, afforded a tangy kick from its added Korean pepper powder for an Asia-inspired execution.

Both dessert and mole are offered as part of Mono’s dinner tasting menu (HK$1,280 per person) from October onwards.