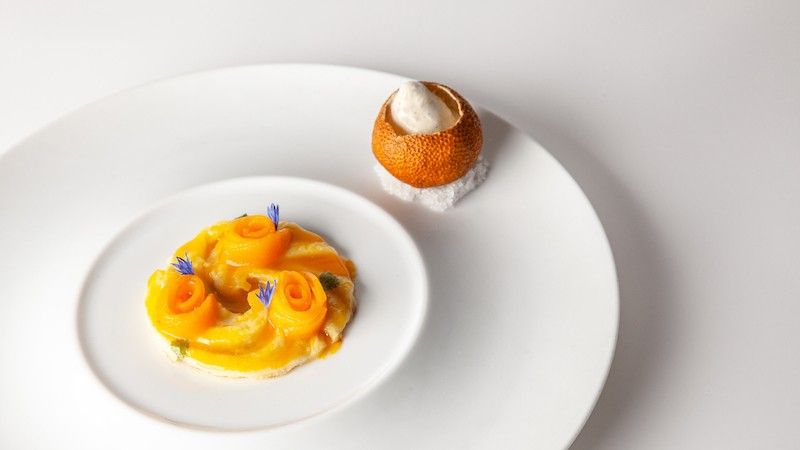 No doubt this past Fourth of July weekend indulgence will have appetites spent; try looking at another slice of pie or a greasy pizza and sloppy hotdog — I dare you. But food is the fuel that keeps the city going, so take a breather to reset and then re-indulge in this week’s latest menus: anniversary celebrations at Club Rangoon (they’re one!) and Cornerstone (they’re two!), a very refreshing (and impressive) ‘Ode to Fruit’ courtesy of chef Vicky’s Tate Dining Room. New Central breakfast spot to frequent from J.A.M. and the arrival of Nespresso Gourmet Weeks to give that morning cuppa you’re currently sipping a brand new way of savouring.

Should your many-times-a-day cups of Nespresso be entirely indispensable, this July to early August, don’t just sip the coffee, enjoy it as part of your daily meals instead. Nespresso Gourmet Weeks arrives in Hong Kong, ideated as part of the brand’s effort to prove that roasted coffee beans can be better beyond a brewed mugful. Through the assistance of notable local chefs, Nespresso’s Professional’s Origins range, in particular the first certified organic coffee, Peru Organic, is ingeniously refashioned as innovative plates upon limited-time tasting menus.

Nespresso Gourmet Weeks will run from 12 July to 8 August, with two of the participating eight restaurants spotlighted weekly:

Perched on the bustling corner of Hollywood Road, Cornerstone, the cosy contemporary Australian bistro within chef Shane Osborn’s The Arcane Collective is celebrating its second anniversary. Beloved for its modern plates, the all-day dining venue has put together a limited-time run of an Anniversary Menu — three courses of Cornerstone’s absolute signatures, those that succinctly captures the restaurant essence. A sampler of what’s to come: beurre blanc white asparagus with shavings of fresh truffle, red prawn tartare and pan-fried stone bass. Grab a reservation; available from now through to 10 July.

A beautiful ‘Ode to Fruit’ from Tate Dining Room

Coming off previous volumes of eggs, rice, soy sauce and tea, the latest in chef Vicky Lau’s library of seasonal single-ingredient lunch menus at Tate Dining Room: Ode to Fruit. A dedicated showcase of the everyday produce in expert sweet and savoury plates presented in six chapters: Aggregate, Drupe, Berry, Pome, Nuts and Legumes — each a reflection of a distinctive fruit category. A teaser: Aggregate, a spotlight on fruits grown from a merger of ovaries, in this case, Japanese strawberries, is a savoury parfait served in a stunning tall-stemmed glass with yoghurt espuma, a dollop of caviar atop marinated sweet shrimp and strawberries in neat parfait-style layers. While Pome, for fruits with a ‘core’ of several small seeds, casts the aubergine as main character with Chinese-style crispy tofu in a pool of kumquat-laced grenobloise sauce. It’ll be a wonderful afternoon of rediscovery with the summer’s favourite produce. Available only for lunch (12-2:30pm) on Fridays and Saturdays.

Mark this newest spot for the most important meal of the day — re: Central office crowds. J.A.M., is offering a new breakfast menu on weekdays from 8 to 11am from three of its concepts. From SiFu, a Cantonese classic courtesy of Ying Jee Club’s sous-chef Cheung Kin-Ming, century egg and pork congee with premium soy-sauce fried noodles, while Singaporean Uncle Quek whips up a stir-fried rice noodle rolls and homemade kaya toast. And from Vietnamese spot Moi Moi, hearty shredded chicken pho and a Vietnamese sausage, cheese and pork floss croissant. A delicious fuel-up this Monday morning.

A deserving toast to Hong Kong’s only Burmese restaurant — Club Rangoon is turning one this month! For a week from 6 July, the Aberdeen Street haunt is serving up a special set menu topped with signature favourites to celebrate: Ohn No Khout Swel coconut noodles. Burmese national dish Mohinga; A Mel Thar Dan Bauk, Burmese-style beef biryani inspired by chef Nelson’s grandmother and made with wagyu beef cheek; and Kyout Pazun Hin, Burmese lobster curry. Pop over, dig in and show some love to the convivial space by Common Abode; Club Rangoon has overcome an endless set of trialing hurdles since its opening, including launching during the peak of the pandemic.

Keep spirits high and takes your chances in daily Samusa Parties from 4pm to 11pm too, for all-you-can-eat serves of the tasty triangular packaged snacks.

New Eats Nespresso Cornerstone tate dining room Club Rangoon J.A.M. The Arcane Collective
Lorria Sahmet
Editor
After two years writing in luxury retail, Lorria now covers food and drink happenings in Hong Kong. When not taste-testing for the best fries in the city (shoestring, always!), find her cosied up at home skimming through Netflix or nurturing baby plants in her indoor greenhouse. She is happiest by the ocean with a giant fishbowl-glass of Aperol Spritz.
Food Drinks Culture Living Hong Kong
Sign up for our newsletters to have the latest stories delivered straight to your inbox every week.