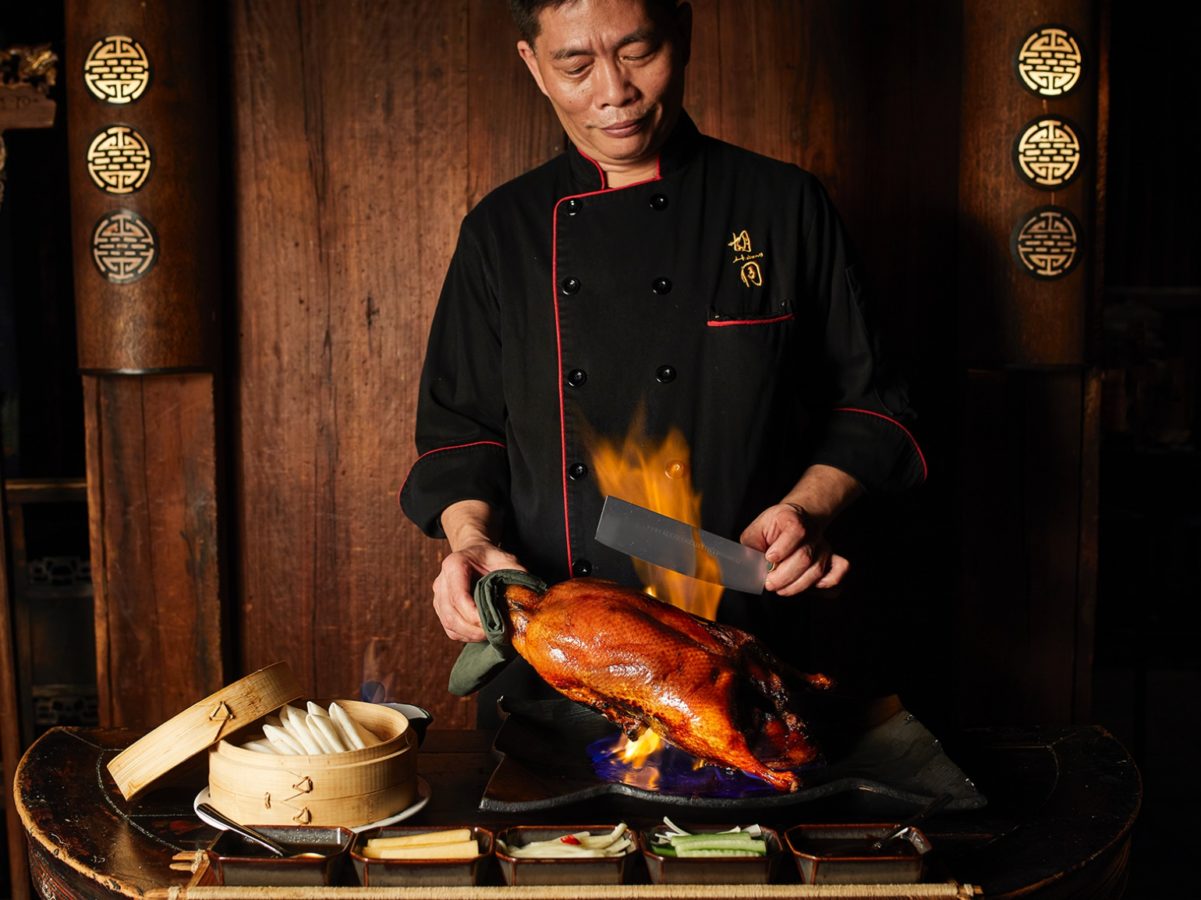 As temperatures start to lower, it’s only natural we’re helping ourselves to heartier plates — if not to celebrate that all-American holiday around the corner, then at least to chase away the doldrums before we hit peak festive season. If you’re looking for pure decadence to brighten up your day, this week’s roundup of new eats will have it: Think Peking duck, fired up before your eyes; a whiskey pairing dinner; and not just one but two limited-time caviar menus tailored for true connoisseurs.

Who isn’t a fan of Peking duck — with its winning combination of crisp, fatty skin and deeply flavourful meat? The Chinese imperial court staple now gets a theatrical spin at Hutong at One Peking. Head of barbecue chef Martin Mak has aptly added a Sichuanese twist to the traditional recipe — marinating with northern Chinese ingredients and air-drying for 36 hours to result in perfectly crisp skin. It’s then roasted for 40 minutes before being doused in Chinese rose wine and rum and set alight — lending an extra smoky flavour and intensifying the peppery aroma of Sichuan green chillies — not to mention an extra dimension of drama. The duck is priced at HK$818 whole and HK$418 for a half portion. Pair it with two new cocktails — the Peking Treasure (HK$148), a duck fat washed cocktail featuring Hennessy VSOP; or the Golden Orchard (HK$138), a lighter spritzer featuring apple cider, sherry wine, elderflower liqueur and topped with Veuve Clicquot Champagne.

When: Every Wednesday until the end of December 2020

What better as an accompaniment to a gut-busting feast at Henry steakhouse than a healthy pour of whiskey? Partnering with Kinahan’s — a 241-year-old brand known as ‘the pioneer of Irish whiskey’ — Henry is offering a three-course dinner menu to go with the distillery’s Kasc Project Whiskey. These are intriguing liquids made in hybrid casks, each constructed from a mix of five different types of wood to result in rich, unusual flavours.

Priced at HK$1,100 per person, the menu includes a generous slate of Henry favourites to share. Highlights such as the cold smoked hand-cut steak tartare, bone-in USDA ribeye, charred corn with harissa as well as desserts to split, including the chocolate fondant with pretzel milk ice cream. To pair with each course, guests will also get to sip on a Kinahan’s whiskey sour, Kinahan’s Hybrid Cask and Original, both served neat, and an Irish coffee to end — the perfect pairing with the decadent desserts.

Gourmet distributor Waves Pacific has partnered with sommelier consultancy Somm’s Philosophy and David Lai’s restaurant Neighborhood to offer a one-night-only caviar and wine tasting dinner, spotlighting five different types of caviar by N25 Caviar. All of N25’s caviar is sourced from Yunnan’s cleanest and purest waters, where they rear older sturgeons who are then able to offer sturdier and healthier caviar eggs — making it possible to age the caviar for longer without the need for preservatives. From prized Kaluga X caviar, used by some of the most decorated chefs in the world, to the Amur variety aged for an extended period for three to six months, guests will get to taste the nuances in flavour along with an array of undoubtedly exceptional wines. The menu is priced at HK$1,500 per person before wine pairing. Reservations recommended.

Whisk is no stranger to guest chef collaborations, but this time, chef de cuisine Oliver Li partners up with The Old Man’s Nikita Matveev for a luxurious eight-course Kaviari caviar and cocktail extravaganza (HK$1,588 per person). Available for two nights only, the ‘omakase’ dinner spotlights some of the season’s prized ingredients jet-fresh from Fukuoka such as sawara (Spanish mackerel) or fugu shirako (blowfish milt) — all enriched with Kaviari caviars in Kristal, Oscietre Prestige and Sturgeon White varieties. The food is paired with four unique beverages that perfectly encapsulate the cocktail wizardry that has consistently landed The Old Man its prestigious place among Asia’s and World’s 50 Best Bars lists the past couple of years.

WHISK New Eats Hutong Neighborhood henry
Evelyn Lok
Managing Editor
When not trying out the latest beauty and wellness trends, Evelyn is likely enjoying a perfectly balanced negroni or exploring some of Hong Kong's best new places to eat and drink. At Lifestyle Asia she covers everything from the biggest events in town to interviews with Hong Kong specialists, with topics spanning art, food and drink, health, tech, and travel.
Beauty Wellness Events Art Drinks