This week, as we gear up for several days of Champagne-soaked parties, VIP events and world-class dining, we’re throwing caution to the wind and indulging our appetites with decadent food products: From fat-streaked Ibérico ham to rich and buttery tuna, nothing’s off the table. Here’s where to hunt down a truly decadent meal this week.

For the love of Ibérico 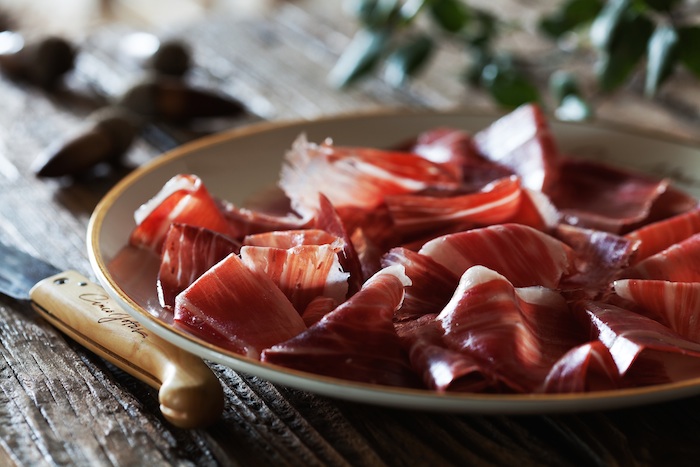 There’s no shortage of delicious food products that hail from Spain — think meaty Cantabrian anchovies, sweet and smoky piquillo peppers and sharp Manchego cheese — but perhaps the most coveted of them all is pure, acorn-fed Ibérico ham, bearing a distinct nuttiness and decadent fat marbling. One of the top purveyors of this prized product is Cinco Jotas, which has produced some of the world’s finest hams for the past 139 years. In fact, Cinco Jotas is one of the few to achieve Black Label certification, identifying the 100% pure breed status of their pigs: meaning acorn-fed, free-range with large grazing pastures, and cured for at least 36 months.

This is some of the finest Ibérico you’ll ever try (our mouths are watering just thinking of the glistening red strips interspersed with streaks of sweet-salty fat); thankfully, the brand has officially launched in Hong Kong, and is now served exclusively at a few select restaurants around town. To get a taste, head to La Rambla, where chef Ferran Tadeo is using Cinco Jotas exclusively in dishes such as the panko-crusted jamon croquetas filled with creamy béchamel and Ibérico. Want to put out a platter for your next party? You can hunt down Cinco Jotas at Great Food Hall and SOGO — although be warned, this premium food product doesn’t come cheap.

Spring has arrived, which means any Japanese restaurant worth their matcha salt will be revamping their sushi sets and omakase menus to reflect the changing of the seasons. Over at the newly relocated Sushi Hiro in Tsim Sha Tsui, there’s a smoked bonito on the omakase menu that’s worth a trip alone: The ruby red fish is expertly sliced by sushi maestro Masashi Suzuki, and lightly seared in the style of “tataki” for a smoky, deeply savoury flavour.

The string of sushi that follows displays the same exacting standards: soft, fat-streaked otoro tuna, bright orange tongues of sea urchin furled in a taut cylinder of crispy nori, and blushing, buttery otoro draped over a thumb-sized mound of rice. Every piece tastes freshly plucked from the sea, rounded out with grilled and hot items such as lightly battered sakura shrimp in a refreshing spring tempura — another sensational dish — and decadent chanwanmushi topped with sea urchin and salmon roe. With Sushi Hiro now offering tiered set tasting menus (starting from HK$980 for the Sakura Course), this cross-harbour gem is well worth a visit for those in need of a sushi fix.

An anniversary celebration at Maison Es

Hong Kong’s lightning-quick restaurant scene means it’s often hard to make time to revisit old favourite restaurants in light of trendy new openings and flash pop-ups. This month, fans of chef Esther Sham’s Maison Es — a contemporary European restaurant which ties in complex technique and creative twists — will want to revisit the restaurant in honour of a very special occasion: the third anniversary of Maison Es and, more significantly, the 10th anniversary since chef Sham left a modelling career in order to pursue her passion for food.

The decision has served her well: Sham’s cooking is thoughtful, well-presented and refreshing, often combining unique ingredients for a border-pushing, cross-cultural take on classic dishes (last time, we were particularly impressed by the tuna poké with wasabi ice cream). This month, the special anniversary menu heads to Japan: a 4-course tasting menu (HK$688) featuring dishes such as Hokkaido scallop ceviche with honey yuzu dressing, grilled short ribs, and foie gras tamago custard. There’s also a 6-course menu (HK$988) which includes the bacalaos confit with uni spaghetti, infused with “wok hei” from a quick flash in the wok versus the traditional toss in the pan. Wash it down with the sake margarita (HK$138), a light and fruity sake and orange concoction served with a rose petal for Sham’s signature feminine touch.

Hong Kong New Eats Dining Restaurants Maison Es what to eat best omakase Spanish restaurants la rambla by catalunya cinco jotas sushi hiro esther sham sushi omakase
Leslie Yeh
Editor in Chief
Having worked as a lifestyle editor for almost 10 years, Leslie is thrilled to be writing about the topic she loves most: wining and dining. When she's not out pounding the pavement for the latest new restaurant opening or tracking food trends, Leslie can be found at home whipping up a plate of rigatoni vodka and binge-watching Netflix with a glass of Sauvignon Blanc in hand.
Dining Restaurants Food Trends Drinks Travel

The best beach bars and restaurants in Hong Kong