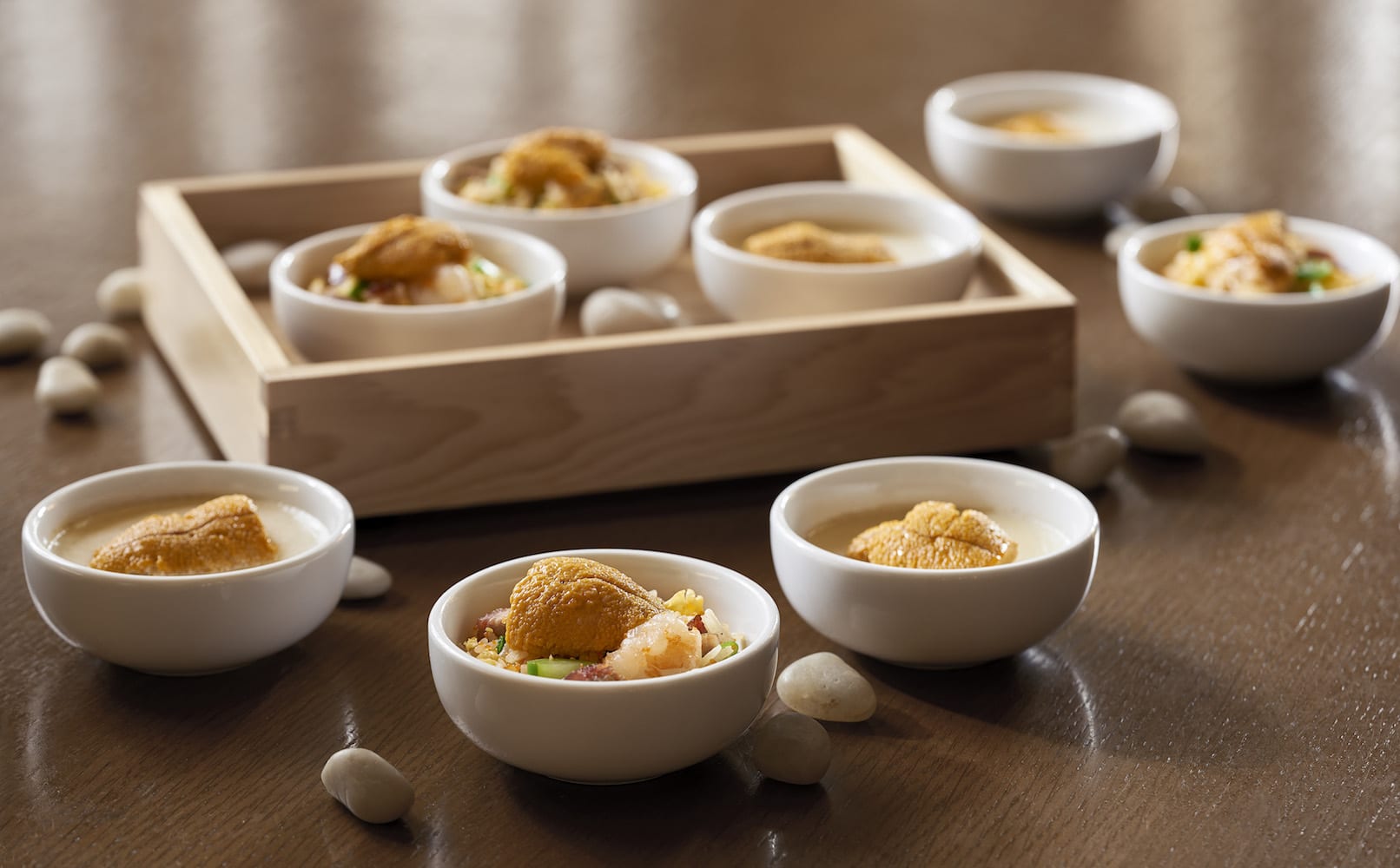 There’s no ingredient that sparks the epicurean passions of Hong Kong foodies quite like sea urchin, the so-called “edible gold” of the sea that’s as ubiquitous on Instagram feeds as cheese tea and katsu sandos these days. Combined with the expensive Périgord truffle — hailed as winter’s ‘black diamonds’ — the two ingredients make this week’s New Eats fit for dining royalty. So grab your gold-plated fork, tuck a starched napkin into your collar, and get ready to indulge in these edible treasures.

Taste the “edible gold” of the sea Cafe at Hyatt Regency TST will be serving up an ample dose of briny and sweet sea urchin at its all-day buffet, with a number of uni items to complement the signature fresh pastas, pizzas, curries, antipasti and seafood rotation. For the new spread, Chef de Cuisine Chung Wai Yau has chosen to showcase the red sea urchin variety harvested off the British Columbia coast of Canada; often larger in size, they’re prized for their intense meatiness and creamy texture. The yellow-orange lobes will appear in the form of fresh sushi, with sea urchin temaki and sea urchin gunkan sushi made to order; infused in a white wine cream sauce to dress poached Boston lobster; and steamed with egg whites in a smooth custard dish made with a umami-rich stock of dried kelp and bonito. The oceanic treasure also gets a turn in fried rice with tobiko and barbecued pork, and crafted into an innovative uni ice cream dessert spiced with yuzu ginger. Sea urchin dishes are available from March to mid-June; buffet priced at HK$648 per adult, HK$324 per kid from Mon–Thurs; HK$708 per adult, HK$354 per kid from Fri–Sun and public holidays. From the sea’s most prized ingredient to that of the earth’s — Écriture will be bringing us a taste of the elusive Périgord truffle this season in a sensational Winter Black Diamonds menu, available through the end of March. With the pungent black truffles currently at their peak — instantly recognisable by their strong aroma and taste — the two-Michelin-starred French restaurant’s 6-course truffle degustation showcases the ingredient alongside Asian delicacies such as Japanese flower crab, sea urchin and Wagyu beef. Curated by Executive Chef Maxime Gilbert, dinner hinges on the versatility of the ingredient, from its juxtaposition to sea urchin in the “Uni” course with chicken liver custard and black truffle foam; to a more nuanced pairing in the ‘Turbot” course featuring the delicate fish in a black truffle wrapping. Steamed flower crab gets an earthy and aromatic hit with truffle and lobster foam; while “Bamboo” shoots are composed as a layered mille-feuille with Chinese leeks and truffle. Finally, dessert wraps up with the chocolate soufflé tart with generous shaves of the aromatic tuber. The Winter Black Diamonds menu is available from now until 31 March, priced at HK$2,488 per guest plus 10% service charge.

The art of lunch at Bibo Weekend lunches are getting an elegant revamp courtesy of Executive Chef Nicholas Chew at Bibo, the restaurant best known for embracing the cross-section of art and cuisine. Praised for his innovative take on French cuisine at the now shuttered Serge et le Phoque, chef Chew has since taken over the helm at Bibo, presenting a brand new weekend menu to showcase his technique-driven French-Japanese cooking. Newly launched are two seasonal menus: the “3 Steps” (from HK$438 plus 10% for 1 Entrée, 1 Plat, 1 Dessert) or “5 Steps” (from HK$588 plus 10% for 2 Entrees, 1 Plat, 2 Desserts), with optional wine pairings and champagne free flow.

From the entrées, enticing new dishes include the eggplant with quinoa and miso; celeriac with uni, ink and lardo; and seared scalloped with haddock and coconut. Abalone (HK$120 extra) gets a turn in the pan with tangy capers and crumbs; while stunners such as octopus with beets, meringue and stracciatella, and wild pigeon with rice, mussels and peas round out the mains. Guests willing to dish out an extra HK$180 can opt for the Wagyu Miyazaki supplement on a bed of pommes purée with ikura roe and olives, while the meal ends on a decadent note with your choice of dacquoise ice cream, baba au rhum, chocolate ‘trio’ or a premium cheese platter.

New Eats Uni sea urchin hyatt regency tsim sha tsui hyatt regency tst
Leslie Yeh
Editor in Chief
Having worked as a lifestyle editor for almost 10 years, Leslie is thrilled to be writing about the topic she loves most: wining and dining. When she's not out pounding the pavement for the latest new restaurant opening or tracking food trends, Leslie can be found at home whipping up a plate of rigatoni vodka and binge-watching Netflix with a glass of Sauvignon Blanc in hand.
Dining Restaurants Food Trends Drinks Travel

Living
27 Questions: Yenn Wong, CEO & founder of Jia Group
Beauty & Grooming
Achieve peak summer glow with Chanel’s latest Les Beiges collection
Food & Drink
These are the tapas we can’t get enough of at newly-reopened 22 Ships
Style
A hundred rare vintage clocks by Cartier are going under the hammer this month
Travel
LSA Curates
Travel
Lifestyle Asia launches LSA Curates, a slate of exclusive experiences for our readers
Travel
Explore the surreal region of Spitsbergen with Quark Expeditions
Travel
Step into an urban oasis with Praya Palazzo’s flexible stay offer
Travel
Trisara is offering exclusive vouchers for your next luxurious vacation
Sign up for our newsletters to have the latest stories delivered straight to your inbox every week.