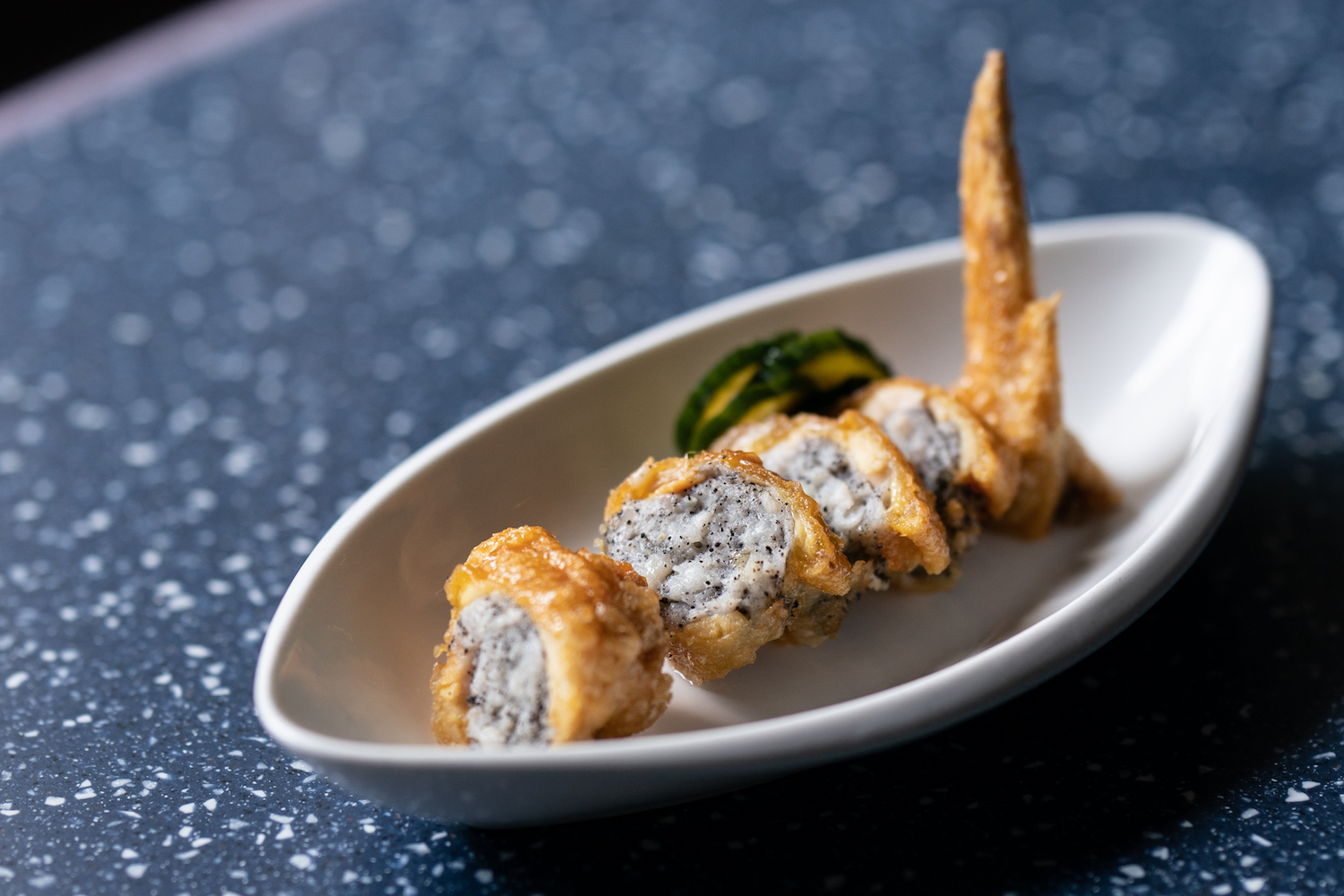 As we head into August, you’ll want to take advantage of the myriad menus around town making use of prime late-summer produce. From a sensational new wine pairing menu at May Chow’s Happy Paradise (trust us, it’s delicious), to chilled somen noodles at Zuma and caviar-topped Cantonese eats at Above & Beyond — here are three new menus to check out this week.

While the buzz may have died down from May Chow’s Asia’s Best Female Chef 2017 win, and Little Bao’s original SoHo shop may have sadly served its last pork belly bun, Happy Paradise’s new summer menu is proof, if anything, that Chow is still at the top of her game. SoHo’s LGBTQ-friendly mecca for hip and cool late-night dining is cranking up the flavours this summer with a series of new dishes, available both à la carte and as part of a new wine pairing menu (featuring, unsurprisingly, a number of underrated regions and winemakers).

Available for HK$880 (including wine!), the seasonal summer menu sticks to Chow’s ethos of reinterpreting Chinese cuisine in playful ways while dialling up the flavour: from crispy kuruma shrimp tossed in briny Chinese olive vegetables (to be consumed head, tail and all), to stuffed chicken with a cuttlefish-paste filling perfumed with black truffle. The addictive dishes continue with deep-fried cauliflower with fried garlic, scallion and bottarga; and braised beef check humming with the backdrop of Sichuan peppercorns in a luxurious red wine sauce. Cap it off with Happy Paradise’s cheeky take on a ubiquitous Hong Kong street snack: sourdough egg waffles dunked in a bottarga dip, paired with a lovely Chardonnay from Shanxi’s Grace Vineyard that’s smooth and ripe with tropical fruit flavours.

Chill out at Zuma

With the mercury rising in Hong Kong, perennial favourite Zuma has launched a selection of seasonal summer dishes designed to help beat the heat. Showcasing treasures of the sea — think plump oysters, briny sea urchin and more — Zuma’s new dishes are inspired by Japan’s tradition of cold noodle dishes, from chilled somen with sea urchin, grated ginger and wasabi, to Japanese oysters with Asian dressing. Follow it up with two sharing plates which benefit from an infusion of smoke from the binchotan grill: a crisp tomato salad with roasted eggplant and ginger, and Japanese aubergine roasted until fall-apart tender.

Zuma is well known for its creative desserts — the new summer creation takes inspiration from the tropics, with a roasted pineapple and lychee sundae topped with crumble and coconut ice cream. At the bar or on the outdoor terrace, diners can enjoy a pre- or post-prandial cocktail: The Fujian combines mint-infused Bulleit bourbon, fuji apple, sherry caramel, lemon and kakigori shaved ice; while the raspberry and passion fruit martini is a mouth-puckering mix of vodka and tart fruit. For a Japanese-leaning tipple, don’t miss the Geishi smash — a refreshing combo of Belvedere vodka, cucumber, shiso and yuzu.

New chef at Above & Beyond

Across the harbour at Hotel Icon, Executive Chef Chi Ki Wong is settling into his new appointment at signature Cantonese restaurant Above & Beyond with a brand new à la carte menu. Regulars to the sky-high restaurant will be pleased to find a number of new additions to the menu, from stir-fried tiger prawns with preserved plum sauce to stir-fried Australian M9 Wagyu beef tossed with brown garlic. New vegetable dishes include the wok-fried mushrooms with lily bulb, asparagus, and black fungus presented in an Instagrammable crispy basket.

Elevate your dinner with the new Oscietra caviar menu featuring France’s leading caviar brand, Sturia. With its subtle saltiness, the caviar helps bring a pop of flavour to dishes such as braised garoupa roll and winter melon in pumpkin broth, and wok-fried scrambled egg whites and crab meat — each served with 15 grams of the exquisite roe. In addition to new dishes, hungry diners can tack on signature offerings, from the popular dim sum menu paired with award-winning teas, to mains such as wok-fried lobster and prawns with tangerine peel.

New Eats Hong Kong Restaurants Hong Kong Dining asia's best female chef may chow happy paradise new menus
Leslie Yeh
Editor in Chief
Having worked as a lifestyle editor for almost 10 years, Leslie is thrilled to be writing about the topic she loves most: wining and dining. When she's not out pounding the pavement for the latest new restaurant opening or tracking food trends, Leslie can be found at home whipping up a plate of rigatoni vodka and binge-watching Netflix with a glass of Sauvignon Blanc in hand.
Dining Restaurants Food Trends Drinks Travel