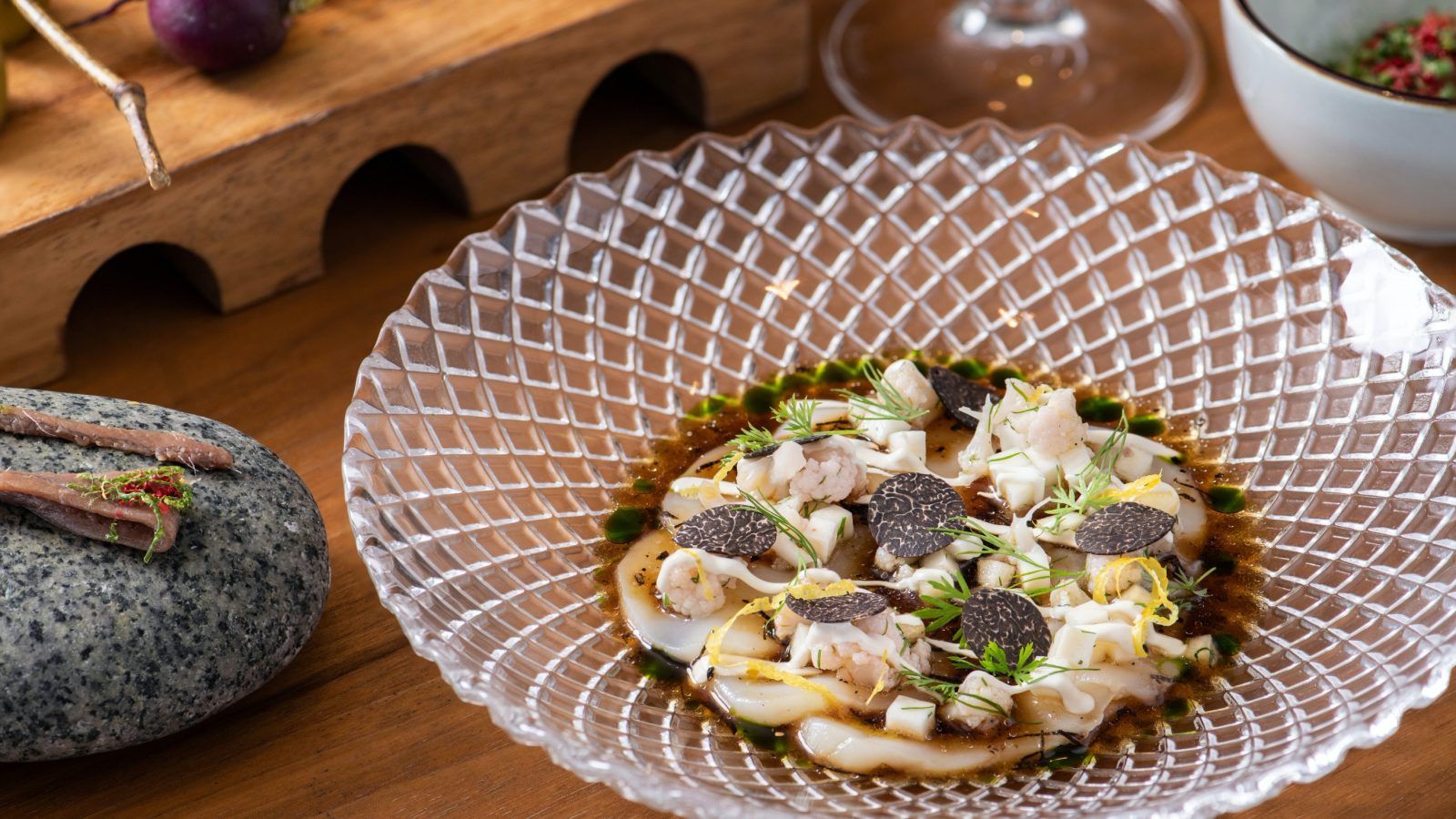 Where to eat in Hong Kong this August 2022

Lazy days are still very much ahead in this month of August. Soak up the sun, snooze all your morning alarms and savour some very delicious food with this month’s new openings.

It’s been unbelievably scorching hot in Hong Kong, with the back-to-back, week-long sunny spells that have brought us to the “feels like 46°C” zone. So if you were pining for a quick exit — someplace cool; someplace by the sea; someplace with A/C — we hear you. Apparently so does this month’s collection of new openings, which takes us straight to basically one destination: The Mediterranean. The cornucopia of French, Spanish and Italian cuisine is spread across four precincts across the city, each with its own take on the region’s light, bright coastal fare. It’ll be like quadruple the European getaway — and no need for quarantine.

With all the warm hospitality and exquisite selection of ingredients, it’s no surprise that Basin, the newly opened venue in Central’s hip new Foco, is named after the Mediterranean. In particular, it hones in on three cuisines from the balmy region — French, Spanish and Italian — with a larger focus on the local health-conscious eating habits, or the Mediterranean diet, where a focus is lent to highlighting the natural flavours.

Ideated by industry veteran Erik Kirakozov, a Georgia-native who previously managed Pirata Group’s portfolio of restaurants, and Valencia-born chef Antoni Bernabeu, Basin is set to serve a variety of refined upscale dishes with humble cooking, some of which are flavours Bernabeu grew up enjoying — zucchini flower with goat cheese, walnuts, tuffles and acacia honey is one such dish. Others include Rubia Gallega prime rib, seared off in the Josper charcoal oven, classic Caesar salad prepared table-side, along with lighter serves of smoked sardines in a traditional ajoblanco sauce and akami crudo with chive oil, dried tomato, capers and plum vinegar.

Adding a brand new facet to its wholesome Mediterranean dining experience, Asaya Kitchen extends its dining concept with the addition of Glasshouse, a refined, elevated edition of fresh, coastal-inspired cooking. In this new iteration of Italian-born chef Fabio Nompleggio’s cooking, a specific focus is placed on the ingredients, with majority of the organic produce sourced from local farmers, fisheries and food artisans. One that Asaya is particularly fond of is a partnership with Sai Kung-based Shun King Fisherman, who supplies seasonal catches to the hotel all year round.

As for the menu, expect a range of light and bright Mediterranean flavours in the five-course dinner tasting menu. The current rotation emphasises on flavours suited to the summer heat, from langoustine club sandwich with langoustine tartare and Kristal caviar to homemade cavatelli, a seafood dish of Mazzancolle tiger prawns, sea urchin foam and Sumac spices; Patagonian toothfish prepared with carrot emulsion; and smoked stuffed olives with tuna tartare.

A continuation of the extensive wellwellwell concept that opened in Pacific Place early this year, Jǐng, named after the Chinese character “䭘”, adheres to the brand’s larger discourse of celebrating Chinese culture. It’s a sensory dining experience that gestures towards Chinese culinary customs, more notably with the traditional round table seating, along with nods towards ancient inventions and tales of notable legends, specifically those from the Tang Dynasty.

The intimate 10-seater dining room is a part of the unique dinner experience, with a fully transformative room of sounds and visuals that changes as the tasting menu progresses. As for the eight-course set, it weaves a fantastical narrative of ancient tales. The story of Yang Guifei, one of the four famed beauties in China, is told via a lychee lobster dish; while the Emperor’s passion for music is presented in a duck and pear dish with the fruit carefully simmered, steamed, slow-cooked and chilled, as an ode to China’s first-ever royal performing arts and musical academy, Pear Garden in Chang’an, where Chinese opera was born. Other inspirations include the famous Tang Dynasty poem “In Love with the Song of Spring”, Chinese poet Li Bai and the Taoists accidental creation of gunpowder.

Set against the panoramic backdrop of Victoria Harbour, the aptly named The Bayside will likely feel like a holiday around the Mediterranean — it’s what inspired the concept from Silver Oak Group, also behind notable names, Quiero Más and Gaylord. To continue the coastal theme, the spacious 6,000 sq ft. dining room is styled by Hernan Zanghellini in hand-painted mosaics and terrazzo tables that wholly befits the Mediterranean-inspired menu that travels from Spain all though Greece, France and Italy. In the kitchen is head chef Javier Perez and executive chef Gary Batra who consciously works with a premium list of Southern Europe ingredients in the creation of ceviches, tapas and homemade pastas.

It’s not so much a new opening but a grand, much-anticipated reopening for Yucca De Lac (雍雅山房), a renowned, celebrity-favourite — named for time-honoured Cantonese cuisine — that’s been around since 1963. They have since moved from their original picturesque Ma Liu Shui location in northwestern Sha Tin, once upon a time featured on TV screens by way of My Intimate Partner (1960), Untraceable Evidence (1999) and The Unforgettable (2001).

At Tandoori Bites, it’s a dedicated menu of fragrant sub-Continental fare that spotlights the versatility of the specialty fitted brick tandoor oven. It’s also a well-lit stage for the wide range of spices and ingredients of Indian and Himalayan origin, something founder Harry Bisht knows a thing or two about from running his Indian grocery store, Saffron, located directly next door. The Indian native has lived in Hong Kong for the last 32 years, providing free meals for those in need from his shop. Now, he serves the wider public with the cuisine of his home-country alongside chef Bharat Negi. Tandoori Bites signatures include cuisine staples of lamb biryani, Goan fish curry, paneer tikka and samosa chaat, alongside revamped specials of spice-marinated, deep-fried tandoori chicken momo and chicken tikka naanza, an Indian take on pizza with chicken tikka, mozzarella and fresh naan finished in the tandoor oven.

Breeze Bistro’s seaside Kennedy Town location was an intentional one; the airy, all-day dining space was created with the balmy Mediterranean in mind. That’s why within you’ll discover a similar Mediterranean-forward menu of fresh, vibrant cooking by head chef Chris Gill, who brings with him 15 years of experience in preparing French fine-dine and casual bistro fare. The dishes here, of both local and imported ingredients, are an easy approachable selection of lighter appetisers to hearty mains, and includes lobster linguine, whole grilled seabass, bone marrow with ox tongue and butternut squash risotto. Dogs are welcome!

From Central Market’s gourmet grocer Chef’s Market comes Chef’s Cuts, a dining experience that uses all of the neighbouring market’s fresh premium produce including 12-day, dry-aged Black Angus steaks, sustainable seafood and artisan ingredients. The menu at the restaurant ambit is curated by Irish-born Angelo McDonnell, a veteran chef with over 30 years of culinary experience, working in hotels across Switzerland, New Zealand, California, Toronto and Manilla. He will be cooking up the likes of smoked pastrami Reuben with slow-cooked smoked beef sandwiched between truffle brie; smoked salmon and abalone carpaccio, highlighted by Korean abalone and Norwegian salmon; and lobster and tiger prawn roll.

The Sheung Wan neighbourhood adds yet another Japanese skewer spot to its directory, with the arrival of boutique brand Chi Yawaragu. Specialising in the wider spectrum of kushiyaki, which includes skewers beyond the usual chicken to include pork, lamb beef and seafood as well as seasonal vegetables, the menu features a Chef’s Exclusive Set of eight curated skewers for a comprehensive tasting menu of its selection. Of course, you’ll find the classic rotation of yakitori (grilled chicken), featuring local yellow chicken prepared in an extensive “Beak to Tail” menu, along with seasonal dishes like chicken broth udon and small appetisers. Another notable order, the selection of rare wagyu beef offal cuts.

Hong Kong Brunch Dining Hong Kong Restaurants Hong Kong Foodies Hong Kong Food hong kong food guide New restaurants in Hong Kong
Lorria Sahmet
Editor
After two years writing in luxury retail, Lorria now covers food and drink happenings in Hong Kong. When not taste-testing for the best fries in the city (shoestring, always!), find her at home obsessing over tableware and attempting a fruit garden on her tiny bay window. She is happiest by the ocean with a giant fishbowl-glass of Aperol Spritz.
Food Drinks Culture Living Hong Kong
Sign up for our newsletters to have the latest stories delivered straight to your inbox every week.