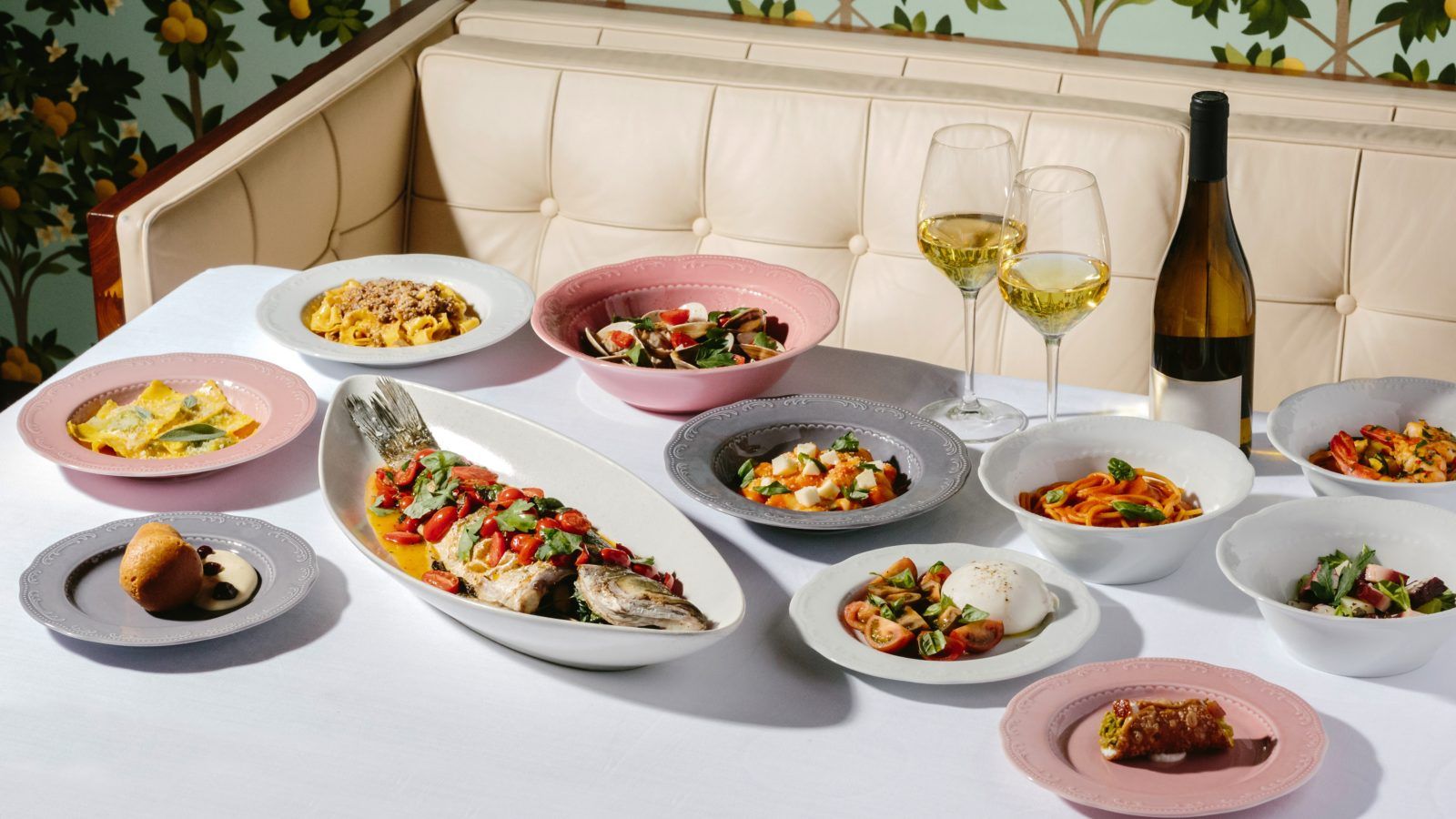 After three very slow months, the city’s F&B scene is finally back alive once again. Here are all the new restaurant openings this May.

The lack of sunny beach weather aside, there are still a few good things to look forward to this May: Bars will be back open on 19 May, extending hours up till 2am. Restaurants are hopeful in extending dining hours until midnight. As for where to continue endless celebrations for these relaxed rules? Hong Kong’s latest restaurant openings. There are lots of new names thrown in the hat this month, so choose wisely — or not, and pay a visit to them all.

All the new openings in Hong Kong this month:

The red-and-white marble-clad interiors designed by COLLECTIVE Studio with arched entryways and terracotta bricks to replicate a rustic aljibe –– a recurring motif in Spanish architecture — has also pledged to work closely with World Central Kitchen, a non-profit organisation that works to provide meals to disadvantaged communities affected by natural disasters.

The satisfying sense of comfort of Indian cuisine is not lost at Central’s new Chutney Tandoor House, a modern Indian restaurant that remains true to the classic serves of sizzling tandoor plates and fragrant subcontinental spice. At its Wyndham Street location, Chutney Tandoor House, named Chutney after the beloved condiment of the cuisine, is bright, bold and vibrant in washes of warm honey with gold fixtures — much like the menu itself. A full gastronomic experience through various Indian regions, the menu combines both traditional and innovative culinary traditions in dishes like Raj Kachori, a North Indian crispy ball filled with mixed chaat and pomegranate; Tandoori Octopus, slow-cooked for 12 hours then fired up in the tandoor oven; Chicken 65, a south India-inspired dish of fried chicken marinated in mixed herbs and curry leaf; and Lamb Shank Nalli Nihari, a 18th-century dish that was once prepared in the royal kitchens during the Mughal Empire.

Ramato is a rotund tomato variety typically grown in the region of Puglia. Ramato is also the name of the new casual Italian eatery by JIA Group, which takes over the very familiar address on 208 Hollywood Road. Renewed, redressed and sporting a redesigned menu by Antimo Maria Merone of Estro, the modern new space, touched up with bold wallpapering, a hand-painted mural of Napoli by Elsa Jeandediu and various print and canvas works scattered all over, is a destination of rustic, home-style cooking inspired by the Italian recipes of Merone’s nonna. Warm traditional Southern Italian dishes fill the menu, with hearty serves of bruschetta, homemade pastas, including a dry spaghetti made with none other than the ramato tomato, and generous sharing portions seafood dressed in fresh Mediterranean herbs. The menu concludes with a comforting list of familiar sweets: Sicilian cannolo, limoncello baba and the classic as can be, tiramisu.

The quintessential staple of New York’s food scene — old-school Jewish delis — finds its merry way into Hong Kong’s Kennedy Town at Mendel’s Delicatessen. Conceptualised by the team behind Shady Acres, Mendel’s, an cool-casual all-day cafe, promises to serve a honest, authentic menu of beloved NY deli-style serves from classic Reubens to Everything Bagels to a true-to-form chicken matzo ball soup cheerfully named “All Chicken Matzo Ballin’ Soup”. There’s, of course, coffee, teas and a deliciously selection of light sodas and juices, which you can make extra strong with an added boozy shot.

Carbon Brews, at its buzzy new Wyndham Street locations, is very much a gastropub as it is a taproom, which is what you probably know it for. There’s an impressive 28 taps behind the bar, but’s that’s another story (Where to Drink). As for being a gastropub, the menu here is the creation of Sean Yuen, previously of Four Seasons’ Caprice, and features a range of Mediterranean-inspired dishes that touch on elements of fermentation (for a link-back to its beers) and also happens to be the kind that go hand in hand with a full pint. Honed in on impeccable techniques that reach beyond typical pub grub, Yuen dishes out the likes of White Bait Frites, deep-fried Canadian Agria potatoes tossed in Old Bay seasoning with homemade fermented hot sauce mayo (pair with Crazy Rich Lupulin or Staying Alive); Crazy Rich Beer Cheese, a grown-up edition of nachos with whole-grain sourdough smeared in melted cheddar and taleggio (pair with Kokomo, Little Rich Lupulin or Baby Rich Lupulin); fried chicken drumettes that are soaked and marinated in a spice brine; and a pan-seared lamb belly that’s slow-cooked at 68 degrees, charcoal-grilled with dukkah and vadouvan (Southern French curry spice mix) and served with chipotle puree.

By its name, KIN is a food hall; by concept, it’s a first-of-its-kind dining experience that spans across a physical food hall to the KIN App and KINShop that’s hoping to revolutionise the way we eat in greener, more sustainable ways. First and foremost in this ambitious plan is the brick-and-mortar location, KIN Food Halls, located in Taikoo Place’s Devon House with over 18,000 square-foot of space from an 18-tap bar to a multi-purpose kaiten. Home to over 200 recipes from 45 creators that range from Michelin-starred chefs to reputed names, KIN Food Hall prepares each and every order fresh with traceable, ethical ingredients. Dishes include Richard Ekkebus of Amber’s spicy tomato and watermelon salad, Yardbird’s Furai-O-Fish Sando, Honbo’s Deli’s Sukiyaki, Emmer’s Thai Chicken Pizza and a Shrimp Roe Fish Maw over Rice by rising culinary talent Nero Ip of NeroKitchen.

The second portion of the KIN concept: the KIN App, the dedicated application to order the curated dishes mentioned above. Engineered with AI technology, the KIN App is able to customise a food “playlist” that promotes a selection of foods and dishes based on your preferences, much like as it would in a Spotify playlist. Finally, KINShop is the destination for catering, home groceries and larger orders, allowing for the same high-quality meals at KIN Food Halls to be transformed into premium delivery sets and meal kits so that eating — and cooking — at home is a more meaningful and less wasteful experience.

Founded by Matt Reid, Jonathan Yeoh, and Malcolm Wood of Maximal Concepts, KIN is hoping to serve 1 million dishes within 12 months, all within the accessible price of HK$100. Learn more about the concept here.

Sawadee Chef is a Thai restaurant. But rather than keeping with tradition, Sawadee is helmed by renowned Chinese chef Ronald Shao with over 40 years of experience in preparing Sichuan, Guangdong, Beijing and Shanghai cuisine for a brand new vision on Thai cuisine. The menu here is, naturally, guided by a Chinese cooking techniques with varying levels of spice that still stays true to authentic flavours. Shao cooks up a contemporary menu of familiar signatures, including spicy minced pork belly with perilla leaf; sliced fish in Thai spicy and sour soup; claypot rice with assorted fish and mushroom; and a specialty selection of Thai barbecue from whole squid to eggplants.

There’s no denying the simple happiness of a grilled cheese sandwich, and 17-years trained chef Jason Lloyd agrees, which prompted him to open up his very own grab-and-go hangout Chubby Papa’s Deli dedicated to the all-time comfort deli-style artisan sandwiches. The ingredients are generous, often stuffed to the brim within the fresh-baked brioche ends, and the menu is a heaping of favourites from breakfast staples to all-day classics. Come for a bite of any of the grilled cheeses and tuna melt, or indulgent American-style Reuben and Philly cheese steaks.

Over at the stylish M+, newly opened ADD+ is the easily understandable concept of “All Day Dining”, with the following plus-sign an indication of the new, constantly evolving ideas the grab-and-go eatery hopes to introduce. Set against the expansive views of Victoria Harbour, the similarly stylish space of 10,000 square feet is led by executive chef Daniel Chen, who prepares a menu of pan-global dishes that range from iconic Hong Kong snacks to classic Chinese dim sum. Mid-afternoon favourites of club sandwiches — made with a staggering list of 18 ingredients — and egg waffles sit alongside inventive dishes of familiar flavours, including stir-fried spaghetti, inspired by ADD+ owner Dr. Peter Lam, tossed with barbecue pork in goose oil; satay hot pot with beef and stir-fried rice rolls; and the Hainanese chicken elevated by a homespun broth.

The heart of an authentic Italian meal is the deliciously fresh produce and warm, hospitable atmosphere. Two benchmarks checked off by new modern Italian eatery Cantina, opened in the former location of the Police Officers’ Mess at Tai Kwun. Carrying on the convivial ambience through authentic Italian flavours and generous sharing plates, the menu at Cantina is designed by chef Luca Schiavone. At the vibrant new space, designed with lemon trees, full-length windows and pitched ceilings, it offers a casually comfortable venue to sit back and enjoy Schiavone’s inspired take on cicchetti, Venetian-inspired small bites, with dishes like Gnocco Fritto, fried dough with parma ham and stracchino cheese, slow-cooked baby octopus and Sicilian red prawn carpaccio. For larger orders, the menu highlights meaty mains of Milanese breaded veal cutlet and flamed salt-baked sea bass, as well as pastas, risottos and homemade thin-crust pizzas in renewed iterations such as squid ink dough.

The designation of an izakaya indicates an expansive coverage across almost all variations of Japanese cuisine, something that Decree Izakaya by T, sister restaurant of premium omakase restaurant Decree by T, is set to demonstrate with its modern menu of over 80 dishes ranging from yakitori, grilled seafood, udon, maki rolls and street snacks. Of the extensive range, look out for the selection of tuna dishes, flown in fresh from Japan and prepared at Decree Izakaya in four different ways; Kanimiso, grilled crab paste in a whole crab shell; and the fresh abalone of the day, prepared with the everyday seasoning of salt.

Hong Kong New Restaurants where to eat in hong kong koi Carbon Brews Agora Chutney Tandoor House Mendel's Delicatessen Ramato KIN Food Halls Sawadee Chef Chubby Papa's Deli ADD+ Decree Izakaya by T
Lorria Sahmet
Editor
After two years writing in luxury retail, Lorria now covers food and drink happenings in Hong Kong. When not taste-testing for the best fries in the city (shoestring, always!), find her cosied up at home skimming through Netflix or nurturing baby plants in her indoor greenhouse. She is happiest by the ocean with a giant fishbowl-glass of Aperol Spritz.
Food Drinks Culture Living Hong Kong
Sign up for our newsletters to have the latest stories delivered straight to your inbox every week.