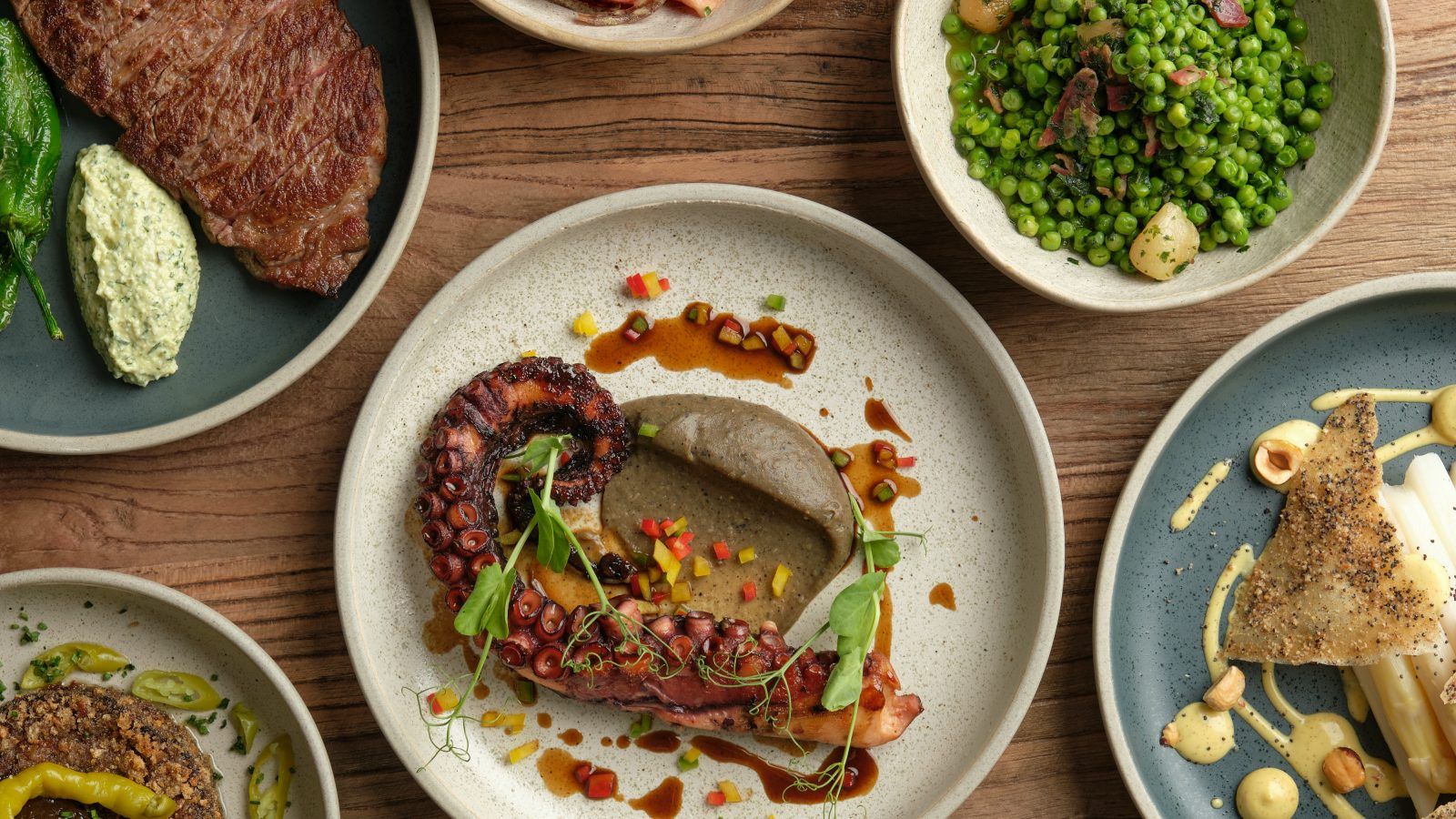 Where to eat in Hong Kong this July 2022

It’s July! Summer! Get into full holiday mode minus quarantine hotels with wine bars that transport you to France, cafes that offer Southern California cool and fresh new venues that whisk you away to Japan.

I’ll admit: It’s not easy keeping up with deadlines during summer. Especially during smack-bang, middle-of-the-year July, where the sun is shining, the sky is blue and longer days practically call — no, beg — for full days by the beach. A missed opportunity if otherwise! The next best thing after lazing by sparkling blue waters? Air-conditioning, and long afternoons on alfresco rooftops sipping on a favourite glass of chilled something. Maybe that’s a mimosa, an Aperol Spritz, or maybe even a glass of fine wine, which you’ll happily discover that and more with a brand new crop of fantastic wine bars and restaurants opening this month. Close that laptop!

The name Edward Voon is not a foreign one. Quite the contrary, the award-winning Singaporean chef, previously of Le Pan, is better known for his contemporary French cooking of rich, complex flavours. Now stepping out on his own, Voon introduces his very first fine-dining venture, Auor. The restaurant’s namesake — pronounced as “hour” — is a nod towards the passage of time, a theme that’s threaded throughout Voon’s creatively thought-out menus. Available in either the signature Six Rounds (six courses) or the Menu Dégustation (eight courses), each of the dishes represent Voon’s past, present and future journey as a chef with fresh seasonal ingredients, namely a spotlight on his traditional French training and Asian flavours he grew up loving.

At Lyndhurst Terrace’s newly opened wine bar, Terroirs by LQV, the wines, cheeses, charcuterie and premium list of delectable French fare may seem — and taste — familiar. It’s the latest concept from the French-run, Hong Kong-based group LQV, who brought to the city a new wave of elegant wine-bar-slash-bottle-shops back in 2014, followed by a stream of gourmet fine-foods outposts. In this evolution, LQV is tapping into the world of fine-dining, consciously paired, of course, to its rich portfolio of over 2,000 bottles of biodynamic, organic and natural wines.

Named as a reference to the soil of particular region, “Terriors” refers to LQV’s sense of place, in this case, France, where their wine is produced. Naturally, a distinct French characteristic decorate the space, from the soft terracotta and wood tones of a rural French cottage designed by LC Studio, to a menu of classic French fare. It includes a famous anchovy and onion tart from Nice, popular Croque Monsieur, pâté en croûte made with Noir de Bigorre pork and Maison Samaran foie gras, and fresh bakes of bread and patisserie from the LQV bakery.

The idea at Hong Kong Cuisine is a straightforward, if not familiar, one — dedicated entirely to the showcasing classic flavours of Chinese and Cantonese cuisine. Having just passed its 10 year anniversary mark, the restaurant completes a full overhaul with a brand new look, and a brand new chef in tow. Now helmed by chef Silas Li, a veteran in Chinese cooking following many experiential years as a private chef, Li’s menu assumes a contemporary stance that gestures towards time-honoured Chinese recipes yet practices distinct western techniques, especially in presentation. Transformed cuisine staples include braised boneless duck web stuffed in chicken wings; bird’s nest, typically a dessert, featured in a savoury course with winter melon, roasted duck and sea cucumber; and classic Chinese dishes like steamed cod finished with a western touch — wrapped in miso fish mousse in a zucchini beef consommé with carrot bubbles.

Marrying two much-adored luxuries of the culinary world, HUSO, located in The Pottinger Hotel, is an elegant dining room dedicated to champagne and caviar. It’s even named after one of the largest breed of caviar-producing sturgeon found in Eurasia. Here, the premium selection of caviar — sourced by experts from across various regions including Caviar Français known for its pronounced fishy notes — is skilfully worked into a menu of casual French-Mediterranean fare set to highlight each distinct flavour profiles, with a main focus on fresh seafood including oysters and lobsters.

More popularly known for its catalogue of seasonal Japanese produce, city’super is extending its portfolio beyond home kitchens with the debut of their first-ever Japanese restaurant MIKURA. Adopting the same core philosophy of the premium grocer — “crafting a better lifestyle” — the restaurant will serve high-quality ingredients, including four artisan brands that has worked exclusively with city’super: Hakataya Soy Milk by Japanese Tofu Master Sasaki Takao, Yamagata A5 Otome Ushi “Maiden Cows” Wagyu, a 100-year old Meiji era Kayanoya stock and RF1 SOZAI salad known for its premium use of fresh ingredients. These are transformed into signatures upon MIKURA’s menu in dishes like Soy Milk Shabu Shabu made with Hakataya soy milk and “Maiden Cows” wagyu. Paired to the exquisite menu of premium Japanese produce is a sake list of over 70 variations from all over Japan, curated by city’super’s own sake team.

As for the menu, it takes after the street food culture of Central Europe, namely countries of Germany, Hungary and Poland, and features the likes of Polish cold cuts — the first and only in Hong Kong — among larger plates of grilled meats, including a Hungarian pork chop tomahawk finished in a 300-degree charcoal oven; crispy pork knuckle; spicy chipotle marinated pork ribs; and a special, non-pork mention, Szyniec’s grandma’s Silesian mashed potatoes. Keeping to the Central Europe dining culture, Porkcentric will serve a selection of craft beers of international labels as well as bottles from local brewery partner, Moonzen.

A very sunny SoCal addition to Hong Kong’s SoHo district, Melrose Coffee is hard to miss with a façade awash in a very recognisable shade of millennial pink. It’s inspired by, of course, by Los Angeles’ colourful Melrose Avenue with a photogenic interior purposely designed to imbue the distinct, cool, Californian spirit in wide-striped seat pads of beachside sun-loungers, light timber and terrazzo tiling. The menu is similarly a light, brunch-forward selection of Californian breakfast-style serves: spinach bacon frittata with capsicum, zucchini and mushroom; ricotta and prosciutto toast in a light honey lemon sauce, and its not really a true LA experience without a mention of a buzzy food trend, in this case, croffles, the flaky croissant dough waffles, served as churros. As for the coffee, sample fresh-brewed mugs of single-origin Honduras beans.

TANGRAM, set to open at Wan Chai’s stylish new hotel AKI Hong Kong – M Gallery carves out an unconventional vantage on the city’s beloved Japanese cuisine. Introducing “Japas’, a Japanese-inspired take on typical Spanish tapas, the restaurant distills various international flavours into a single culinary experience — hence the name Tangram, which takes after the eponymous puzzle. Executive chef Keith Chan’s “Japas”, including the likes of sous vide wagyu beef in ponzu sauce and yaki onigiri with poached egg, is served with Japanese bento boxes fitted with daily special “omakase” appetisers that rotate seasonally and a global selection of dishes that range of red snapper with chorizo to classic eggs Benedict and Chinese congee and dim sum. It’s an around-the-world sharing concept of light snacks, and as Chan explains, “Guests can create their own menu, in effect composing their own Tangram.”

The grassy lawns outside the newly opened Hong Kong Palace Museum sets the perfect scene for a French-style café that overlooks the coastline — it’s why Bohème Restaurant Group chose the Victoria Harbour location for its latest venture. Crepes & Bakes is a casual Brittany-inspired, all-day dining eatery dedicated to a menu of two classic French serves that’s evident in its name: fresh bakes, including a bread basket of croissants, sourdough tartine and baguette sandwiches, served alongside pastries and sweets, and the beloved French street snack of thin wrapped pancakes. Crêpes come in two variations here, sweet with traditional flavour combinations of lemon & sugar, salted butter caramel and nutella banana, while savoury, labelled under “Buckwheat”, features the usual Ham & Cheese, 4-Cheese and renewed international-inspired serves, including “Italian” of mozzarella, tomatoes and oregano, and “Indian” with lamb curry and coriander.

Online cake boutique Soulgood Bakery, founded by Hong Kong-native Anjaylia Chan, is moving into its first brick-and-mortar this month. Known for its creative takes on the traditional San Sebastian basque burnt cheesecake, Soulgood reinvents the creamy slice with Asian-inspired touches, including mochi, mango, taro and matcha, while keeping health-conscious recipes in mind. At the new K11 Musea location, signature flavours are debuted at the pretty pastel-dipped shopfront, including the popular Mixed Berries Basque Burnt Cheesecake, adored for its molten core and the Crème Brûlée Taro Basque Burnt Cheesecake, touted as a Hong Kong first. Others on the menu, a new Cake Jar series that jam-packs layers of cake amongst rich jams, chocolate and cereals.

The Bo Innovation name might not be new — neither is its two Michelin star designation — but the menu, the interiors and the address have seen a complete overhaul. Now situated in Central’s H Code, the new Bo Innovation continues chef Alvin Leung’s unique “X-treme” Chinese cuisine with an all new, 10-course tasing menu, “The Masterpieces”, breaking down traditional Chinese culinary customs with global influences in an all-new space — one that combines Hong Kong’s unique cultures of tradition and modernity.

Leung shares, “The global pandemic forced me to slow down over the past few years and gave me the time, headspace and inspiration to reimagine a completely new menu for Bo Innovation. This is the first time in years a menu has been wholly designed by me and it deserved a new space, one that better reflected the evolution of Hong Kong.”

Hong Kong Bo Innovation New Restaurants where to eat hong kong Tangram Auor Terroirs by LQV Hong Kong Cuisine Porkcentric HUSO Melrose Coffee Soulgood Bakery MIKURA Crepes & Bakes
Lorria Sahmet
Editor
After two years writing in luxury retail, Lorria now covers food and drink happenings in Hong Kong. When not taste-testing for the best fries in the city (shoestring, always!), find her at home obsessing over tableware and attempting a fruit garden on her tiny bay window. She is happiest by the ocean with a giant fishbowl-glass of Aperol Spritz.
Food Drinks Culture Living Hong Kong
Sign up for our newsletters to have the latest stories delivered straight to your inbox every week.