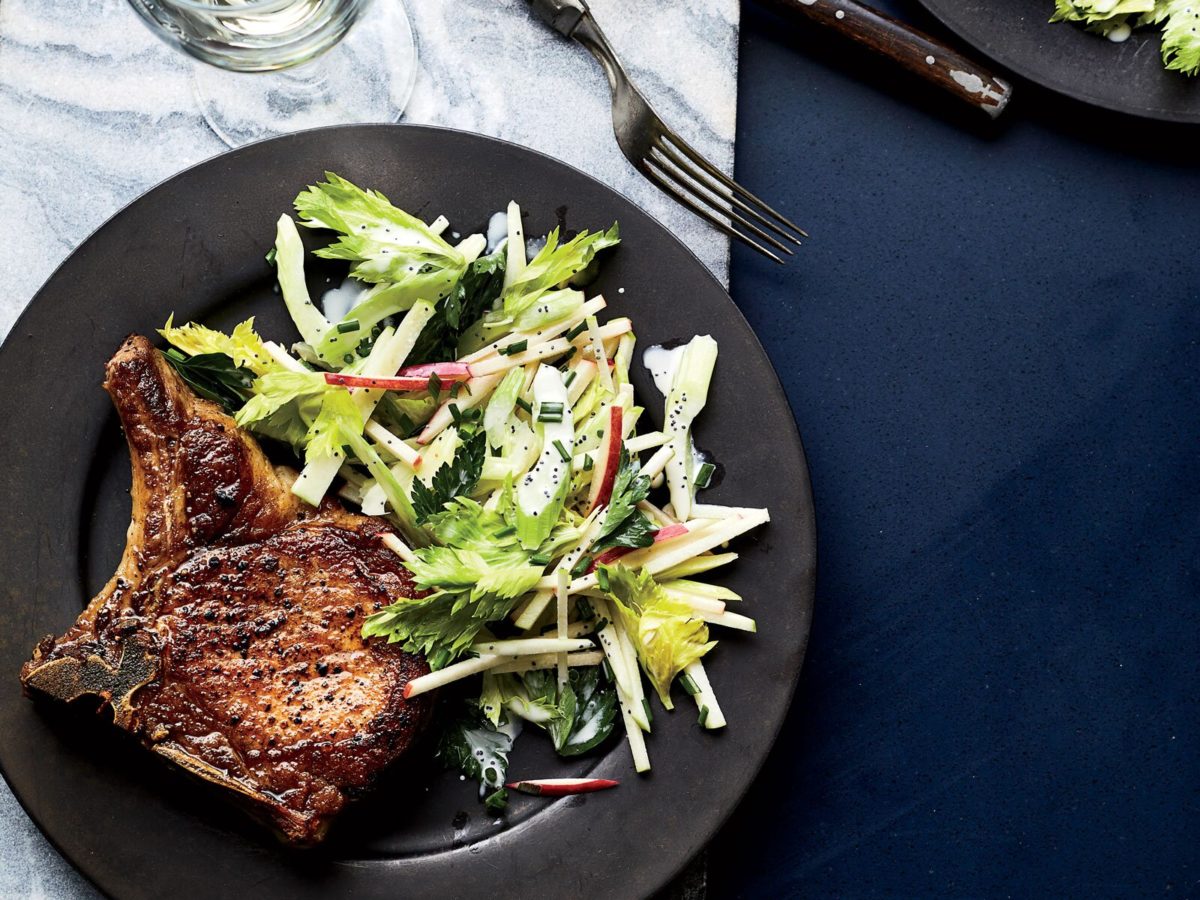 This season brings some of our favourite produce centre stage, including pumpkins, figs, and of course, apples. In an episode of Mad Genius, Food & Wine Culinary Director at Large Justin Chapple uses three different varieties in an apple slaw — or “apple slawce,” as he calls it — served with juicy pork chops. Pork chops and applesauce are a classic combination, and this is his reimagined version of that pairing — a perfect transition meal between summer and autumn. The whole dish is ready in just 30 minutes.

Read on to find out how to make it.

Prep and Cook the Pork Chops

Justin’s recipe calls for 10-ounce bone-in rib-cut pork chops, which should each be about one inch thick. Season both sides of the meat with kosher salt and black pepper, and if there’s a ring of fat all around the edge of a chop, Justin recommends scoring it in a few spots so the meat doesn’t curl when it hits the hot skillet.

To start, heat canola oil in a large cast-iron skillet over medium-high and then add the pork chops. Let them cook for five to six minutes per side, turning occasionally. Justin recommends using tongs to pick up the chop and sear the sides. Ultimately, the pork chops should be browned and register 135°F (57 degrees Celsius) when an instant-read thermometer is inserted into the thickest part of the meat. Let them rest for a little while while you prep the rest of the meal, and note that the internal temperature will continue to rise.

As the pork chops cook, Justin quickly prepares the slaw dressing. Grab a large bowl and add the mayonnaise, apple cider vinegar, poppy seeds, and hot sauce. Give it all a whisk, season with kosher salt and black pepper, and you’re good to go.

While the pork chops rest, get started on the three-apple slaw. You’ll need the three apples, of course — Granny Smith brings tart flavour, Honeycrisp adds crisp texture and sweetness, and Gala also lends a nice texture as well as a “little bit of a vanilla essence,” Justin notes. He demonstrates a trick for cutting them up and coring them (hint: grab your melon baller), and then stacking the slices to julienne them into thin sticks.

In addition to the julienned apples, you’ll need four inner celery stalks (thinly sliced on the bias), celery leaves, chopped fresh flat-leaf parsley, and snipped fresh chives. Add all of the prepped ingredients to the bowl of salad dressing and toss to combine, making sure the apples are coated.

To serve, plate your pork chops and then pile on all that slawce. If you’d like to pair wine with the meal, we’d recommend an apple-citrusy Alsace Riesling.

“This is irresistible,” Justin says. “The pork chops are so juicy, but then they’re even juicier because those apples just sort of burst in your mouth with all this tart and sweet and savouriness. Get out to those orchards, pick some apples, and make yourself some slawce.”