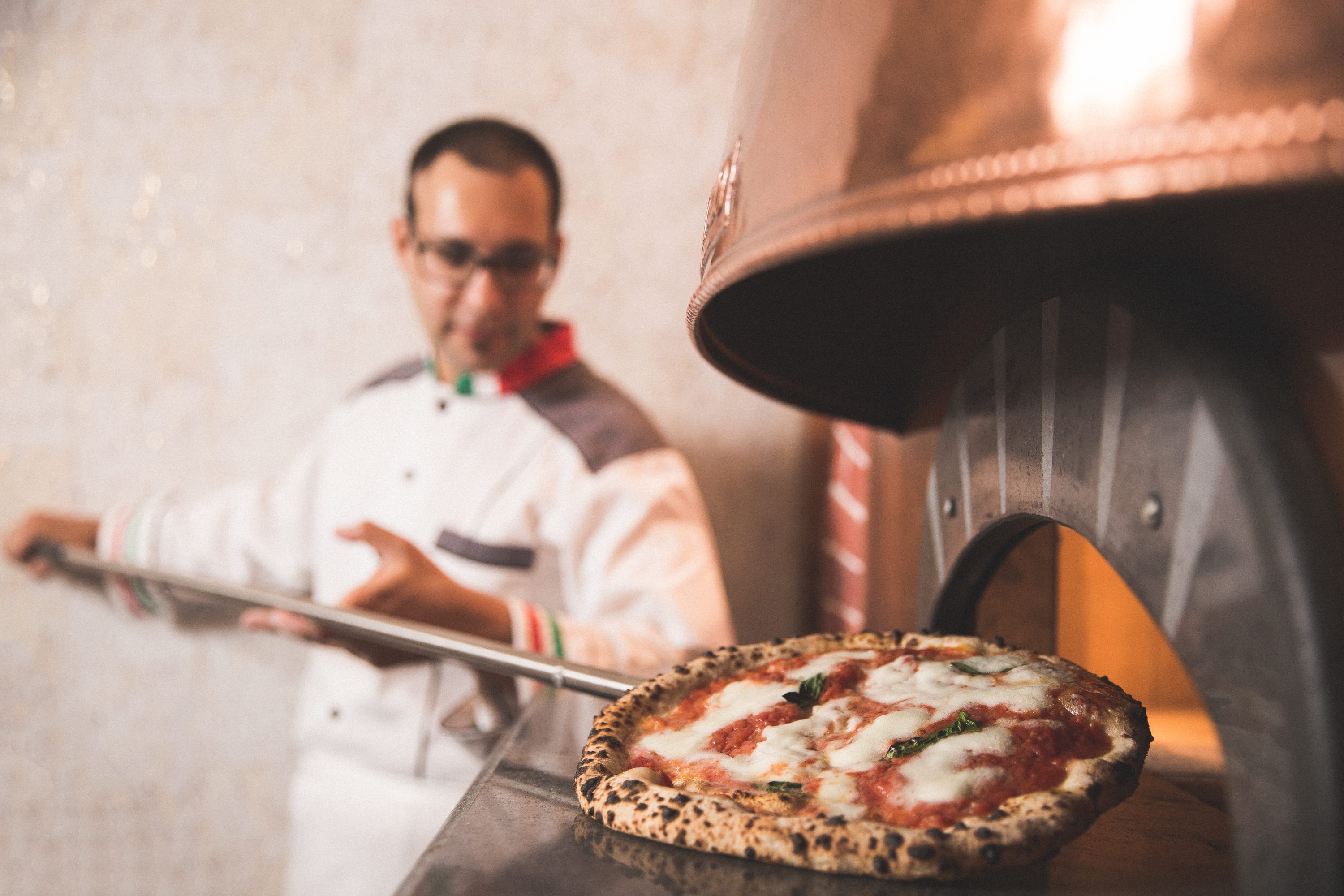 The Grand Lisboa hotel is old Macau’s shining, lotus-shaped beacon, with its high-ceilinged chandeliers and gilded elevators. It’s also a hub for Michelin-starred restaurants, with the three-starred French fine-diner Robuchon au Dôme and contemporary Cantonese restaurant The Eight leading the way; followed by the one-starred steakhouse, The Kitchen. With that, it’s perhaps the last place you’d expect to find a rustic Italian restaurant, but with newcomer Casa Don Alfonso joining the mix since last November, we’re honestly glad for the update and change of pace.

Casa Don Alfonso is a revamp of southern Italian fine-dining restaurant Don Alfonso 1890, which opened at the Grand Lisboa in 2007 and closed recently. The Don Alfonso name itself has roots in the original two-Michelin-starred restaurant in the small coastal village of Sant’Agata sui Due Golfi, Italy, known equally for its outstanding dishes paying homage to local ingredients, as well as for its historic wine cellar which easily holds thousands of bottles. This particular fact is no different at Casa Don Alfonso: You’ll find that the wine list is a magnificent tome with more than 16,800 world-class labels included.

Despite the success of Don Alfonso’s fine dining venture, the appetite from Macau visitors for a more casual eatery has made way for a homier vibe. But that doesn’t take away from the unique relationship between the Macau restaurant and the Italian original in its little village looking over Sorrento. Because of the long-held partnership, we learn, Casa Don Alfonso is able to fly ingredients such as San Marzano tomatoes and fresh mozzarella straight to Hong Kong daily.

With the newly revamped restaurant opening just last November, Don Alfonso has packed away its gilded plates and pared down the opulence for a more intimate experience that looks and feels as if you’re dining right in the chef’s own home.

Classy, timeless and elegant, the wooden parquet floors match with simple white and crystal tableware and silverware, with sturdy dark wood furniture accented by bright pops of red and yellow on the cushions and light fixtures. The sheer amount of space between tables and privacy offered by each large booth is almost jarring compared to Hong Kong standards, and it’s nice to be able to stretch out our legs and not hear anyone else’s conversation.

We arrive to the restaurant just in time for the antipasti lunch semi-buffet (HK$310 for a 3-course lunch set), which includes a fantastic spread of classic Italian appetisers: think creamy tuna-caper mayo on sliced veal, charcuterie, salads and roasted vegetables, juicy honeydew with prosciutto, and a giant wheel of parmigiano taking centre stage. The zucchini parmigiana slice is brought to life by the bright tartness of tomato, and balanced with the unctuous umami flavour from the cheese. We’re particularly impressed by the quality of the fresh produce, which shines through in the caprese salad with each slice of mozzarella bursting with rich flavour.

We order an extra eggplant parmigiana (HK$120) which is a touch sweeter and softer in texture than the zucchini dish. I prefer the light crunch of the former, but it’s balanced and satisfying nonetheless.

For mains, our first pasta dish is the highly recommended crab ravioli (HK$180), where four plump dumplings are stuffed generously with crab meat, with more large chunks christening the dish on top. A glossy, buttery shellfish sauce, with the combination of mushrooms and sun dried tomatoes, creates a rich savoury counterpart to the sweetness of the crabmeat, while the ravioli itself is nicely al dente.

Going with a comforting classic, the homemade tagliatelle bolognese (HK$180) is top-notch, with fresh, eggy thick noodles giving fabulous bite. The sauce itself is topped with crispy pancetta cubes for a more interesting texture. It’s amusing to see the server offer freshly grated parmigiano from an almost cartoonishly large silver horn of a cheese grater, but of course, we rarely ever turn down extra cheese.

If anything proves that Casa Don Alfonso has an exceedingly great understanding of Italian ingredients, it’s their pizza. Specifically, the humble margherita pizza (HK$120). The tomato sauce here is unreal, as sweet and fresh as if they were freshly plucked from the vine. But even more incredible is the beautiful dough: a soft and pillowy crust with fantastic bite and delicate crispy char on the sides. It’s thanks to pizzaiolo Sr. Maurizio Ferrini, a Naples native who has been preparing Neapolitan-style pizzas for more than a decade. His technique is to fire up each pizza in the electric Izzo Scugnizzo stone oven at over a thousand degrees, for less than a minute, before it’s checked by chef de cuisine Claudio Favero, who previously led the sister restaurant in Italy.

This rapid-fire process creates a pizza like nothing we’ve had in Hong Kong, where even great pizzas tend to have chewier doughs. With this kind of tasty crust, you don’t need much to adorn it beyond an incredible sauce and simple cheese. The mozzarella itself, we hear, is apparently so fresh — even more so than the kinds used at Don Alfonso 1980 in Italy — that the cheese melts a different way here in Macau’s stone oven: oozy and wet, but without sinking through to render the base a soggy mess, so as to deliver just enough lush and delicate milky flavour to keep you going. The pizza is definitely the star of the show, and we’d go back just to try all the other flavours.

It’s hard to recover from such an enjoyable slice like that, but we also manage to try another signature on the menu, the veal osso buco with saffron risotto (HK$280). The risotto itself tastes a little too alkaline to me, but the fluffy and al dente texture of each grain of rice nails it. The veal itself is lovely, cooked clean off-the-bone tender and with just a tiny sliver of beefy, earthy funk.

To finish off a meal of classic Italian dishes, we decide to go the alternate route to predictable tiramisu and opt for the scaglione (HK$80) — a puff pastry dessert filled with cinnamon cream and topped with sour cherry sauce. I’d only order this again with true cinnamon addicts as the spiciness and tart cherry flavour is a little heavy-handed, but very Christmas-appropriate for the holiday season. All in all, it makes for a sweet and unconventional end to an exemplary Italian meal.

With all our dishes arriving in smooth succession, with automatic refilling of drinks and changing of dirty plates, we have no qualms with the service here. Casa Don Alfonso nicely rounds out Grand Lisboa’s offerings as a mid-range, classy eatery, and we can safely say that it’s the most authentic Neapolitan-style pizza in Macau, if not this side of the South China sea. There’s nothing too inventive here but Italian classics are done to a tee, and whether you’re looking for a pit stop while strolling through old Macau, need a hearty bite after a day at the slots, or are just craving a fresh and ridiculously good pizza, Casa Don Alfonso is going to be a welcoming sight.

Unfortunately what seems to be missing is the lack of lively atmosphere that comes at a cost of the spaciousness and quietness, which lends an air of stiffness to a meal here. If chattering away while eating decadent and comforting foods is what southern Italian home cooking is about, this place hasn’t quite achieved the convivial atmosphere it deserves — but we hope to see this change in months to come.

New Eats: A bovine world tour with Beefbar, 20 new dishes at The Legacy House and more