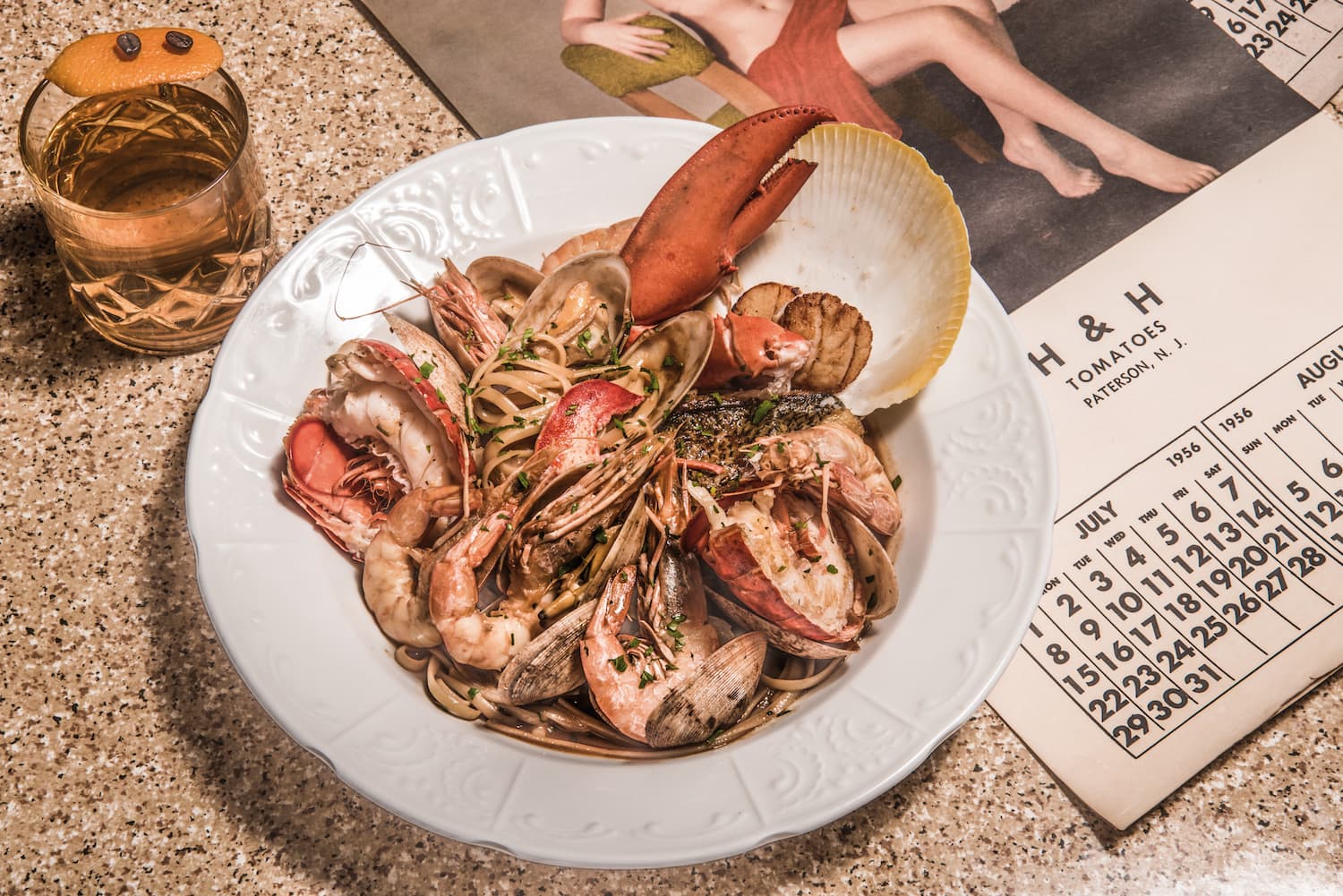 Review: Frank’s revives red-sauce Italian dining in all its glory

Of the many cuisines that Americans have adopted and reinvented over the last century, perhaps none evoke as much nostalgia as the old-school red-sauce Italian cooking that swept through Manhattan in the early 20th century — the pride and invention of second- and third-generation immigrants to North America. From the 1920s to 1960s, restaurants serving this type of Italian cuisine were roaring, raucous spots where red-checkered tablecloths sat under colossal platters of spaghetti and meatballs, veal parm and baked ziti. Many decades later, the restaurants leftover from this era, particularly those huddled around the Little Italy neighbourhood, are mere shells of their former selves — more tourist traps than relics of a golden era in dining.

While many have tried to invoke and recapture the glory of red-sauce restaurants, it arguably wasn’t until 2013 that they were thrust back to the forefront of the collective culinary mainstream with the launch of Carbone, helmed by the power duo Rich Torrisi and Mario Carbone (they’d already explored Italian-American cooking in a small storefront restaurant called Torrisi Italian Specialties). Their superlative version of a throwback red-sauce joint garnered critical acclaim, including one Michelin star, and subsequently made its way to Hong Kong in 2015; with that, we were introduced to colossal (and expensive) platters of spaghetti carbonara, lobster ravioli and veal Parmigiana. Four years later, there’s a new old-school Italian diner in town vying for the appetites of red-sauce enthusiasts — this time with more pared-back portions and prices to match.

Frank’s Italian American is part of Red Sauce Hospitality group (Posto Pubblico, Linguini Fini, Stone Nullah Tavern), whose owners are no stranger to the Italian scene here in Hong Kong — their restaurants having long been synonymous with hearty Italian food served with homespun hospitality. (Group chef Vinny Lauria is now back and forth between Singapore, having recently opened restaurant-bar The Guild there, while Linguini Fini and Stone Nullah Tavern will be rebranded as Fini’s).

Though anchored by classic recipes, their restaurants are modern in décor, from the open-air, farm-to-table vibes of Linguini Fini to the contemporary date-night digs at Posto. At Frank’s, however, the group has dug deep into the archives to present a quintessential throwback to red-sauce joints, complete with tiled floors, heavy curtains, Neapolitan table lamps, shelves stacked with vinyl records and turntables spinning old school tunes from Dean Martin to Frank Sinatra (cue The Godfather and Sopranos references).

But Frank’s doesn’t feel like an inauthentic copycat: The restaurant has been tastefully and thoughtfully curated, somehow meshing New York, Italy and Hong Kong in one. The big neon sign signalling the restaurant at the corner of Pottinger and Wyndham Streets already feels like a permanent fixture of SoHo, while painted lettering on the façade promises antipasti and drinks inside.

The ground floor bar evokes smooth, soulful vibes, with its long bar counter manned by smartly dressed bartenders shaking up a range of classic cocktails (an extended bar menu is served here until 2am nightly). Pass the after-work crowd swishing their martinis downstairs and head up a neon-lit staircase lined with old vintage album covers into a room that transports diners to 1940s New York — from the burgundy walls to mahogany wood furniture and curtained windows offering a peek of Pottinger Street below. Dressed-up waiters play their part in smart black bowties and maroon vests — although the illusion is slightly disrupted by their stoic, very Hong Kong-like service demeanour. (Frank’s doesn’t seem to have accessed the same talent pool as Carbone, where table captains in Zac Posen-designed suits joke and bluster with the swag of old-school Italian waiters).

Like Linguini Fini and Stone Nullah Tavern, the menu here offers exceptionally good value for money: The one-page menu consists simply of antipasti, pasta and secondi (meats and seafood), with every dish clocking in at under HK$250, save for the zuppa di mare (seafood soup) which serves two (HK$588). A stiff drink is necessary to get the meal underway, and both our orders are spot on: a well fashioned martini with a fat Castelvetrano olive speared on the rim, and a Plymouth gin negroni cooled by a giant block of ice. Miniature fried meatballs serve as an amuse-bouche as we peruse the menu, followed by a complimentary platter of gnocco fritto: puffy pockets of olive oil-brushed fried dough entangled in webs of Parmesan cheese, served with a pot of homemade tomato sauce.

That tomato sauce, by the way, is excellent — a harmony of sweet, ripe tomatoes blending with the fruitiness of olive oil, plus a slight hit of acidity, oregano and the jolt of freshly snipped basil. It takes skill to lure this flavour out of a can (you can bet superior San Marzano tomatoes are used here), and the well-balanced, savoury sauce is a workhorse throughout the menu, lifting the flavours of pork meatballs with its sharp tang, rounding out the classic spaghetti, and even hiding inconsistencies in a dish of chicken Parmigiana (but we’ll get to that later).

Your first order should be the pork meatballs (HK$148); slathered in sauce, these baseball-sized boulders are possibly one of the best in town, incredibly moist and juicy, substantial without feeling stodgy. Note that the  taste of garlic is particularly strong, but the bold seasoning holds up well against the onslaught of tangy tomato sauce and grated cheese. From the antipasti selection, we also opt for the baked cherrystone clams (HK$127 for 6 pieces); though small in size, the clams are kept juicy in a blanket of garlic- and oil-soaked breadcrumbs. A small lobe of sea urchin crowns each bivalve, and while seemingly gratuitous at first (is there anything that chefs aren’t slapping sea urchin on these days?), the freshness is effective in cutting through the fattiness of the fried breadcrumbs.

There are six pasta options on the menu here, from a classic spaghetti to fluffy balls of ricotta gnudi, and pappardelle alla vodka tossed with rock shrimp and pancetta in a smooth vodka sauce. We try to go for a lighter pasta with the clam linguini (HK$188), but the dish has a thick coating of oil which threatens to overpower each bite. On the plus side, a punch of herbs and acidity impart good flavours, the pasta is cooked just al dente, and the clams are generous and abundant.

From the mains, the chicken Parmigiana is a beast, offered as a chicken breast at HK$198 or a half deboned bird for HK$238. Our qualms with this dish — the chicken breast isn’t pounded thin enough, rendering it a bit dry, and an odd, almost pasta-dough-like layer encases the breast — are masked by the tremendous topping, the chicken warmed over with tomato sauce and enveloped in a blanket of melted mozzarella, with the appropriate crunch on the crust and caramelised bits of cheese. It’s immensely satisfying despite minor hiccups, and we suspect that the half bird would fare better, with the dark meat improving the overall tenderness of the dish. A side dish of heirloom carrots (HK$68) is nondescript, but worth ordering if you feel like an antidote to the carb-heavy dishes is needed.

After dinner, the server whisks over an eye-catching platter of desserts; unfortunately, we’re due to give back our table back within the hour, and vow to return next time for the enticing fried zeppole and crispy cannoli.

Though not perfect, Frank’s encapsulates much of the charm of old-school Italian restaurants. There’s the list of stiff drinks; sauce-slathered dishes which deal primarily in the trifecta of melted mozzarella, basil and tomatoes; a cosy ambience perpetuated by a nostalgic soundtrack, and a hearty emphasis on meats and pastas hit with enough herbs and acid to avoid the risk of red-sauce overkill. The few mishaps are easy to overlook, made up for by the special atmosphere and the standout value that most still associate with homestyle Italian cooking. And then there’s the sauce itself, of course — that, Frank’s has perfected to a tee.