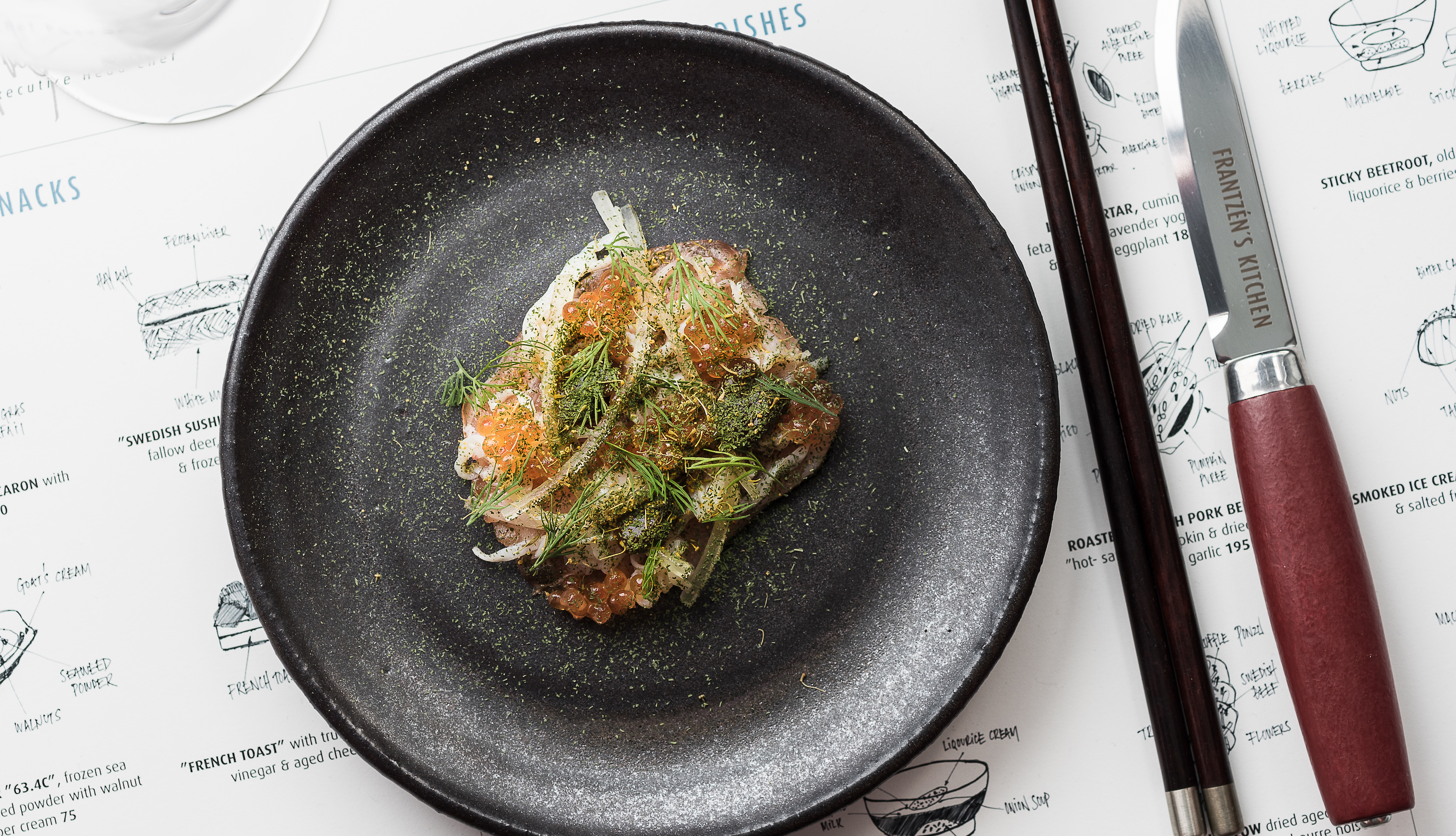 Review: Frantzén’s Kitchen paves the way for a Nordic revival in Hong Kong

Food & Drink
Review: Frantzén’s Kitchen paves the way for a Nordic revival in Hong Kong
Share this article
Next article

White moss. Dried lingonberry. Crab aspic. Kalix roe. You’ve probably never heard of these ingredients before, but they may soon be added to your foodie vocabulary over a meal at Frantzén’s Kitchen, the much-anticipated Nordic spot recently opened by two-Michelin-starred executive chef Björn Frantzén and head chef Jim Löfdahl, of acclaimed Restaurant Frantzén in Stockholm.

A few have tried to bring the Nordic trend to Hong Kong, and while some have failed, we’re certainly hoping that the pedigree of this Michelin-starred team from Stockholm will be enough to show longevity in Hong Kong’s fleeting food scene. With the grand opening taking place this week, the team is enthusiastically prepping their treasure chest of earthy ingredients and sharpening their Mora knives, the razor-sharp Swedish version of a survival knife which you’ll get to wield at the table. If our first taste of the menu is anything to go by, the kitchen seems to be on a confident path to pave a new way for Nordic cuisine here.

As for the space, it’s small and unfussy, seating just three dozen per night (the restaurant is closed on Mondays). There’s not much ambience of note to distract diners, but the hand-drawn menu is enough to entertain on its own, with scientific-looking illustrations of each dish and its various components. The menu is à la carte, letting diners craft their own experience from start to finish. For one person, a few “Snacks,” a few “Dishes,” and one or two “Desserts” is recommended. With portions small and mains averaging around $200, expect to spend upwards of $800 for a full journey through the menu, wine excluded.

Our meal kicked off with the “Swedish Sushi,” a two-bite appetiser that arrives looking like a nondescript rectangle of hay (HK$80). Thin and crispy strands of white moss are weaved together like a basket to represent the rice, while the protein on top is a thin strip of fallow deer from Sweden, fairly mellow and not as gamey as you’d expect. Cep-flavoured mayo and a dusting of frozen foie gras (which tastes exactly like it sounds) finishes off this whimsical bite. It’s unlike anything we’ve had before, and melts fleetingly on the tongue.

The “French Toast,” also from the “Snacks” selection (HK$95), is slightly more hefty: caramelised onions sandwiched between two pieces of toast, spread with a layer of 60-month-aged Swedish cheese and white truffle shavings, also gone in two ephemeral bites. Like other small plates to come, the smell is more pungent than the taste, balancing beautifully on the palate despite being overtly strong in aroma, thanks in part to the sweetness from the aged balsamic.

The roasted Hokkaido scallops (HK$205) were an Asian-inspired light segue into the mains, nicely seared and sitting in a umami-fused “Nordic dashi,” which bears the crystal clear consistency of traditional dashi, but fortified with caramelised dried scallops instead of kombu. An herbaceous spruce oil adds vibrant pools of green around the clear pond, and the acidic pop of fingerling limes rounds out the interplay of sweet, sour, and savoury — typical on a Thai menu, per se, but unexpected and a pleasant surprise within the confines of a Nordic kitchen.

From the “Dishes” list, the cod and grilled chicken are excellent complementary selections: The fish boasts a bright translucent sheen bordering on sashimi, bathed in a luxurious anchovy-infused buerre blanc sauce (HK$230); while the chicken is slow-cooked to a perfect light pink, covered in chopped hazelnuts and chanterelles with a miso-and-Jerusalem-artichoke purée on the side (HK$215). Comprising more familiar ingredients, this dish will be a comforting fallback for those just dipping their toes in Scandinavian cuisine.

There are three desserts on the menu: sticky beetroot, smoked ice cream and the quaint-sounding “cloudberry macaron.” We’ll be back for the other two, but the sticky beetroot may be hard to beat: oven-roasted beetroots cooked for five hours (apparently turned every six minutes to draw out the natural sugars), covered in a cloud of liquorice foam and more of that wonderful aged balsamic (HK$115). As for drinks, the wine list hovers around 5o or so labels, mostly from France (the sommelier is a native Frenchman with possibly the best handlebar moustache we’ve ever seen), including a focused selection of beers that pair naturally with the menu.

With some very strong flavours and a treasure trove of unusual ingredients, Frantzén’s Kitchen may not be everyone’s cup of tea, but there’s certainly enough creativity and originality there to make an impression on Hong Kong’s food scene. And if fermented white asparagus juice and and pine shoots aren’t up your alley, you can always stick with the grilled chicken.

Dining Nordic Restaurants Nordic cuisine Sweden Frantzén's Kitchen Restaurant Frantzén scandinavian food bjorn frantzen swedish food jim lofdahl
Leslie Yeh
Editor in Chief
Having worked as a lifestyle editor for almost 10 years, Leslie is thrilled to be writing about the topic she loves most: wining and dining. When she's not out pounding the pavement for the latest new restaurant opening or tracking food trends, Leslie can be found at home whipping up a plate of rigatoni vodka and binge-watching Netflix with a glass of Sauvignon Blanc in hand.
Dining Restaurants Food Trends Drinks Travel