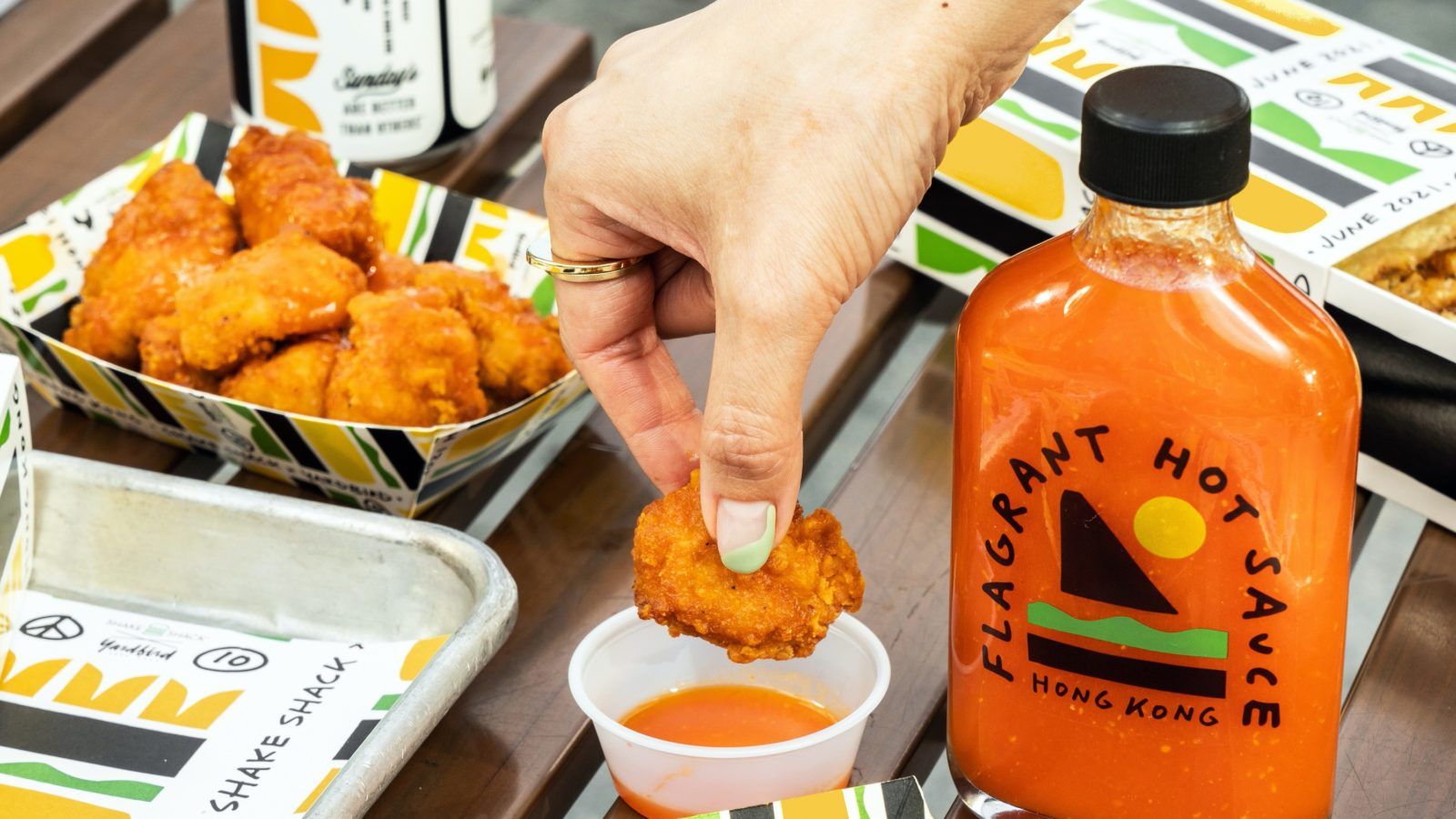 Food & Drink
12 June: Shake Shack and Yardbird partner up for a limited one-day-only menu
Share this article
Next article

Mark your calendars: This is one very limited, very exclusive special you don’t want to let slip. Trendy Japanese izakaya Yardbird has put together a limited-time menu with beloved burger-joint Shake Shack, available on 12 June starting from 4pm, with only 800 servings at the Shake Shack ifc post.

The Shake-Shack-meet-Yardbird collaboration is worth getting excited about. New Michelin star recipient Yardbird, now also a 10-year veteran, has been celebrating its decade-long anniversary with a series of activations featuring various food and lifestyle brands. This partnership with Shake Shack (with graphics created by Cody Hudson for a collectable T-shirt and beach towel) counts as its latest. Meanwhile, Shake Shack has always leaned into recreating its usual suspects through the talents and techniques of culinary experts, with editions from Danny Yip of The Chairman, David Chang of Momofuku and pastry chef Dominique Ansel. Between both brand’s ethos and a budding friendship between Yardbird chef-owner Matt Abergel and Shake Shack culinary director Mark Rosati after a first-meeting in 2018 when the burger-stand first entered the city, it was a menu bound to happen.

12 June just so happens to be also be Global Wellness Day. You know what this means: meditative spas, singing bowl sessions, restorative yoga flows and then a cheeky pick-me-up from Shake Shack after. Whatever counts as your self-care, self-love wellness routine. But, one thing’s for sure — the Shake Shack x Yardbird serves? Extremely satisfying and oh-so-good for the soul. Here’s a deep-dive into the three limited dishes to convince you otherwise:

The shining star of the show. The Chicken Katsu Sando. A Yardbird signature chicken katsu, panko-coated and beautifully deep-fried, is lodged between twin Shake Shack potato buns. The chicken katsu, a fine-mince of local triple yellow chicken and white onions, is topped with Bulldog Japanese tonkatsu sauce with a generous slathering of creamy shredded cabbage slaw. While the potato bun, well, it’s the classic, lightly toasted, soft, fluffy bite that is so well known and loved. Scrumptious. No questions asked.

It goes without saying that Shake Shack’s Chick’n Bites were already a must-order own its own. Now bolder and better, finished with a quick toss in Yardbird’s signature fiery, zesty, tangy Flagrant Hot Sauce (HK$125), it’s a fried chicken bite that can’t be beat. Served in a paper tray of six, but you’ll want to go for more, trust us on this.

There’s something so satisfying about the sonic fizz of a pull-tab opening in summer. The sound of great time to be had. Especially exciting with this introduction to the canned cocktails rota: Shake Shack’s signature Fifty/ Fifty — a half lemonade, half organic iced-tea concoction — swirled and mixed with a delightful splash of Sunday’s whisky. An easy weekend, out-of-the-can drink while basking in the sun. Or, as its served here, in a cooling cup-full of ice. Another great thing about cocktails in a can: they’re easy to collect. Bag a couple of these limited bevvies up and keep it chilled for a tasty sip while cruising on your next boating trip. Thank me later.

Ahead of the launch, we speak to Yardbird’s Matt and Shake Shack’s Mark for more on the new menu and exciting collaboration. In particular, rare insight to the making of the glorious Chicken Katsu Sando:

Why the collaboration between Shake Shack and Yardbird?

Matt: At the core of the Shake Shack business is true hospitality and passion for the restaurant industry. They don’t take themselves too seriously and are open to change and taking chances – unlike a lot of their competitors. It mostly came down to the relationship that we developed with Mark in-and-out of New York, as well as Hong Kong with his team. We really wanted to celebrate in a wide range of ways, especially for our 10th anniversary, and Shake Shack was on board to celebrate with us.

Mark: At Shake Shack, we collaborate with chefs around the world to celebrate our fine-dining roots. Shake Shack was born out of a fine-dining restaurant and we started doing chef collaborations to showcase our chef friends. We have the utmost admiration for Matt and the Yardbird team and could not think of a better way to help them celebrate their 10-year anniversary!

How did you decide on the menu and drinks?

Matt: The idea behind any good collaboration is to merge the two brands, ideas, and style into something that can only be experienced for a short time. I was really happy that Shake Shack agreed to work with my friend – and one of my favorite artists in the world, Cody Hudson, on the branding and packaging, as well as Mark Rosati suggesting to do something with Flagrant Hot Sauce. And of course, since drinking is an integral part of the Yardbird experience, we obviously had to include a beverage element. Bringing Sunday’s Whisky to the Fifty/Fifty and working with Young Master on the canning was really an amazing experience.

Mark: Matt is the master of all things chicken at Yardbird, so it was awesome to work with his culinary expertise to take a new look at some of the chicken items on our menu! I also love sitting at the Yardbird bar because their cocktails are easy-drinking and dangerous. We made a canned cocktail for the event using our Fifty/Fifty Shack-made lemonade and tea plus their Sunday’s Whisky. Man oh man!

Please tell me more about the Chicken Katsu Sando!

Matt: We are making the Katsu Sando almost identically to how we do it at Yardbird, except it’s going into the Shake Shack bun. We start by grinding the leg meat, mixing it with finely chopped, washed, and squeezed white onions, and seasoning it all with salt and pepper. We then bread the minced chicken patties: first in seasoned flour, then egg, and finally, fresh Japanese panko breadcrumbs. After frying the chicken katsu in 180°C oil until golden brown and cooked through, we dip the patty into a sauce mixture of classic tonkatsu sauce and Flagrant Hot Sauce. The katsu is then placed on the buttered and toasted bun, topped with lightly salted cabbage, mixed with Kewpie mayonnaise, and then cut in half.

Any favourites from the menu?

Matt: It’s a toss-up between the Fifty/Fifty x Sunday’s Whisky Highball and the Flagrant Hot Sauce Chick’n Bites. They go perfectly together so there’s no need to choose just one!

Yardbird shake shack Mark Rosati Matt Abergel
Lorria Sahmet
Editor
After two years writing in luxury retail, Lorria now covers food and drink happenings in Hong Kong. When not taste-testing for the best fries in the city (shoestring, always!), find her at home obsessing over tableware and attempting a fruit garden on her tiny bay window. She is happiest by the ocean with a giant fishbowl-glass of Aperol Spritz.
Food Drinks Culture Living Hong Kong
Sign up for our newsletters to have the latest stories delivered straight to your inbox every week.