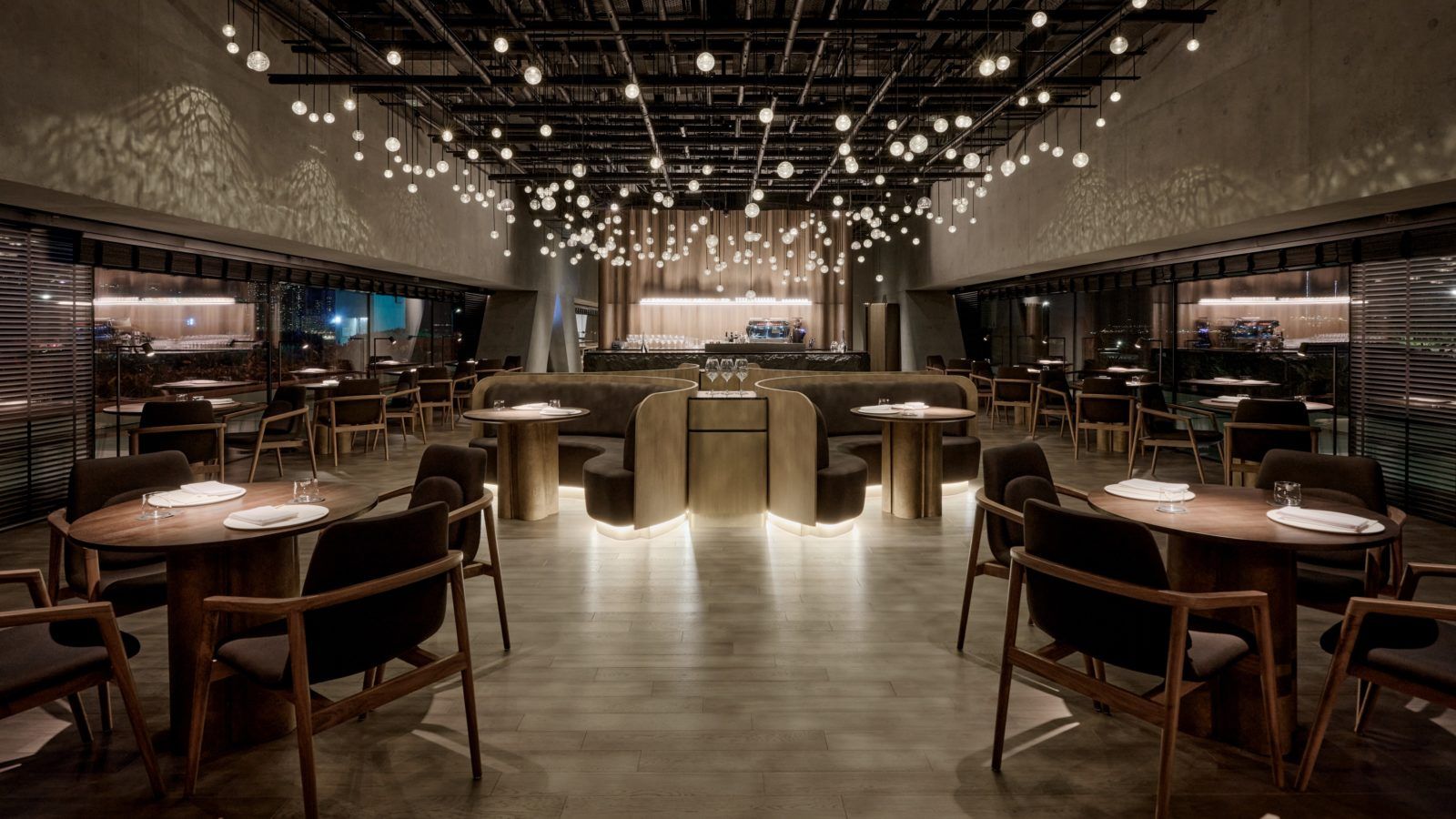 Chef Sung Ahn is not bothered by how your refer to his honest and deeply personal cooking at Mosu. Innovative. Fine-dine. Modern. Creative. He just keeps two rules in mind: respect the ingredients and create damn good flavours.

Sung Ahn humbly admits he knows nothing of the restaurant business.

At least, he didn’t when he first began his now world-renowned — and two Michelin star-recognised — innovative Korean restaurant, Mosu, which opened initially in San Francisco, before expanding to Seoul (where it earned its stars), and, with a joint partnership with hospitality group Lai Sun Dining, Hong Kong.

(Side note: he’s now fully, completely, entirely knowledgable in the ins-and-outs of running a restaurant.)

“It was more just one question, ‘What kind of food do I want to cook?’,” Ahn shares of the starting of Mosu, “From there, I just wanted to do something different, something that is rooted in my culture and also combined my experiences and childhood memories. I wanted to create something that was more personal.”

Not exactly a stranger to the culinary or restaurant world, Ahn is instead terribly familiar. He grew up on his grandmother’s traditional recipes of North Korean-Japanese cooking. His parents ran a Chinese restaurant in California. And after serving with the US army in Iraq, Ahn reached for the stars and worked alongside notable chefs in fine-dining kitchens including Thomas Keller’s three-starred The French Laundry and Corey Lee’s two-starred Benu.

Feeling inspired, Ahn then went in search of a distinct cooking style of his own. He found it very close to home with Korean cuisine, where he tweaks the characteristics of French fine-dining lent from his own training. This quickly materialised into the deliciously stunning plates of — if chef Sung will allow me to say so — innovative Korean dishes served at his very own restaurant, Mosu.

“’Innovative’, as a marketer would say,” Ahn says with a laugh. “It depends on what angle you look at it. For Koreans, will they really say it’s innovative Korean, or is it just French, or Japanese?”

“We say it’s ‘innovative’ because we twist around things that’s never been done before, but not going so out of the way where it’s far from traditional in terms of combinations of flavours and techniques. It’s the little ideas and small changes that creates something new for a sense of discovery,” Ahn finishes.

This yearning path to “discover”, to learn and continuously try and explore is an integral part of Ahn’s own character, and in-turn, woven in into the fabric of his restaurant. Ahn maintains a crystal clear purpose with Mosu, which, by the way, is the Korean name for the cosmos flower, a bud that blooms in a flower field near his childhood home. It’s not just another fine-dining Korean experience, but one created with intention, of a meaningful narrative, whether it be from Ahn’s own childhood or the ingredients that he has chosen to feature.

Hong Kong is an unending catalogue of fresh produce, from local finds to rare imports. Ahn shares that his initial vision for Mosu Hong Kong looks a little different to final tasting menu served — the current one is a recreation of Mosu Seoul with minute edits. Because like many chefs that took on the onerous task of opening a restaurant during a pandemic, he was met with supply chain struggles and sourcing consistency, which also meant choosing to go down a “safe” route that was already tried-and-tested.

He does touch on a fair few regional specialities he’s looking forward to trying: Jing Hua Ham, Bird’s Nest and Fish Maw — things that Ahn feels are central to Cantonese cuisine. After all, Mosu is his vehicle to experimenting with new flavours, and a Mosu in Hong Kong should naturally take on flavours of the city. Of course, all while taking in account the nature of the ingredient. For now, while he’s away, he tasks his chefs on the ground with this: to buy everything from the local market and try anything they’re not familiar with.

“That’s the only way to understand [new ingredients],” Ahn says. “If they think it’s usable, they study it, of where it came from or why it tastes this way, and the traditional ways to prepare it.”

“The fun part is always exploring and using new ingredients. But the only way for me to use something is to go back to understanding not only the cuisine, but the culture,” he explains. “How does [a country] perceive an ingredient? I don’t want to just play around with something cause I’m curious. It has to make sense to the cuisine and the culture, and to respectfully represent the ingredient as well.”

Then, five savoury courses follow: Black Sesame, a Xiao Long Bao-shaped seaweed water tofu infused with toasted black sesame with Hokkaido sea urchin filling (an alternative one made with almonds is served in Seoul; a white sesame one is made for April); Tilefish, steamed Samchun-Po tilefish, a method that Ahn believes to the most rudimentary way to prepare and preserve the nature flavours of fish, with three types of mustards; Sea Bream, roasted Korean seabream with Chinese morel mushroom and ssamjang sauce; Acorn, roasted Mount Jiri acorn noodles in a butter and Parmesan sauce with Korean parsley and shaved black truffle; and finally, Hanwoo, charcoal-grilled Korean A++ grade beef cooked in Shaoxing wine and gochujang, served with deodeok (Korean ginseng) and naengi (shepherd’s purse shoots).

Korean-inspired sweets sound the finale of the menu, with the Chinese Almond, a sweet nutty puree served with salted cream cold custard and Korean sesame oil; Lemon Rice Cake made with unfiltered Makgeolli rice wine “gimcome” moulded into a lemon peel; Taro Tart, burdock tart with taro-cooked butter as a nod to the Chiu Chow Taro Dessert (a regional cuisine Ahn has discovered and since loved during his time in Hong Kong); and Dashima, dried kelp ice cream.

When you do make your way for dinner at the stylish 60-seater venue designed by LAAB architects housed within the equally stylish M+, Ahn highlights three dishes (which also happens to some of my own memorable picks — he made sure to ask) to look out for: Black Sesame, Abalone Taco and Ahn’s personal favourite, Steamed Fish.

Ahn shouts out another Hong Kong inspiration — “Three or four Cantonese restaurants I visited, they all served that Chinese almond. So I thought, why not use that?” — So, Chinese Almond dessert, too.

Mosu is now open for dinner from 5:30 to 10pm with a set seasonal tasting menu priced at HK$1,180. Reservations can be made here.

Hong Kong M+ Korean cuisine Mosu Hong Kong Sung Ahn
Lorria Sahmet
Editor
After two years writing in luxury retail, Lorria now covers food and drink happenings in Hong Kong. When not taste-testing for the best fries in the city (shoestring, always!), find her cosied up at home skimming through Netflix or nurturing baby plants in her indoor greenhouse. She is happiest by the ocean with a giant fishbowl-glass of Aperol Spritz.
Food Drinks Culture Living Hong Kong
Sign up for our newsletters to have the latest stories delivered straight to your inbox every week.