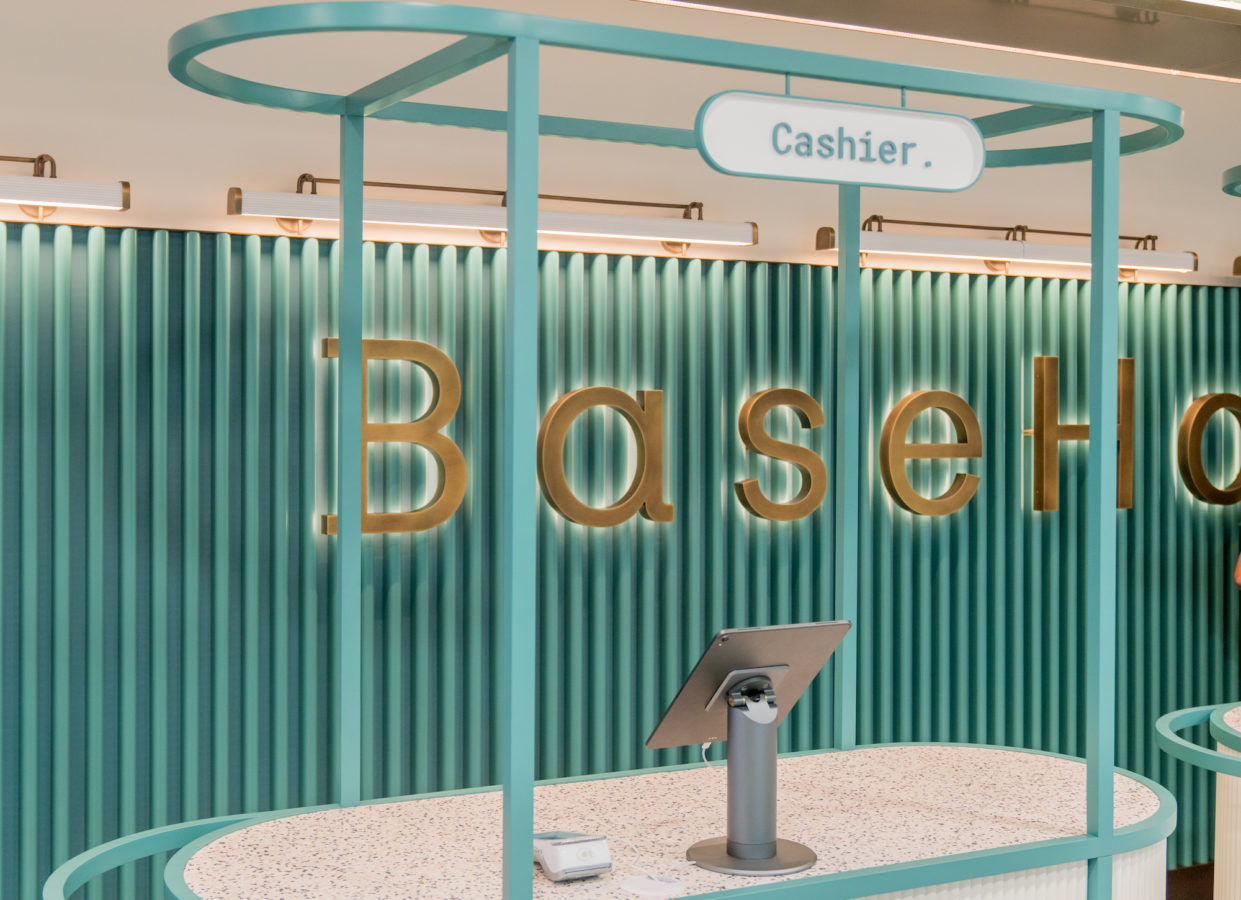 Operating out of a boldly imagined space in the belly of Jardine House (formerly home to Grappa’s Cellar), this newly opened multi-concept food hall assembles a handful of Hong Kong’s most exciting dining concepts — some fresh, some renowned, all calculated to blow the lid off of boring desk lunches. Put down the salad kit Jerry, we’re going to Basehall!

Last year, if you’d told us the most exciting restaurant opening of the summer was going to be — for lack of a better catch-all — a food court, we’d have laughed ourselves all the way up to SoHo. Then again, a lot has befallen the Hong Kong hospitality industry these past six months; and new projects demand thoughtfulness, sufficient scope and a genuine demand in order to succeed. On the face of things, Basehall ticks all these boxes: the expansive F&B concept has been in the pipeline for over two years now, greenlit by Hongkong Land following the realisation that Central denizens — notably office workers — had access to too few serious culinary destinations (that in turn, didn’t cost an arm and a leg).

“Our aim was to incubate new F&B concepts in Hong Kong by providing a unique platform for creative chefs,” says Tom Andrews, the senior asset manager on the project. “We hope Basehall will become an exciting dining destination for the Central office community … the diverse mix of food and drinks as well as music and content will definitely create a fun space for our younger clientele.”

Within earshot of the concourse connecting Jardine House to the remainder of the Landmark commercial complex, Basehall’s split-level space has been designed with an eye toward sustainability: composting is done on-site (disposable cutlery is provided by Hong Kong-based eco-packaging brand Vegware); filtered water dispensers are plentiful and many aesthetic elements have even been up-cycled from other famed Hongkong Land projects (it seems an odd suggestion, but when using the loo, spare a moment for the brass wall fittings which once adorned the ceiling of Richard Ekkebus’s Amber restaurant).

To help transition the space from day to night, the high ceiling over the airy lower mezzanine has been equipped with a state-of-the-art lighting system that can mimic the natural light conditions outdoors, as well as create atmospheric rainbow hues that respond to music and people dancing below. Appropriately, Basehall has tapped Arthur Bray’s DJ collective Yeti Out to curate the music programme. There’s also space for DJ events and bands to perform live here, with the hopes that Basehall’s late opening hours will attract the post-work crowd long after happy hour ends.

Obviously, these undeniably grandiloquent efforts would be somewhat undermined if the grub was anything less than delicious, but even at these early stages (it’s still in the midst of a two-week long soft open before the official launch date on 15 June), Basehall’s main vendors are slinging a diverse variety of Mexican, Malaysian as well as Hong Kong- and Japanese-inspired flavours.

From juicy rotisserie-style chicken (from the crew behind Yardbird) to Chef Barry Quek’s nostalgia-inducing rendition of Nasi Lemak, these are all the best dishes that you’ll definitely want to try.

You might also like…
Food & Drink
The Daily Tot, a 1,300 sq.ft. sanctuary for rum lovers, will open in Central this July
Food & Drink
Best Bites: The top 6 dishes we ate in May 2020 Yes, rotisserie chicken: Trust the folks at Yardbird to take something that’s usually a no-brainer weeknight staple for most, and elevate it into an exciting family-style meal we’d be happy to eat all the time. Matt Abergel et al have once again waved their magic wands over Hong Kong’s prized ‘triple yellow’ chickens from the New Territories — marinated with the umami trifecta of sake, kombu salt and shio koji (a mix of rice koji, salt and water) — for truly flavourful, tender birds that arrive with perfectly glistening, crisped up skin. Choose from quarter (HK$68), half (HK$118) or whole chickens (HK$228) paired with your choice of sauces — from the bright red Flagrant Harbour hot sauce, Ninja Turtle-green chimichurri, or our favourite of the bunch, a yellow yuzu honey mustard, as well as a silky miso onion gravy for that classic pairing. A range of sides (salads, ‘slaw, pickles and roasted veggies) are perfect add-ons to relatively pocket-friendly combos (HK$98–488). — Evelyn Lok, Deputy Editor 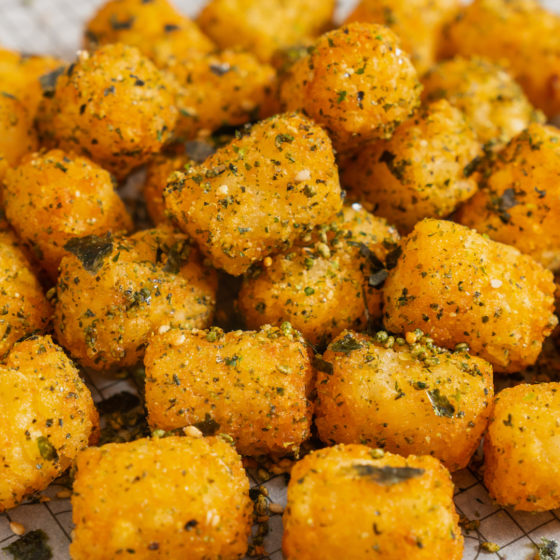 Though rather unassuming on the outset, Rotitori takes the fun schoolyard snack and gives it a Japanese twist with a topping made with powdered nori, sesame and bonito flakes. With small (HK$40) and large (HK$60) sizes available, when eaten fresh out of the fryer, these fried potato bites remind me of a homemade version of the perennial Hong Kong favourite of McDonald’s Shake Shake Fries — but a touch crispier and even more dangerously addictive. With a tall, crisp light beer, highball or Rotitori’s Yuzu Lemonade, I could honestly eat these all day. — EL 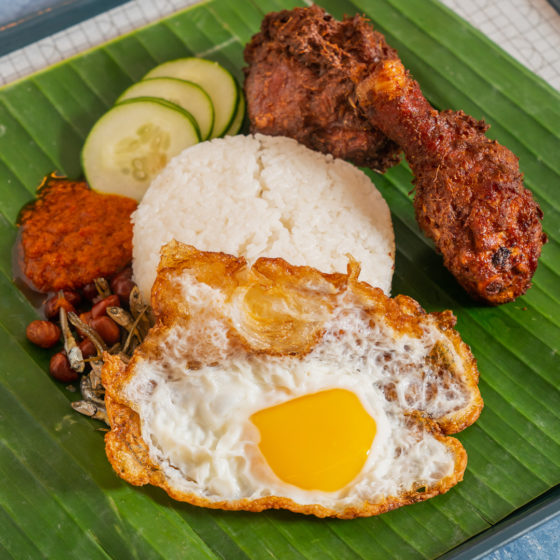 After an all-too-brief hiatus following the closure of his critically acclaimed restaurant Beet, Chef Barry Quek has returned to the captain’s chair with a new Malaysian concept, Return of Lemak. Jointly orchestrated by Co Thanh founder Brian Woo, ROL specialises in the sort of Southeast Asian hawker fare sorely lacking in Central’s current lunchtime situation. And with a moniker that brings a certain 1996 Mark Morrison tune to mind, nostalgia is the name of the game here. Quek’s cendol, Laksa and sotong youtiao are all equally worthy of attention; but it’d be a criminal oversight not to spotlight the eponymous Nasi Lemak (HK$138). Made in the style of ayam goreng — a popular variation in Singapore which includes fried chicken — this comforting rendition includes all of the classic Malaysian trimmings. Rich fluffy coconut rice mingles with a sambal that’s fiery without ever being overpowering; whilst peanuts, anchovies and a fried egg (characterised by perfectly crisped edges) add an element of complexity to the otherwise moreish fried chicken. Truly, the cure to your next sad desk lunch. — Randy Lai, Watches Editor 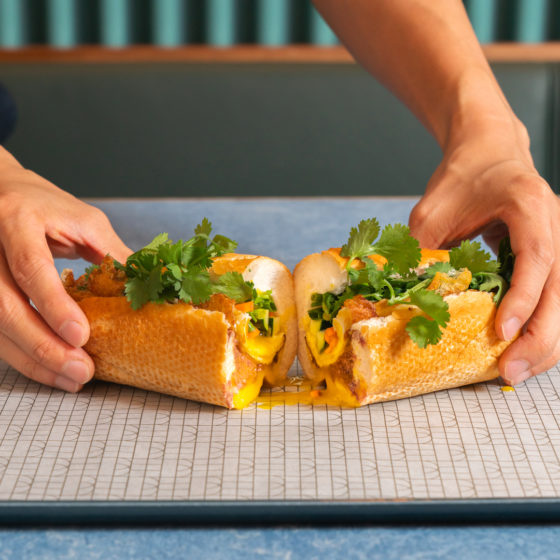 Perhaps I’ve been jaded by certain banh mis in Hong Kong, typically made with baguettes so crunchy that they rake the roof of your mouth with every bite, and often constructed in a way (poorly) that leaves you with strings of carrot dangling around your jaw. However, with Co Thanh’s take on the fried egg banh mi (HK$98), it’s not only free of those annoying sharp edges, it’s gobsmackingly airy and light with the ideal thin crispy exterior. This is thanks to the bread recipe perfected by Co Thanh’s chef-proprietor Brian Woo, baked daily in-house. The filling is equally worthy of praise: with a satisfying smear of pâté brightened by a guise of health offered by cucumber slices, pickles, spring onion and cilantro — and of course, that money shot of oozing, unctuous yolk — each mouthful is a clean bite of every ingredient, ensuring happy, (mostly) mess-free customers with a dish that works for breakfast, lunch or dinner. If you can muster up the courage, ask for extra chilli peppers for a next-level kick. — EL 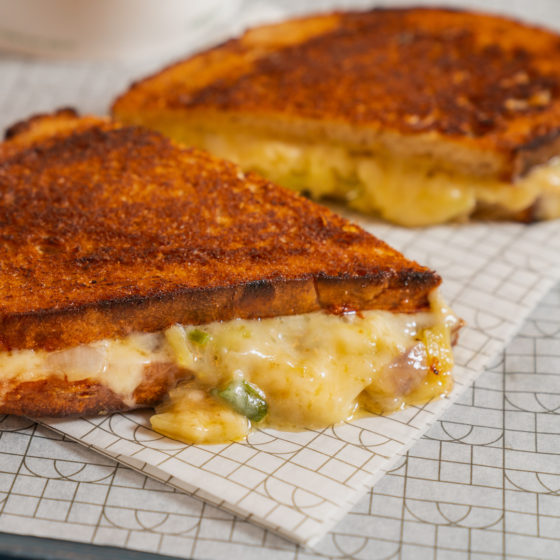 Devotees of the nuclear orange Yankee-style grilled cheese may be advised to look elsewhere, but for everybody else: the next time you’re craving an extremely satisfying, top-line take on the humble toastie, look no further than Basehall Bar. The venue’s ‘Classic’ toasted sandwich (HK$128), reportedly made from a recipe devised by the gents at The Chinnery, discreetly sets about the task of dismantling tired tropes associated with this hallowed bar snack: switching out yellow American for a ‘secret’ cheddar filling; and Wonder Bread for thick chunks of grilled-till-golden sourdough. On top of that — as one might expect of any dish made with creative input from chefs at the Mandarin Oriental — the filling is finished with a medley of caramelised onion, leek and chive. I’d be lying if I said the result wasn’t a satisfying one: a veritable explosion of cheesy crunch that, when bitten into, imparts tiny jewels of sweet, fragrant acidity. — RL

Bar review: Birds of a fashionable feather flock together at Popinjays