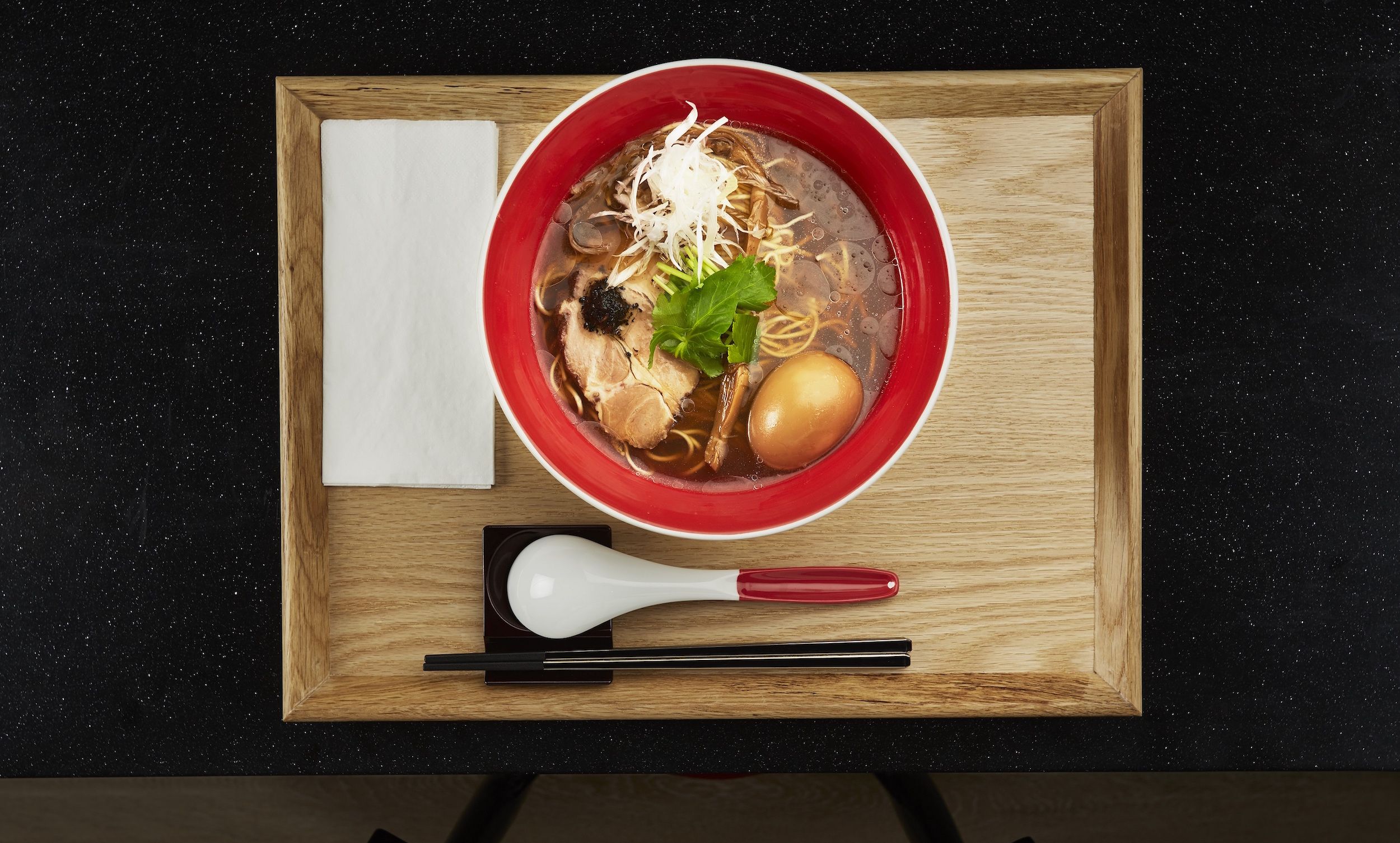 Hong Kong’s food-obsessed crowd have been in a frenzy since it was announced that they’d soon be flocking to a local outpost of Tsuta, the world’s first Michelin-starred ramen joint (not counting Hong Kong’s MIST, which earned Michelin stars in 2011 and 2012 before closing). First opened in Tokyo in 2012 by master ramen chef Onishi Yuki, the shop is best known for its secret-recipe soba noodles and its truffle oil-blended shoyu soba (soy sauce-based broth).

The cause of the hype is no mystery: Tsuta became the world’s first-ever Michelin-starred ramen restaurant in 2015, followed by consecutive stars in 2016 and 2017. In addition to the original location in Tokyo, Tsuta has been franchised to Singapore and Taiwan; naturally, Hong Kong was next on the agenda. With the Michelin distinction have come extensive queues (some report a wait of up to five hours), and we’re pretty certain that Hong Kong’s going to see the same snaking lines.

Luckily, we were able to jump in ahead of the grand opening (Monday 22 May) to have a first taste of the world-famous ramen. The menu is simple: choose from shoyu (soy-based) or shio (salt-based) ramen (both MSG-free), with the regular size starting at HK$98 and increasing in price for extras, including additional slices of char siu, soft-boiled egg, and bamboo. With only two options available (miso ramen will be added to the menu later on), we’d recommend trying both bowls — they’re both distinctive in flavour, and preferences will come down to personal taste.

That being said, the shoyu soba is historically the more popular (and the more traditional) variety, boasting a soy sauce, or shoyu-based broth that’s made with a combination of whole chickens, seafood, and three different types of shoyu (two that are specially brewed using soy beans matured for two years), all of which are simmered together for no less than nine hours. The broth has a much lighter, cleaner taste compared to other varieties such as traditional tonkatsu (pork-based) broth, while still boasting a satisfyingly rich mouthfeel that makes slurping ramen broth so enjoyable.

What really sets Tsuta’s Shoyu ramen apart is the dab of truffle sauce that’s spooned into the bowl at the last second. As the truffle oil leaks into the broth, you get a massive hit of umami, enhancing the overall flavour of the broth. Purists might balk at this unlikely addition, but we found it worked well with the different components in the bowl.

Of course, a bowl of ramen is only as good as each of its individual components, and here is where the dish shines. First, there’s a beautiful, slow-boiled onsen egg, with a gooey, yellow centre; bamboo, adding a subtle sweetness; shredded leeks and cilantro to provide herbal contrast; and a thin slice of succulent char siu, which thankfully doesn’t lose any of its savoury, roasted flavour despite a dunk in the hot broth. If you decide to (and you should), you can add on extra slices of char siu for HK$12 per slice.

Last but not least, there’s the noodles, which deserve their own special mention. Blended with four different types of flour, the soba is absolutely fantastic — less smooth and slippery, and more springy and firm than regular ramen noodles. There’s a more pronounced texture, and you can almost taste the individual grains of wheat in each strand. We adored these, but using soba definitely veers towards the untraditional side of ramen, so your appreciation for it may vary.

Even more unconventional is the shio ramen, a lighter broth made from a mix of Okinawan and Mongolian rock salt. It features the same bamboo, egg and char siu as the shoyu, but with the addition of red onions, mint, and a spoonful of green olive puree on top. It was a bit disarming to taste green olive while slurping ramen, as well as a strong hit of mint, but once you’re a few slurps in, you realise that the ingredients somehow work together — almost like an Italian-style ramen, if such a thing existed. While we’d come back for a second bowl, the shoyu was, for us, the clear winner between the two.

Like the Tokyo flagship, Tsuta in Hong Kong will feature a vending machine system where you order your bowl plus any extras before taking a place at the 20-seat bar. Only 400 bowls are available a day, so make sure you get there early, or be prepared to queue. Is this Michelin-starred bowl worthy of its HK$100 price tag? Absolutely. Is it worth a five-hour queue? Perhaps we’ll let you decide on that one.

Hong Kong New Restaurants Causeway Bay Dining Japanese Food Restaurants Ramen Michelin Where to eat new openings tsuta where to eat in causeway bay ramen bar best ramen
Leslie Yeh
Editor in Chief
Having worked as a lifestyle editor for almost 10 years, Leslie is thrilled to be writing about the topic she loves most: wining and dining. When she's not out pounding the pavement for the latest new restaurant opening or tracking food trends, Leslie can be found at home whipping up a plate of rigatoni vodka and binge-watching Netflix with a glass of Sauvignon Blanc in hand.
Dining Restaurants Food Trends Drinks Travel
Sign up for our newsletters to have the latest stories delivered straight to your inbox every week.