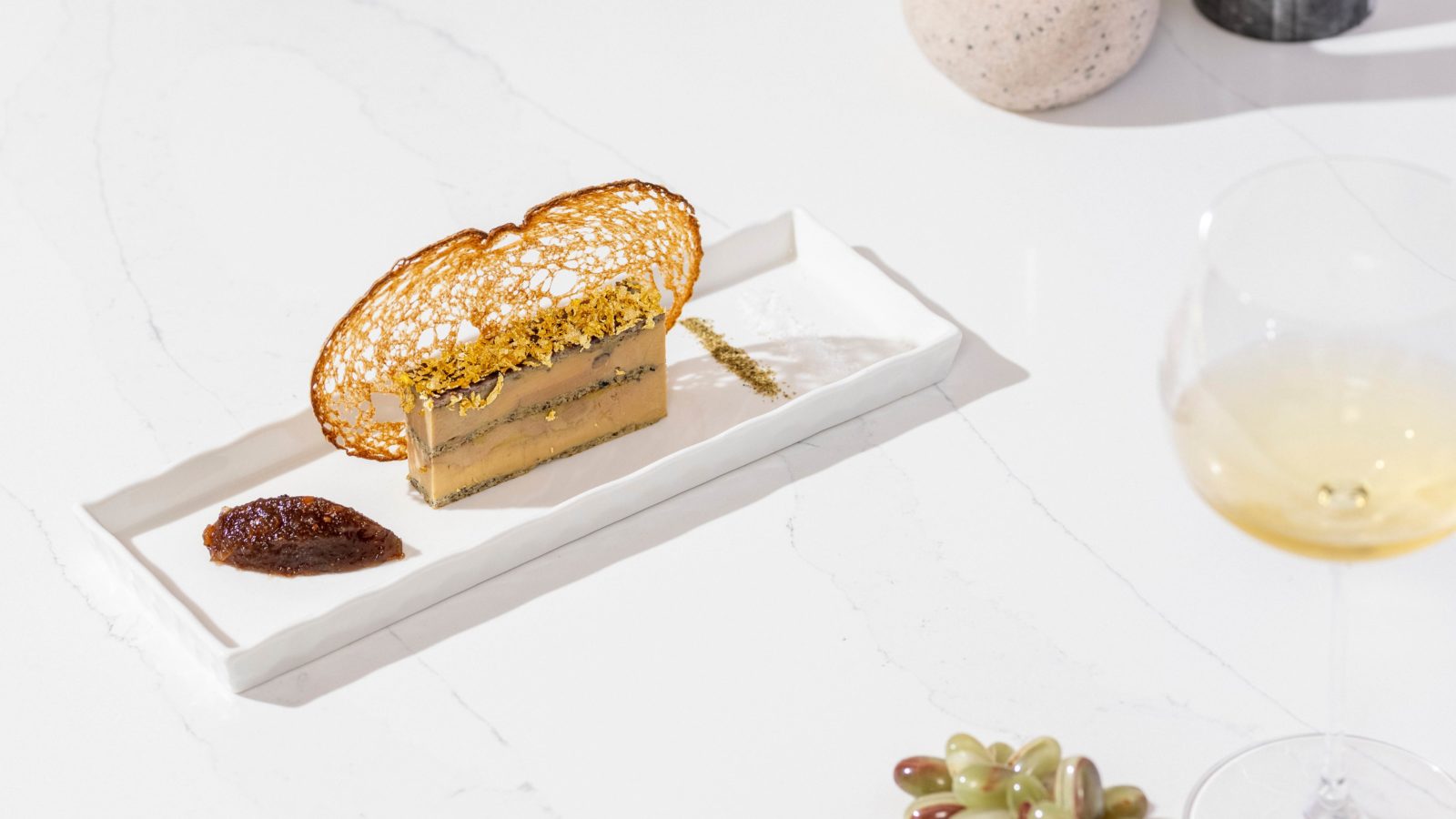 Where to eat in Hong Kong this November 2021

Tell me Hong Kong, as a uniform collective, is sorely missing Japan without telling me Hong Kong is sorely missing Japan. This November’s list of new restaurants features a healthy handful of new Japanese openings –– omakases, yakitoris, ramen spots. Love letters, basically. While we close our eyes and play pretend, there’s a handful of other things worth exploring this month. New bars! Or a visit to your favourite spot for a #TheMMMs snap. See, it’s not all bad.

All the new restaurants opening in Hong Kong this month:

You might have caught our First Look preview of The Sixteenth back in October. For those who missed it, The Sixteenth is Pirata Group’s latest, three-years-in-the-making venture that combines four separate eateries –– Tempo Tempo, La Favourita, Honjokko and TMK Funk & Rolls –– into one 18,000 square-foot venue. A quick flip through each concept: Tempo Tempo, an outdoor terrace for aperitivos, cocktails and canapés; La Favourita, rustic Italian plates; Honjokko, like its Sheung Wan sibling, serves contemporary Japanese plates with a new sushi selection; and TMK Funk & Rolls, the latest music-driven edition of the TMK pack playing soulful chart-topperes from the likes of James Brown and Marvin Gaye.

As the more ambitious extension of Sushi Sooshi, Sooshi Gold is not just another Japanese omakase experience but instead renews the traditional practice with the addition of familiar western cuisine ingredients. The 15- or 18-course menu, beginning at a very affordable HK$798, features interesting takes including deep-fried rice cakes with eels, fusion pastas and wagyu, sea urchin and caviar roll amongst the typical nigiri that are bound to bring surprises to unexpecting guests.

We will always miss Okra, but that new noodle spot that’s just opened up in its place? It’s DAM:A, a new “chef-driven noodle bar”, that also translates to “to put in a bowl” in Korean. Needless to say, DAM:A takes inspiration from traditional Korean noodle bars with head chef Waheeb Abrahams and Kevin “Ching” Lam, previously at Ho Lee Fook and Carbone respectively, playful experiments of various ingredients. Noodles aside, DAM:A will also serve light snacks and daily specials like Sullung, a South African A5 wagyu in traditional Korean beef broth; Spicy Chicken Noodles; Dubu Kimchi, a twist on the classic Chinese tofu with kimchi coleslaw; and Lamb Kalbi, house-smoked lamb with picked beets and a rich crab ssamjang.

Arron Rhodes and Chris Grare, the chef-and-restaurateur duo behind Smoke & Barrel (the one without the ‘S’) unveils their latest project: Brooklyn Yakuza. On the menu is a deletable serves of sharing Japanese-American plates devised by Irish-born Chinese head chef Lorcan Tan, protegé of Irish celebrity chef Kevin Thornton, inspired by the menus of late-night hideaway izakayas. Fried 911 is a selection of deep-fried snacks including okonomiyaki tater tots, BFC (Brooklyn Fried Chicken) drenched in black sugar and the Home Run Corn Dog that recreates the all-American staple with sushi rice. Other playful sections on the menu: Grilled 911, Cold Blood of raw starters like beef tartare and hamachi crudo, and ending with Booty Call for sweet dessert. A convivial place for group gatherings both large and intimate, alike.

A new tapas spot has opened its door over on Gough Street. Chueca, named after a district in the busy city centre of Madrid, is ideated by chef Jordi Vallés, previously of Aqua Group and Pirata. In the new modern, airy interiors painted in sky blue and cream, it’s a contemporary menu of Spanish nibbles that guides the dining experience. Spot familiars like croquetas de jamón and lobster rice, along with venue specials: Chef’s Rusa, a potato salad with mayonnaise and tuna carefully layered with sherry marinated salmon roe; while Chef’s Canelón is a staple in chef Jordi’s hometown of Barcelona –– truffled meat wrapped between pasta with a bechamel porcini mushroom sauce centre. If Spain is currently at the top of your holiday wish-list, Cheuca will be a sound alternate for the time being.

Restaurants in Hong Kong have trailed far beyond a singular venue of just food, they want to be more. Like Kacho Fugetsu, a split-level concept that is a speakeasy on the lower level and then an “urban izakaya” above. Replicating must of the social-centric concept of the Japanese buzzy hideaways, Kacho Fugetsu fixates on a minimal, “wabi-sabi” interior contrasted against an innovative contemporary menu. A medley of flavours, there are Matsuba crab rolls, seaweed wrapped fatty tuna and a foie gras and eel Japanese pot rice. The restaurant also introduces an “Osusume” counter, featuring jet-fresh seafood in the style and selection all determined by chef.

If recent discovery of one KOKORO Tokyo Mazesoba opening in Wan Chai has you gleefully sprinting over only to be met with the line before the line, count this as fair warning –– we made this mistake. But for those lucky ones who managed to time it just right and snag a seating, this cosy spot serves one of the only mazesoba bowls in town. Mazesoba, a Japan-originated dish of dry mixed noodles, relies on its accompanying condiments for flavour –– a runny yolk, heaps of spring onion, sometimes with minced or braised pork. Among the selection of nine, go for the Hong Kong-exclusive yuzu-salted flavour, served with Japanese chicken marinated in fresh yuzu juice and the creamy mentaiko. Don’t forget to slurp!

A multi-concept space that combines a varied selection of lifestyle concepts from entertainment and wellness to food, H Code’s new rooftop venue Carbon is anything you want it to be. The roomy 6,200 square-foot space with an additional 2,600 square feet on the roof brings a one-stop destination for “cultural gatherings”. Food-wise, it will serve a flexi menu that abides to a conscious farm-to-table ethos, with executive chef Mike Boyle bringing veggie-staples and comfort favourites including black truffle pappardelle, zaatar roasted carrots and his green garden platter.

No, you haven’t stepped foot in an old fishing village in Japan, but the venue, Gassan, might make you think you did. It’s designed to wholly embrace the sociable, wine-and-dine, spirit of traditional kaiseki culture –– one out of the four concepts here. Gassan is named after Mount Gassan, the highest of the sacred mountainous trio, Dewa Sanzan. As such, the venue commits to authentic Japanese customs, in atmosphere and menus: a Kaseiki Ryori banquet-style, multi-course dinner prepared by executive chef Wong Kwun-Wa and 50-year veteran head chef Hoso Hidekatsu with tsujuri sashimi, yakimono grill and shokuji rice made with season-fresh catch, two omakase experience in elevated in a contemporary style and an impressive sake and whisky selection spanning 50 different labels.

Within all Japanese cuisine in Hong Kong, it is the omakase that one can never tire of –– it’s fresh new sushi chosen by chef everyday! Now to add to the ever-growing list of these intimate one-digit seating venues is Sushi Hisayoshi –– fortunately a touch roomier with 30 seats –– led by sushi master Hisayoshi Iwa. Along with his apprentice chef Tsukasa Kaneko, they will put together an impressive 23-course Edomae-style dining experience starring their signatures like abalone, ankimo (Monkfish liver), aged fermented tuna sushi and tamago cubes, with the seafood all sourced from trusted sources from Japan. A very traditional take that encapsulates prime Japanese hospitality. Queues will be expected. But this city doesn’t mind.

Do we all remember when the oddly satisfying omurice videos took over Facebook? A gentle glide of the sharpest tip of the knife over a fluffy just-cooked omelette which spills over a bed a rice. Fast forward to this November, there’s a chance to reenact that fond food memory with the arrival of Grill Manten-Boshi, a 43-year-old Tokyo favourite, in Tsim Sha Tsui’s Harbour City. Established by Yoshinao Kubota who trained under the Emperor Shōwa’s chef, Tokuzou Akiyama, Manten-Boshi focuses on a special wayō-style cuisine of westernised Japanese cooking –– evident by the adding of omelette with a special brown sauce and rice. Here, there’s an array of toppings to pick from including prawns and hamburg patties along with classic Japanese snacks –– croquettes and tempuras.

To those wishing, hoping and praying for trip to Japan, consider the arrival of Sakeh a timely stepping-stone to satsify your wanderlust just a little bit longer. The latest yakitori bar, designed after the Aburaya bathhouse in Spirited Away, joins the Japanese agenda in Hong Kong. There’s a delightful variation of skewer stalwarts here: the Kagoshima A5 wagyu, lychee wrapped pork and all parts of lightly salted grilled chicken from the neck to thigh. The signature, though, is one Sakeh endearingly calls “Bird Lantern”, named after its very photogenic visual of running yolk hung precariously upon the tip of a grilled chicken skewer.

Dark Leaf Cafe & Lounge may sound more like afternoon coffee hangout rather than restaurant, but it doesn’t mean the menu is lacking. Not at all! While it has an extensive beverage program of tea-infused cocktails and over 80 custom shisha blends, the food an exciting refresh from typical bar snacks. A mentaiko frenzy, to be exact. The signature of this venue, Lobster Mentaiko Spaghetti, served with Fukuoka mentaiko cream and American lobster. Also another to sample, tiger prawns and scallop mentaiko spaghetti.