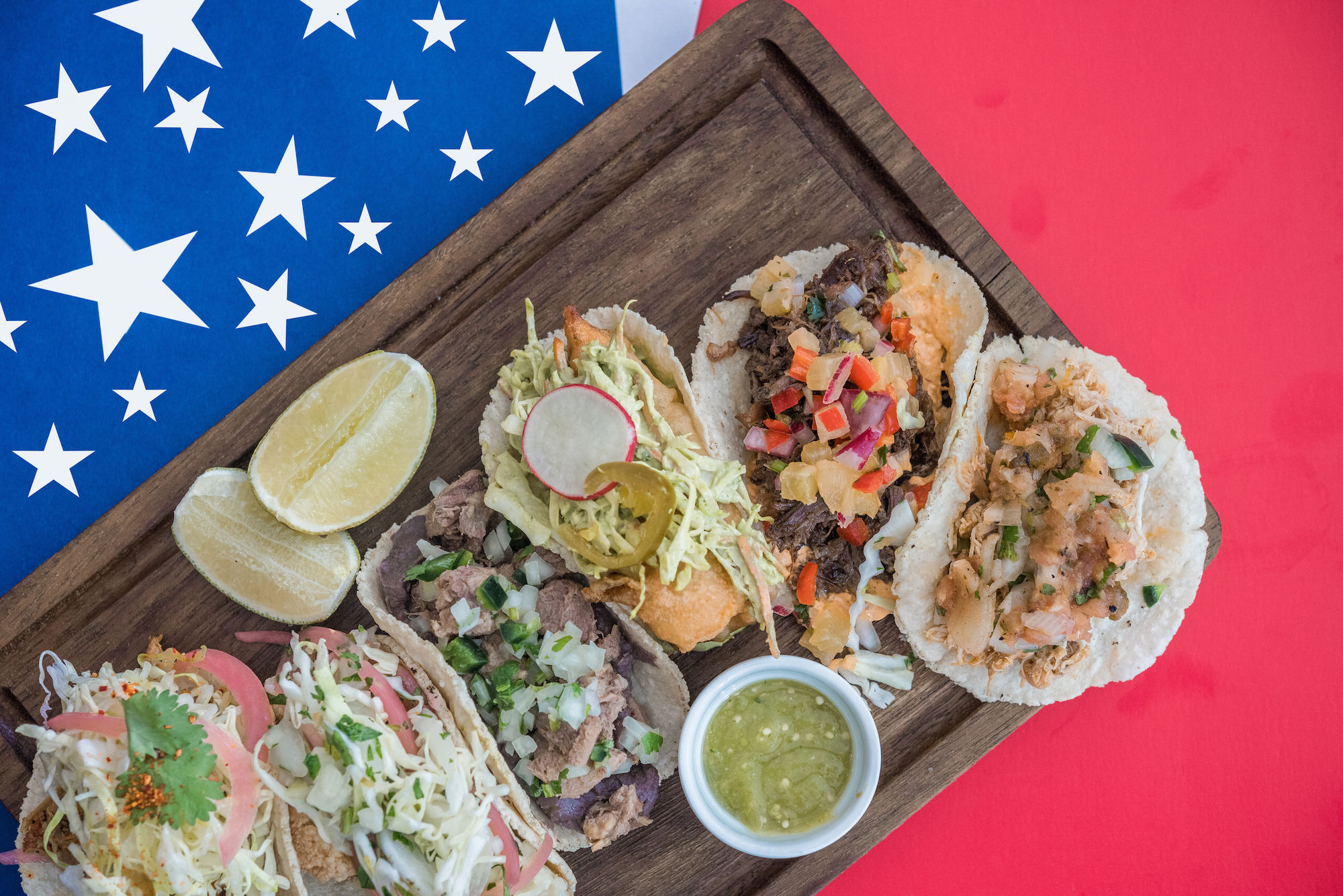 Sure, it’s great fun being an expat in Hong Kong, but one of the downsides is missing out on holidays back home. To our American friends longing for backyard cookouts and fireworks fun this Fourth of July, you’re in luck — Hong Kong has its own mix of red, white, and blue celebrations around town filled with mouthwatering BBQ, killer drinks, and old-fashioned summer fun. And if you’re not American? It’s still a good excuse to relax and enjoy the festivities with a cold beer in hand. Here’s where to head for the best Fourth of July parties around town. When: 4 July for Taco Tuesday party, 6pm to late; 3–9 July for deal on ribs and beer

Cure your homesickness at Commissary this Independence Day with a patriotic celebration tied to the restaurant’s regular Taco Tuesdays. Decked out in red, white, and blue and America memorabilia — we hear the team is going all out on Taobao purchases — the ‘July 4th Edition’ features HK$50 tacos, including fish, carnitas, pollo, oxtail, beef tongue, and veggie. The more ordered, the cheaper it gets: HK$140 for three, HK$160 for four, HK$200 for five, and HK$300 for eight.

Prefer a more typical July 4th feast? Dig into the finger-lickin’-good St. Louis ribs instead, priced at HK$250 for a half rack and two beers, or HK$450 for a full rack with four beers. Available from 3–9 July, the ribs and beer deal is paired with sides of coleslaw, grilled corn, and soft rolls. And to wash it all down, the southern California eatery is serving up HK$30 Pisco sours, HK$60 margaritas, and HK$300 for a bucket of six Brooklyn Lagers. We can always count on chef Vinny Lauria to give American holidays their proper due. A New York native, he’s paying homage to “The Star-Spangled Banner” this holiday with a Fourth of July–themed backyard BBQ at Stone Nullah Tavern. Stop by on Saturday for an epic BBQ feast paired with free-flow drinks (HK$299, plus HK$199 for free-flow), paired to a soundtrack of American rock and hip-hop. A range of games and competitions, from apple-bobbing to balloon-popping and water-gun fights, will be sure to cure (or conjure up) nostalgia for days spent back home. It’s time to “Make America Great Again, Again!” at Lily & Bloom’s Fourth of July bash, set to be one of the biggest celebrations in town (HK$495 for adults, HK$155 for kids 4–11). Running for two sessions from 11am–1pm and 1:30–4pm, guests can enjoy a host of all-American pastimes: beer pong, wing- and pie-eating competitions, giant Jenga, balloon-popping, and dedicated kids’ activities. Dress up if you want to be the centre of attention, because the winner of the Donald Trump costume contest — boasting the best blonde toupee and orange tan — will receive a bottle of Veuve Clicquot and a HK$1,000 dining voucher.

On the food and drinks side, executive chef Chris Grare and Seattle-trained mixologist John Nugent will present a double whammy of American-style favourites. Feast on smashed potato salad with bacon and cheddar, “dirty water dogs” and a seafood boil, washed down with specialty cocktails including the New York Sour made with bourbon, lemon and Malbec; and the Alabama Slammer with cherry-infused bourbon, orgeat, bitter orange, and sloe gin. Free hot dogs, fries, and burgers are enough to lift our homesick spirits, especially when paired with exceptionally well made cocktails from the talented team at Back Bar. Starting from 6pm on July 4th, head to this insider’s spot behind Ham & Sherry to ingest copious amounts of alcohol with a menu of HK$80 whisky sours, Old Fashioneds, Mint Juleps, Manhattans and Boulevardiers — or go straight for the kicker with HK$50 whisky shots. To line your stomach, the kitchen team will be dishing out a lineup of classic sliders, hot dogs, and fries to fuel the merrymaking. When: Now through 4 July

There’s no problem a good pie can’t solve — at least not one that comes from Burger Circus, SoHo’s purveyors of classic pies, burgers, and milkshakes. A meal at this pink-and-white themed joint always feels like a romp through the good ol’ U. S. of A., and Independence Day is the perfect occasion to scoot on by and dig into one of their rustic homemade pies.

Flaky, buttery, and baked to a fine golden-brown finish, the classic American apple pie is offered by the slice (specially priced at HK$58 through 4 July) or whole for takeaway, in case you’re looking to impress at any Fourth of July celebration. The shortcrust gives way to a warm filling made with organic apples, lemon zest and cinnamon — does it get any better than that? 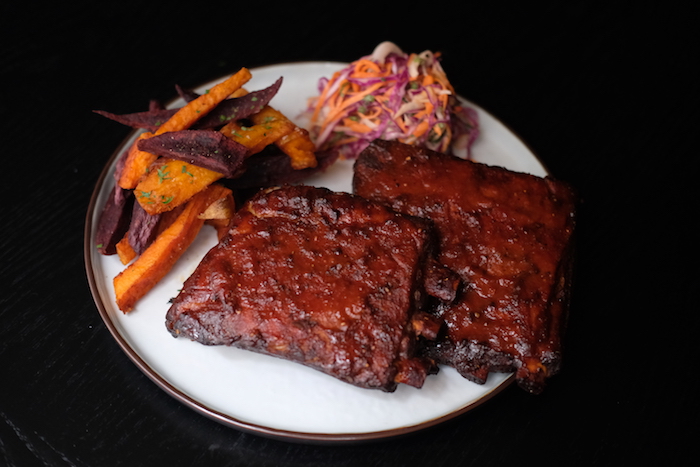 When: every Tuesday night in July

If you haven’t been to this new-ish restaurant on Elgin Street, now’s a good time to stop by, as chef Conor Beach is presenting an American–inspired menu this month in honour of Independence Day. Over the next four Tuesdays, nibble on a range of Stateside snacks including sandwiches filled with Nashville pulled pork and almond wood-smoked Japanee Sagabuta pork shoulder; classic California-style cheeseburgers; and spice-rubbed and cherry wood-smoked Santa Maria tri-tip steak. In collaboration with Michter’s American Whiskey, the drinks menu is also getting a red, white, and blue upgrade, with special cocktails ranging from a refreshing Mint Julep to the Michter’s New York Sour and a mellow Old Fashioned made with Michter’s. To spur the festivities, all drinks will be priced at just HK$80 on Tuesdays, so you can keep celebrating America all month long.

Hong Kong Ham & Sherry Lily & Bloom Beer American barbecue Holidays Burger Circus Back Bar United States Where to eat Fourth of July Independence Day Commissary 12000 Francs where to drink BBQ apple pie
Leslie Yeh
Editor in Chief
Having worked as a lifestyle editor for almost 10 years, Leslie is thrilled to be writing about the topic she loves most: wining and dining. When she's not out pounding the pavement for the latest new restaurant opening or tracking food trends, Leslie can be found at home whipping up a plate of rigatoni vodka and binge-watching Netflix with a glass of Sauvignon Blanc in hand.
Dining Restaurants Food Trends Drinks Travel
Sign up for our newsletters to have the latest stories delivered straight to your inbox every week.