Home > Food & Drink > Drinks > 7 delicious under-the-radar Cognacs that will set you back less than HK$1,000 apiece Food & Drink
7 delicious under-the-radar Cognacs that will set you back less than HK$1,000 apiece
Share this article
Next article

Over the last 30 years, the French distillate has fluctuated in popularity. Today, it’s no longer the sole preserve of tweed-sporting intellectuals and that one uncle who’s slightly sketchy at parties. Cognac — neat, in cocktails, or on the rocks — is making a glorious, long overdue comeback. About time, we say.

Few spirits occupy as dichotomous a position — strangely ubiquitous yet seemingly unreachable — in pop culture as Cognac. The chestnut coloured elixir is frequently associated with kings of yore (think Napoleon I) and the modern upper echelons of society. This barrier to entry is at least partially owed to the price tag for a highly regarded bottle — sometimes costing around the HK$50,000 mark for a blend of centuries-old eaux de vie, and fetching even more ludicrous sums at auction.

You might be inclined to wonder why Cognac is typically so expensive. For the uninitiated, Cognac itself is a brandy produced from twice-distilled white wine, aged in French oak barrels for at least two years. By law, it must be produced within the delimits of the Cognac region, and predominantly use the Ugni Blanc grape. As of 2018, there are now four classifications of the spirit: ‘VS,’ or Very Special, aged at a minimum of two years; ‘VSOP,’ eau de vies aged for at least four years; The more recently added classification of ‘Napoléon,’ for Cognac matured for six years; and ‘XO,’ Cognac that’s been aged for at least 10 years.

These days, a curious demographic overlap of discerning drinkers and hip-hop enthusiasts has ensured marques such as Hennessy, Martell, Remy Martin and Courvoisier (the four biggest players in Cognac) have remained a fixture in popular culture.

Add to that an increasing number of recent contemporary musical mentions (for better or worse, Drake’s Afrobeat-inflected bopper One Dance comes to mind) and we’re now reaching a resurgence likely to rival the libation’s popularity in 1996: the same year Nas rapped about chasing the proverbial stuff with “a case of Demi-Sec” on his iconic sophomore album It Was Written.

If all this talk of mandatory ageing, terroir and mafioso rap seems a little intimidating, rest assured knowing that you can experience the quality approximate to what you’ll find in the flashier commercial Cognacs at a fraction of the price.

Spend the time to dig a little deeper and you’ll be rewarded with surprisingly versatile, silky smooth exemplars which are a damn sight easier to procure, never mind justify.

In Hong Kong, mixologist John Nugent (of The Diplomat) has been fiercely advocating for the latter — often adding less mature Cognac to signature cocktails with spectacular results. “If you can tear yourself away from the stuff coming purely out of Grande Champagne,” says Nugent, “the more affordable Cognacs have a fresher and more rugged profile, while still maintaining that signature toffee apple sweetness”.

According to Nugent, bartenders have long enjoyed working with Cognac due to the spirit’s balance of fruit and wood-aged characteristics. “Taking those elements and adding acid or vermouth makes for such great, complex cocktails — what’s not to like?”

Below, we run through seven delicious options — bound to inflict no more than a flesh wound upon the proverbial wallet — that are good for building an Old Fashioned, sipping neat and many other applications besides. Initially released to the public in 2011, the 1840 ‘Original Formula’ is a collaboration between Pierre Ferrand’s cellar master Alexandre Gabriel and the mixological historian Dave Wondrich. Modelled after a Cognac produced by Pinet-Castillon in (surprise surprise) 1840, this bottle has been designed expressly for use in cocktails. Classified as a VS and bottled at a comparatively high ABV of 45 percent, Wondrich recommends this as the foundation of your Vieux Carré or French 75 — owing to the spirit’s gently spiced floral profile. If releases from the ‘Big Four’ cognac houses (i.e. Martell, Remy Martin, Hennessy, and Courvoisier) strike you as having, shall we say, an overabundance of character, then this version from Merlet — a blend of several eaux de vies aged from four to 12 years — will likely prove refreshing. Made in a more ‘modern style’ by the family’s patriarch and cellar master Gilles Merlet, the ‘Brothers Blend’ displays a light amber appearance, pushing the oaken characteristics associated with cognac into the background in pursuit of mellow dried fruit flavours. As the youngest eaux de vie in the blending is aged four years, this bottling is classified VSOP.

HK$340 (approx.) from The Whisky Exchange Any discussion about the history of Cognac necessitates a hat tip to Martell. Established in 1715 on the banks of the Charente River, it is (in spite of its age) an innovative and modern Cognac house: producing expressions like this Noblige in order to broaden the international appeal of grape-based eaux de vies. Cast in a curvaceous, long-necked bottle. Noblige is an affirmation of the House of Martell’s reputation for complex, versatile, surprisingly value-per-dollar expressions. Individual eaux de vie used in the blend average at least six years of maturation, helping to give this Cognac enough depth as both a sipper and cocktail ingredient. 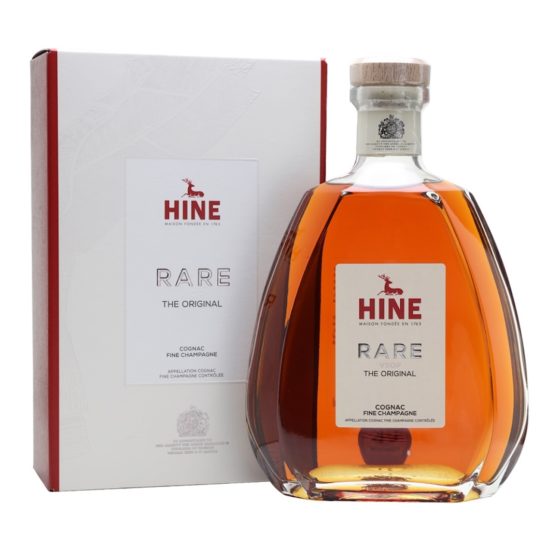 Hovering just above the HK$650 mark, it can’t be said that Hine Rare is a particularly inexpensive VSOP: especially when you consider that this price-point puts it in an equivalent category as Courvoisier and Remy Martin. Still, like every other Cognac which made our list, what it does offer (by the demijohn) is value. Notwithstanding slight variations, each bottle of Hine Rare is composed of between 20 to 25 distinctive eaux de vie, distilled from fruit that is sourced from Grande Champagne and Petite Champagne, considered by enthusiasts to be two of the finest grape-growing regions in Cognac. With an almost rum-like length and palate that’s jam-packed with candied fruit flavours, this is a decadent winter warmer of a spirit bound to appeal to those whose palettes are already primed for whisky and a post-dinner puff. Formulated as a tribute to Frapin’s long history of cognac distillation — the family settled what is now a 240-hectare estate in Grande Champagne in 1270 — this bottling is an apt choice for drinkers looking for a light, terroir-focused vision of Cognac. All of the fruit is sourced from the Frapin family estate, before being aged in casks that have been constructed using oak sourced from the Limousin forest. Despite its aromatic richness, cellar master Patrice Piveteau encourages drinkers to try this Cognac in long drinks: next time you make a Highball, shelve the Scotch in lieu of this.

HK$331 (approx.) from The Whisky Exchange In Hong Kong, ‘XO’ is a tipple that is (at the best of times) a victim of its own popularity. So-called because it is ‘extra old’ — made with eaux de vies that are at least 10 years old — XO Cognacs are typically sold at a market price just shy of HK$2,000. Suffice to say, we were shocked and delighted to discover that Berry Bros & Rudd sell their own private label blend for half that. Reportedly produced for the London-based wine merchants by Cognac Frapin, the titular ‘Berry’s Own’ is distilled using grapes that come exclusively from Grande Champagne — imbuing this cognac with a bouquet of dried fruit, nuts and baking spices. Continuing in the vein of welcome surprises, this Cognac blend by Baron Otard is made with equal parts Ugni Blanc from Grande and Petite Champagne. Though technically certified VSOP, it’s aged for an average of eight to 10 years in oak casks made from loose-grained timber sourced from the Limousin forest. As a result of the elongated ageing process, this VSOP delivers a drinking experience more in line with what you’d expect from a classical ‘extra old’ brandy. A Cognac which punches high above its supposed weight class.