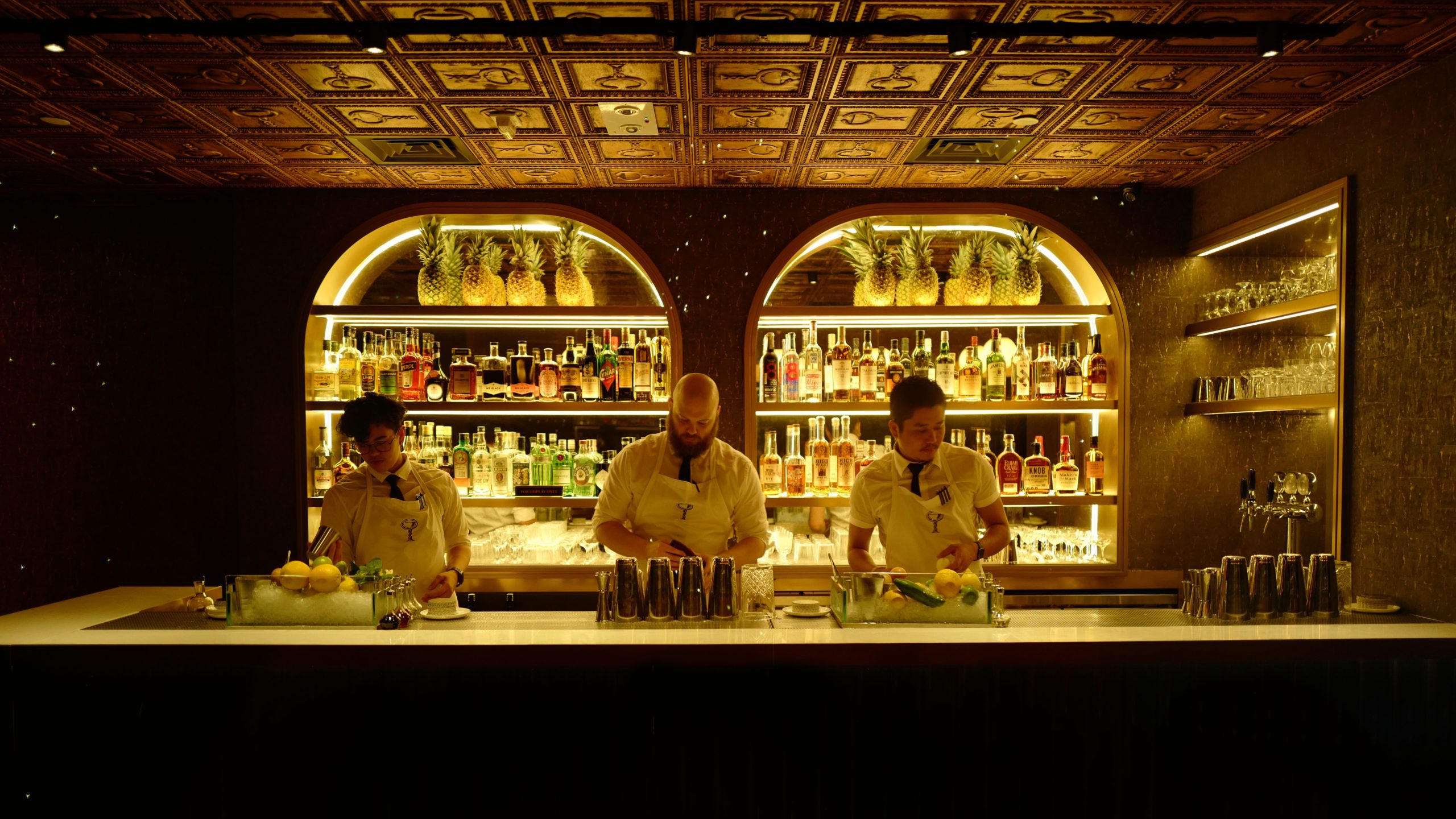 Bar review: The Diplomat pays tribute to classic cocktails with comfort and class

Food & Drink
Bar review: The Diplomat pays tribute to classic cocktails with comfort and class
Share this article
Next article

Opening a bar right now is no joke. With the food and beverage and retail industries still reeling from last year’s months of political unrest and the ongoing Covid-19 outbreak, SoHo’s newest speakeasy concept The Diplomat was poised to open during a nervous time. It began quietly testing the waters at the start of the year, before officially opening in mid-February.

To the delight of industry insiders, it’s quickly become one of the most exciting bar openings of late, and that’s not just because it’s one of the few to brave the scene during a difficult time — we’ve already been back several times since we sat down to check out the whole menu. Perhaps, it comes at a good time that the programme harks back to the roots of the discipline; at The Diplomat, true classic American mixology with subtle, clever twists is the name of the game.

At the helm is John Nugent, who first landed in Hong Kong to lead the drinks programme at the former prohibition-inspired American bar Lily & Bloom. Working low key with the folks behind Elephant Grounds, Wagyumafia and Mashi no Mashi, The Diplomat exudes a familiar sense of effortless cool, whether in its ambience or menu.

Tucked away at lifestyle and dining hub H Code (also accessible by a clandestine set of stairs just off the Central escalators), The Diplomat’s decided ‘speakeasy’ leanings seem an obvious choice, but certain design touches aimed at expressing that very ‘illicit drinking club’ atmosphere are what draw you in: The attractive, mysterious curved facade of tinted glass easily piques the interest of passersby with some kind of Edward Hopper-fueled voyeurism as they are drawn to peer inside. On that note, they’re not kidding around when it comes to the clandestine bar concept; with many secrets to discover, you may want to start prodding and pushing at the walls and decor to see what unfolds in the upcoming months.

Upon entering the bar, we note the handsome leather banquettes and custom motif ceiling tiles, the overall warm orange lights hinting at a more masculine cocktail bar. The use of terrazzo stone, brass and darkened glass bring to mind a stylish revival of mid-century modern California architecture. Little tropical touches, such as a line of pineapples sitting on the top shelf, or the eye catching pink bathroom corridor, mellow it out and add a much-needed injection of quirkiness. A backyard pool feels sorely missing.

If you can’t grab one of the 18 banquette seats, you can also perch by the custom bartop (height adjusted to Nugent’s liking) which is backlit by the handsome mirrored back bar.

The bathrooms here are possibly the most photogenic in the city (and fancy — we spot gilded L’Officine Universelle Buly Paris soap dispensers by the sink), with mirrors typically hogged by sloshed selfie-takers (guilty) and guests ostensibly waiting for a seat on a particularly packed Friday night.

A short and sweet cocktail menu features eight original drinks: The Pearl (HK$95; below) is the bar’s boozy and more sophisticated answer to an espresso tonic, using Mr. Black Coffee Amaro, with just a lingering tropical aftertaste of pineapple and almonds. Its name is influenced by the late American socialite and US Ambassador to Luxembourg, Pearle Reid Mesta, who became somewhat a Jay Gatsby figure as she hosted parties for the political elite. She is also credited as the creator of the Black Russian, hence the obvious ties to the Pearl’s evolved flavour profile.

The Tarling (HK$95) is a popular order, using pandan-infused gin, white port, baking spices, clarified orange juice and coconut water to create a light yet beautifully rounded, tangy, nutty drink that’s refreshing as well as comforting thanks to the warming notes of allspice and clove, which sips with a slightly silky mouthfeel.

It’s a reference to the classic 20th century cocktail by C.A. Tuck (gin, lillet blanc, white creme de cacao), so named after the eponymous train that ran between Chicago and New York City. William Tarling, who first published the recipe, is the namesake for the drink. It’s a lot of references, but all you need to know is that it’s unusual, and gets more delicious as the layers of flavour develop long after each sip.

The English House Punch (HK$75) is somewhat of a crowd pleaser, despite taking days to make and 18 ingredients in total. The classic clarified milk punch recipe features milk and citrus, but at its heart is rum, brandy and an assortment of spices to create a gently sweet and tart cocktail with a creamy finish — not to mention an attractive pale pinkish hue that matches the walls.

Out of the many well executed traditional cocktails they do, one of our favourites is none other than the Whisky Sour (HK$100), garnished with a stenciled “I heart HK” logo atop a sturdy layer of fine egg white foam. The simple cocktail is the result of Irish whiskey, bourbon, citrus and honey, which lends a noticeable softness to the drink.

After a few rounds, you’ll want to lean into the mini martini section of the menu, which are half serves of traditionally potent martinis, perfect for greedy gourmands who prefer to taste test a few more tipples rather than lock themselves into a final drink (lest they go overboard — but that’s what the bar bites are there for to mop it all up, right?). A strong go-to is the Gibson (HK$40) — gin and dry vermouth — served with a juicy, puckery Japanese banana shallot.

On a colder evening, we can envision ourselves huddled by the bar sipping on a warm Irish Coffee (HK$100), a rare find in Hong Kong with its soul-soothing luxuriant whipped cream and boozy spiked black coffee, strong enough to knock any horrific weekday you’ve had into distant memory.

As mentioned, the pub grub is worth paying attention to at The Diplomat — particularly The Diplomat Burger (HK$180). The hefty quarter pounder is served simply with a melty, serotonin-rush-inducing smattering of American cheese and a sesame bun. With pickles and sliced tomatoes on the side, plus barbecue-flavoured potato chips, it’s like a Choose-Your-Own-Adventure solution to your drunchies should you want to build your own elaborate bite. Where other burger joints in town have their own satisfying creations, what they often fail at is the vessel — either too laden with sauce and burger juices that it disintegrates in your hands, or too dry. The Diplomat strikes the perfect balance here.

Another solid, satisfying recommendation to go with a heavy session of cocktail tasting is the Cubano (HK$170) sandwich. If the sandwiches from Jon Favreau’s 2014 film Chef looked good to you, these are probably better: the onscreen ones used boring sliced ham, whereas here, the four sandwiches are almost bursting with juicy, tender pulled suckling pork and crispy skin, cheddar cheese, and mustard and arugula to help cut through the grease.

Other hearty bar grub items include Croque Madame (HK$140), Fried Chicken (HK$100) and Truffled Mac and Cheese (HK$90). Skipping dinner before you head here would be a wise decision.

Tackling ‘classic cocktails with a twist’ can be somewhat of a tired trope for bars these days; but The Diplomat rises above the rest, injecting time-honoured creations with confident experiments, surprises and updates. The difference is in whether or not the drinks are memorable enough, and surely, once you’ve tried a few from the menu, you’ll find yourself craving an English House Punch or a Tarling after a long day. And for those sticklers to tradition, you’ll definitely find a perfectly executed true classic to suit your needs.

For the crowd who increasingly care about the story behind their tipple, or about discerning what goes on their taste buds — or in their stomachs, for that matter — The Diplomat, aptly, delivers on all fronts.