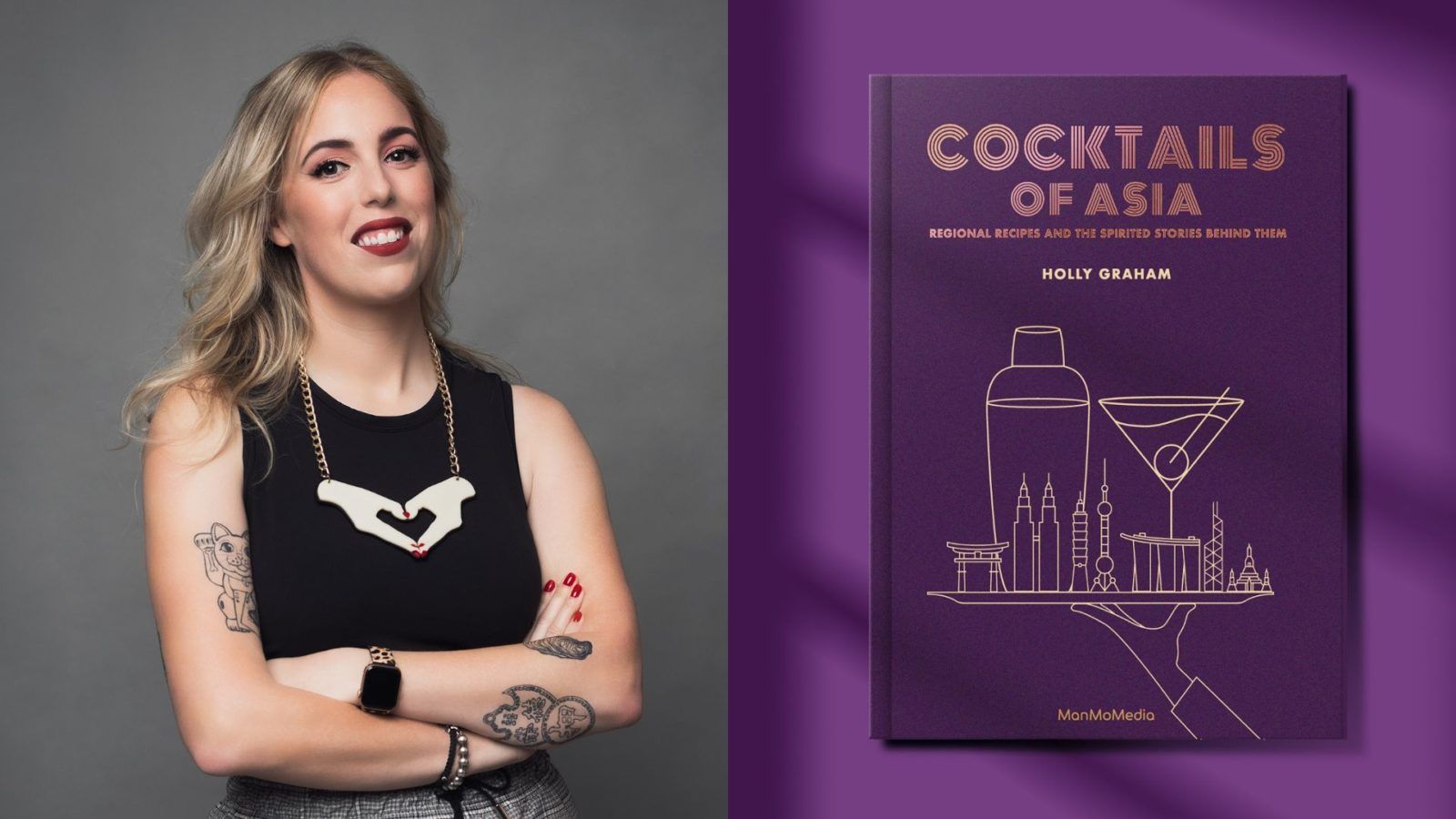 With the launch of her new book, author Holly Graham talks to us about shots, spreadsheets and the cocktails of Asia.

As her Instagram handle aptly indicates, Holly Graham drinks. But she also writes! As managing editor of DRiNK Magazine Asia and Academy Chair of 50 Best Bars, there’s little about all things spirited, distilled, fermented and bottled in our world that she can’t tell you, and given that sterling resume, someone out there — the good folks at Man Mo Media, to be exact — went ahead and enlisted Graham to pen a book, one about the cocktails of Asia.

All she needed was a name.

Cocktails of Asia, available now, is a 256-page, booze-soaked love letter to the bars, the drinks and people who shake and stir them across the region. From COA to Goa, Graham takes readers on a journey through a bar lover’s bucket list of the coolest and most innovative watering holes in Asia, with recipes and stories and the history behind both classic drinks and new concoctions. There’s everything you always wanted to know about baijiu* (*but were afraid to ask) and some personal missives from Graham and her husband-slash-fellow libations expert, Tom Egerton.

Whether you love drinking, travelling, or just having knowledge to drop on your next trip to the bar, there’s something in there for you. And because writing, especially after a long night at the bar(s), can be a difficult and mentally taxing process, we reached out to Holly Graham to give us a few words — from what she learned while writing Cocktails of Asia, to Jay Khan’s Palomas and why you should just say no to shots (even though you probably won’t).

So, Holly, you’re an author now. How’s that feel?

Like I’m a Pokémon that’s evolved. Hollywriter learned “publishing”, Hollywriter evolved to Holauthor. Real talk, it feels really great to have something tangible that captures the spirited achievements of Asia’s drink scene.

What was the research process like before writing the book?

As someone who writes about Asia’s drinking scene for a living, and thoroughly enjoys it, it was like second nature to me. It was hard narrowing down the bars and recipes I wanted to feature, and organising the information I needed — I fucking hate spreadsheets, but had to vibe with them for the sake of the book.

With a lot of the cocktails, I had a good idea of what one I wanted to feature, but some of it left to the bars to decide what they felt truly reflected them and/or Asian cocktails. With the parts of the book that go in-depth about certain beverages, like Batavia Arrack and makgeolli, I bolstered the knowledge I already have with experts in the industry who helped me fact check. I’m really grateful I have so many helpful and knowledgeable friends to draw from.

What was the weirdest moment while writing the book?

There were quite a few I guess, but I guess one would be that I started getting things together for the book and signed the agreement with my publisher Man Mo Media while serving three weeks hotel quarantine. Hotel quarantine is weird enough itself — but a good place to knuckle down if you put your mind to it. It appears I need to be literally locked in a room with no other obligations to get shit done!

What’s your most important advice or tip for a night of cocktail “tasting”?

While most never heed their own advice — I for one like to say I do the following, but absolutely don’t — is drink water, skip shots. It’s not so bad when I’m on my home turf, but often when abroad, being given shots is a symbol of hospitality and camaraderie, but with zero regard for the liver. So when I’m traveling, I want to tick lots of bars and cocktails off the list, but shots are just going to fuck you up much quicker than you’d like. I’d tell you what my secret is to avoiding them, but then I’d have to kill you.

Myself and a certain Editor-in-Chief of a certain lifestyle publication have a certain affinity for a good ol’ tequila soda — fuck your vodka soda, yo — but it’s not a cocktail. It’s a spirit and mixer. Sorry, Nate. A highball if we want to be really fancy.

What is the one thing you wish people would stop doing to or with their cocktails?

I see it a little less these days, but gendering cocktails really grinds my gears. No matter what the colour is or the glassware, garnish and spirits used, drink whatever the fuck you want. Bartenders don’t tend to do it as much, but I do cringe when I ask for recommendations and it comes with a side of “this one is more feminine, blah, blah, blah.” Come correct, cocktails are for everyone.

The worst is when a guest does it to a bartender. A thoughtful, delicious blending of ingredients wasn’t created just for it to be delivered to a table to be called too girly or too manly.

If you could only drink one cocktail in Hong Kong, who would make it, and where?

That’s such a tough question, because what I drink depends on my mood or time of day. However, one that I always come back to and never tire of is Jay Khan’s La Paloma de Oaxaca at COA. After going to Mexico and trying Palomas on their home turf, I realised just how much Jay has spoiled me. They’re so good.

How has the Asian cocktail scene changed in recent years?

It’s come absolute leaps and bounds, and cities like Hong Kong, Singapore and Bangkok — which only had a handful of bars not so long ago — are warranting longer trips just to drink my way around the many great bars on offer. At the risk of sounding like a stuck record, the pandemic has been challenging for every bar industry, but seeing first hand people come out the other side — and the sheer resilience — is something that I think has changed the scene. People were always determined and passionate, but I think seeing how quickly that could all be stripped away has really made people consider their output more. Everyone’s here for a good time, and I hope, a long time.

Are there any new bars in Hong Kong (or Asia) you’re excited about?

Much as I love cocktails, I also enjoy wine and I’m keen to learn more about it, so I’m really excited that my bestie Beckaly Franks is opening a wine spot with her wife Ezra Star called Call Me Al. I just recently went to Singapore and Sago House is changing the game there, part of the city’s new wave of grittier, independent bars. To be honest, I’m always excited for new openings, because I like seeing each bar scene grow, diversify and smash goals!

What’s next for the book, and its author?

I already had the launch in Hong Kong which was a great success — my face hurt from smiling all night. I’ll also be heading to Tales of the Cocktail in New Orleans to host a seminar about the process of writing a cocktail book with some of my other cocktail author buddies, and generally just shouting about the book and getting it into as many hands as possible! I’ll be heading to Argentina for another cocktail festival after New Orleans, so that’ll be the farthest flung corner Cocktails of Asia has traveled to so far!

Anything else we should know?

Support your local bar… and author!

Cocktails of Asia retails for HK$240 (US$29.99) and is available in bookstores across Hong Kong (including Bookazine, Kelly & Walsh, Eslite and more). Outside of Hong Kong, it’s available on Amazon.com and select retail points. It is also sold online on manmomedia.com.

Drinks Bartenders Hong Kong Books Hong Kong Bars cocktails hong kong Hong Kong Bookstores cocktails of asia holly graham
You might also like ...
Living
27 Questions: Beckaly Franks, bartender and co-owner of The Pontiac and The Pontiac Stardust
Food & Drink
Handpicked: Jay Khan tackles hoisin sauce with Mexican flair
Food & Drink
Greening Out with The Pontiac’s Ezra Star over eco-friendly cocktails and plant-based chicken
Food & Drink
Lorenzo Antinori and fellow Four Seasons bartenders across Asia on their top sips and spots
Nathan Erickson
Editor-in-Chief
Made in Seoul and based in Hong Kong, Nathan has covered food, fashion and music from New York to Paris to Oaxaca. He enjoys street photography, buying too many hooded sweatshirts and he'll never turn down a tequila soda. Catch him on weekends hiking trails all over Hong Kong in hopes of finding his idol, Chow Yun-fat.
Sign up for our newsletters to have the latest stories delivered straight to your inbox every week.