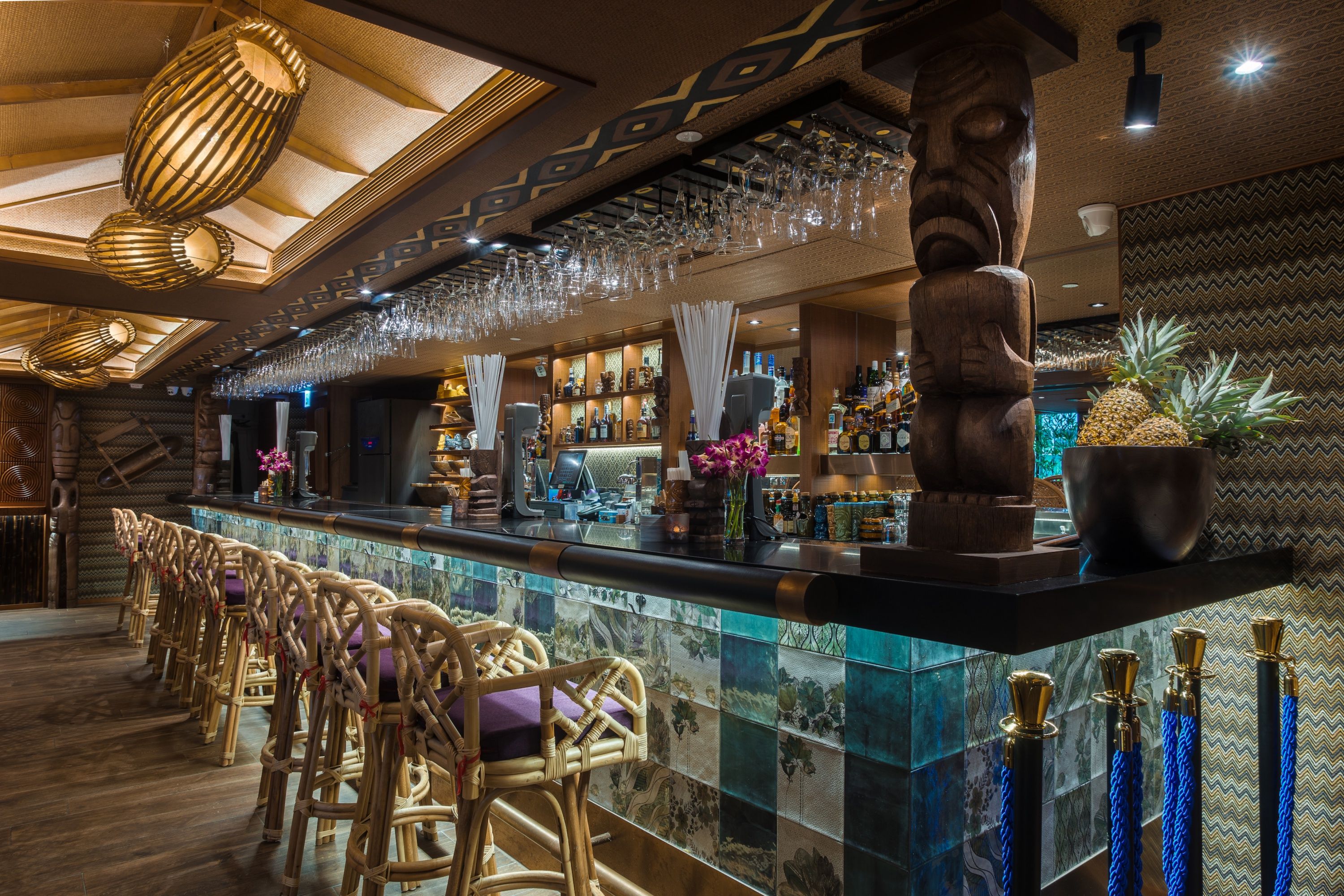 If the stresses of living and working in Hong Kong’s concrete jungle are getting you down, you can now head to an authentic tiki paradise for a much-needed respite. Tucked away on the third floor of Wyndham Street’s Sea Bird House, the quiet hallway of Wahtiki Island Lounge opens up through a wide door into another world: relaxed, island reggae beats set the mood in a tropical space outfitted with warm bamboo fixtures, peacock chairs with brightly coloured cushions, rattan and wood furniture. Near the door, strung up on the ceiling is a party canoe draped in leis — reserved for events where they serve a sharing cocktail for 40-plus guests. The vibrant atmosphere certainly sets the tone for what’s to come: arguably the best Mai Tai in all of Hong Kong. But to fully appreciate what that entails, a little brushing up on tiki history is in order.

The word ‘tiki’ may first bring to mind kitschy umbrella drinks, but in terms of delving deep into the roots of the bartending culture — one that is embedded in craft cocktail making — Hong Kong has only just begun to scratch the surface in recent years.

Named after the physical representation of a Polynesian god, tiki and tiki bar culture rose to prominence and popularity after the Second World War, in an era where people were seeking to rebuild their lives and build brighter futures. They pieced together their ideas of tropical escapes to create elaborate paradise-like restaurants to let off the pressures left over from the war. Thanks to pioneers like Don the Beachcomber and Trader Vic’s, tiki culture swept through America and Europe, but unfortunately went through a period of decline in the past couple of decades. But as people’s palates for complex cocktails grows, tiki is certainly making a comeback.

It’s this history and foundation behind tiki culture that remains relatively unknown to modern drinkers that inspired Philip Lee to open Wahtiki Island Lounge, but it certainly helps when you’ve grown up accustomed to the real deal. Lee’s father, Wah Lee, worked in London’s Trader Vic’s for 45 years, and helped to open Trader Vic’s all around Europe and the Middle East. Lee describes his kung-fu-practicing-father as “the Ip Man of Tiki Cocktails,” and indeed, the bar is a “last hurrah” dedicated to him — even the logo on their coasters, doors and walls bears a clever sea turtle design that sports his name, ‘Wah,’ in its Chinese character.

The staff, trained by Lee Senior himself, can create cocktails from scratch in seconds, rather than minutes as per the norm, Lee tells me, thanks to a special pouring technique that his father pioneered during his nights at the London Trader Vic’s, which invented the original Mai Tai (although some will argue that it’s Don the Beachcomber).

So when the Grandmaster of Tiki — coming from the birthplace of the Mai Tai — is here to pass on his tricks of the trade, you can’t not appreciate the finesse that goes into a combination as seemingly simple as a selection of rums, a house-blended orgeat syrup (the original recipe inspired by Trader Vic’s), plus a squeeze of lime.

Wahtiki’s barmen are quick and deliberate — you won’t find fancy cocktail flairing or bottle tossing here. When he pours the Mai Tai into the original double old fashioned glass, the amber liquid slowly settles into a beautiful ombre effect from light to dark. Lee tells me that the best time to drink it is about 20 seconds in, when the glass frosts over; when the flavours have settled. The first sip is nicely rounded, highlighting the dark rum flavour with a hint of sweetness. The second sip is even more mellowed out with a tart aftertaste of lime. The Mai Tai is sweet, but it’s got none of that pre-mixed, sickly pineapple syrup taste. “What’s essential to a good tiki bar is very cold, fresh ice, and consistent fruit juices,” says Lee.

For this reason, a special blast freezer was ordered specifically to make sure the staff have plenty of high quality ice all night, and in particular, it also houses the ice moulds for the Shark’s Tooth cocktail, a popular, but deadly drink. A highball glass is encased in a volcano-like (or tooth-like) mould decorated with grenadine stripes. Inside, it’s mainly a mixture of fruit juice, grenadine and over-proof rum (aka Bacardi 151), which interestingly gives off an anise-like flavour on the tongue, much like an absinthe-based drink.

The other signature cocktail is the Why Yes, a beautiful and comparatively tame drink made of gin, vodka, and passionfruit, perfect for those who aren’t too fond of rum. The drink was designed for and named after the initials of Lee’s wife, who some may recognise from tabloids as Hong Kong actress Myolie Wu Hang-yee. Garnished with a hibiscus, it may look harmless, but the massive goblet contains easily double the amount of alcohol in a cocktail elsewhere (as does most of what’s on the cocktail menu). The $160 price tag is surely bang for your buck.

Alongside authentic tiki cocktails, especially ones presented in tiki mugs, you’ll want to grab a bite here too. Back in tiki’s heyday, American Chinese food was what was considered exotic and trendy, so tiki chefs went from there. At Wahtiki, you’ll find spicy, exotic flavours like creole or jerk seasonings that attempt to surprise the finicky Hongkonger, housed in large, comfort food portions. Start by sampling the Pu Pu Platter (Hawaiian for appetisers), a fun lazy Susan wheel of finger food, ranging from a tender, smoky pork belly to satay to fried dumplings that you can char over a flame in the middle. From the mains, choose from the jerk chicken linguine, made with Caribbean-spiced grilled chicken with a creamy rosé sauce, or a range of Fijian curries, as well as the Wahtiki Island take on honey-glazed, sous-vide char siu.

Wahtiki Island Lounge aims to provide a vibrant, feel-good hang out spot to go against the dark, masculine cigar and martini bar that still prevails in the current cocktail scene in Hong Kong. Opened for just over a month, it’s proving itself already as a popular place to head with a small group of friends; or for larger celebrations, with the enticing selection of champagne cocktails and sharing platters that can serve up to 100 people. On atmosphere and the Mai Tai alone, it certainly deserves its growing reputation. And on that note, we can’t wait until our next sip — we’ll see you on Mai Tai Monday for its buy one get one deal.

Central Tiki Cocktails Tiki Bars Trader Vics Wahtiki Island Lounge
Evelyn Lok
Managing Editor
When not trying out the latest beauty and wellness trends, Evelyn is likely enjoying a perfectly balanced negroni or exploring some of Hong Kong's best new places to eat and drink. At Lifestyle Asia she covers everything from the biggest events in town to interviews with Hong Kong specialists, with topics spanning art, food and drink, health, tech, and travel.
Beauty Wellness Events Art Drinks
Sign up for our newsletters to have the latest stories delivered straight to your inbox every week.