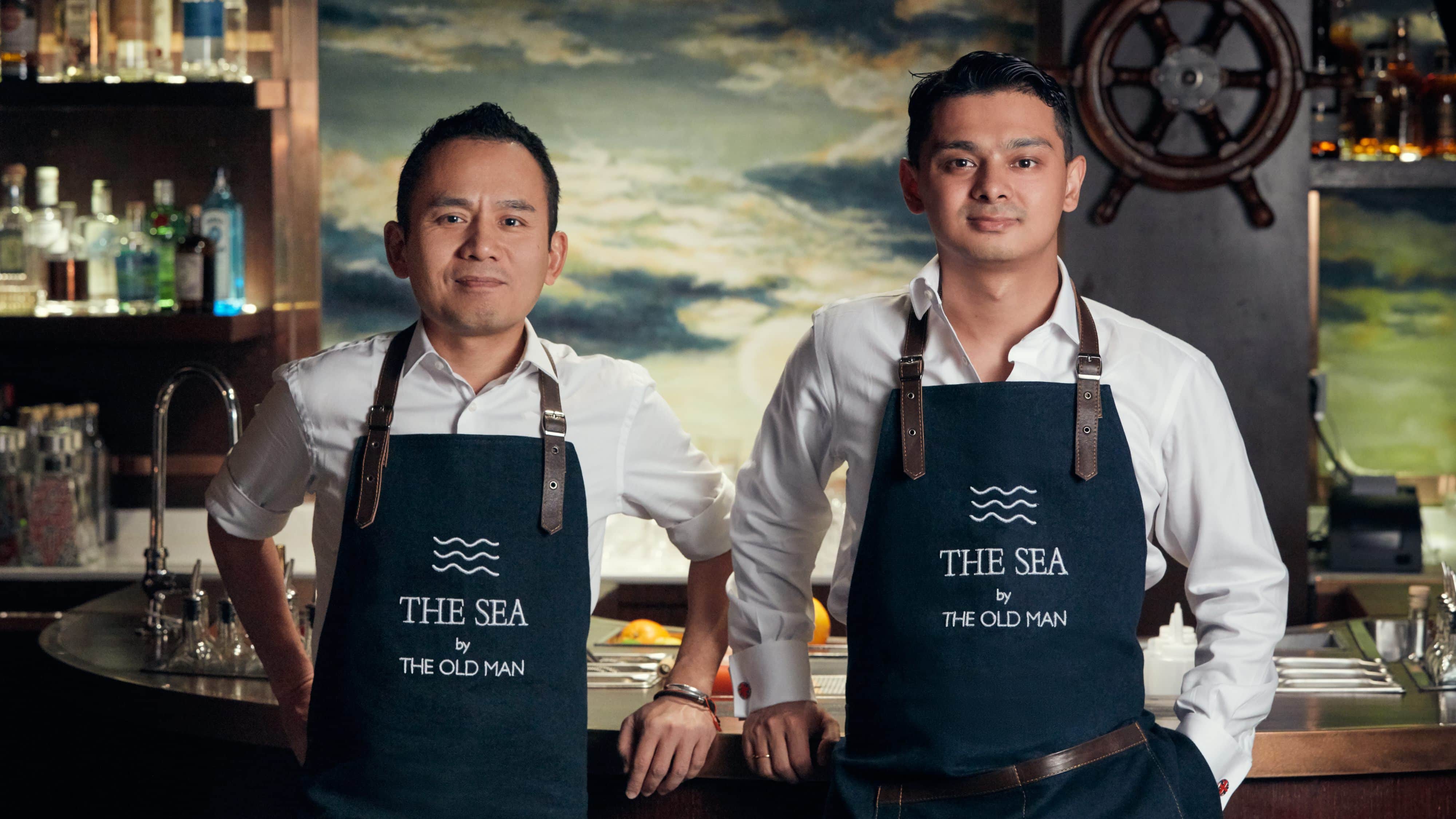 The Old Man and the Sea, Ernest Hemingway’s 1952 Pulitzer Prize-winning novel, captured the very essence of hard work, struggle and achievement, centring on an ageing fisherman and the greatest catch of his life.

Paying homage to the hit novel and its author, The Old Man opened in August 2017 to incredible triumph and international acclaim, swiftly rising in the ranks in some of the world’s most respected bar awards. Helmed by industry veterans Agung Prabowo, James Tamang and Roman Ghale, it currently stands at #10 on the World’s 50 Best Bars list, and it ranks #5 on Asia’s 50 Best Bars — the highest debut entry of 2018. (Its wild success also led to the opening of a new Singapore outpost earlier this year.)

Shortly after The Old Man debuted, there began to be talk of a second spot inspired by the other half of the novel’s title, especially as The Old Man seemed to grow more popular by the day. Now, more than a year and a half later, the day has finally come: The Sea by The Old Man is officially open in Sheung Wan, and we’ve got an exclusive first look at its stylish interiors and inventive cocktails.

Much like The Old Man, The Sea has a focus on innovative mixology and the use of intriguing ingredients, only here there’s a distinctly rustic, nautical touch. There’s a painted backdrop of a tropical sky serving as the bar’s main focal point, while the combination of mahogany wood, marine blue and brass tones evoke the inside of a boat — a design directly inspired by Hemingway’s beloved Pilar, a 38-foot vessel owned by the author for many years. With its cosy and intimate atmosphere, this stylish drinking den is a place where cocktail lovers can settle in for a while to enjoy the extraordinary beverages on offer.

Whilst The Old Man serves experimental cocktails that provide a taste of Hemingway’s oeuvre and personality — each named after his famous works of literature — The Sea has a list of 10 numbered cocktails (HK$95), each focusing on flavour profiles found in the ocean, particularly minerality, with highlighted elements such as rock, sea, peat and soil found in each drink.

Cocktail #1, a drink made with seaweed gin and lacto-fermented pineapple rind soda, is said to capture the ‘soul’ of the establishment. It’s said to be head bartender Agung Prabowo’s favourite. Other examples of signature drinks include Cocktail #2, which features a homemade honeyed dashi vodka matched with a liqueur made from mango sticky rice, the popular Thai dessert. Cocktail #3 pairs peanut butter bourbon with sour green banana to create an enchanting red concoction.

Cocktail #4 offers tart, bracing sips of kiwi rye whisky and sour sherry solution, which almost brings to mind the sensation of smelling the ocean spray. Cocktail #5 is perhaps for true adventurers at heart, balancing the comforting, rounding mouthfeel of peanut milk rum with the slight fizz of pineapple kombucha and banana wine.

All the cocktails are sugar-free, and the menu lists each drink’s nutritional value, antioxidant level and caloric density — perfect for the more health-conscious cocktail lovers among us. Without the ubiquitous use of simple syrup as a bar staple, the bar staff inevitably have to use more clever methods and ingredients to attain balance. Once again, Prabowo, Tamang and Ghale will perform cocktail wizardry behind the bar, featuring stunning creativity in ingredient choice, and sophisticated culinary methods including fermentation, sous-vide cooking and rotary evaporation.

There’s also a collection of three non-alcoholic cocktails (HK$85 each) for those who prefer a sober night: Summer in Bimini is so-named for Hemingway’s frequent escapes to the islands in the Bahamas, and features clarified pink grapefruit and salted Seedlip Garden 108. African Safari uses Seedlip Spice with an antioxidant-packed cordial of turmeric and tamarind. The Cucumber Lemon Shrub is mixed with salted Seedlip Garden 108, cucumber lemon shrub and lemonade — a drink that sounds ideal for Hong Kong’s hot summers.

“We present to you the final chapter of our journey with The Old Man and The Sea,” say founders Agung Prabowo, James Tamang and Roman Ghale. “We hope to provide Hemingway fans with a new and almost immersive experience of the book. Expect a more rustic and down-to-earth vibe, somewhere you can come by after a long day and feel right at home.”

The Sea by The Old Man
Address
2 Po Yan Street, Sheung Wan
Website
facebook.com
Phone
+852 2307 0030
Cocktails Bars First Look Hong Kong Bars Where to Drink in Hong Kong The Old Man Agung Prabowo Roman Ghale James Tamang The Sea by the Old Man Hemingway
Evelyn Lok
Managing Editor
When not trying out the latest beauty and wellness trends, Evelyn is likely enjoying a perfectly balanced negroni or exploring some of Hong Kong's best new places to eat and drink. At Lifestyle Asia she covers everything from the biggest events in town to interviews with Hong Kong specialists, with topics spanning art, food and drink, health, tech, and travel.
Beauty Wellness Events Art Drinks
Sign up for our newsletters to have the latest stories delivered straight to your inbox every week.