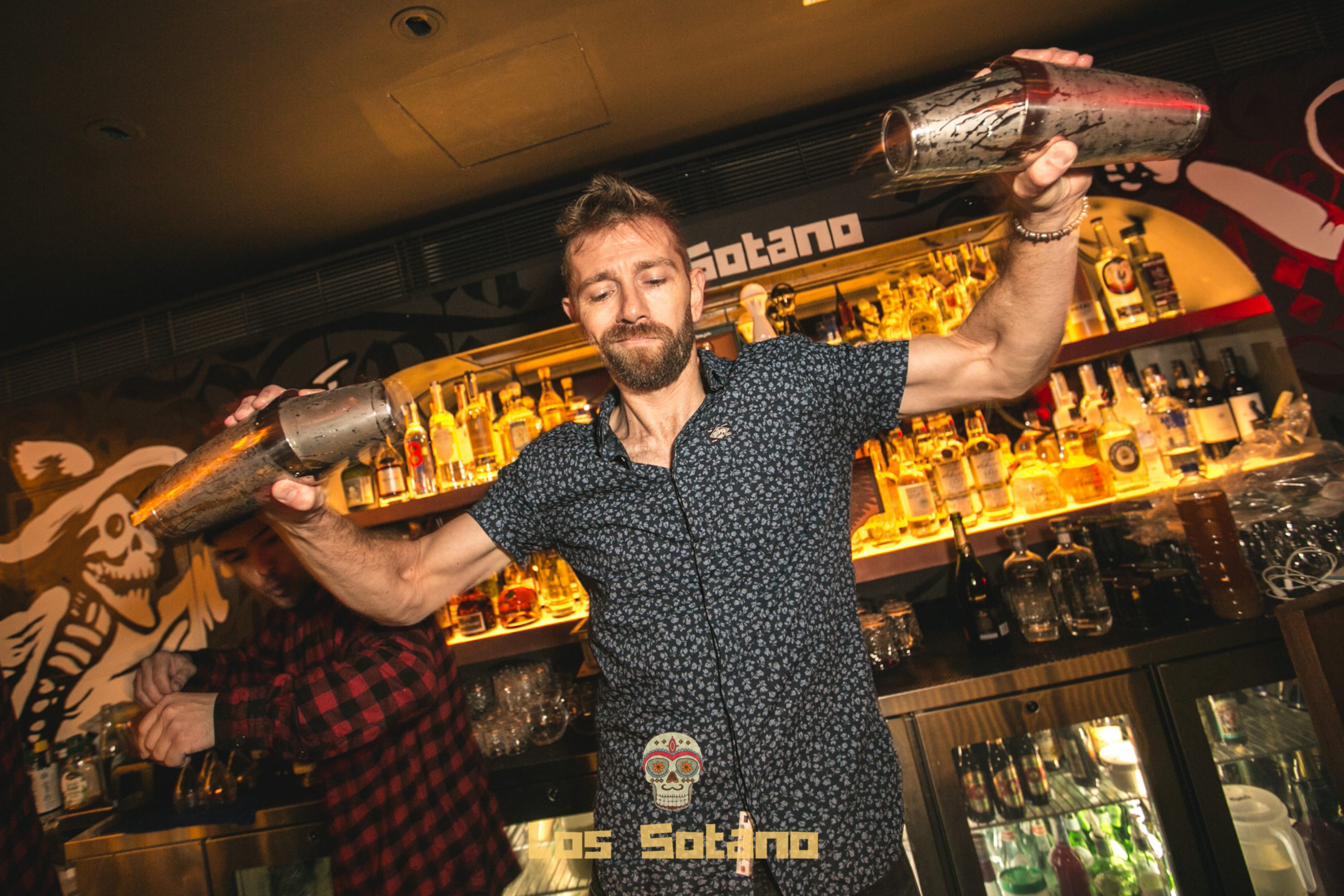 When you think of tequila, what might first come to mind is the way your face winds up after taking a shot of it. And then, you remember its smokier, more hipster brother, mezcal — that, you know to sip. But beyond its reputation as a university party drink, Hongkongers are just beginning to learn about the real nature and history of tequila: a sophisticated spirit that first started as ‘mezcal wine,’ created by the Spanish conquistadors in the 16th century by distilling agave.

The art of appreciating tequila is just starting to develop in Hong Kong, particularly with the opening of restaurant and tequila lounge Los Sotano last year. Boasting about 80 varieties of tequila and 35 mezcals (plus a massive Avión tequila barrel for its door entrance), it’s the perfect place to start exploring. We sat down with head mixologist and tequila expert Rob Kariakin to demystify everything from the making process to how great tequila is supposed to be consumed, to why one particular variety they offer warrants HK$3,000 a shot.

We know that tequila and mezcal are in the same family (tequila itself is a type of mezcal), but can you explain the difference between these two agave-based spirits?

The two-second answer: smoke. “Mezcal” tends to taste more smoky because the traditional way of cooking the agave piñas (hearts) for mezcal involve roasting and essentially smoking them in stone lined pits (or just holes in the ground) covered with thatch and dirt. For tequila, they’re steamed. The longer answer involves the fact that different species of agave are used (there are about 200 different species, but by law, tequila has to be made from Weber blue agave), that they’re (again by law) grown in different regions. Agave plants, like wine grapes, are greatly affected by the terroir of where they’re grown. Most of the tequila you’re going to find is produced by much larger distilleries, whereas mezcal still tends to be produced on a much smaller scale, for the moment at least.

People typically think of tequila as party shots with a slice of lime and salt, but how is good tequila supposed to be drunk?

Look, the first time I ever got drunk was on shots of cheap tequila, so I’m not going to pretend like that doesn’t have its place. But once you age out of trying to get as plastered as you can as quickly and cheaply as you can, you want to actually drink something you enjoy the taste of. And then you want to take your time with it. Watch when a guest buys me a shot or if I do one with the bar staff: I may take five minutes to finish it, as I drink it in sips. Because I really like the flavour. If someone orders a blanco, I’ll half-rim the glass with salt and lime to give them the option (but not for a reposado [rested] or añejo [aged]), but to me, the whole purpose of that is to disguise and mute the flavor of the tequila. Ditto with chilling. If you’re drinking quality stuff, why wouldn’t you want to taste it?

So in your opinion, what’s the best way to enjoy tequila?

Neat. The Spanish conquistadors who originally started making the stuff called it vino de mezcal (mezcal wine), with some of the better stuff coming from around the town of Tequila. There may be people who drink nice wine on the rocks or with salt and lime, but I certainly haven’t met them.

What should newbies look for when ordering (good) tequila?

Avión is a pretty good beginner’s tequila, especially for vodka drinkers. They grow their agave at about 2,000m above sea level, and the hot days and cold nights at that elevation lead to greater sugar production and hence a sweeter tequila. That combined with their proprietary slow filtration smooths out some of the quirkier aspects of tequila that beginners might not be ready for.

What makes an excellent tequila? Why are certain varieties more sought after than others?

Well, the most basic thing is that it has to be 100% blue agave. By law tequila only has to be 51%, meaning the rest can be sugar (which is, of course, faster and cheaper to grow). These are known as mixtos. They’re what we all drank at university, and you won’t find any of them at Los Sotano, where even our well tequila is 100% agave. After that, there are a lot of little things like the soil and weather conditions where the agave was grown, how many years it was allowed to mature before harvest, the talent of the master tequilero, et cetera. As for what makes one more sought after than another, it really comes down to taste, and that’s obviously a very individual thing. Bad tequila all tastes pretty similar, but good tequilas have a lot of flavour variety: they can be grassy, vegetal, caramel-y, chocolatey, peppery, have hints of vanilla, and so on.

We know traditional tequila is made by crushing cooked agave with a massive stone wheel, usually pulled by mules. What are some of the major ways of production for tequila, and how do different methods affect the flavour profiles?

There’s a range of different methods used at basically every stage of tequila production: brick ovens vs. autoclaves; the tahona wheel you mentioned vs. mechanical crushers vs. diffusers and sulphuric acid (yum!); copper pot stills vs. stainless steel tower stills; et cetera. The most obvious divisions are between the more time-intensive “traditional” methods often used by smaller producers, and the quicker, more industrial methods that allow the giants to do the volume they need. And they do a LOT of volume: some of the huge distillers produce as much tequila in a few days as a small distiller like Fortaleza produces in a year.

How do these methods affect the flavour? Think about your morning coffee: the push-button machine at 7-Eleven can make you a latte in six seconds, but a barista at Fuel or Coffee Academics will take five minutes. And even someone who doesn’t really drink coffee could instantly tell the difference from the look, the taste, the smell, the texture of the milk… It’s the same with tequila: sure, you can steam up a batch of agaves in eight hours with an autoclave, but it’s not going to taste the same as if they spent 72 hours in a brick oven.

How many types of tequila does Los Sotano offer? Is one type more suited for cocktails while others are made to be sipped?

We have about 80 tequilas and 35 mezcals. You’ll find blancos used in cocktails more often than reposados and añejos at most places, but that’s more about using less expensive ingredients. If you’re making a real cocktail, though, where you’re trying to feature and enhance the flavor of the base spirit, there’s plenty of reason to used aged tequila. And, if you’re really crazy (about tequila), even the extra añejos are fair game, like the Jose Cuervo Reserva de la Familia that we use in our HK$500 Carlos Slim margarita.

Speaking of margaritas, tequila’s classic drink: What makes a good one?

Well, the two most important things are a good tequila and fresh lime. If you walk into a bar and they’re using sweet and sour mix or store bought lime juice, just turn around and walk out. Or pineapple juice: I’m not going to name any names, but there’s a well known bar here in Hong Kong that lists pineapple juice among the ingredients in the classic margarita on their menu. Just… no. We actually take our limes so seriously that we ship them in from Australia. The next thing would be to sweeten it with agave rather than sugar, only natural with a spirit made from agave. Then there’s the orange liqueur debate: Tommy’s margaritas (just tequila and equal parts lime and agave) have become popular. They’re too sweet to me but the orange really rounds out the flavour. And of course, you need to give it a good shake to aerate it and give it that nice frothy feel in your mouth.

We know Los Sotano offers a notorious HK$3,000 shot of tequila -- can you tell us what warrants the price tag?

The Clase Azul Ultra. I’m starting to sound like a broken record, but time, mostly: they allow the agaves to mature for nine years before harvest, they cook them for a full 72 hours to convert the sugars, and they age the finished tequila for five years in old Spanish sherry casks (rather than bourbon barrels). The result is thick and rich almost like a cognac, with caramel and vanilla flavours and a bit of the smell of the sherry. Oh, and they bottle it in handmade ceramic decanters that take two weeks to make and are decorated with sterling silver, platinum and 24k gold. Is it worth it? Well, if you only have HK$3,000 in the bank, then probably not. But if you can afford it, it is pretty damn tasty. Put it this way, I’ve never said “no” to it.

To the seasoned tequila drinker, what is available at Los Sotano that would pique their interest?

Tons, actually. We weren’t satisfied with what we were able to get locally, so we actually ship in about half of our tequilas (and most of our mezcals) ourselves. On the more “classic” side, I’d suggest Siete Leguas to anyone who hasn’t had the chance to try it before. It’s the distillery where Patron was first made, before Patron opened their own giant place. It’s got a very peppery finish which I really enjoy. On the more “unique” side, we have the Don Julio 70, which is actually a clear añejo that they made for their 70th anniversary. They actually age the tequila for 18 months, then re-filter it through a process involving magnetised particles and free radicals. I can’t claim to understand it, but I do like to drink it.

With your mouth. Seriously: the only truly important thing you need to know is what tastes good to you and what doesn’t. From there, you might want to explore what it is that you like in the taste of one tequila that may be different than what you like in the taste of another. Flights are a great way to do both: three different tequilas served together so you can compare them side-by-side. We have several flights on the menu at Los Sotano, each featuring tequilas chosen specifically to highlight the differences between them. And we’ve even added one more as an off menu item just for anyone reading this:

This story is presented by Los Sotano