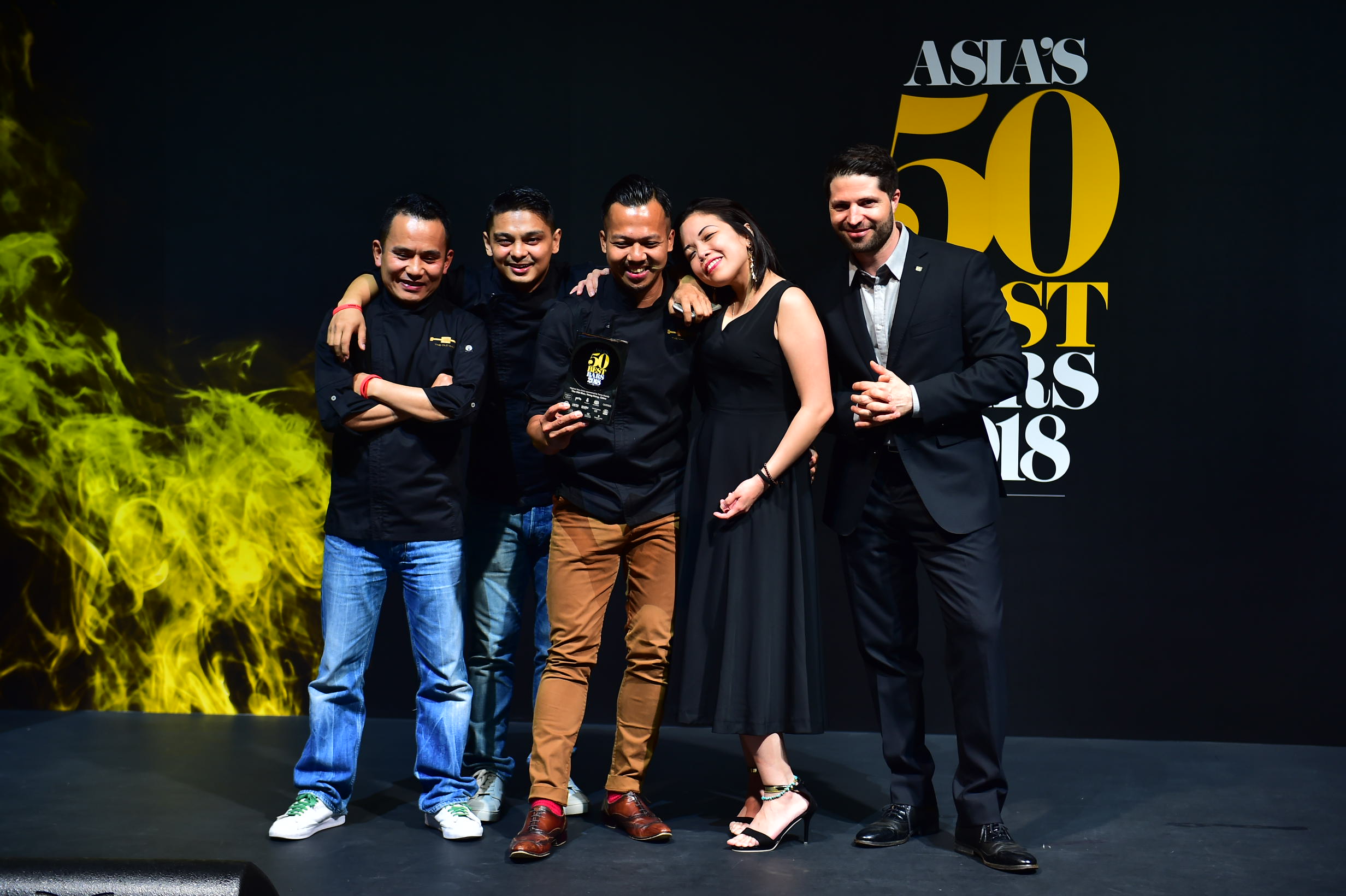 The results were announced tonight at an industry star-studded reception inside Singapore’s Capitol Theatre, with the stylish Manhattan bar inside the Regent Singapore nabbing the #1 spot for the second year running. For Hong Kong, all eyes were on the Ernest Hemingway-themed bar The Old Man, which opened in August 2017 just in time to make an incredible (and well-deserved) debut on this year’s list at the #5 spot — picking up the coveted Highest New Entry Award. Rounding out the top five are Taipei’s Indulge Experimental Bistro, which jumps three spots from #5 last year; Speak Low in Shanghai coming in at #3; and Atlas in Singapore climbing 8 spots to reach #4 on the list.

The rest of the top 10 were filled out with recurring entries from last year’s list, with High Five in Tokyo dropping from #3 to sit at #6 this year; Singapore bars Tippling Club and Native showing a solid ranking at #7 and #8 respectively; Mandarin Oriental Bangkok’s The Bamboo Bar giving Thailand a spot in the top 10 at #9; and finally, Lobster Bar & Grill in Shangri-La Hong Kong holding strong at the #10 spot for two years running.

Hong Kong is well represented on this year’s list, with a total of seven bars. The Old Man is the only newcomer on the list, while return awardees include Lobster Bar (#10), Stockton (#11), Quinary (#15), Zuma (#18), 8 1/2 Otto e Mezzo (#24), and The Pontiac (#31). Meanwhile, The Chinnery at Mandarin Oriental Hong Kong and Dr. Fern’s Gin Parlour, which placed #42 and #48 respectively last year, dropped off the list altogether in 2018. Overall, Singapore and China tied for the most number of bars on the list (12 each), with the other seven countries represented including Japan, Korea, Philippines, Indonesia, Malaysia, Taiwan and Thailand.

Asia’s 50 Best Bars is compiled from the votes of the Asia’s 50 Best Bars Academy, which is comprised of more than 200 renowned bartenders, bar managers, drinks consultants, writers and experts, historians and mixologists from across Asia. Each voter casts a total of 7 votes based on their best bar experiences from the previous 18 months, with 3 of those votes required to be outside the voter’s country of residence. This year marks the first year in which the voters list has not been publicised, in an effort to retain their anonymity going forward.

Here’s the full list of winners, with bars in Hong Kong in boldface:

Hong Kong Asia's 50 best bars Hong Kong Bars best bars where to drink asia's 50 best bars 2018 asia's best bars award ceremony
Leslie Yeh
Editor in Chief
Having worked as a lifestyle editor for almost 10 years, Leslie is thrilled to be writing about the topic she loves most: wining and dining. When she's not out pounding the pavement for the latest new restaurant opening or tracking food trends, Leslie can be found at home whipping up a plate of rigatoni vodka and binge-watching Netflix with a glass of Sauvignon Blanc in hand.
Dining Restaurants Food Trends Drinks Travel