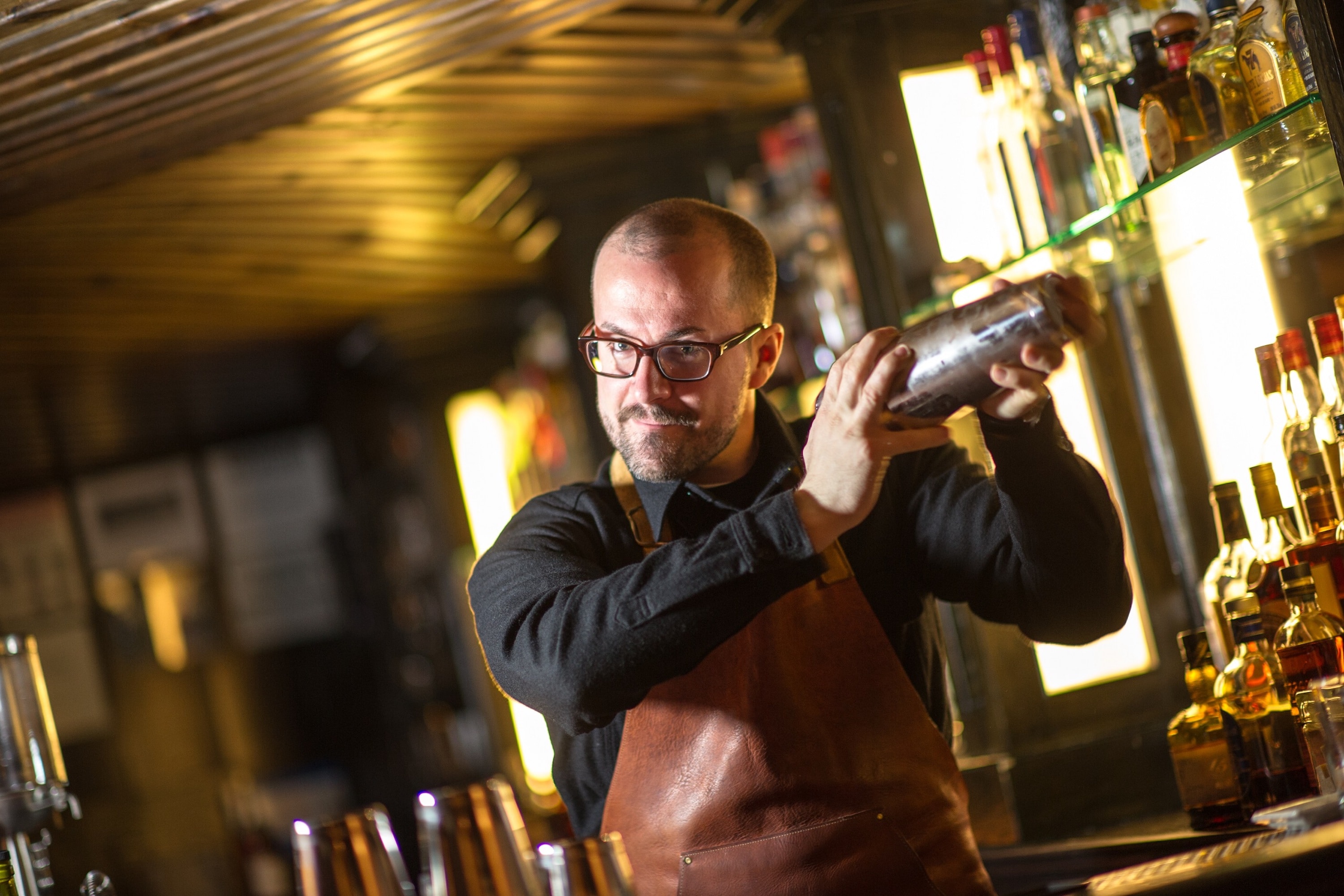 Q&A: Jim Meehan on returning to PDT Hong Kong and why you don’t need to “get” mixology

Food & Drink
Q&A: Jim Meehan on returning to PDT Hong Kong and why you don’t need to “get” mixology
Share this article
Next article

If idle hands are the devil’s workshop, then Jim Meehan is verging on saintly. Despite opening PDT Hong Kong (to much fanfare) a mere 10 months ago, the award-winning mixologist has shown no signs of creative lethargy. Around the same time that he was bringing his acclaimed NYC speakeasy to Hong Kong and tending to Heisler Hospitality’s (sadly now-defunct) Prairie School in Chicago, Meehan was also putting the finishing touches on his self-titled Meehan’s Bartender Manual — a 500-page magnum opus which rigorously unpacks every element that goes into the creation of an industry-level bar. Variously described by hospitality luminaries as “absolutely essential reading”, the guidebook went on to win the coveted James Beard Foundation Cookbook Award (Beverage Category) earlier this year. Now, having recently been honoured as a guiding light in America’s culinary culture, Meehan is returning to PDT Hong Kong — his home away from home, nestled deep within The Landmark Mandarin Oriental — for eight days of original and peerless mixology.

From 15–23 October, discerning boozehounds will be able to catch Meehan behind the proverbial telephone booth as he makes a plethora of new and signature PDT tipples; complemented by six new dishes (including desserts and yet another incarnation of the famous PDT hot dog) from LMO Culinary Director Richard Ekkebus. Ahead of his highly anticipated return, we sit down with the cocktail maven and now two-time author for an exclusive discussion about everything from the importance of a well-designed menu to why he’s all for a relaxed approach to “educating” drinkers.

PDT Hong Kong has been open just shy of one year. Is the venue up to your standards?

After a wildly successful pop-up two years ago, we had high hopes for the brick and mortar bar. So far, I feel like we’re on track to achieve our goals.  Nelson Chow built us a beautiful space reminiscent of our New York location — with improvements in lighting, decoration and acoustics — while Richard Ekkebus’s Hong Kong-inspired food menu is delicious, fun and prepared with the same fanatical attention to detail as the cuisine in his Michelin-starred restaurant upstairs. It’s taken some time for our New York transplants — GM Malaika Suarez and Head Bartender Adam Schmidt — to adjust to their new home within Mandarin Oriental, but with each passing week they feel more comfortable, and tha

t’s how we need to approach the business if we want it to be successful in the long haul.

Based on your personal observations, do you feel Hong Kong has reached saturation point when it comes to craft cocktail and mixology-focused bars?

Not even a little. Hong Kong is arguably the most cosmopolitan city in the world: the cocktail — and this town’s interest in it — is here to stay.

You've said in interviews that you believe bartending is more of a professional craft than an art form. In light of the snobbery and pontificating that sometimes surrounds mixology, do you feel like more bartenders ought to embrace your philosophy?

When I was younger, I focused on leading by example, hoping others would follow. As I’ve gotten older (and matured a little bit), I’ve realised you need to really work at motivating constituents to see the world from your viewpoint. You need to show drinkers why you feel a certain way — not just walk there and hope people will follow. I’ve spent the last four years writing and promoting a new book to further this exact endeavour.

Education is becoming an increasingly value added part of cocktail culture: do you feel like its played a role in the service model at PDT Hong Kong?

Education and mentorship are vital for our team internally, but most of our guests come for entertainment purposes. Ultimately, our mission is to expose customers to great food, wine, spirits, beer and cocktails. If and when they’d like to learn more about all of these, we’re always ready to indulge their curiosity.

How do you and your team encourage patrons to engage more proactively with the process of understanding cocktails?

Besides staff engagement, the menu is the most important guest interface. Putting that to one side, aesthetics, organisation, voice and physical objects themselves all affect our guests’ perception of PDT and the values we operate by. To be frank, I don’t think a guest needs to understand a drink: they just need to enjoy it.

Do you and your staff keep an eye on what other venues in Hong Kong are doing?

To be honest, no. When I’ve been in town, I’ve hunkered down at The Landmark Mandarin Oriental to spend as much time as I can with the team and our guests. I think it’s vital to build relationships in the community and support your colleagues citywide — and I’m woefully delinquent here in Hong Kong — but every bar has its own vision (in terms of both style and substance). If I get too caught up in what our neighbours are doing, I risk jeopardising our unique voice and vision.

Do you feel that after a year of business PDT Hong Kong has developed its own unique reputation, as distinct from PDT New York?

PDT New York and Hong Kong each have their own unique identities. Thanks to Mandarin Oriental, our Hong Kong location is a world class outpost situated amid some of the most desirable real estate worldwide. What remains to be seen is how its identity will evolve and grow over the years. Few would argue that the original PDT is a New York landmark, but that isn’t something that happened overnight.

What are some of the ongoing challenges associated with the Hong Kong market?

You’re only as good as the people you work with, and we’ve been very fortunate to keep the core of our team together for the first year. In the years ahead, retaining that talent and recruiting new team members when there’s turnover will make or break our bar. Hong Kong’s high cost of living, especially for employees who earn a modest income, is among the biggest related obstacles to doing business here.

What do you envision for PDT Hong Kong in the short to medium term? Can we expect a continuing evolution of the cocktail menu? Maybe even an expansion of the venue's square footage?

The menu will continue to evolve. Our approach is always to keep guests’ favourites whilst cycling the less popular drinks off to be replaced by seasonal and limited edition offerings. Thankfully, there’s no room for a physical expansion, so we’ll remain an intimate little bar — we prefer it that way!

What can you tell us about the creative process behind the three new cocktails being added to PDT Hong Kong's menu?

I’m pleased to confess that I had very little to do with the development of our new drinks. Jeff Bell and I fly in on a quarterly basis to work with Adam and Chanel on new drinks. These two new offerings came after Jeff’s latest visit. He and I could write the whole menu if required, but the goal has always been to give Adam and his team a platform to showcase their talents as mixologists, and I’m proud of their efforts to date.

Published last year, your book “Meehan’s Bartender Manual” is already being referred to as “the go-to reference for another generation of bartenders”. It’s obviously doing very well in North America, are you excited to see how it’ll be received in Hong Kong?

I am! We only had a handful of copies on-hand for my previous visit, so I’m hoping we have more, and that both guest and industry interest will pique. With dozens of titles being published internationally each year, it’s more difficult to capture the public’s attention than it was back when my first book — The PDT Cocktail Book — was released. In 2011, the field was much less crowded. Hopefully, word of mouth and the book’s various accolades will bring renewed interest during my forthcoming visit.

Catch Jim Meehan at PDT Hong Kong from 15–23 October. Copies of Meehan’s Bartender Manual (purchased in-house) will be available for signing on 21 October. For reservations and book signing inquires, call +852 2132 0110 or email lmhkg-pdt@mohg.com.