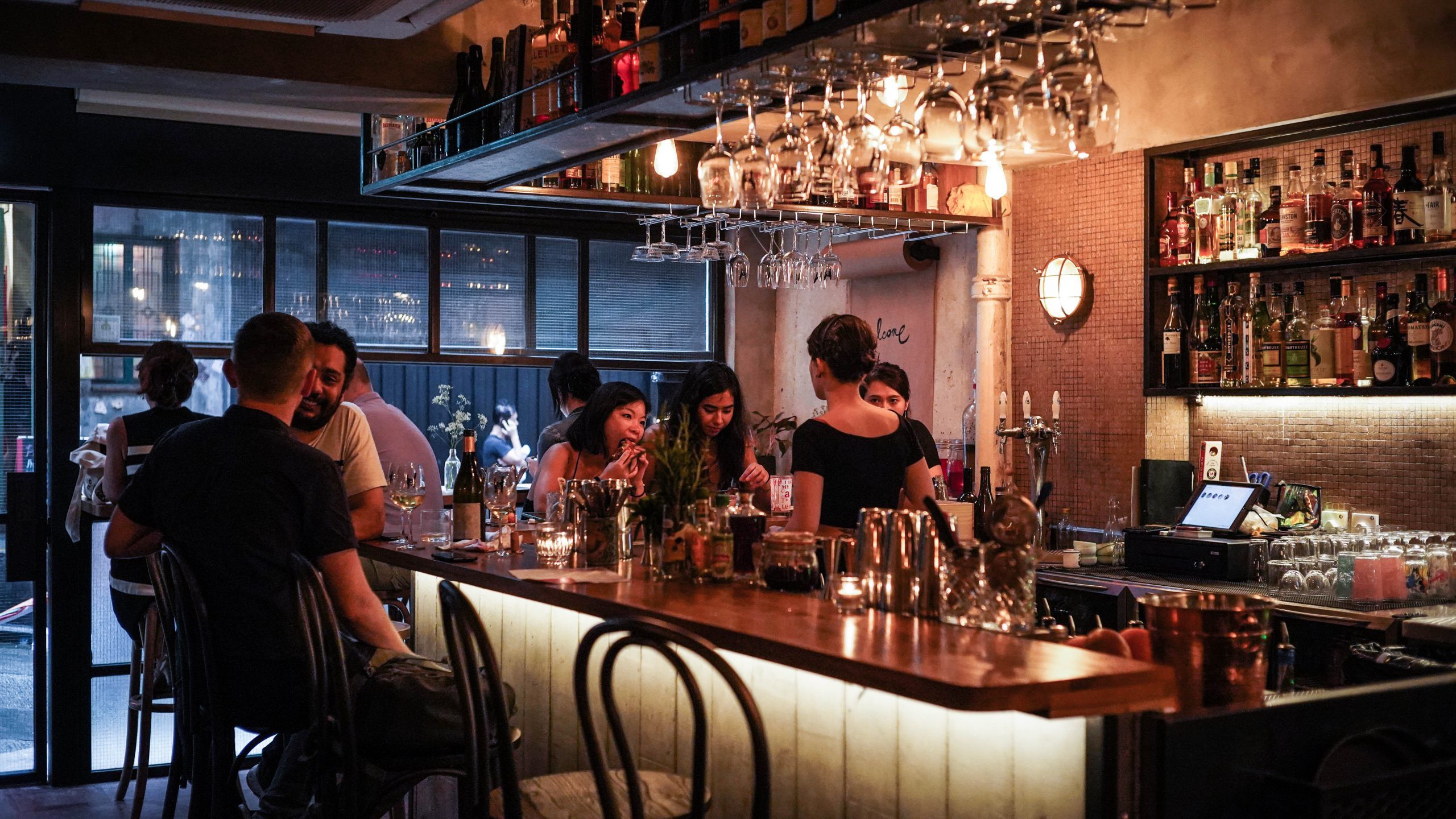 There’s a new cool kid on Peel Street: Shady Acres is just over a week old and it’s already packed to the rafters on a Friday night — and for good reason. With an eclectic wine list of over 200 handpicked bottles; a concise yet appealing menu of bar bites and larger, shareable plates; and a list of playful cocktails that are well-considered without being self-serious, Shady Acres exudes an easy, undeniable likeability (particularly in a city like Hong Kong, where wine snobbery is all too prevalent). And that’s even before knowing they do not one, but two happy hours every day: 5–7pm and 11pm–1am — write it down.

At the helm are business partners and JIA Group alums Mike Watt and Ryan Nightingale, who struck out on their own after securing the location at 46 Peel Street. Hong Kong’s boozehounds will recognise the two: Watt was formerly the resident wine expert and GM at 208 Duecento Otto and Fish School; Nightingale headed up the bar programme at Ham & Sherry and Aberdeen Street Social. A deal with an unnamed restaurant group allegedly fell apart several months before opening, but Watt and Nightingale pushed through to bring their passion project to fruition.

Nightingale has brought his former Aberdeen Street Social team to head up the food part of the equation here, with Boris Yu and Max Wong designing the menu, and Stella Lim behind desserts. As such, a friendly atmosphere is immediately evident once you step inside. Warmly lit and unpretentious in decoration, a long butcher-block bar and open kitchen take up most of the space where you can perch and watch your bartenders and chefs in action. Under your feet, the terracotta tiles have been retained from the bar’s former life as a silk flower store. The distressed concrete walls look as if they’ve undergone minimal treatment — it’s a lived-in, homey ambience that makes you feel like the bar has always been there.

There’s no need to sift through a tome to pick your poison: Shady Acres currently has a handpicked shortlist of 23 bottles for your perusal, including rosé and orange wine, and an additional 19 options available by the glass. They’re not your typical Cabs and Pinots either, with varietals spanning from South African Chenin Blanc to Beaujolais (Gamay) to Sangiovese blends from Tuscany.

Looking to explore a bit? The full wine list spans over 200 mostly boutique names, with dedicated sections divided by flavour profile as well as terroir. Illustrated by wine writer Elaine Chukan Brown, the list makes you feel like you’re flipping through band flyers rather than a cellar collection, with engaging descriptions that help both beginners and connoisseurs discover funky new labels. While the selection is expected to change regularly, there’s currently a whole page dedicated to Rieslings, and a decent list of Aussie-made Italian varietals: The Unico Zelo “Jade & Jasper” Fiano (HK$85/glass), for example, was a juicy, tart and lively start to a mid-week drinks session after work.

Wine hipsters will also want to take note of categories such as Pét-Nat (aka Pétillant Naturel), a pre-Champagne way of making natural sparkling wine which is currently experiencing a resurgence. Like something you had? Wander over to the right side of the bar, where a library of bottles available for retail awaits.

Those who remember Ryan Nightingale’s presence at Ham & Sherry will also remember the wildly successful cocktail menu at its speakeasy annex, Back Bar, where the drinks were based off of bootleg DVDs. Highly memorable cocktails offered cheeky nods to Hollywood films, including the Ron Burgundy, a rum-based tipple based on 2004 comedy Anchorman — it was served in a “Sex Panther” perfume flask (that, 60% of the time, works every time). There was also There’s Something About Sherry, a drink served in a hair gel container, referencing a pivotal gag from the Ben Stiller/Cameron Diaz film.

Naturally, Nightingale’s cocktails pull you in with inside jokes. I Want It That Whey (HK$90) balances Backstreet Boys references with brown-butter whisky and citrus-split milk; The Typhoon 10 features “culturally-confused rum,” rosé vermouth, and reinforced glass (taped in X’s, I’m sure). We tried the Deniable Plausibility (HK$75), an icy, delightfully crushable, cachaça-based tipple mixed with strawberry-soaked Aperol (and optional blackout, as per the menu description — it’s so drinkable it’s potentially lethal). The Retrograde Lemonade (HK$85), meanwhile, tastes like what you want your post-gym tonic to be — there’s enough ginger and apple juice to make it seem healthful and innocent, but it’s improved with vodka, dry vermouth and a deliberate dose of childhood nostalgia thanks to the kiddy glass it’s served in.

Lest we forget to point it out, the great value at Shady Acres is an added bonus. Beers at happy hour can cost just HK$20, wines by the glass don’t go over HK$120, and the most expensive cocktail is HK$95. Dishes, on average, won’t set you back more than about HK$90, which all goes to show that in a city that equates lavish credentials with quality, a roaring good time doesn’t need to hurt your wallet.

Our only gripe? They only accept walk-ins, so you’ll have to duck out of work early to secure a good spot (although there’s always that second happy hour). In addition to offering exceptional value on a street that’s already popular with the after-work crowd, Shady Acres exudes a conviviality that’s downright charming. Beyond the whimsical menus and intriguing wine selection, it’s the genuine feel of the place that wins us over. It’s all part of Shady Acres’ welcoming raison d’etre, an indication that this indie wine bar’s off to a great start.

Cocktails Wine Bars Where to Drink in Hong Kong Shady Acres Mike Watt Ryan Nightingale
Evelyn Lok
Managing Editor
When not trying out the latest beauty and wellness trends, Evelyn is likely enjoying a perfectly balanced negroni or exploring some of Hong Kong's best new places to eat and drink. At Lifestyle Asia she covers everything from the biggest events in town to interviews with Hong Kong specialists, with topics spanning art, food and drink, health, tech, and travel.
Beauty Wellness Events Art Drinks
Sign up for our newsletters to have the latest stories delivered straight to your inbox every week.