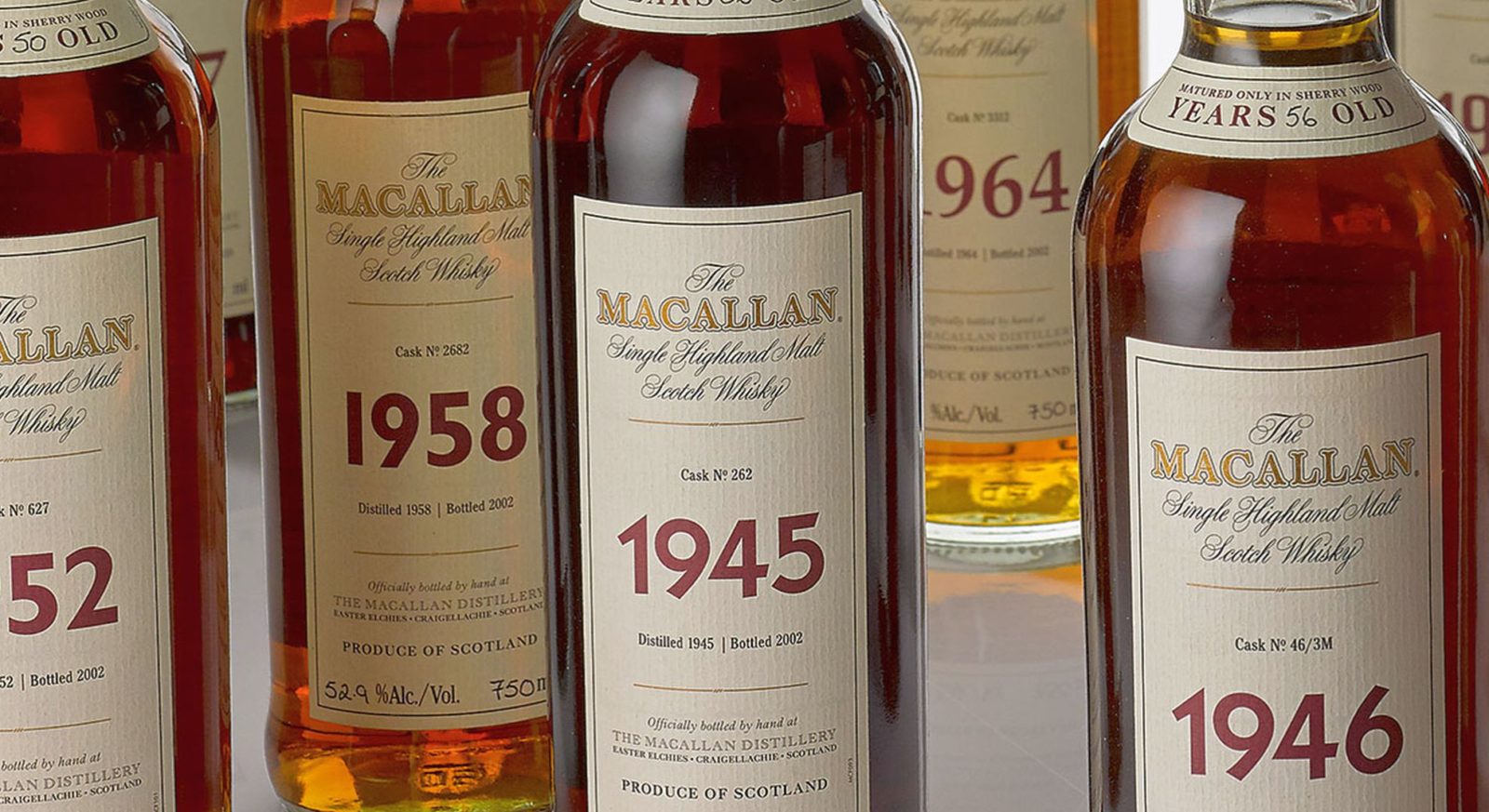 The 56 year old single malt, being sold as part of a consignment from Californian retailer Wing Hop Fung, is expected to fetch in excess of HK$380,000.

It shouldn’t come as a surprise that, in recent months, most of the global populace has been staring (even more intently than usual) into the digital void — preferably whilst clenching a dram of something strong in hand.

Like most auction houses, Sotheby’s is acutely aware of this and is poised to make the most out of the current climate with a variety of online-only auctions — starting this month with a very special spirits sale spearheaded by Macallan. 30 bottles are being offered on consignment from Californian retailer Wing Hop Fung, covering five decades of the ‘Fine & Rare’ series (1937-1972) including the celebrated Macallan 1945. According to Sotheby’s, the present example was purchased by Wing Hop Fung directly from the Macallan distillery and has been warehoused, in its original wooden packaging, away from public view for the last 15 years. This bottle was drawn from cask #262 in 2002 and is one of only 152 examples available globally.

Although Sotheby’s have chosen to lead the sale with Wing Hop Fung’s ‘Fine & Rare’ collection, there are a number of other choice Macallan expressions up for purchase that enthusiasts would do well to keep a close eye on. Notably, these include a 57 year old single malt that was released as part of the Lalique ‘Six Pillars’ collection — the second oldest vintage ever offered at retail, predicted to fetch as much as HK$620,000. Other honourable mentions include half a cask (mixed) of Pappy Van Winkle, a 1990 bottling of ‘The Cask of Yamazaki’ and a 40-year-old special release by Highland distiller Dalmore.

‘The Macallan Fine & Rare Collection from Wing Hop Fung + More’ auction is on now until 20 April 2020 (9:00am CST). To browse the catalogue, or place a bid visit Sotheby’s online.

You might also like…
Food & Drink
This Dalmore 51, the Scottish distillery’s first release of the new decade, could be yours for a cool HK$552,000
Food & Drink
Support Hong Kong’s drinks industry with these delectable wine and cocktails, delivered straight to your door
Food & Drink
Bar review: The Diplomat pays tribute to classic cocktails with comfort and class
Food & Drink
Your guide to whisky investment in 2019, according to expert Charles Maclean
Drinks Whisky The Macallan Sotheby's sotheby's New York Food & Drink
Randy Lai
Editor
Having worked in the Australian digital media landscape for over 5 years, Randy has extensive experience in men's specialist categories such as classic clothing, watches and spirits. He is partial to mid-century chronographs and a nice chianti.
Style Watches Drinks Tailoring Travel

Kicking Off: Six of the best sneaker drops this March

Where to drink in Hong Kong in March 2021