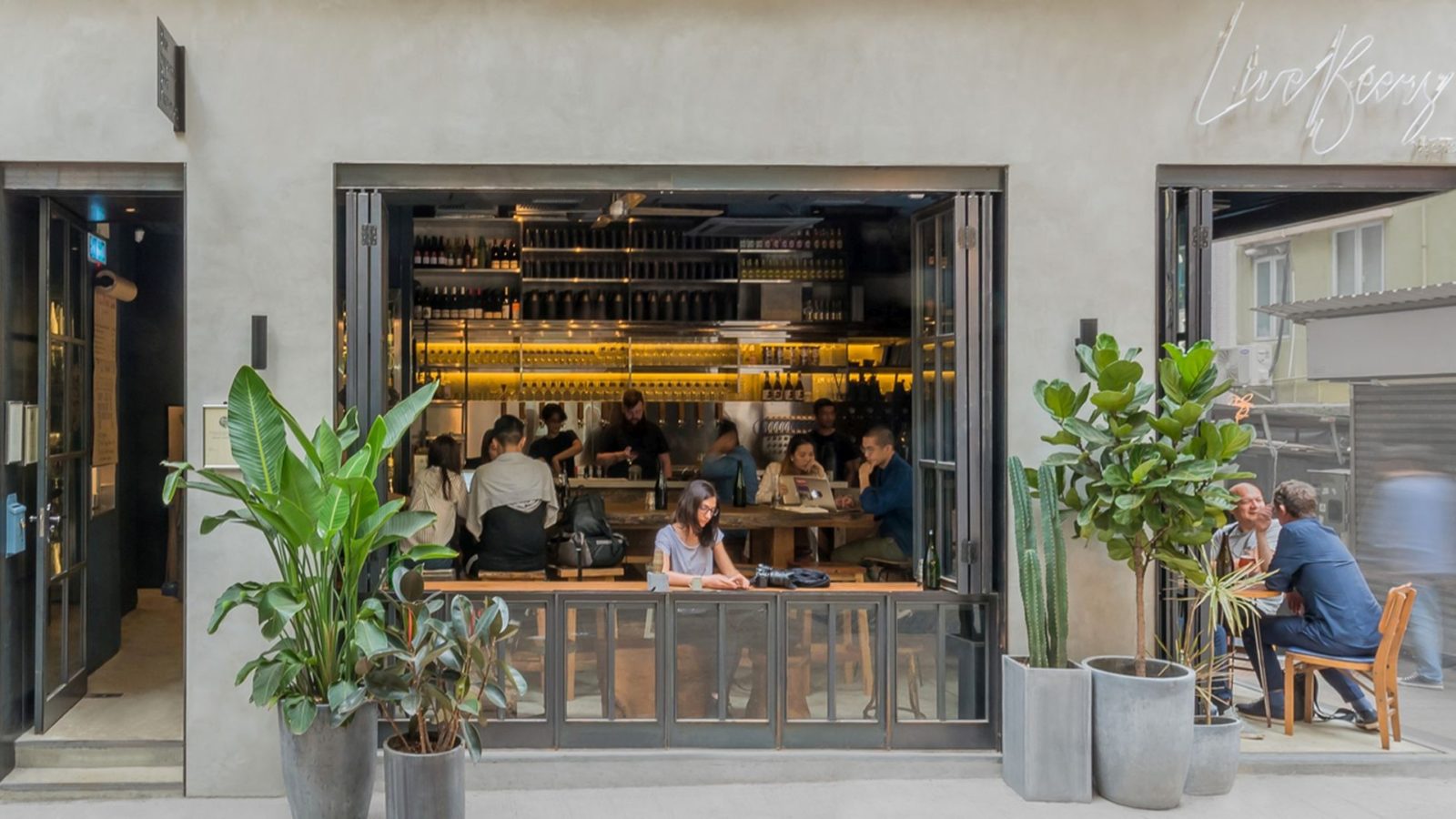 These are Hong Kong’s best restaurants for beer lovers

Love a laid-back lager or IPA? Forget wine pairings and cocktail lists — these restaurants are the top spots in Hong Kong for hopheads.

Microbreweries and Hong Kong-made craft beers exploded onto the city’s drinking scene since 2012. They aren’t so much a growing trend anymore as they are an established part of Hong Kong’s F&B scene. As a result, beer is no longer a casual afterthought when it comes to restaurants’ beverage programmes, but rather an integral part of the overall offering.

Whereas beer lovers used to be relegated to drinking in sports bars or pubs, today there’s a whole host of brew-focused restaurants and taprooms where the food is just as serious as the pints being poured. Here are our picks for restaurants where the beer makes it worth the trip.

Occupying an inviting corner spot a stone’s throw from the Cat Street Antique Market, this Sheung Wan hotspot has redefined what a gastropub can be with its combination of creative dishes and complex beers. A self-described modern American bistro, Blue Supreme offers a focused yet constantly evolving menu, though crowd favourites like the duck confit burger seem to always be available.

“Live Beers Here” reads the sign above the entrance, and that’s exactly what you’ll get: a selection of Belgian lambic, wild sour, and farmhouse craft brews that have been bottled with live yeast and culture to produce a second fermentation and that characteristic cidery funk. If you’re more into hoppy beers, there’s also a variety of Hong Kong-made ales and IPAs on offer.

Pizza and beer — name a better duo. The perfect pairing reaches its apex at this welcoming Kennedy Town eatery, which is a collaborative effort between the founders of Young Master Ales Brewery; Patrick Gatherer, former manager of The Globe; and Paul Gelinas, the designer behind Tai Hang’s Second Draft. Unsurprisingly, the majority of the 14 beers on tap are Young Master brews, but you’ll also see local breweries like Heroes Beer Co and Yardley Brothers on the list, which regularly

The signature sourdough pizzas are made with a sourdough starter that originated from Young Master’s sour beer production, resulting in chewy crusts that form the base of beloved pies including the Sichuan-inspired Ma-La-Li-Da and the char siu-topped Bak Gwei. Elsewhere on the menu, small plates such as latkes, vegan ravioli and typhoon shelter-style sweetbreads prove this isn’t your average pizzeria.

Also backed by Young Master Ales, this hipster haven in the quaint enclave of Tai Hang is a bustling beer hall with 26 taps on three different keg systems, not to mention a selection of takeaway cans and bottles. There’s always a mix of local and imported beers, and while Young Master’s varieties feature prominently, you’ll also see the likes of Hong Kong craft breweries like Carbon Brews and Double Haven. With three different pour sizes to choose from as well as tasting flights, it’s easy to sample a wide variety of beers, and you can order to-go cups and growlers of your favourites.

The design is 100 percent Hong Kong, and so is the East-meets-West menu, curated by chef May Chow. Popular dishes include the cumin- and chilli-dusted Tai Hang fries, flower crab pasta and made-for-Instagram mapo burrata: a ball of creamy cheese topped with a Sichuan-spiced pork ragout.

This cavernous Kennedy Town space, helmed by Australia’s Little Creatures Brewery, doubles as a restaurant and a microbrewery that turns out a regularly changing selection of five beers specially made for the Hong Kong market. Other Little Creatures varieties — some available year-round, others seasonally — are offered in bottles and on tap, and they’re best sampled six at a time on a wooden tasting paddle. In addition, guest taps add a bit of variety, meaning you’ll have around 20 different brews in total to choose from.

The food isn’t groundbreaking but it’s well executed, with a focus on crowd-pleasing favourites like burgers, salads, pastas and pizzas. Breakfast and brunch are popular for the requisite smashed avocado on toast, but the highlight of the week, arguably, is Taco Tuesday, when HK$250 gets you two hours of unlimited tacos and beer.

To scratch that classic English pub itch, head to The Globe, long considered the standard-bearer for beer culture in Hong Kong. The vibe is homely and convivial, with a mix of booth seating, sofas and communal tables where you can rub elbows with fellow hops lovers. The selection of 18 beers on tap changes every few days — great if you appreciate novelty, slightly irritating if you prefer consistency — but you’ll always find both locally produced and international brews, especially from the UK and Belgium. What’s more, there’s a selection of 100 bottles to choose from.

The menu includes classic, well-made pub fare like sausage rolls, Scotch eggs, fish & chips and bangers & mash, but there are some surprises including vegetarian and vegan dishes. For many patrons, however, a trip to The Globe means one thing: a savoury pie to pair with a perfect pint, followed by a cheeky English dessert. Oh, did we mention that happy hour goes from 9am to 8pm every day?

Perched on the steep slope of Peel Street, this vibey, blink-and-you’ll-miss-it spot is the definition of industrial chic, with exposed concrete and beams contrasting with neon signs, Edison bulbs and colourful murals. Hong Kong-made craft brews are the focus here, with a rotating selection of 12 beers on taps from operations like Lion Rock Brewery, HK Lovecraft, Citibrew and Mak’s Brewery. Locally produced bottles and cans are available as well.

The food goes above and beyond your average pub grub, with a one-page menu of small and large sharing plates that might include salmon tartare served with crispy wonton chips, linguini with seared shrimp in a crab roe sauce and ‘ho L jeng’ golden crispy chicken — so good it might cause a few expletives as the name suggests. The signature char siu rice, made with Iberico pork that’s been slow-cooked for 24 hours, is always outstanding.

Southern-style fried chicken meets craft beer at this laid-back, two-storey venue in Wan Chai, sister establishment to The Roundhouse – BBQ + Beer in SoHo. Like its sibling, the space is relatively no frills, though the exposed pipes leading from the taps to beer storage upstairs inject some visual flair. There are 32 beers on tap, representing a global selection that always includes Hong Kong and American breweries.

Buttermilk-marinated fried chicken is the star of the traditional menu, along with Southern sides like fried okra, black eyed peas, mac and cheese and cornbread hush puppies. Chicken salad and fried catfish add some variety, but we’re partial to the indulgent Big Tex Tender Sandwich: strips of fried chicken stacked with lettuce, bacon and pickles on thick-cut Texas toast, served with a side of white gravy for dipping.

Inspired by traditional teahouses and Chinese temples, Hong Kong microbrewery Moonzen’s first taproom pays homage to its Mong Kok location and is simply lovely to look at. Scarlet red and emerald green feature prominently in the 300-sq.-ft. space, which is cosy but comfortable with counter seating, booths, and a long communal table. Despite its diminutive size, Moonkok serves 12 beers on tap, nine of which are Moonzen’s, while the other three are guest taps. Bottles from Moonzen and German brewery Schenider Weiss are also available.

Baos and buns stuffed with sweet and sour pork or beef with black pepper sauce form the bulk of the menu. Alternatively, there are western snacks like loaded nachos, cheesy potato skins and sweet potato fries. There’s even a selection of pickled meats and vegetables if you prefer some funky fermentation to go with your brew.

Billing itself as “the largest taphouse in Hong Kong,” this Tin Hau destination boasts an impressive 40 craft beers on tap from the likes of Black Kite Brewery, Mak’s Beer, and Gweilo as well as breweries located outside of Hong Kong. New arrivals on the beet list keep regulars coming back to this atmospheric spot without a hint of pretension.

The food is far from fancy — think chicken wings, pizzas, fries, burgers and quesadillas — but that doesn’t mean it’s not satisfying. A variety of salads, pastas and sandwiches is also available, but if you’re with a group, let loose and pig out with the massive snack platter, featuring chicken tenders, fried shrimp, potato skins and other guilty pleasures.

Does beer taste better when you have a view of the sea? Find out at this airy, 4,000-sq.-ft. restaurant on the waterfront in Sai Kung that seems to always draw a crowd. At any given time, you’ll find around a dozen beers available on tap, with a nice mix of styles and local producers represented. (There’s also a dozen Oregon-made ciders and hard seltzers on tap.)

The tasty food reflects a wide variety of influences and is designed to please diners’ diverse tastes. Seafood lovers will delight in prawn cocktail, steamed New Zealand mussels, crab cakes and lobster rolls, while jalapeño poppers, onion rings and mozzarella sticks will appeal to those looking for traditional bar snacks. Tasty veggie and vegan options are available for those who’d rather avoid the burgers, steaks and fried chicken.

Look for the logo of a mustachioed hop wearing a top hat and smoking a pipe, and you’ll know you’ve found the right place. With 20 craft beers and ciders on draft, there’s plenty of choice; look to the screens above the taps or consult with the passionate staff for guidance. While it’s easy to find beers from Hong Kong, Britain, Belgium, Germany and America around town, Madhouse has a rather unique selection that often includes brews from Norway, the Netherlands, New Zealand and other countries that don’t always pop up on tap lists.

There are plenty of fried goodies to gobble up with glasses of beer, including fried shrimp wontons with crab roe dipping sauce, ‘evil Spam fries’ with a spicy mayo and deep-fried Japanese oysters. Alternatively, choose from a selection of tender braised meats like beef tendon or pig feet, or opt for slow-cooked grain-fed pork loin and Angus beef short ribs, cooked to perfection over 72 hours.

Beer The Roundhouse Taproom 65 Peel Second Draft Little Creatures alvy's Blue Supreme Moonkok momentai The Globe Hong Kong Island Taphouse The Madhouse Taproom
Michael Alan Connelly
Contributing Editor
Formerly the Editor-in-Chief of Lifestyle Asia, Michael is a lifestyle journalist who has written about food, travel, culture, and all the other things that make life worth living for more than a decade. A Chicago native who's also called New York, Hong Kong and Beijing home, his passions include cooking, hiking, dogs, and anything related to Italy.
Dining Travel Culture

Everything you need to know about The Glenrothes’ oldest release: a 50-year-old whisky coming to charity auction this month

10 ways to celebrate Halloween in Hong Kong this year