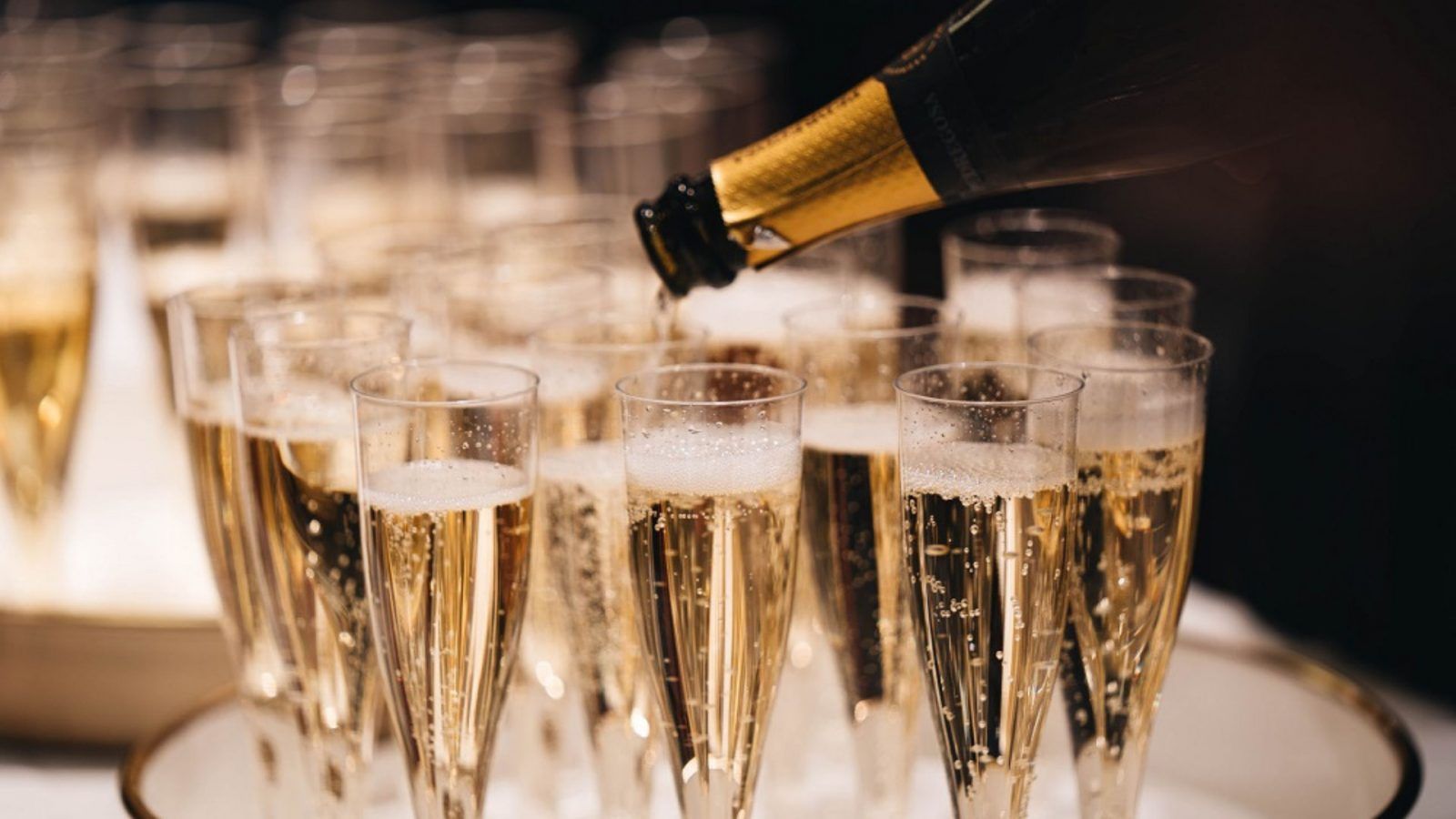 Champagne, explained: A snobbery-free guide to the best of bubbly

If Champagne as a category is intimidating to you, you’re certainly not alone. In fact, you’re actually in luck — Nicolas Rainon, winemaker at family-owned producer Champagne Henriet-Bazin, says that champagne is easier to share with novices, because “most of the time, they don’t have bias.”

“Champagne is my soul, simply because it’s just the rhythm of my life, [like] the beats of my heart. I see nature and every single day through Champagne — the seasons are drawn by the vines and the wine,” Rainon explains. “The weather is interpreted according to its impact on my estate. I work the soil, take care of the vines, respect nature, harvest, do the winemaking, and sell my bottles, so I really have to say that it’s simply all my life.”

With wisdom from Rainon, who co-owns and produces wines alongside his wife Marie-Noëlle Rainon-Henriet (Champagne Henriet-Bazin’s fifth generation), and the Champagne Bureau‘s US branch, here’s everything you need to know about Champagne and how it’s made.

Champagne is a sparkling wine that bears the name of the region it comes from. More specifically, in order to bear the name on its label, a Champagne must be made according to a long, strictly regulated list of requirements that govern every step of the production process from grape to glass. This covers details like the permitted grape varieties, which we’ll get into a bit later on, along with pruning, grape yields, the winemaking method (the Méthode Champenoise, or Traditional Method), minimum alcohol levels, a minimum storage period (15 months) prior to release, and more.

How is Champagne made?

Let’s dive deeper into the Méthode Champenoise — the process by which Champagne has been made for centuries and a major factor that sets the region and category aside from other sparkling wines like Prosecco, which undergoes a very different dual-fermentation process inside a pressurised tank. In both scenarios, the first fermentation is the creation of the still, dry base wine, and the secondary fermentation is sparked by the introduction of a mixture of yeast and sugar, referred to in France as the “liqueur de tirage.”

Rainon elaborates: “In Champagne, you leave it to nature to create the process of the effervescence during the second fermentation, which happens inside the bottle — the natural carbonic gas that results from fermentation cannot escape because the bottle is sealed, so it will naturally mesh with the wine and make it sparkling. When you let nature work, it’s always better!”

According to the Champagne Bureau (Comité Champagne), there are approximately 16,000 grape growers, 4,300 producers, and 370 houses, or businesses that produce Champagne using grapes from various growers, in the region. Producers and houses are respectively denoted by two main French terms: Récoltant-Manipulant and Négociant-Manipulant. A Récoltant-Manipulant, independently makes his or her wines onsite under his or her own label using grapes grown on the house’s vineyards exclusively (Rainon and his wife fall under this definition). Wines from these producers are colloquially referred to as “grower Champagnes” and make up a very small portion of the international market.

A Négociant-Manipulant  — such as Veuve Clicquot, Moët Chandon, and other big, well-known brand names — is defined by the US Champagne Bureau as “a person or legal entity that buys grapes, grape must, or wine to make Champagne on their own premises and market it under their own label.” Because these Champagnes make up the majority of the market in general, if you’ve only tried a few different labels, it’s most likely that they belonged to the NM category. These producers are also known as “grandes marques,” or simply “big brands.”

Pro tip: if you’re unsure about which category a bottle falls under, simply look for the letters “RM or NM” on the label.

What grapes are used to make Champagne?

Put simply, while there are seven grape varieties that are allowed to be used in Champagne, just three main grapes make up the bulk of these wines as we know them. “Pinot Noir, Chardonnay, and Meunier are the most commonly used, and at Champagne Henriet-Bazin we are lucky to have those varieties,” Rainon explains.”As organic farmers, our goal is to harvest grapes that carry the taste of the soil they are coming from — this means that our flavour profiles will depend on the grape variety, but also the soil, subsoil, gradient, and all the terroir elements of the vines involved in the blend.”

In the Champagne region, which is located in northeastern France (about an hour and a half from Paris by car), the subsoil (or the layer below the topsoil) is mostly limestone with sedimentary rock outcrops of limestone, chalk, and marl, depending on a vineyard’s location within the region. This soil composition not only serves as an effective drainage system for the vines but also yields a unique minerality in the finished product that differentiates Champagne from its sparkling peers, among many other qualities.

Champagne is also known for its dual oceanic-continental climate and steep slopes that offer great sun exposure during the day. Every vineyard plot, per the Champagne Bureau, has its own unique profile as a result of the terroir’s varying environments.

What areas make up the Champagne region?

Geographically, the Champagne region is divided into three subregions (Grand Est, Hauts-de-France, and Île-de-France), which are further divided into five departments (Aube, Aisne, Haute-Marne, Marne, and Seine-et-Marne). Within those, there are four main growing areas: the Montagne de Reims, the Côte des Blancs et the Côte de Sézanne, the Vallée de la Marne, and the Côte des Bar, and finally, those four areas contain 319 villages, or crus (yeah, it’s a lot). You might also recognize Reims and Épernay, which are two of the main cities in Champagne.

What’s the difference between Champagne styles?

Don’t be afraid of the word “sugar” when it comes to Champagnes and other sparkling wines — it’s totally normal and accepted practice to add dosage, or a specific amount of sugar that’s incorporated into a sparkling wine prior to its final corking. We can look at the sweetness levels of Champagne as a scale, with dosage measured in grams per litre:

Champagnes on the driest (least sweet) end of the spectrum are extremely popular within the wine community right now, and relative to the last few hundred years, the average wine drinker’s palate skews somewhat dry. Sweeter Champagnes were very popular in the 18th and 19th centuries, but dosage has been dialled down over the years based on demand. However, don’t knock the sweet ones until you try them — a sweeter Champagne can be really fun when paired with desserts.

You’ll also notice that in general, some Champagne bear a year on the label while others do not. When a certain year is specified, this denotes that the wine was produced using grapes exclusively from one harvest, thus representing one single vintage. Non-vintage (or NV) Champagnes are made using grapes from multiple harvests. The latter category makes up the majority of the market while vintage Champagnes are produced more rarely, as they rely on both exceptional growing conditions during their respective years and must spend three years maturing in the bottle (the minimum for non-vintage Champagnes is 15 months).

Another distinguishing factor when it comes to its production is a grape’s colour — i.e. black (or red) and white — as well as that of the finished product (Champagnes will either be a white or rosé wine). You’ll often run into terms like Blanc de Blancs, which translates to “white of whites,” or white wine made only from white grapes, which in Champagne is mostly Chardonnay; there’s also Blanc de Noirs (a white wine made exclusively from black grapes), which are largely made using Pinot Noir and Meunier grapes in Champagne. Bottles that do not specify either of these terms are generally a blend of both black and white grapes.

We’ve perhaps saved the best question for last: what does Champagne taste like? Well, it depends on the grapes used (which must be some combination of the seven permitted grapes mentioned above), as well as their terroir and the winemaker’s touch, but Champagnes are generally known for their bright acidity and light, lively body, often with a brioche-y and/or nutty quality thanks to required minimum ageing on the lees, or dead yeast cells. In Champagnes, you’ll find a wide variety of fruity, floral, and spice notes on the nose and palate, but it’s impossible to contain these wines in a singular box. Like Rainon says, in order to truly experience Champagne, you’ve just got to drink it.

(Credit for the hero and featured image: Alexander Naglestad/Unsplash)

Champagne Sparkling Wine What is Champagne

Champagne in space: It’s going to get bubbly on board with this elixir