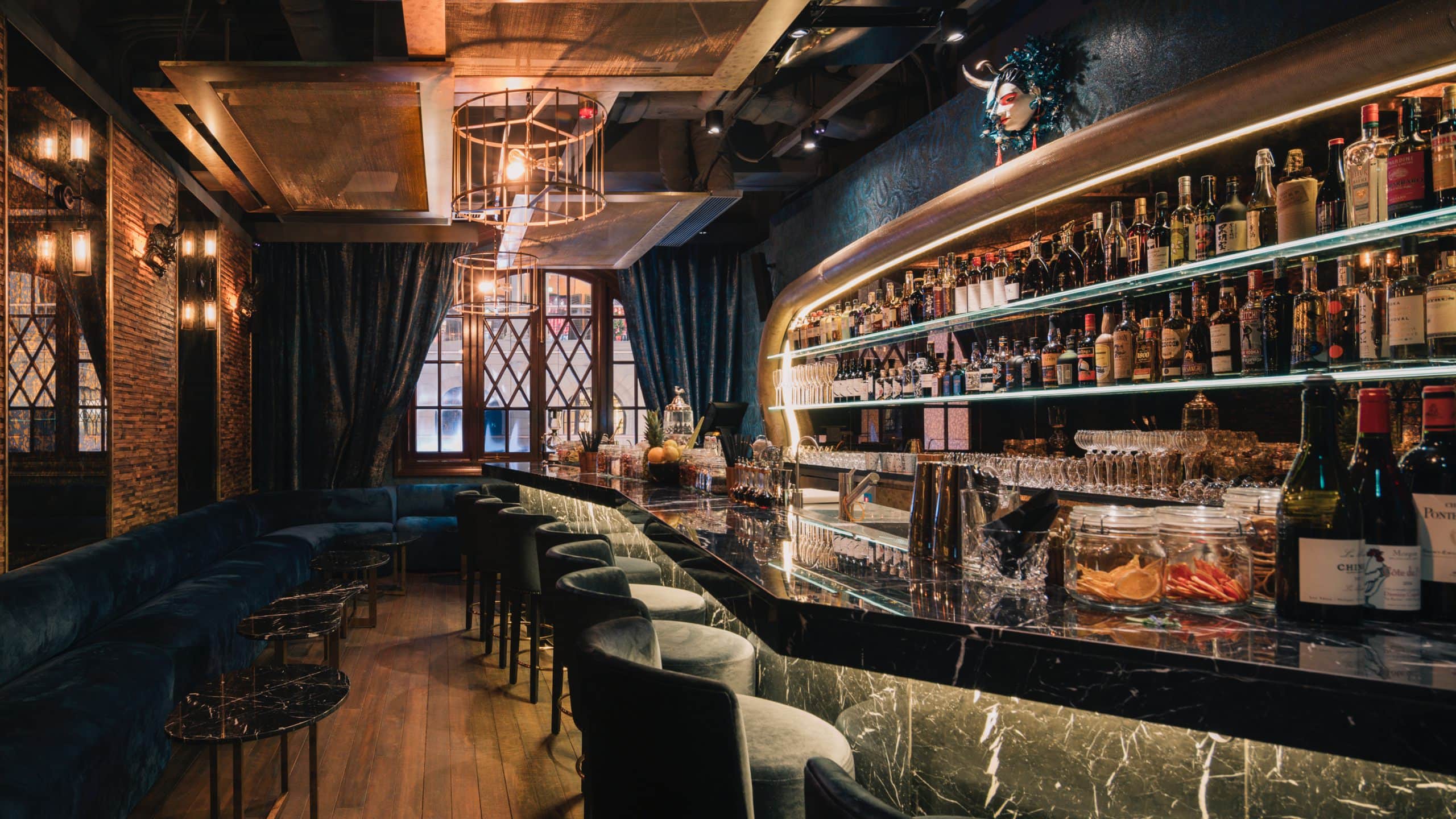 Where to drink in Hong Kong in September 2019

Rum, tea cocktails, eclectic whisky, rare wines and even gold-leaf sake — here are all the best drinks to quench your thirst in Hong Kong this month.

This September kicks off to a ‘rumming’ start, literally, with Hong Kong Rum Week. From 2–8 September, pick up a rum passport to collect stamps by exploring some of the best rum cocktails around town at participating bars, and sit in on masterclasses to learn more about the intricacies of the sugarcane spirit. You’ll want to start at Honi Honi Tiki Lounge with its library of over 230 rums, and check out the in-house concoctions, not to mention its very first Hong Kong rum. Definitely don’t miss the guest bartending shifts, including cocktail maestros from Kuala Lumpur’s Jungle Bird, Manila’s Buccaneers Rum & Cocktails, Singapore’s Neon Pigeon, and Don’Q Global Brand Ambassador Alexx Mouzouris. Participating bars of Hong Kong Rum Week include Employees Only, Gishiki Lounge, Piqniq, Potato Head, The Pawn, The Sea by The Old Man, Wise King and more. Events are free to enter, and cocktails start from HK$80 each.

H Code is where it’s at these days, and if you’re in the intrepid mood to try a few experimental cocktails, you’ll want to head to the latest hot opening, Tell Camellia. Opened by Gagan Gurung and Sandeep Hathiramani, Tell Camellia is tucked in a secret alleyway within the F&B complex, so finding it is part of the fun. As you may be able to tell by the name, the MO here is tea and floral cocktails, traversing through geographical regions in which the camellia plant thrives, and at the same time, exploring the world’s vibrant tea cultures. Gagan Gurung’s creativity strikes again with cocktails playfully named after countries: The Australia, for instance, pairs Yalangi Rain Tea from Queensland, with intriguing ingredients such as chocolate Tim Tams, clarified strawberry, blue cheese, whiskey and a garnish of koala munches. Learn more at our first look here.

If you can’t manage to snag a good seat at the snug drinking den Whisky & Words, head somewhere that’ll bring the bar to you: the newly opened Kakure, for instance. The Prince’s Building lounge and restaurant hosts a regular Kanpai Series of guest bartender shifts, this time inviting head mixologist Rajput Deven from Whisky & Words to shake up a few exclusive concoctions, including one that pairs Black Label sherry cask whisky with dry figs. Kakure’s bar manager Sharad Chhetri will also be making off-menu libations all night, including the new Copper Dog Whisky cocktail.

Head over to Lobster Bar at the Island Shangri-La to check out its latest cocktail menu, this time influenced by the 1933 James Hilton novel, ‘Lost Horizon’. The book is based off a fictional utopia high up in the clouds above Tibet, known to be credited as the origin of Shangri-La. Sip from four new cocktail categories inspired by such fantastical journeys detailed in the tome — British Influence, Chinese Heritage, Heaven On Earth and Oriental Tales. You’ll want to head over from Monday to Saturday evenings to catch the live jazz.

Sake lovers definitely want to mark this on their calendar, as Hong Kong’s largest sake event is just around the corner. Hosted at the gorgeous central courtyard of House 1881 heritage hotel, the event will feature over 80 different sakes from 14 breweries across Japan. There will also be a masterclass where you get to learn and discern the flavour profiles of four different sakes. It’s the perfect opportunity to discover your favourite new sakes and bring them home at great prices.

One of the hottest new tables in town for Japanese omakase menus is none other than one Michelin-starred Sushi Zo — whether or not you’re sitting in for chef Fumio’s 18-dish experience, adjoining bar Gishiki Lounge is a must-visit for a creative tipple. ‘Gishiki’ in Japanese means ‘ritual’ and hence ceremonious influences abound, with references to Noh theatre, mythology, and plenty of showmanship — think live siphon brewed spirits and exquisite sakes, the latter featuring the exclusive Gishiki label gold leaf sake.

Hong Kong’s oenophiles will have another haunt to look forward to soon. Opening in the second half of September in SoHo is ThinkWine, Hong Kong’s first sommelier-led experiential wine bar. At the helm are two French sommeliers: Romain Loriot, former Group Sommelier at Le Comptoir restaurants; and Jean-Benoit Issele, former Head Sommelier at Black Sheep Restaurants’ Belon, which shot to stardom with a coveted Michelin star and top 15th ranking on Asia’s 50 Best Restaurants this year. Expect over 600 varietals showcasing diverse terroirs, appellations and vintages, and of course, expert food pairings to go with them.

It’s not enough that HeyTea is steadily conquering the bubble tea scene in Hong Kong, it’s creeping into cocktail territory too with its latest branch at K11 Musea — HeyTea Lab. With 4,000 sq.ft. of space, HeyTea Lab has managed to snag a gorgeous harbourview location with plenty of seating for customers to enjoy their most famous Cheezo and fruit teas. Building on their signature teas, HeyTea Lab in particular is serving up six new tea-based alcoholic drinks: Four are inspired by the seasons (HK$56–99), while two are Hong Kong-exclusives, named Leslie (HK$96) and Maggie (HK$78) — presumably after the late superstar Leslie Cheung and screen goddess Maggie Cheung. We’re particularly excited for the Summer cocktail, a quenching drink made with French green apples, umeshu and sijichun tea, topping off with shaved ice and pearls.

Looking for something to quell the blues before the end of a long week? Eaton HK’s terrace bar Terrible Baby has teamed up with Ear Up and singer-songwriter Serrini to bring an eclectic selection of local talent at its newest live music night. Sip on some of Edgar Santillo’s signature cocktails while tapping your feet to intimate sets of jazz and blues, pop rock to comedic hip hop. Therapy Thursdays take place on an irregular schedule — check out the next dates here.

An opulent perfume shop doesn’t seem like a place for cocktail hour, yet, here we are: Swinging its doors open several weeks ago, French perfume house Goutal’s new flagship is located in the heart of Causeway Bay with a store designed by award-winning design studio Via. You’re essentially stepping into founder Annick Goutal’s dressing room to discover your favourite scents. Head to the hidden Sensory Lounge however, and you’ll be able to learn to nose fine wines just as you do with a fragrance, with fragrance and wine pairing workshops led by the in-house French perfumer and sommelier.

Kakure Where to Drink in Hong Kong Hong Kong Rum Week Tell Camellia Whisky & Words Gishiki Lounge
Evelyn Lok
Managing Editor
When not trying out the latest beauty and wellness trends, Evelyn is likely enjoying a perfectly balanced negroni or exploring some of Hong Kong's best new places to eat and drink. At Lifestyle Asia she covers everything from the biggest events in town to interviews with Hong Kong specialists, with topics spanning art, food and drink, health, tech, and travel.
Beauty Wellness Events Art Drinks

Q&A: Blue Bottle’s Michael Phillips on how to brew the perfect cup of coffee at home

Move over caviar, the food that goes best with Champagne is radish