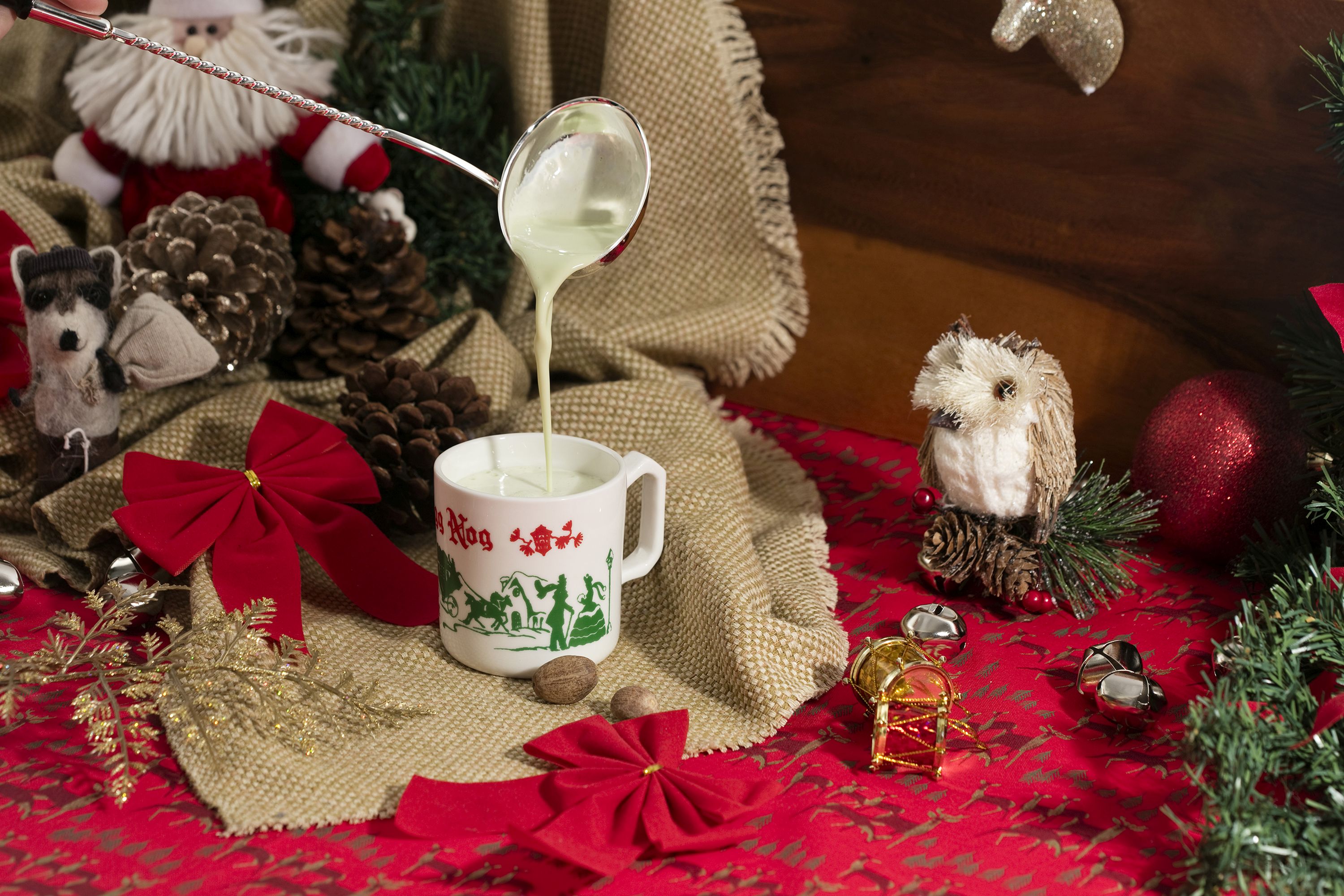 Where to drink in Hong Kong this December

Whether you’re busting out the champagne for party toasts, already on peak mulled wine mode, or happy to be swigging your first ‘nog of the season, it’s undisputed that this is the most wonderful time of the year to have a drink, spurred along by delicious new drinks menus, bar openings, and fun bartender collaborations. Here are nine different places to get merrily buzzed this December — we’ll cheers to that. 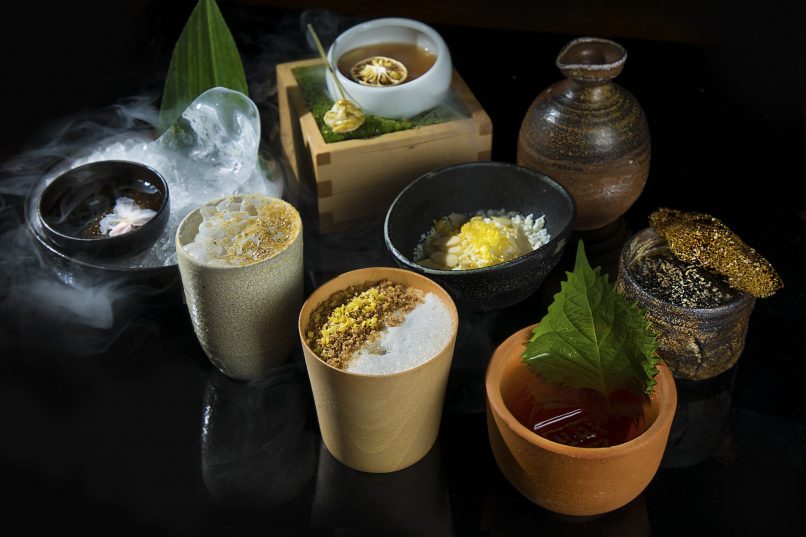 Inspired by the seven codes of samurai honour, bushido, as well as the stories behind seven legendary samurai warriors throughout history, this new cocktail menu experiments with seven classic drinks in Zuma’s signature Japanese fusion twist. They’re also served in unique ceramic-ware newly sourced from potters in Japan, with vessels carefully picked to match and complement the flavours and narrative of each cocktail.

Zuma’s master mixologist Arkadiusz Rybak likely had a blast experimenting with unlikely cocktail ingredients throughout the new menu, including things such as nitrogen-frozen white chocolate powder, crystallised tonka bean and umeshu, truffle egg white, Hokkaido soft cheese, and cookie crumbs — and all with surprisingly pleasant results. One drink that we suspect will be a popular order is the Honda Negroni — named after samurai Honda Tadakatsu. Made with Tanqueray gin, umeshu, campari, mancino rosso, shiso and ‘clay,’ it’s an herbaceous, sweeter and lighter version of a classic negroni, but still with quite some kick. It’s beautifully balanced out by the odd but apt introduction of ‘clay’, thanks to the usage of a raw clay cocktail tumbler, which helps add a touch of dryness to each sip. 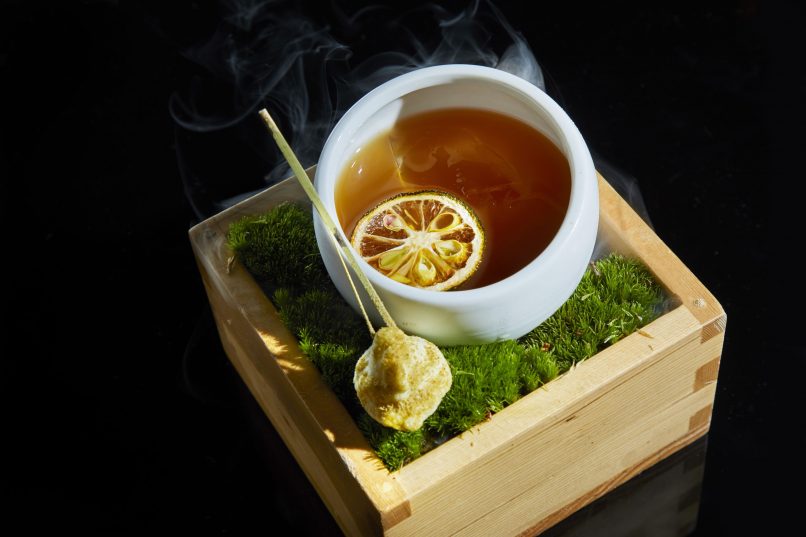 We absolutely loved the Takeda Margarita, a moreish, juicy margarita made with Don Julio Blanco tequila and — interestingly enough — burned Japanese eggplant; as well as yuzu sake, yuzu juice and yuzu kosho seasoning. Normally a quite polarising ingredient, the slightly smoky, charred sweetness of the eggplant, which we guess was pureéd into the cocktail, made the drink utterly addictive. Much like its namesake, Takeda Shingen, a Sengoku-era hero who defeated conquering forces against overwhelming odds, you’ll want this cocktail to save you again and again all night.

Taking on Christmas cheer with full gusto this year is Lily & Bloom, which has been transformed into a wintry wonderland following the ‘Miracle Pop-Up Bar’ tradition. The pop-up bar was first started in 2014 by New York City cocktail bar Mace (one of World’s 50 Best in 2015), which turned into a holiday-themed establishment, Miracle, for the festive season. This year, Miracle is popping up at 50 locations all across the globe, with Lily & Bloom being the first bar in Asia to bring on the cheesy unabashed love for Christmas, lasting through to the end of the month.

For the Miracle Pop-Up Bar, each room at L&B will pay homage to Christmas décor from different eras, from snowy winter to kitschy 70s holiday season. The drinks (HK$120 each) will be served in unique seasonally themed mugs and glassware, which will give a kick for the ‘gram, but of course, it’s what’s inside that counts. Perfect for the holidays, the Christmopolitan shakes up vodka, elderflower, dry vermouth, spiced cranberry sauce, rosemary, lime and absinthe mist. You’ll get a comforting winter warmer out of the Run Run Rudolph: Blanco tequila, coffee liqueur, iced hot chocolate and Mexican spices. Finally, the Bad Santa is the answer to all mulled wine addicts: mulled red wine, tawny port, orange liqueur, spices and golden raisins. Shot versions of the drinks are also available at HK$70 each. 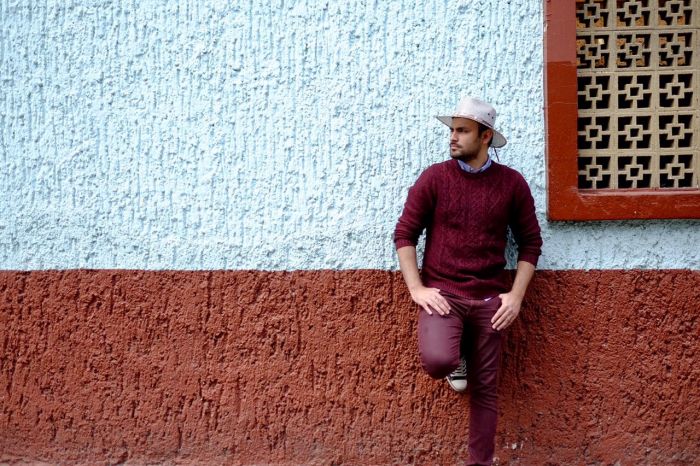 Agave spirits have been simmering around in the Hong Kong drinking trends for the past few years (and of course, rolling off the tips of tongues of hipsters for even longer), but it seems like agave is finally about to get its big moment with the opening of COA, Hong Kong’s first artisanal Mexican cocktail bar. Now in its soft-opening stage, the bar is headed up by the impressively decorated industry veteran Jay Khan (previously of Lily & Bloom, Foxglove and Dr. Fern’s), and takes over what used to be NEO Cocktail Club located on the cusp between SoHo and Sheung Wan. We’re loving the sound of the Tepache, a humble, fermented drink usually made with pineapple skin and cinnamon. If there’s any indication of how legit it’s going to be, even the bar itself is named after the machete-like tool used to harvest agave. We expect plenty of care to be taken in maintaining the authentic quality of the drinks while helping to educate people on the provenance and culture of Mexican spirits. 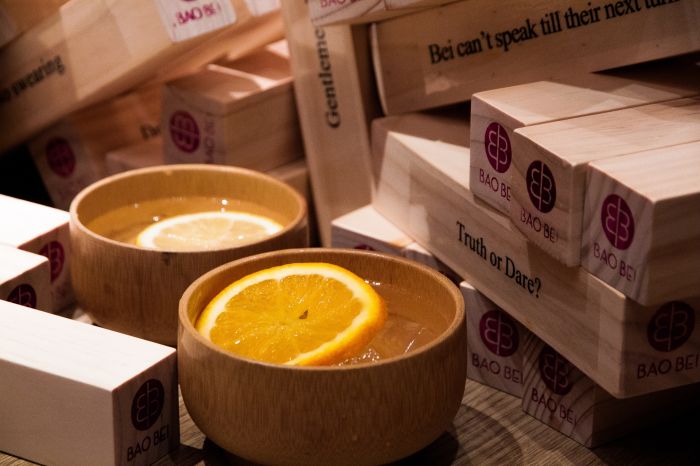 With the popularity of dice games, beer pong and other divertissements Hongkongers love to have while drinking, there’s finally a spot in Central for you to get your game on. Every Wednesday from 9pm until late, Bao Bei will be the place to be if you fancy a game of jumbo table Jenga — with fun drinking dares on each tile you successfully pull out. For traditionalists, there’ll also be stack cup, beer pong, flip cup, dice and card games. With Bao Bei’s playful fusion cocktails that incorporate fun Hong Kong flavours and presentations, it’ll be the perfect setting for after-work drinks and date nights alike.

Flip cup and beer pong from HK$228 for a jug of beer or mixed spirits. 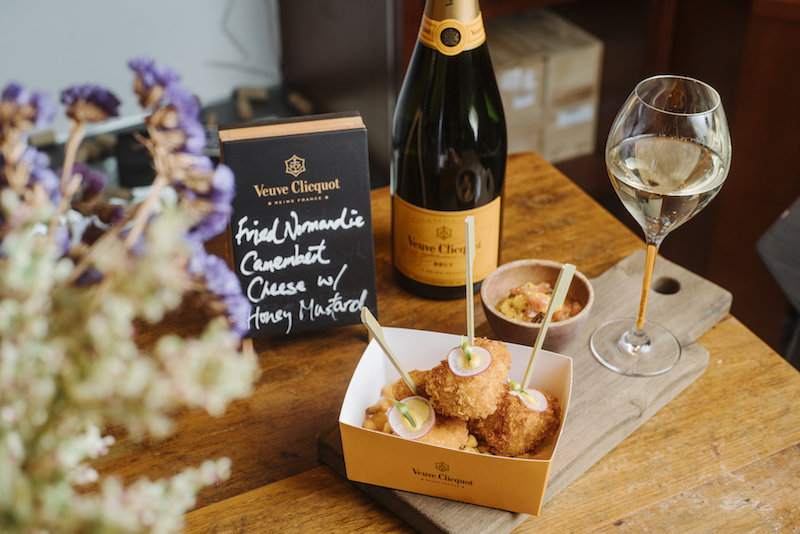 Not that we need any time-sensitive excuse, but the festive holiday months are arguably the best time for devouring cheese and decadent cheesy dishes. With Veuve Clicquot’s fourth round of its Yellow Hour happy hour programmes, you can pair delicious Champagne with some of the city’s cheesiest bites at 12 participating bars across the city. Available through to 31 December, each restaurant will be offering their best cheese dish paired with a glass of Veuve Yellow Label. See the full list of outlets and their comfort snacks below: 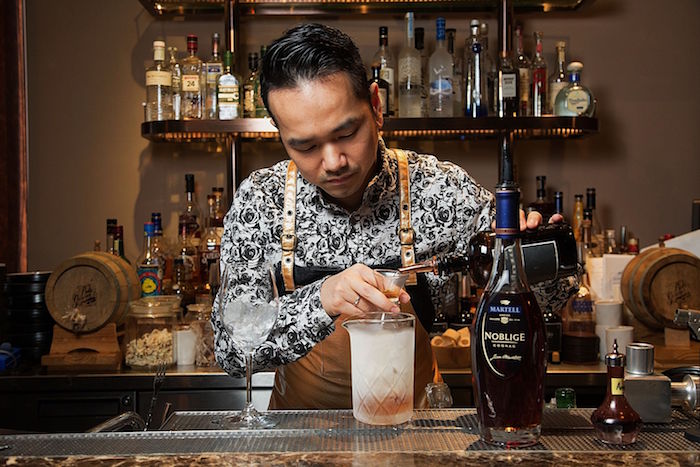 You’ll find the perfect storm of creativity, cocktails and cognac at the Grand Hyatt this month. Working with Martell, contemporary ink artist and brand ambassador Chloe Ho has created new work inspired by the brand, a piece titled ‘Bird of Happiness’ which is to be exhibited at her solo exhibition at Ink Asia 2017 on 14-17 December. To add to the collaboration, award-winning mixologist Antonio Lai has also been enlisted to invent a cocktail based on the colours and vibrancy of Ho’s work.

Starring Martell Noblige cognac, the ‘Big Bang’ cocktail adds a touch of sophisticated spiciness using a pink peppercorn tincture, then topping it up with vanilla smoke. It’s then topped with a coaster printed with Chloe Ho’s ‘Big Bang’ painting. Sip this along with the ‘Ascendence’ cake, designed by Executive Pastry Chef James Holehouse after Ho’s art, which is available at Tiffin as well as the Chocolatier. Made with Martell Noblige cognac, espresso and 72% dark chocolate, the rich torte perfectly matches the intensity of Ho’s works. Taste both cocktail and cake at Tiffin for just HK$140, or purchase the full cake (1lb) at Chocolatier for HK$388. You’ll also be able to sip the Big Bang Cocktail on its own at VEA (29 & 30/F, 198 Wellington Street, Central) for HK$140. In between the British feasting, pub-quizzing, movie-watching and merry-making at The Best of British festival this month, there’s not just one but two sessions for you to dip into unlimited drams. Mark your calendars for 16-17 December, 12–5pm or 5:30–11pm (or purchase the VIP tickets for all-day access) for The Great British Whisky Experience, a new feature this year at the festival. A ticket gets you access to private tasting sessions, talks, masterclasses, and the chance to sample unlimited standard drams as well as sip whisky cocktails created with Scotch. A number of intriguing workshops are on offer, including a session by Scotland’s The Lost Distillery Company, which revisits historic shuttered distilleries and Scotch whisky legends of lore. There’s also tasting classes from The Glenlivet, Aberlour single malt whisky, the Teeling Whiskey Company, craft distillery Glendalough, and also from independent bottlers.

And lest perchance you’re not a fan of whisky? The Gin Garden will welcome one and all — choose from 15 different gin concoctions, featuring none other than Fever Tree tonic. 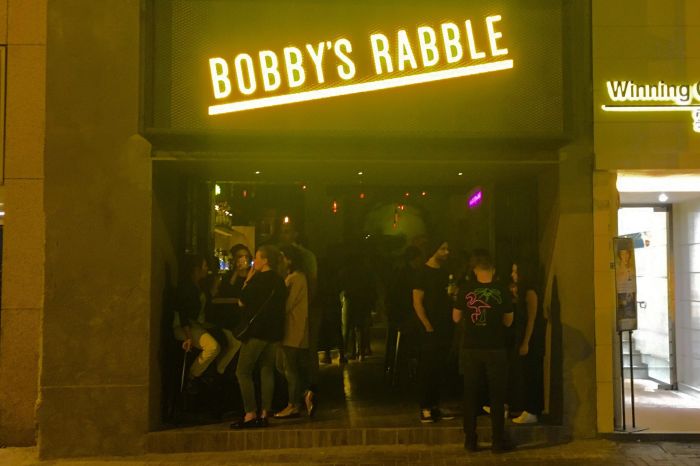 Two years ago, neighbourhood bar Bobby’s Rabble opened up on Peel Street and swiftly became a fixture of the nightly convivial street party atmosphere, with patrons spilling onto the streets with drinks in hand. It’s named fondly after former British PM Sir Robert Peel (whom evidently Peel Street is named after); and ‘Rabble’ refers to the 40-some investors who jointly own the space as well as the circle of regulars who visit the bar. Bobby’s Rabble is a dimly lit, no-frills neighbourhood local popular with the after-work crowd (especially with its HK$50 Happy Hour every day from 5-8pm).

For past visitors who might have hoped for a little more legroom at the modest Peel Street bar, you’ve just gotten your wish: Just this month, the bar has officially opened its second outlet on Wyndham Street, with “big Bobby’s” taking over the old space left behind by German bar Bit Point — and bringing the house party vibe further uphill. Expect a decent selection of craft beers, whiskies, a willing bartender to make your favourite cocktail, and an eclectic playlist of hip hop, rock and mo-town. Newly launched in November, Nespresso’s new Exclusive Selection brings la creme de la creme of coffee experiences to fine dining restaurants across Hong Kong and Macau. Featuring two new, exceptional and rare beans — the Nepal Lamjung and the Kilimanjaro Peaberry from Tanzania — Nespresso has partnered with chef Vicky Cheng of VEA to create an exclusive coffee-inspired menu for the occasion. To pair, mixologist Antonio Lai has crafted two coffee-based cocktails that cleverly showcase the unique aromas and flavours of the two beans. The Himalayan Toast uses a syrup created from Nespresso Nepal Lamjung, incorporating it with amaretto, frangelico, lemon juice and egg white. Treasures of Tanzania adds a shot of Kilimanjaro Peaberry to passionfruit, coffee liqueur and vodka. At HK$120 each, it’s well worth it for any coffee geek to try both: especially for the chance to appreciate the intense, toasty character of the Lamjung against the fruitier profile of the Peaberry.

Whisky Grand Hyatt Hong Kong Veuve Clicquot Lily & Bloom Nespresso VEA Bao Bei where to drink hong kong Yellow Hours Where to Drink in Hong Kong Best of British Festival COA Bobby's Rabble
Evelyn Lok
Managing Editor
When not trying out the latest beauty and wellness trends, Evelyn is likely enjoying a perfectly balanced negroni or exploring some of Hong Kong's best new places to eat and drink. At Lifestyle Asia she covers everything from the biggest events in town to interviews with Hong Kong specialists, with topics spanning art, food and drink, health, tech, and travel.
Beauty Wellness Events Art Drinks
Sign up for our newsletters to have the latest stories delivered straight to your inbox every week.