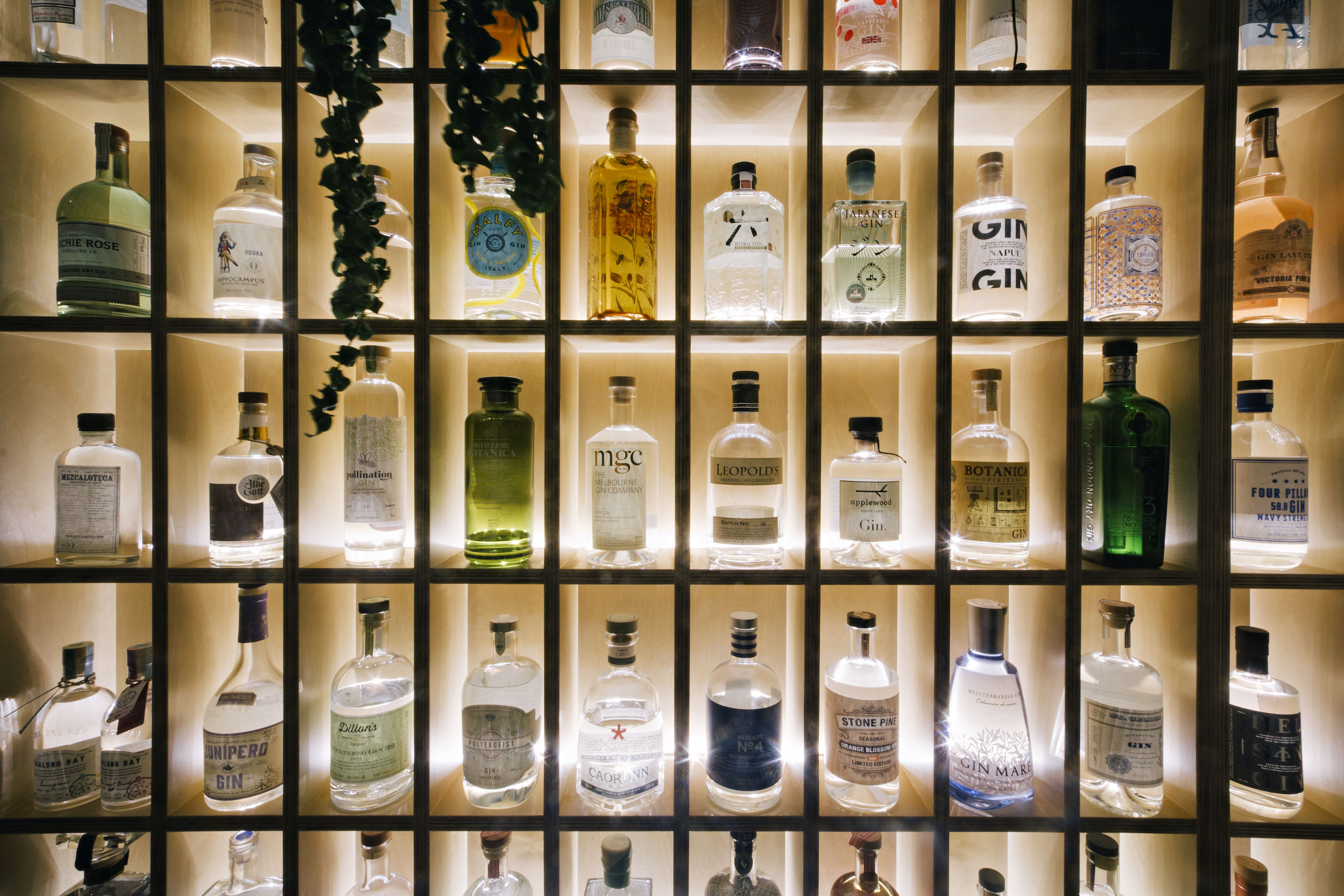 Where to drink in Hong Kong this September

One of Hong Kong’s many positive qualities is that you never have to look very hard to find a good drink. Not only do we have a wide array of watering holes, from dive bars to posh cocktail dens, but we also have, every month, new cocktail menus, pop-ups featuring world-class mixologists, and, of course, new bar openings. That’s the purpose of this monthly column: to keep track of everything for you. We’ll be focusing solely on new drinks and drinking spots here, but if you want a list of our favourite bars of the moment, look no further than our Hot 10. Without further adieu, here’s where you should be toasting and tippling this month. Arguably the biggest drinking highlight of the month is Death & Co.’s pop-up bar at Ozone. From 19–23 September, the team from the famed speakeasy will be slinging their signature cocktails at Asia’s highest bar, continuing a trend of New York City’s top bars making visits to Hong Kong. Ozone’s Spanish chef de cuisine, Rafael Gil, will be whipping up some small plates to pair with the cocktails, because no one wants to drink on an empty stomach. For reservations, call +852 2263 2270 or email restaurantreservation.hk@ritzcarlton.com.

‘The Spirit of Summer’ Afternoon Tea

If you’re looking to take your afternoon tea ritual to the next level, why not add some Absolut vodka into the mix? Now through 30 September at Conrad Hong Kong’s lobby lounge, guests can enjoy a delectable selection of sweet and savoury treats, tea and one specially created Absolut cocktail (HK$298 for one, HK4498 for two). Absolut’s flavours of Vanilla, Mandarin, Citron, Kurant, Apeach, and Pear are used in the cocktails and also, creatively, in the tea set’s desserts, such as macarons and eclairs. From its humble origins at Western Market in 2012, Beertopia has grown into a massive festival for craft beer lovers. Last year, the fest drew a crowd of over 14,000 guests and served more than 500 beers from around the world; this year’s two-day fest (22–23 September) only promises to be bigger and better. Tickets range from HK$290–$495, but beer lovers should be sure to book in advance, as it’s quite likely to sell out ahead of time.

Pon Tiki at The Pontiac One of our favourite watering holes, The Pontiac is looking to stir up some Sunday fun with its new Pon Tiki party. From 2–11pm every week, the bar will serve up tiki vibes with tropical cocktails, coastal grooves and “probably a generous amount of fire”. Get ready to kiss your Sunday blues goodbye with Beckaly Franks and her very fun crew. The Optimist may be one of Hong Kong’s best gin bars, but they know what to do with other spirits, too. Bar manager Sam Lebel has introduced a new range of creative cocktails that we can’t wait to try. Amongst the new selections are the Bee’s Knees (HK$110), a mix of Finlandia Vodka-infused chamomile, green Chartreuse, elderflower liqueur, lemon juice and vanilla syrup topped off with egg white; and Spicy Joe’s (HK$120, pictured above), a rich mix of Mount Gay rum-infused raspberry and coffee beans, finished with an intriguing mix of Chambord, chocolate absinthe liqueur and habanero bitters. 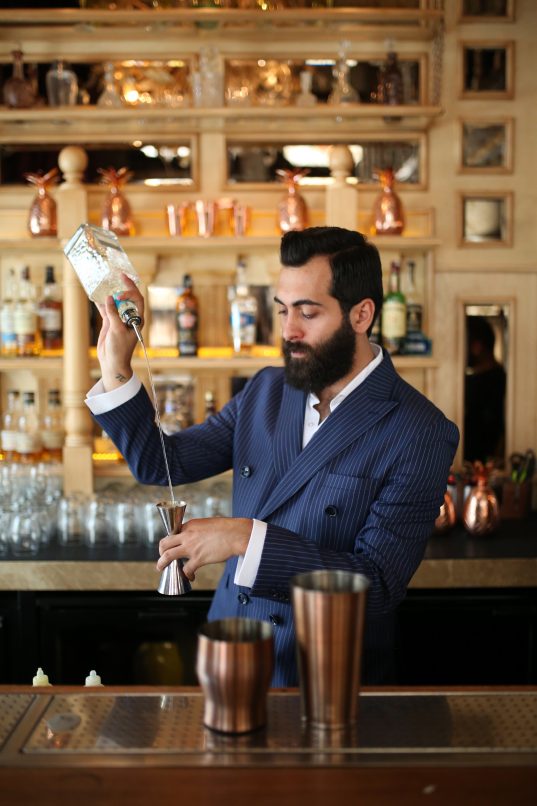 One of Hong Kong’s top tippling spots, Lobster Bar and Grill this month welcomes acclaimed mixologist Osman Fethi Baycan as a guest bartender, from 21–24 September. The 28-year-old from Istanbul has a knack for crafting innovative drinks,  and he’s gained international recognition at mixology competitions around the world. While he’s here, he’ll be mixing up a selection of five cocktails of his invention, each priced at HK$130, including the Clarified Milk Punch, made with more ingredients than we can count. 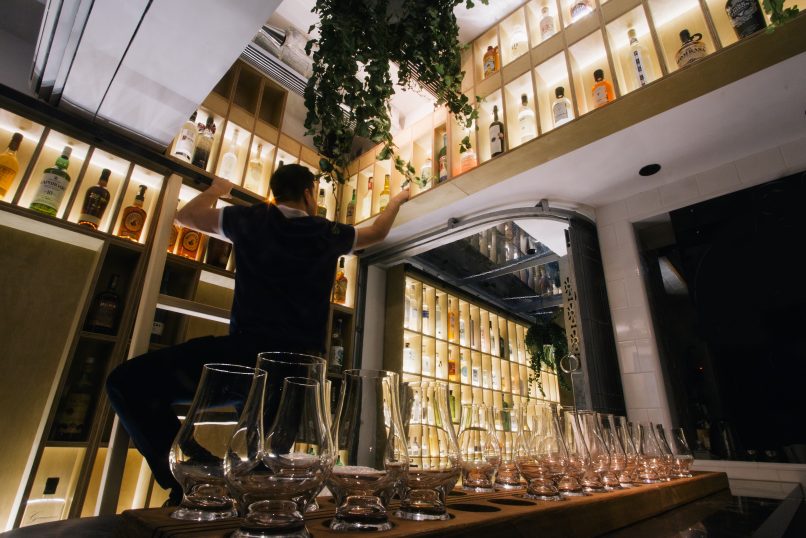 Hot on the heels of The Woods’ third anniversary party and following the opening of Kwoon earlier this year, Victoria Chow has launched The Woods’ Annex, an intimate tasting room in the heart of SoHo. Dedicated to artisanal spirits and designed for serious drinkers, this beautifully designed space has just eight seats and is available by appointment only (book here). Through tastings at The Woods’ Annex, Chow hopes to elevate spirits to the same level as wine and give consumer a similar type of education and appreciation. From 8–10 September, Chater Garden will play host to hong Kong’s first “spirits & shakers” festival. Featuring more than 20 exciting bars, including newcomers Fang Fang and Picada, the outdoor cocktail festival will serve up a mix of fine libations and live music over three days. We hope you have your go-to hangover cures ready for Monday morning. Tickets are HK$130 in advance, HK$180 at the door. Rescheduled to 9 September due to inclement weather, Whisky Live is a premier event for lovers of this brown spirit. VIP tickets may have sold out within hours, but normal tickets (HK$380) still give you the chance to mingle with master blenders, whisky makers and brand ambassadors — as well as sample from over 200 whiskies from around the world. In between the master classes and cocktail drinking, you can also sit in on a stand-up comedy show by Vivek Mahbubani, view some art, or take part in a charity whisky auction where proceeds go to Orbis Hong Kong.

Art in the Bar

As we all know, alcohol can open up the mind, and what better way to feed creativity than to admire some cutting edge art while you sip your favourite cocktails? For one night only, 11 bars across Hong Kong Island will play host to Art in the Bar, the first-ever art installation pop-up of its kind, hosted by art community platform CoBo Social. You’ll be able to see contemporary video works by over 13 different Asian artists, including the likes of Samson Young, Chen Tianzhuo and Tromarama. This acts as a precursor to CoBo Social’s upcoming launch of its Video Art Asia online initiative. Check in on Facebook at the unique place tags throughout the night for exclusive dining and drink offers at each of the participating venues — including Cobo House, Duddell’s, Koko, Salon 10, The Pawn and Potato Head.

See the full details at Art in the Bar

Drinks Hong Kong Cocktails Wine Drink Ozone Bar Bars Dining Absolut Cocktail Bars Cocktail Bar Beer Conrad Hong Kong Alcohol Craft Beer Victoria Chow beer festival The Pontiac The Optimist drinking Lobster Bar and Grill Hong Kong Bars Beertopia whisky live where to drink hong kong where to drink Where to Drink in Hong Kong Death & Co. Downtown Cocktails Art in the Bar Pon Tiki The Woods Annex
Michael Alan Connelly
Head of Digital Content
A Chicagoan by birth and a New Yorker by habit, Michael has more than a decade of experience in digital publishing at leading titles in the U.S. and Asia. When he's not checking out Hong Kong's newest restaurants and bars or jet setting around the globe, you'll find him hanging out with his dog Buster and enjoying an Aperol Spritz.
Travel Hotels Restaurants Cocktails Culture Italy Art Music Cheese
Sign up for our newsletters to have the latest stories delivered straight to your inbox every week.