Every year, cocktail enthusiasts eagerly look to Diageo’s World Class Bartender of the Year award. It’s an annual opportunity for thousands of bar maestros across the globe to celebrate their storied concoctions — and for one to take the ultimate gong.

Now in its 11th iteration, the World Class 2019 cocktail competition is sending global finalists to Glasgow for the deciding leg in September this year. World Class has previously hosted the festivities in cities such as London, New Delhi, Rio de Janeiro and Cape Town, and is now bringing the event to the home of distinguished spirits within the Diageo portfolio, including the iconic Scotch labels Johnnie Walker, Talisker, The Singleton and Mortlach.

On the road to Glasgow, the first round of the competition has already wrapped up in Hong Kong and Macau. For round one, each contestant had to create two unique cocktails based on the themes of “Citrus Heart” and “Understanding Smoke.” The former refers to the unique combination of citrus botanicals found in Tanqueray No. TEN, named the “citrus heart,” and the ensuing cocktail had to be a highball serve using the premium gin as a base.

The latter refers to the smokiness at the core of Johnnie Walker Black Label. Smoke has become a rather expected flavour in the cocktail world, but the challenge here is to use it in a controlled manner, so as not to dominate the overall flavour or aroma of the cocktail. Contestants had to use a pre-smoked ingredient that pairs and complements the smoke inherent in Johnnie Walker Black Label, and serve it in a cocktail of any style.

To the delight of Hong Kong’s countless cocktail connoisseurs, the region’s drink entries are all available for guests to try at the participating venues, for a limited time only. Scroll through below to find our top picks and learn more. 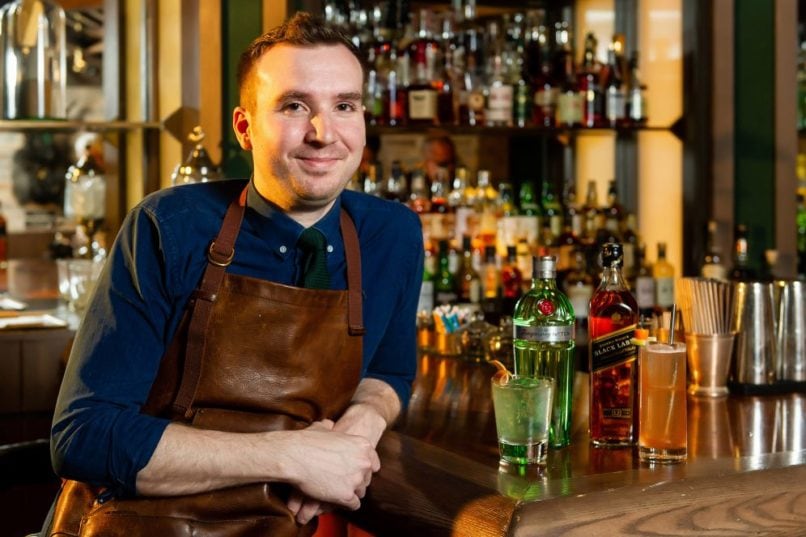 Adam Schmidt at PDT draws out the sweet and smoky undertones of Johnnie Walker Black with the intriguing use of smoked honey, but not before balancing it with a splash of Campari, and a touch of refreshing acidity with lemon juice and kumquat syrup. Schmidt’s Tanqueray No. TEN rendition also makes use of Asian ingredients — featuring calamansi shrub and lemongrass tea, paired with a sophisticated touch of Manzanilla sherry. 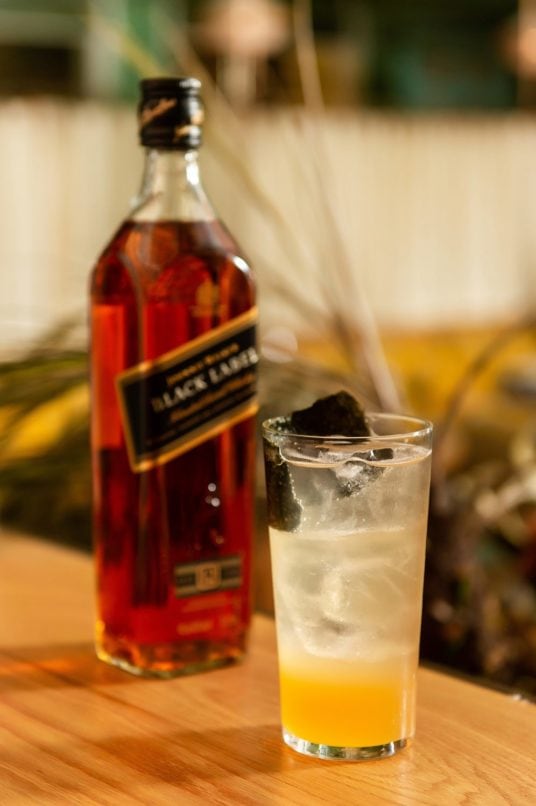 Dazzling interior design meets well-executed, exuberant Chinese cuisine at John Anthony, and the playfulness injected into the cocktails by Amir Javaid reflects this. The game Rock, Paper, Scissors is as accessible as a whisky highball, Javaid argues. But there’s nothing simple about this cocktail, of which Javaid has gone to extreme lengths to accentuate the flavours of the whisky, with intent to bring new and old whisky lovers back to Johnnie Walker. The drink features a clarified pear cordial made in-house, paired with Ketel One vodka (used for its black pepper and citrus notes) — which in turn has been infused and distilled with burnt paper. This was done to mimic the smoky edge of barrel ageing. Finally, the highball is topped off with a few dashes of a homemade spiced almond bitter, paying homage to the ancient spice routes that inform much of John Anthony’s cuisine. 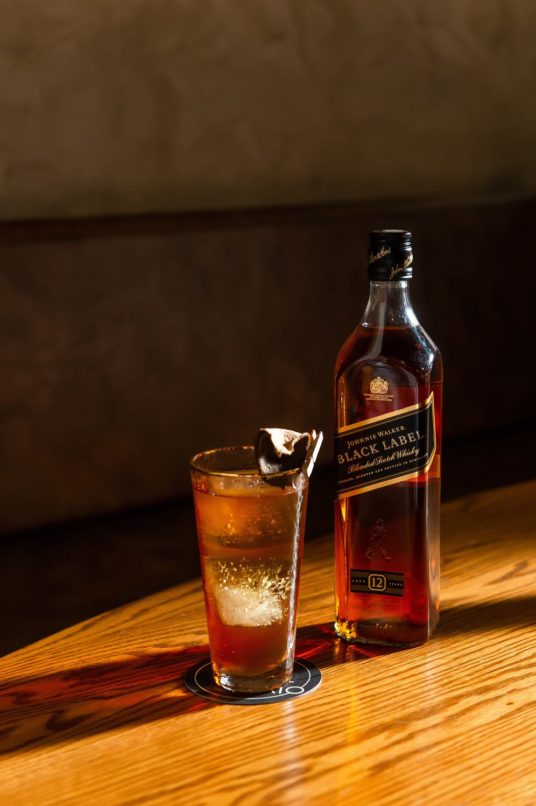 The two cocktail entries at Tsim Sha Tsui’s HaTo Bar take inspiration from a historic love story dating back to the Western Han Dynasty. Sima Xiangru was a talented but poor scholar, who famously eloped with Zhuo Wenjun, a poet who belonged to an affluent family. For Zhuo Wenjun, bartender Jack Leung highlights Tanqueray No. TEN in an elegant spring cocktail using chrysanthemum-infused vermouth. Further reflecting the bittersweet love story of the couple, the Sima Xiangru infuses Black Label with sweet dried plum, pairs it with Monkey Picked tieguanyin tea, and tangerine syrup — all before a final garnish of smoked tangerine. 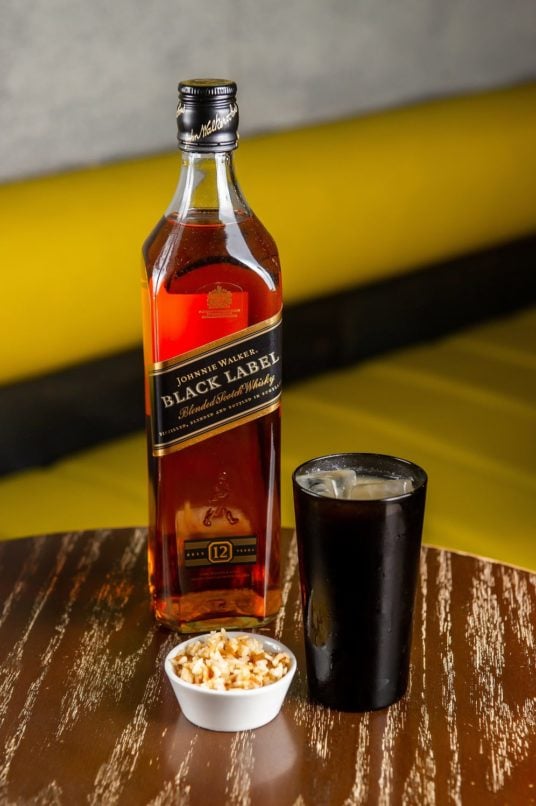 Quinary gets not two but four cocktails thanks to two resident mixologists in the running for World Class. Shelley Tai’s seemingly simple entry for Black Label is a lesson in contrasts, consisting of just two ingredients: whisky and smoked rice amazake. The caramel-coloured whisky is paired with a creamy white rice wine, which was made and smoked in-house using soaked white and brown rice, smoked with apple wood, then fermented with rice koji.

5
Coffee, Tea and Me 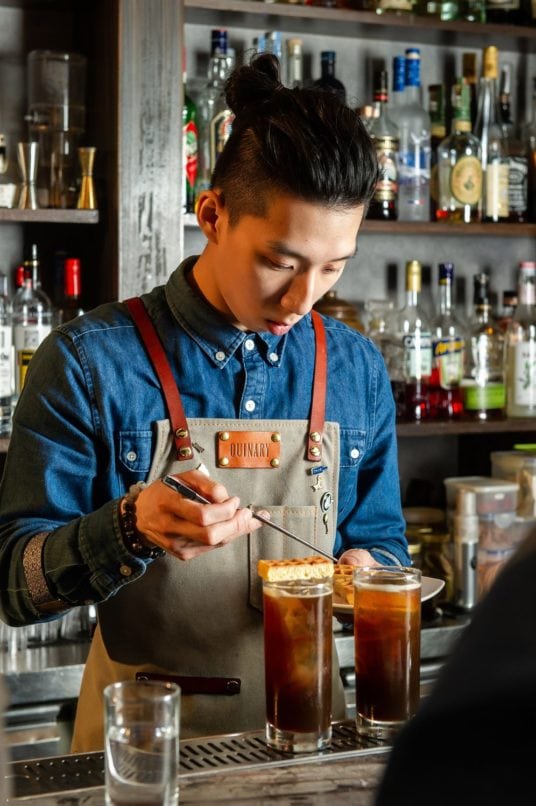 In turn, Hei Chan at Quinary was inspired by the comforting smoke of freshly roasted coffee for his Black Label cocktail entry. It’s also an attempt to instill the sense of human warmth and hospitality that you can only find in neighbourly coffee shops. Johnnie Walker plays with the awakening flavours of Lapsang Souchong tea infused with hand drip coffee, Mr. Black Coffee Amaro, maple syrup and a touch of soda — all stirred and served with a maple syrup waffle. Over at Kerry Hotel’s Red Sugar, Nikita Matveev has gone head over heels for grilled fruit — particularly apt for the summer season. His whisky entry features an astonishingly complex roasted piña colada coffee soda — he dives into the beautiful caramelised and smoky flavours found in charred pineapple, complementing it with exotic flair using roasted coffee and coconut liqueur. Carbonated then poured on top of whisky, it’s then finished with a spritz of Black Label infused with Lapsang Souchong tea and garnished with smoked popcorn and orange peel. 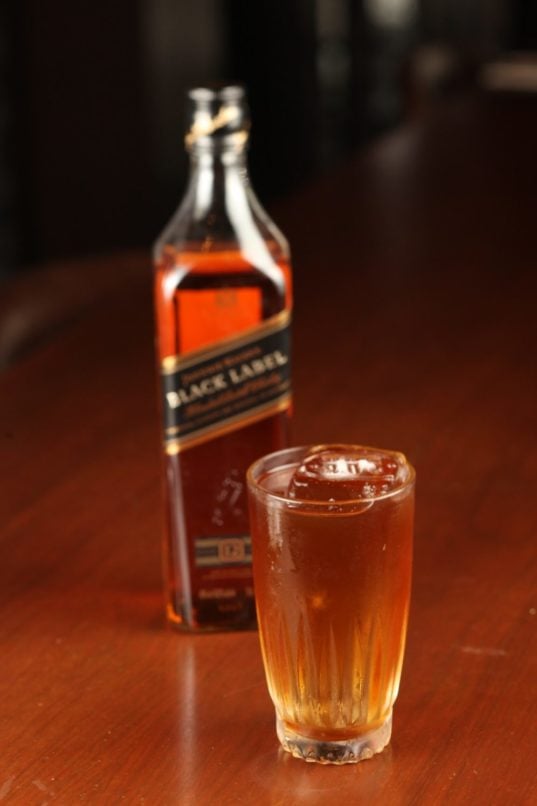 It’s not the first time in history Johnnie Walker has been paired with tea, but Nikki Che’s concoction at 208 Duecento Otto is certainly a compelling combination utilising genmaicha — Japan’s smoky popped brown rice green tea. Infused in liqueur, the tea lends a comforting nuttiness that’s accentuated with biscotti liqueur and amaro vermouth. Similarly, simplicity is also favoured in her Tanqueray No. TEN entry, which balances the bitterness of grapefruit undertones with a sweet champagne syrup. 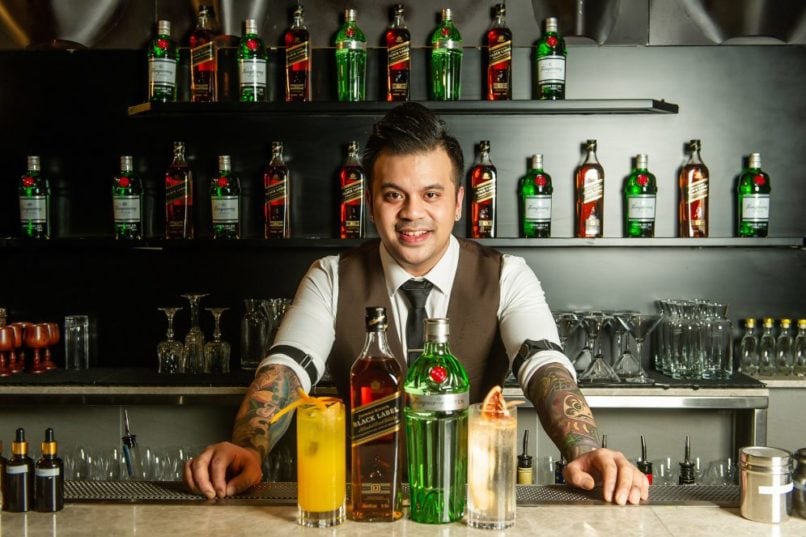 Influenced by the melting pot of cultures and experiences that make up Hong Kong, Strings Attached is Paolo Quejano’s ode to community — it’s about bringing eclectic ingredients together into a unified whole. There’s tangerine soda, homemade peanut butter extract, smoked nutmeg, turmeric and yuzu. Once combined, all the flavours meld together resulting in a wonderfully vibrant highball. 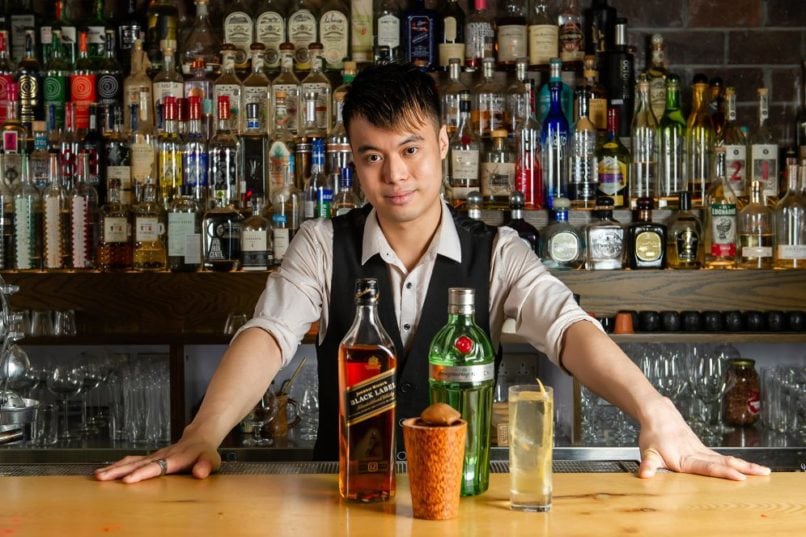 COA’s Robin Leung fills his drink with a flashback of nostalgia for old Hong Kong, conjuring up memories from his childhood spent on Temple Street, with its aroma of thick incense and charred wood. Leung interprets this by smoking his own hand-cut ice cubes using Guaiac wood, also considered a ‘tree of life’ in the American subtropics. Coincidentally, it’s also ubiquitous on Temple Street. In the cocktail itself, Black Label interplays with a homemade “licorice lemon” — a traditional Hong Kong snack made of pickled Thai lime and vanilla — which matches well with the plummy, raisin-y and sweet vanilla notes from the whisky. Stirring in the smoked ice is the final flourish. 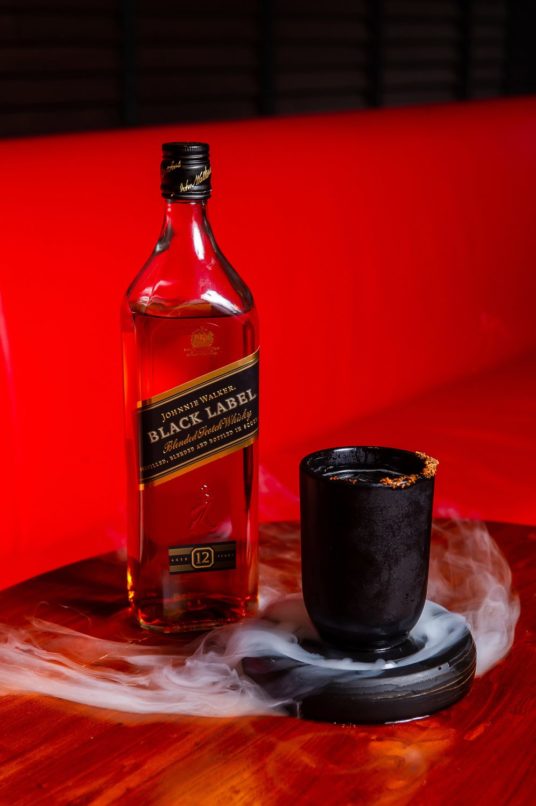 Fang Fang is no stranger to the home-made movement when it comes to all kinds of esoteric ingredients. For World Class, Suman Gurung has made his own limoncello, his own Lapsang Souchong kombucha, as well as his own chamomile soda (infusing citrus and tea in Ketel One vodka via sous vide technique, before carbonating the results). For The Striding Man, Gurung adds his limoncello and kombucha to Johnnie Walker, then tops it off with a splash of soda, served in a glass rimmed with freeze-dried soy sauce for a kick of umami in every sip.