Over the last half decade, it’s been extremely gratifying to watch as a growing number of Hong Kong’s brightest bartenders strike out on their own — in an effort to develop independent, distinctive, local hospitality concepts. To wit, for reasons both financial and logistical, these have frequently taken the form of a cosy and surreptitious venue: often directly managed by the owners; often serving beverages with a very well-delineated theme. Tell Camellia is definitely all those things, and yet it’s also a welcome herald of the diversity that is growing within the Hong Kong bar community. Smart, focused, and refreshingly devoid of superfluity, the city’s first ‘contemporary tea cocktail bar’ doesn’t dominate the conversation — it strikes up one of its own.

Inspired by the camellia sinensis plant from which most teas (in their rawest form) are grown, Tell Camellia throws drinkers a somewhat novel angle: each of the bar’s nine cocktails is inspired by the eponymous tea plant, and the eclectic cultural contexts in which tea is consumed.

“I always say that we’re the only bar in Hong Kong where the tea comes first,” jokes co-founder Sandeep Hathiramani, “and the alcohol comes last.” Along with his partner, award-winning bartender Gagan Gurung, Hathiramani’s passion for a good cuppa is evident the moment you set foot inside the venue: it’s a theme that is confidently articulated, throughout the furnishings and the menu, which necessarily also means that — as Hathiramani himself admits freely — Tell Camellia is a concept best enjoyed with a lucid palette and an open mind. 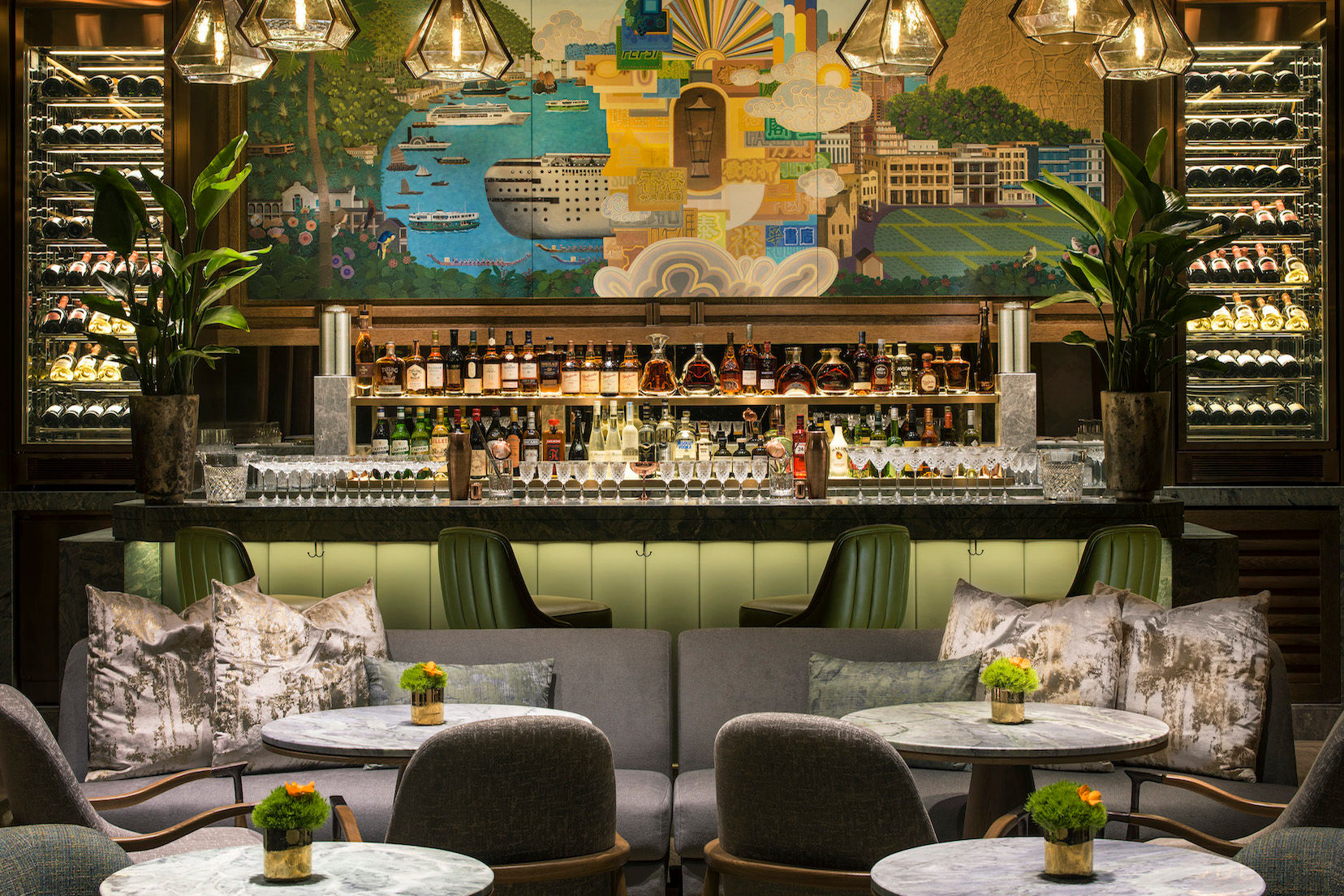 Tucked down an alley underneath newly bustling H Code, Tell Camellia’s location is a boon to drinkers who favour comfortable acoustics and a convenient location. Despite being in the thick of Central, the venue hints convincingly at tea country before you’ve even set foot indoors. Neatly potted bamboos flank the entrance, offering a refreshing departure from the surrounding quagmire of offices and cobblestones. Inside, the decor embraces a multitude of references to international tea cultures — some more oblique than others.

It’s always promising when a fit-out manages to ‘wink’ (as opposed to ‘screech’) the predominant theme of the venue; and in the case of Tell Camellia, the effect is of escaping to a cleverly secluded woodland sanctuary — that just so happens to be populated by darjeeling obsessives. Traditional tea making utensils line the shelves and insides of countertops, whereas the distinctive wood beamed ceiling alludes to the mountainous locales of Asia, Africa and Oceania where  tea abundantly grows.

Given that not everybody will arrive at Tell Camellia waving a branch for cocktails (much less, artisanal teas of the world), Gagan and Hathiramani have wisely chosen to abbreviate the menu into two distinct sections. The shorter of these, entitled ‘T & Tonic’, is themed exclusively around tall drinks — fashioned upon gin that has been redistilled using ‘non-Camellia’ teas. (Hathiramani explains that the term encompasses all herbal/fruit infusions that don’t come from the leaves of the camellia sinensis tree.)

Approachable in appearance and flavour, each of the four T & Tonics — which always includes one booze-free option — constrains its focus to just two ingredients, producing a beverage in which the tea flavours are clean, magnified and dangerously drinkable. The Mango & Strawberry (HK$95) is eerily accurate in depicting the former’s sweetness and the latter’s texture; whereas the exciting ‘push-pull’ dynamic inherent in food pairings is explored through the Italian Almonds & Truffle (HK$95).

In a sustainable effort to use less garnishes, every T & Tonic is served simply in a glass decorated with a recycled tea leaf — the colour of the leaf alluding to the primary flavours in the drink. (The non-alcoholic Rosemary & Sweet Lime (HK$95) is served with a green leaf, for instance.) It’s an original presentation that’s thoughtful on multiple levels: quickening the preparation process whilst cracking down on wasteful practices in the industry at large. (According to Gurung, thousands of perfectly good limes go to waste every weekend in the Hong Kong bar scene due to inadequate training around sustainability.)

On the ‘Teatail’ side of things, a similar logic is at work. Each beverage is named for the place where the tea blend it uses was produced; and captures several of the iconic flavours and tea-drinking traditions of that region.

Japan (HK$95) — the venue’s notoriously photogenic ‘floating’ cocktail — is an ode to the country’s tea-making rituals and pescatarian delicacies. The drink is served in an unostentatious wooden vessel — modelled after the chawan that is customary in the preparation of matcha. Both evaporated and redistilled green tea is used, which alternately adds intensity and balance to the beverage’s distinctive astringent flavour. For an initial hit of richness, Gurung chose to sprinkle this cocktail with a garnish of seaweed and plankton, leading to a drinking experience that starts out as an umami bomb before secondary, pleasantly lactic flavours (i.e. pumpkin seed) start to come through.

For something more along classic bar book lines, the Kenya (HK$95) incorporates plenty of layered flavours that also double as nods to the eponymous country’s agricultural heritage. The bracing, phenolic signature of Marinyn tea is blended with banana and sweet potato, then finished using cornflakes-infused tequila. The result is a smooth, featherlight sip — one which manages to balance the sweet with the sour, and the nutty with the vegetal.

Though still very much a soft opening kind of operation, there’s more than enough evidence to support that Tell Camellia is in it for the long haul. Hathiramani and Gurung’s new project has all the makings of a scene stealer, and it will be fascinating to see whether Hongkongers cotton to the duo’s vision of a place where tea and distillates are ultimately the roadmap by which we discover the far-flung corners of our world. On the subject of why they’ve yet to develop a menu that gleans its inspiration from closer to home (i.e. China and India), Gurung is impish. “It’s too obvious,” he winks. “As arguably the two biggest tea producing and tea drinking cultures in the world, we want to work up to them.” We, for one, can’t wait.