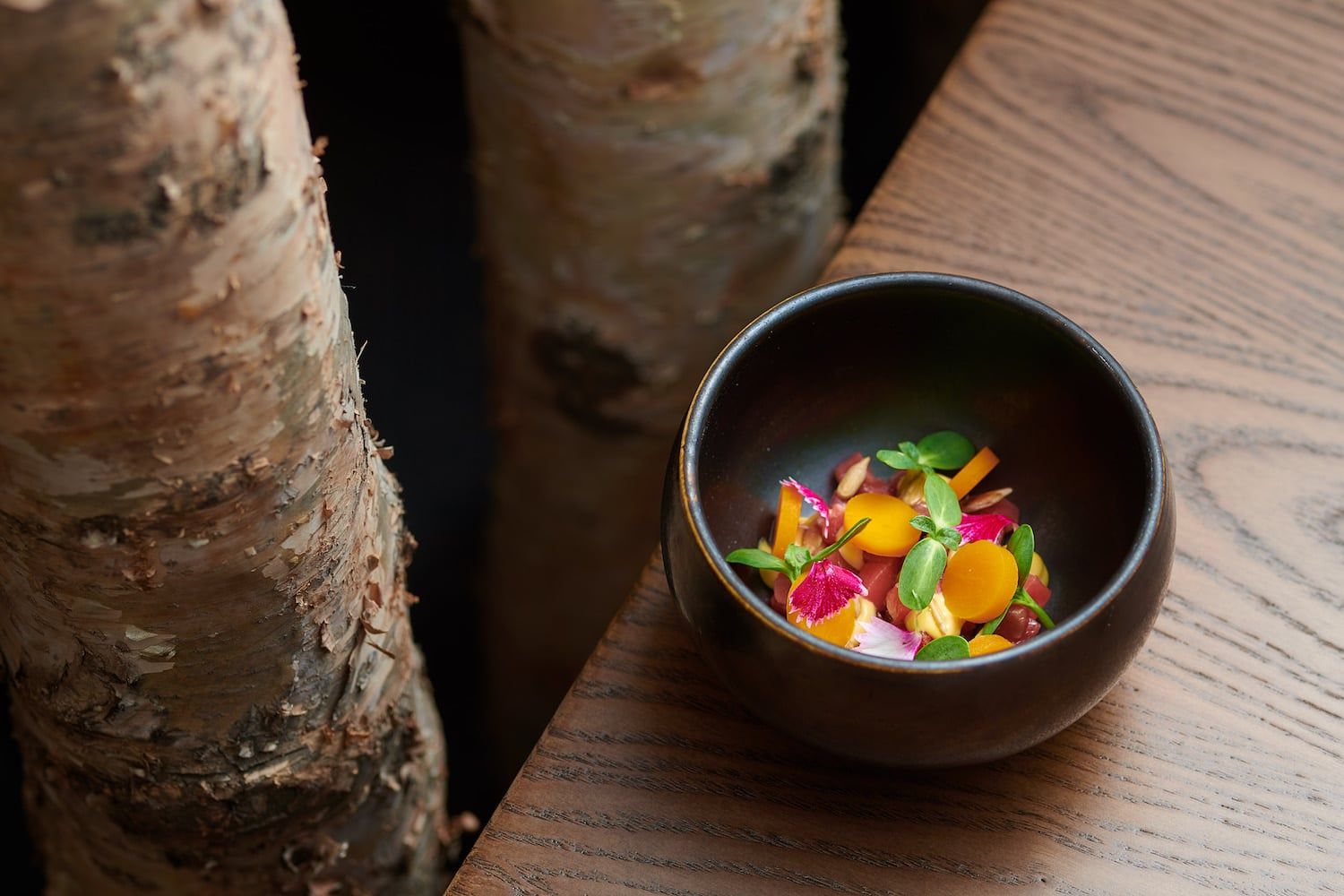 In January, the British chef Simon Rogan launched his first restaurant outside of the UK, Aulis Hong Kong, a 12-seat experimental chef’s table based on the wildly popular twin concept in London. This month, he’s unveiling part two of his shiny new Asia flagship: Roganic Hong Kong, which serves as the more casual sister venue to Aulis, serving dishes that have been vetted on the Aulis menu and deemed worthy of a more permanent rotation in Roganic’s communal dining room.

It’s also the more accessible option: Whereas Aulis’ chef’s tasting menu is priced at HK$1,480 per diner, the newly minted Roganic Hong Kong starts from HK$680 per person for dinner, with a 3-course lunch offered at HK$280. I visited just a few days after the restaurant’s opening; with Rogan himself in town manning the pass, it turned out to be one of the best-value fine dining menus in town.

If Hongkongers have grown a certain weariness of fancy, Michelin-reaching, multi-course tasting menus — many of which seem to be stuck on some platonic notion of the ideal menu contrived specifically for the Hong Kong diner, which almost always involves some form of seared foie gras, a slab of Wagyu beef and a variation on uni (to be fair, Rogan also offers a sea urchin custard, but his trumps nine out of 10 versions in town) — Roganic is here with a much-needed shake-up of the local fine dining scene.

Simon Rogan isn’t from Hong Kong, nor has he spent much time here (Roganic’s Hong Kong operators hunted down the chef at his restaurant several times to persuade him to make the leap overseas), and it shows: Freed from preconceptions and the cookie-cutter templates informed by consumer-driven tastes (ask many a new chef in Hong Kong and they’ll admit to having tempered down their menu to suit local tastes), Rogan offers something fundamentally different to what we’ve experienced in recent years in the top end of Hong Kong dining.

From the moment you enter Roganic, which replaces the old Dining at Murasaki (operated by the same owners), you feel immediately inducted into Rogan’s brand of hospitality; granted, this is in no small part due to the group of smooth, well-practised and for lack of a better descriptor, innately “British” staff (complete with dry humour and regaling tales of serving Prince Harry and Princess Diana back in the day), many of whom will disappear in a few months to return to the UK after setting Roganic Hong Kong on its own two feet. Nonetheless, it’s a great first impression: The confident and polished demeanour of the staff complementing the experienced professionalism of the kitchen, the whole restaurant operating like a well-oiled machine the way few new kitchens do.

A meal at Roganic comes with the option for a Short Taster Menu (HK$680) or Long Taster Menu (HK$980), both with the option of wine pairing (HK$330 and HK$580, respectively); to be clear, neither can be considered “short”, with the less expensive menu clocking in at around 10 courses. Dinner materialises as a parade of bite-sized plates, each a fully constructed and self-contained concept, most gone in about two luxurious bites. Unlike most multi-course menus where you’re bound to land a few misses or at least a few less enthusiastic filler plates, the early consensus about Roganic seems to be that every dish hits a high note, with all the confidence of a greatest hits album from start to finish.

I adamantly agree: Out of a menu that must have included at least 10 different sauces, six types of protein, and a homemade bread course, only one minor mishap — a gluey and bland corn sauce on the duck that tasted nothing like corn — was a minor hiccup in the menu. It’s an impressive feat for a chef making his overseas debut.

I’ve always been one to find more interest in the beginning of the meal than towards the end, the former comprised of a series of truly creative, innovative and thoughtfully constructed amuse-bouches and appetisers meant to tease and tempt the palate; the latter more often than not defaulting to prosaic pieces of protein — albeit perfectly cooked — garnished with the compulsory bed of pommes purée, a silky jus and some sort of caramelised vegetable. Roganic keeps the steady thrum of anticipation all the way through, managing to dress up its heavy back-end hitters with the same creative impulses as the first few dishes to land on the table.

Speaking of which, the amuse-bouches are outstanding, starting with a pumpkin tart carrying an autumnal theme which seems to suffuse much of the menu. (Rogan, amongst other things, seems impervious to the optics of seasonality which seem to dictate every themed promotional tasting menu in town.) The wafer-thin, ruffle-edged pastry tart is piped with a generous filling of pumpkin mousse that nods to Japan with an infusion of nashi pear and bay leaf jelly. It’s a lovely, self-assured bite, a characteristic which also reinforces the next two palate teasers.

I adored the rectangular mushroom wafer, slightly puffed to create a sturdy base for a topping of fermented mushroom puree and tiny pickled mushrooms, sprinkled over with yeast to reinforce the earthy notes of fermentation. It’s an early indicator of Rogan’s inclination toward the pickly and the fermented, with dishes all the way through to desserts leaning more savoury than sweet and relying heavily on textural contrasts and acidity. With so many of Hong Kong’s tasting menus grounded in heavy butter- and sauce-reinforced dishes, this is perhaps the greatest virtue of Rogan’s brand of cooking.

Of course there are exceptions to the rule. The truffle pudding is as indulgent as they come, a soft square of buttery, croissant-like pastry zapped through with the pungent taste of fresh truffle purée. The highlights continue in a spellbinding cep sabayon dusted over with cured egg and spelt, ringed with a bright chive oil; an inky onion and pork jowl broth, the earthy depths perked up by a lively assortment of pickled veggies, burnt onion leaves and nasturtium; and Rogan’s signature charred salad, which is a seemingly humble yet palatable stack of cherrywood-smoked vegetables (broccoli, cauliflower, and kale formed the base during our visit), served on a pool of Westcombe cheese sauce.

One of my favourite dishes was the chicken and young squid fritter: Camouflaged in its bird’s nest plating, the exterior is stained black with a crunchy coating of tapioca puffs dipped in squid ink, with a mustard emulsion providing a necessary, sharp tang of relief. And our table rightfully swooned over homemade soda bread; a success based on pure, exemplary execution, it’s a soft, warm, molasses-rich bun dusted over with oats and cracked sugar for an inspired muffin-bread hybrid.

Part of the magic of Roganic is in its setting: The contemporary dining room is reimagined as a forest, reflecting the food’s leaning towards earthy, plant-centric ingredients. In one corner, an Evogrow produces the micro greens and edible flowers used to decorate the many ceramic plates and bowls which fly out of the kitchen; overhead, real tree roots cascade from the ceiling like a forest floor upended, interspersed with gold-handled glowing lightbulbs. The roots blend seamlessly into an installation of white birch trunks sectioning off another semi-private space, spaced cleverly apart to allow just a curious peek into the first-ever Roganic Dessert Bar (available as an à la carte experience or as a 5-course dessert tasting menu for HK$480).

Intrigued? After dinner, head with your party to the sectioned-off room, where cocktails and digestifs flow freely while you watch the pastry chefs quenelle, tweeze, fiddle and fuss over your plate on a wide counter of pristine cold marble. Desserts, unsurprisingly, are fantastic — a palate-cleanser sorbet imbued with the pure flavour of golden beetroot segues to the caramelised apple tatin, composed of what looks like 30–40 layers of Pink Lady apple slices pressed together in tight concentric circles; and a playful, pine sugar-dusted mini doughnut made from the fallen pines of last year’s Christmas trees. The latter could be a one-bite summation of the cooking we experienced at Roganic: wildly creative, technically sound, rooted in nature’s bounty and joyfully free of convention. 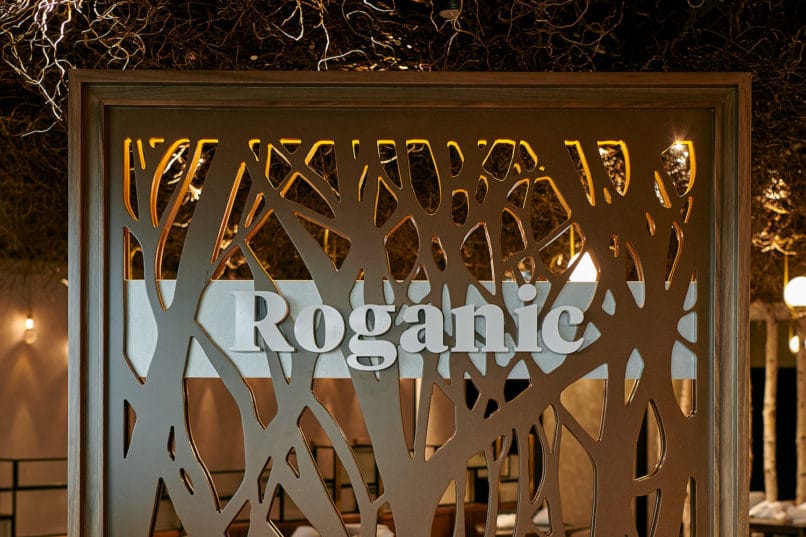 Restaurant Review New Restaurant Tasting Menu New Opening new menu simon rogan aulis roganic roganic hong kong
Leslie Yeh
Editor in Chief
Having worked as a lifestyle editor for almost 10 years, Leslie is thrilled to be writing about the topic she loves most: wining and dining. When she's not out pounding the pavement for the latest new restaurant opening or tracking food trends, Leslie can be found at home whipping up a plate of rigatoni vodka and binge-watching Netflix with a glass of Sauvignon Blanc in hand.
Dining Restaurants Food Trends Drinks Travel
Sign up for our newsletters to have the latest stories delivered straight to your inbox every week.