There are chefs who cook to live, and chefs who live to cook. Nathan Green, best known as the former chef of Rhoda, falls in the latter camp: For months, he’s been holed up at his new home, Henry located inside the Rosewood Hong Kong: calibrating spice levels of various homemade hot sauces, testing the best way to season and sear about a dozen different meats, and perfecting his technique with flambées (peanut butter baked Alaska? whisky-glazed ribeye?).

Backed by the vast resources of the posh hotel and liberated by the colourful foodways of the American South — spanning a rainbow of culinary influences from Japanese to Mexican (“Can you imagine an artist with a lot of different colours? I [have] all new colours to paint with,” he tells us during our visit) — Green and his team have succeeded in a steakhouse worthy to be considered in a class of its own in Hong Kong. At a time when southern cuisine is in the midst of a vital renaissance States-side, Green & co bring some of those time-honoured traditions to our shores. 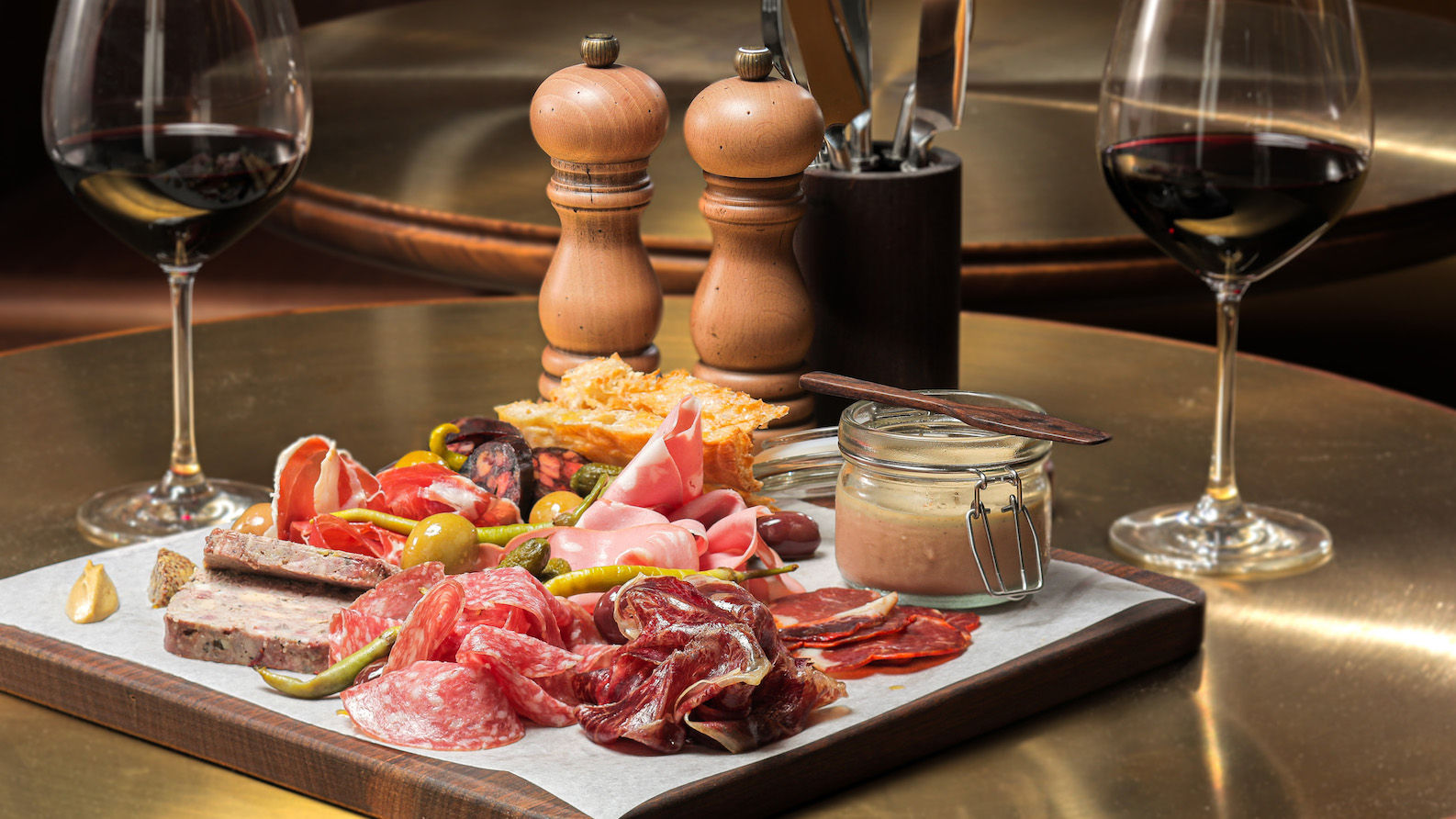 With handsome furnishings rendered in dark reds and browns, over-sized leather banquettes, and a marble clad bar, Henry doesn’t so much ditch classic design tropes as reimagines and elevates them: Referencing the popular style of dining at its mid-century heydey, the classic American steakhouse has been ushered into the 21st century here by Parts and Labor Design New York City, with gorgeous interiors outfitted with round pendant lights and brass accents to help lighten the moody colour palette.

The ambience is relaxed and convivial, with flexible table configurations allowing for large group celebrations (a private partitioned room also seats up to 10), couples or families. The lively buzz that courses through the dining room is further sparked by theatrical table-side dining from the wait staff, whether it’s a smoke-infused cocktail or a flambéed dessert. A small leafy terrace is ideal for enjoying an American-style aperitif while overlooking the promenade and Victoria Harbour; while those leaving the restaurant will want to make a pit stop at the butcher’s shop in Bayfare Social, a takeaway shop featuring dry-aged heritage breeds, homemade terrines, sausages and bacon to take home.

You can’t talk about the food without first mentioning ingredient sourcing — this is essential to what makes Henry special. Through the nurturing of exclusive relationships with farmers, chef Green has brought to Hong Kong some of the most venerated ingredients from the American South, many available for the first time in Hong Kong: 44 Farms Texas 120-days grain-fed Black Angus, available in choices of T-bone or porterhouse cuts; Becker Lane Farm pork chops, a 6th-generation farmer raising a cross between Berkshire and Cheshire White heritage breeds; pampered purebred Elysian Fields lamb, co-produced with the master chef Thomas Keller; and Brandt Ranch 100% pure-breed Holstein cattle.

Then there’s dried mountain country ham and bacon from Allan Benton — deemed by many, including the chef David Chang — as producing the world’s best bacon, prized for his elusive formula of pork, salt and smoke; and grits — true Southern-style grits — made from the heritage grains that chefs like Sean Brock of Husk (one of the central figures in the American southern food scene) have helped to revive and catapult back into the mainstream.

These ingredients are duly researched, thoughtfully handled and presented with care by Green, himself a proven master of flame and fire. You should absolutely order the 44 Farms 90-day-aged T-bone (HK$658 per 450g); the oblong hunk of beef arrives at our table marvellously seared and measuring a few inches thick, each steak topped with two pats of vanilla butter. Chef Green heats up a small sauce pan of Woodford Reserve Bourbon before setting it aflame (yes, it’s that type of restaurant) and pouring the whole thing over the steak, the fire fuelling a maillard reaction whereby the vanilla butter fuses with the bourbon to create a gorgeous caramelised crust on the meat. The steaks come with an array of house sauces — a tomatillo ancho sauce, red wine shallots, a brandy and port based jus, and a sumptuous blue Béarnaise — for you to pair at will with the whisky-infused ribeye, the giant Tomahawk, tenderloin or flank steak.

For the Seven Pepper Beef Brisket (HK$298), the Brandt USDA prime cut arrives in a giant pink-brown slab ringed with a circle of fat. While the meat could be more tender and the fat more evenly rendered, the little pot of espresso sauce — smooth and dark like molten chocolate — is an inspired pairing. Porcine fans will want to tuck into the Becker Lane Farm Pork Chop (HK$398) with pickled mustard seed; while the Elysian Farm Lamb Rack offers solid value, priced at HK$538 for four decent sized chops.

With the fat upon fat, you’ll need an antidote to cut through the richness: for that, you can look to the Fire Roasted Salad (HK$88) a jumble of charred peppers, tomatoes, onions in a bright lime and coriander dressing, roasted smoky tomatoes that taste like they’ve taken an overnight turn in a campfire, and a zippy parsley salad which acts as a palate refresher.

More enticing than these, however, are the sides that don’t have any redeeming healthy qualities at all: from cajun spiced curly fries (HK$58) to charred corn spiced with harissa under a snowfall of parmesan (HK$68), and mashed potatoes that get fancied up with pig’s trotters and a splash of madeira (HK$88). You may be tempted also, like us, to scoop every last bite of the Jimmy Red grits (HK$108) with pickled okra and ‘Burnt Ends’ — caramelised nubbins of short rib with the fat melting into rivulets of gravy that seep through the softened cornmeal. It is, without question, one of the best things we’ve eaten all year.

With large-format meats anchoring the menu, some of the seafood and starter dishes can start to seem slightly superfluous. An appetiser of raw scallops and blue prawn, with small translucent coins brightened with pink pepper and lime (HK$248) was a nice palate-whetter but hardly essential; while a seafood jumble of gulf prawns, clam and corn in Creole spice (HK$498) couldn’t manage to steal the spotlight from the superlative meats. It’s no surprise that some of our favourite starters doubled down on meat, from the gorgeous homemade Butcher’s Shop Terrine (market price), the fat countered with a sticky-sweet cherry chutney; to the cold-smoked steak tartare (HK$198), a blend of flank, tenderloin and striploin shot through with the tangy vein of chopped capers and crowned with a single cold yolk.

As expected at a southern barbecue restaurant, drinks are strong and spirit-forward: expect an impressive selection of American beers, bourbon and rye whisky, with the cocktail list covering classics such as the Old Fashioned (HK$120) made with Rebel Yell bourbon whisky; and the tabasco-laced Michelada (HK$120) with a savoury injection of clamato juice. For oenophiles, a largely American-centric wine list includes around 200 labels of magnums-only from Napa and Bordeaux, and an “Underdogs” section spotlighting boutique and lesser-known wineries.

With its focus on butchery, meat-curing and live-fire techniques, Henry is an ambitious undertaking in bringing to light the traditions of American barbecue and beyond. Classic recipes are given nuance through diligent sourcing and creative execution, while banishing the tired image of southern cuisine as a plate of fried chicken, watery grits and wilted collard greens. More than just providing a respectable space for red-blooded carnivores to gnaw on Tomahawk bones judgment-free, Henry’s significance lies in its thoughtful excavation of American foodways — offering the most complex and comprehensive showcase of these heritage traditions that Hong Kong has seen thus far. With chef Green pioneering a new culinary conversation between our shores and the booming southern food scene, we have every hope that Henry will continue to burn as bright as that table-side whisky flambée.