Home > Food & Drink > Reviews > Review: A taste of the ocean’s treasures at Rech by Alain Ducasse 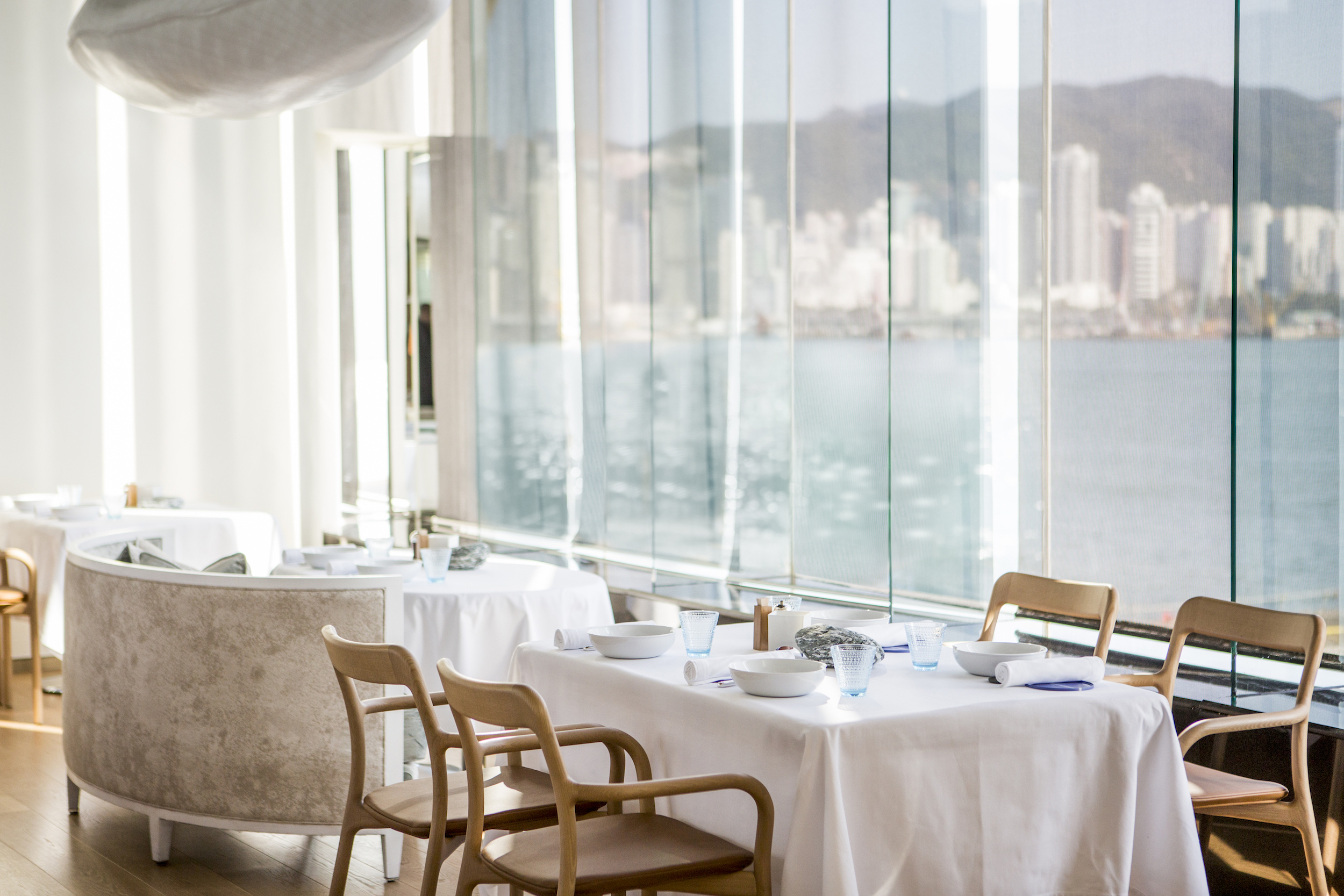 Review: A taste of the ocean’s treasures at Rech by Alain Ducasse

Food & Drink
Review: A taste of the ocean’s treasures at Rech by Alain Ducasse
Share this article
Next article

Rech by Alain Ducasse is the first international outpost of Paris’s famous seafood institution, Rech, founded by Adrien Rech in 1925 and taken over by celebrated French chef Alain Ducasse in 2007. The restaurant aims to create an authentically French seafood experience, showcasing pristine, seasonal fish and fresh oysters flown in from France and other parts of Europe.

Located inside the InterContinental Hong Kong, this seafood temple replaces the former SPOON by Alain Ducasse, which first opened in 2003. “It was clearly time for a change,” said the esteemed chef, with the decision to establish another branch of Rech further solidified by Hongkongers’ strong love of seafood. Helming the Hong Kong outpost is head chef Stéphane Gortina, who’s worked with Alain Ducasse for over 11 years and previously headed the kitchen at SPOON.

The iconic location and atmosphere are truly unbeatable: The spacious venue sits right on the waterfront, framed by tall windows looking out on Victoria Harbour and the Hong Kong island skyline. During the day, plenty of natural light floods the airy, ocean-inspired interiors; by night, the mood is intimate and atmospheric, with candlelit tables accompanied by a stunning backdrop of twinkling city lights and bright-red sails meandering across the harbour.

The designer is Marie Deroudilhe, a long-time collaborator of the Ducasse empire who also led the revamp of Rech Paris in 2012. For the Hong Kong outpost, she’s taken signature elements from the Paris restaurant and added details inspired by the ocean, including seashells and natural stones, bespoke “Branca” chairs — each carved from a solid piece of beechwood — and lamps composed of 3,000 pieces of delicate rice paper, meant to resemble floating clouds by day and glowing Chinese lanterns by night.

Like Rech Paris, the walls are hung with signature fish paintings by French artist Jean-Pierre Guilleron, made from actual fish prints pressed on natural paper using the ancient Japanese gyotaku technique. The mix of light, natural wood paired with deep cobalt-blue accents evokes a beachside setting that hits the perfect note of casual sophistication, making Rech an attractive option for a special occasion dinner or a breezy Sunday lunch with the Champagne (Alain Ducasse’s own special label) flowing.

The meal at Rech starts off on a high note, with crispy seaweed crackers and warm kombu bread accompanied by seaweed-lemon butter imparting an unmistakable taste of the sea — a fitting way to set the mood for the parade of ocean produce to come. The menu is fairly easy to navigate, with fresh oysters, seafood platters, and a small selection of raw dishes meant to whet the appetite. We kicked off with the fresh oysters, which were clearly top-grade, from a crisp and briny Fines de Claire N°3 (HK$450 for six), to a rich and creamy Gillardeau N°3 (HK$400 for six).

From the raw selection, the hand-dived sea scallops with citron and caviar (HK$290) was wonderfully refreshing, while the mackerel with shiso (HK$150) packed an umami punch with the sweet and tender belly of the fish getting a flavour boost from caramelisation. The bonito (HK$210) was less remarkable; although well-cooked, the flavours were muted and we wished the romesco sauce carried more zing from the red peppers.

Starters are where prices can start to skyrocket: Three small langoustine ravioli will cost you HK$450 and a shallow bowl of rockfish soup — although well-balanced and flavourful — did not warrant its HK$450 price tag, teaspoon of caviar on top notwithstanding. We’d recommend sticking with the ‘Club’ crab and mango (HK$240), with sweet crab meat stacked between triangles of toast in a light dressing; and the cookpot of spelt, squid and sesame seeds (HK$180), a comforting and delicious bowl of creamy risotto-like grains dotted with tender squiggles of squid and brightened with lemon peel.

The fish & shellfish selection includes a Grenobloise-style skate wing — one of the most popular items from the Paris establishment — pan-fried sea scallops served in their shells, sea bass with “iodized cooking jus”, and a wild cod aioli.

Sold separately by weight is poached lobster with vegetables, and pan-seared sole with tiny potatoes — prepared classically with butter and lemon, and filleted at the table (HK$160 per 100g). The latter was excellent, representing French simplicity at its best. The sea bass (HK$680) was likewise well executed, but the portion size unsatisfactory for a main, accompanied by a single scallop and an even smaller piece of cooked octopus. The root vegetable brunoise on top was a pleasant touch and showed off the meticulous technique of the kitchen.

Rech may be known for its seafood, but the dessert menu (HK$120 each) is well worth exploring. As we found ourselves with stomach space to spare, we dove straight into the “Mr Rech” — hazelnut ice-cream sandwiched between two giant meringue biscuits and coated in melted chocolate. It was indulgent, yet not too sweet thanks to the airy meringue. This was followed by the confit and iced lemon with kombu seaweed, a creative combination which effortlessly tied the ocean theme together in a light, cleansing dessert. Our night was capped off with fresh-baked madeleines — a complimentary treat from the kitchen — and a swig of cognac for a warming nightcap.

Hong Kong’s international dining scene caters largely to those with expensive tastes, and it’s not uncommon to spend HK$1,500 or more at a fine-dining restaurant on food alone, be it a starched-white-tablecloth experience at a Michelin-starred restaurant or a four-hour-long Japanese omakase meal. In fact, the fate of a new restaurant — particularly one headlined by a major international chef — can largely fall upon perception or prestige, and sometimes the multiple dollar signs on the menu work to reverse-engineer a heightened sense of awe in the diner.

This isn’t entirely the case at Rech by Alain Ducasse, where we couldn’t quite seem to reconcile the quality and portion sizes of the food with the prices on the menu — despite the perk of unbeatable views, the prestige of fancy hotel dining, and the pedigree of one of the most lauded French food icons in the world.

Nonetheless, for those with deep pockets, dining at Rech can be a refreshing dive into the deep blue sea, a chance to indulge in some of the finest ocean produce prepared by a world-class team. The details matter here, and you will certainly come away with a renewed appreciation for the simple pleasures of classical French cooking as well as the feeling of being treated like a VIP in one of Hong Kong’s most sought-after dining rooms. For some, that’s more than enough to justify the price tag.

Hong Kong Tsim Sha Tsui Dining Restaurants Seafood Restaurant Review InterContinental Hong Kong Seafood Restaurants Alain Ducasse SPOON by Alain Ducasse Reviews Where to eat Dining Reviews Fish Rech by Alain Ducasse tsim sha tsui restaurants hong kong's best seafood
Leslie Yeh
Editor in Chief
Having worked as a lifestyle editor for almost 10 years, Leslie is thrilled to be writing about the topic she loves most: wining and dining. When she's not out pounding the pavement for the latest new restaurant opening or tracking food trends, Leslie can be found at home whipping up a plate of rigatoni vodka and binge-watching Netflix with a glass of Sauvignon Blanc in hand.
Dining Restaurants Food Trends Drinks Travel