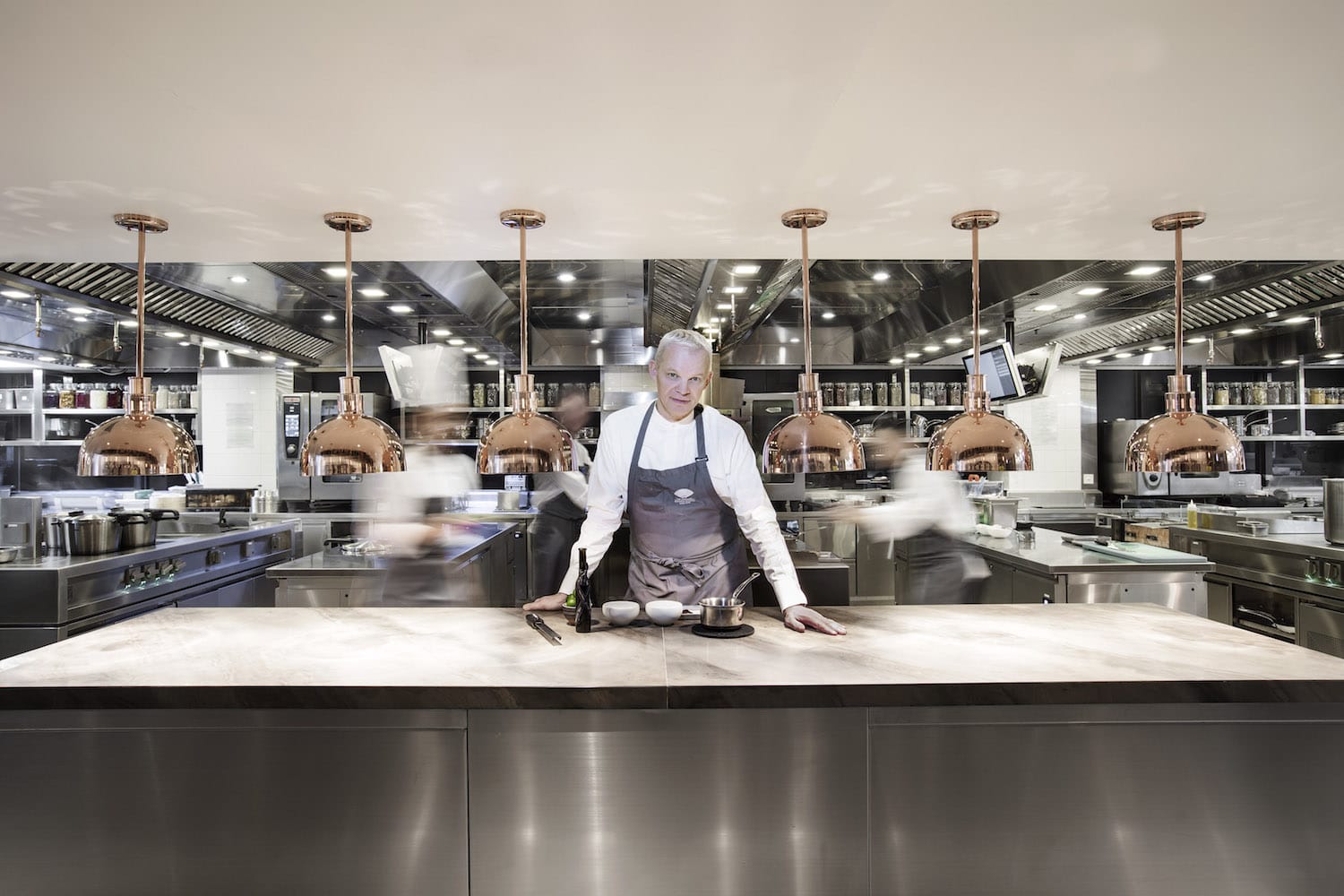 Richard Ekkebus is a household name in Hong Kong. For years — 14, to be exact — the Dutch chef won over diners with his exquisite tasting degustation at two-Michelin-starred Amber, the crown jewel of the (newly expanded) Landmark Mandarin Oriental dining portfolio, and a restaurant widely regarded as one of the best in Hong Kong: It’s previously ranked as high as #24 on the World’s 50 Best Restaurants list. After a decade and a half of spearheading Hong Kong’s fine dining scene, it would seem appropriate — exigent, even — for a chef of Ekkebus’ calibre to push himself and his kitchen in a new direction, not just to stay afloat of the competition, but at a more fundamental level, in pursuit of new challenges and milestones.

But it wasn’t just culinary ennui that prompted Ekkebus to upend his menu at Amber. Following a 4-month hiatus, the renovated restaurant has reopened with a progressive new menu rooted in a healthier mode of eating, one that Ekkebus believes is imperative to the future of fine dining as tastes and preferences shift, and we increasingly face truths about the environmental impact of our reckless consumption. It’s certainly fitting with the current mood du jour, but we’re not just talking about ditching plastic straws or vague pledges of sustainable sourcing: The newly platinum-blonde chef has spent months travelling the globe in search of inspiration for his groundbreaking new vision, followed by weeks of holing up inside Sai Ying Pun’s Test Kitchen with his cohorts, experimenting with and moulding the new menu to exacting specifications.

The changes are certainly radical for a classically French kitchen: A drive to create a more diet-conscious model for fine dining has compelled Ekkebus to give up staples such as butter, cream and sugar, and replace them with all-natural alternative ingredients. Seaweed is used in place of salt, umami replicated through fermentation, and plant-based oils employed to create the illusion of butter. Sugar has been snubbed for agave, maple and honey, while ingredients such as house-made soy and nut milk pop up frequently to replace heavy cream. All-vegetarian and vegan tasting menus are available and even encouraged. Given this revolutionary new approach, Amber 2.0 has certainly got the industry talking.

To coincide with the new change in culinary direction, the restaurant has undergone a complete facelift, the burnt copper tones swapped for a new palette of cream, light wood and gold. The new Amber has been brought to life by Adam D. Tihany, a globally renowned hospitality designer responsible for creating some of the most luxurious properties around the globe, including the Belmond Hotel Cipriani in Venice and the Four Seasons Dubai DIFC. He’s also one of the first designers to collaborate with culinary stars such as Thomas Keller, Daniel Boulud and Wolfgang Puck.

At Amber, Tihany has breathed new life into the space: Gone are the darkly patterned chairs, replaced instead with sleek, cream-coloured banquettes which snake down the centre of the long, rectangular dining room. There are more tables for two than before, with most perched near the windows for optimum views. A shiny, spiralling, gold ceiling installation casts a warm glow on the light-filled dining room, replacing the impressive yet somewhat intimidating copper rod ceiling chandelier which served as the focal point of the old space. White tablecloths have been whisked out of sight, with smooth wood tabletops set simply with earth-toned place mats and circular glass centrepieces.

Guests can choose from the 5-course Amber Experience (HK$1,788); the 6-course Extended Amber Experience (HK$2,088); or the 7-course Full Amber Experience (HK$2,388), including optional add-ons which range from HK$498–$598 per dish. For lunch, we begin our tasting menu with the homemade silken tofu served with lacto-fermented salt tomatoes, almond oil and sakura leaves and powder — a bold statement to sum up Amber’s new culinary ethos from the start. The dish features five types of tomatoes from Fukuoka, with just a hint of fattiness from the addition of almond oil. It’s elegant in its restraint, but the combination lacks energy when paired with the inherently blank canvas of tofu (smooth and silky on top leading to a denser layer on the bottom). While the ferment offers a punch of gut-friendly probiotics, it’s a bit like swallowing our medicine because we know it’s good for us.

Tartare traditionally relies on the juxtaposition of pure, raw beef shot through with the tang of capers and onions; in Amber’s version, the overriding flavour is of an astringent shiraz mayo which has tainted the beef a faint purplish hue. Coins of caper leaves add a welcome tang and brininess, while puffy black rice crackers work much better as scooping vehicles than the side of rustic sourdough, glazed with a beef jus that leaves the bread soggy. We can’t help but hope that a pot of Bordier butter will magically appear on the table.

The next course is the one you’ve likely seen on your Instagram feeds already — think of it as the new version of Amber’s iconic sea urchin and caviar dish (also scheduled to make a reappearance on the menu). Presented in a little jewel pot is a thrilling combination of corn custard, seawater foam and caviar hiding under a glittering, freeze-dried corn tuile which shatters at touch of a fork. Free of dairy, the flavour of the corn custard is intensely pure; its sweetness is balanced by the brine of Schrenki caviar and pop of citrus from sudachi lime, while the silky texture dances harmoniously with the frothy seawater foam.

At this point we’re invited to stretch our legs with a little jaunt to the kitchen, a gleaming fit-out which Amber shares with the hotel’s new wine bar, Somm. It’s a little jarring to go from the hush of the dining room to the hive of activity behind the doors, and we feel like we’ve been thrust into a front-row movie screening of Burnt, seemingly impervious to the cooks as we watch them scurry around their shiny new stations, including Ekkebus himself manning the pass.

A ‘surprise dish’ lands on the impromptu chef’s table: Sprinkled over with tender pea tendrils, the bowl coaxes out the pure flavour of spring peas presented just-blanched so they retain their vivid colour, and in a vibrant green purée. The green orbs sit in a dashi broth infused with grapeseed oil and wakame seaweed, while bits of white bobbing around in the bowl turn out to be finely diced cuttlefish, providing a chewy textural counterpoint to the tender snap of the peas.

If the pea dish is a solid argument in favour of the virtue of vegetables, the next dish is a strike against it. Vaguely Chinese in flavour, the vegan course features cabbage leaves — a seasonal variety from Kyushu — layered like a horizontal mille-feuille, topped with a lone grilled shiitake and served with a mushroom purée that faintly resembles the grey gloop from a tin of Campbell’s mushroom soup. A coating of fermented mushroom powder is the best thing in the bowl and the broth is fragrant, but we can’t justify the myriad steps that went into the dish’s execution against its middling flavours.

A generous fillet of amadai — chef Ekkebus’ favourite fish, and the subject of a giant mural commissioned for the new kitchen — boasts a puffed-up armour of scales which crackle and shatter, unleashing little pools of fatty oils that coat the flesh, lending it a buttery mouthfeel. While the fish is excellent, the remaining components don’t quite gel together: Myriad dots of piped shiso mayo serve little purpose other than lending visual interest to the plate, while a bed of sliced violin zucchini is a fine bed for the various bits and bobbles, but unwieldy to eat without first scraping each ribbon clean.

Desserts by pastry chef Michael Pretet are multi-elemental and show off Amber’s artistic nature at its best. The lime mousse is a masterful creation in shades of green, with a tip to modernist cuisine in forest-green avocado spheres and fluid gels made from Granny Smith apples. The refreshing sake lees sorbet is as pleasurable to eat as it is aesthetically striking, with the snow-white quenelle peeping out under shards of raspberry tuile, so razor thin as to be translucent against a pile of puffed rice and a mouth-puckering raspberry purée.

As we cap off our meal with a dairy-free buckwheat madeleine that somehow trumps other butter-laced versions in town — we muse over the mixed impressions on our palate. Some of the dishes didn’t quite deliver, while others inspired wonder at the flavours extracted from limited ingredients. Perhaps the strongest feeling is one of admiration for the sheer confidence and conviction needed to attempt this idealistic vision of fine dining.

When all’s said and done, chef Ekkebus has achieved an incredible feat by putting forth a bold and progressive new vision for the future, one in which the entire restaurant ecosystem — from street-side diners up to the upper-echelon establishments — systematically embrace a plant-based diet and lean into sustainable food sourcing and consumption. That’s a utopia we can all get behind — but it’s not the one we live in yet.

Casual eateries are perhaps more suited to asking diners to forego certain indulgences and experiment, slowly adjusting their palates and predilections with meals that aren’t costing them an arm and a leg. A place where dinner can cost you more than HK$3,000 with wine and service charge, is — for most, anyway — a special occasion restaurant, a place to splurge on a birthday or an anniversary, lavished with truffles, plumped with foie gras and spoiled with five more courses long after satiation sets in. We’re not convinced the average diner will be willing to give up those indulgences when that rare occasion comes around.

The new Amber, by default, seems to be an experiment geared towards those who can afford to ‘pare back’ while still dropping a fortune on the fine dining trappings of formal European-style service, of elevated cuisine and the privilege of being seen at one of the most expensive tables in town. Hong Kong being the money-centric city that it is, we have no doubt that Amber will find its new place amongst progressive gourmands seeking a sustainable way to feed their fine dining habits. The restaurant was always a playground for the wealthy one percent. With Ekkebus’ new pivot in direction, it may be even more so now.

Landmark Mandarin Oriental Dining Restaurants Amber Restaurant Review Hong Kong Dining The Landmark Mandarin Oriental Reviews Richard Ekkebus Adam D. Tihany
Leslie Yeh
Editor in Chief
Having worked as a lifestyle editor for almost 10 years, Leslie is thrilled to be writing about the topic she loves most: wining and dining. When she's not out pounding the pavement for the latest new restaurant opening or tracking food trends, Leslie can be found at home whipping up a plate of rigatoni vodka and binge-watching Netflix with a glass of Sauvignon Blanc in hand.
Dining Restaurants Food Trends Drinks Travel
Sign up for our newsletters to have the latest stories delivered straight to your inbox every week.