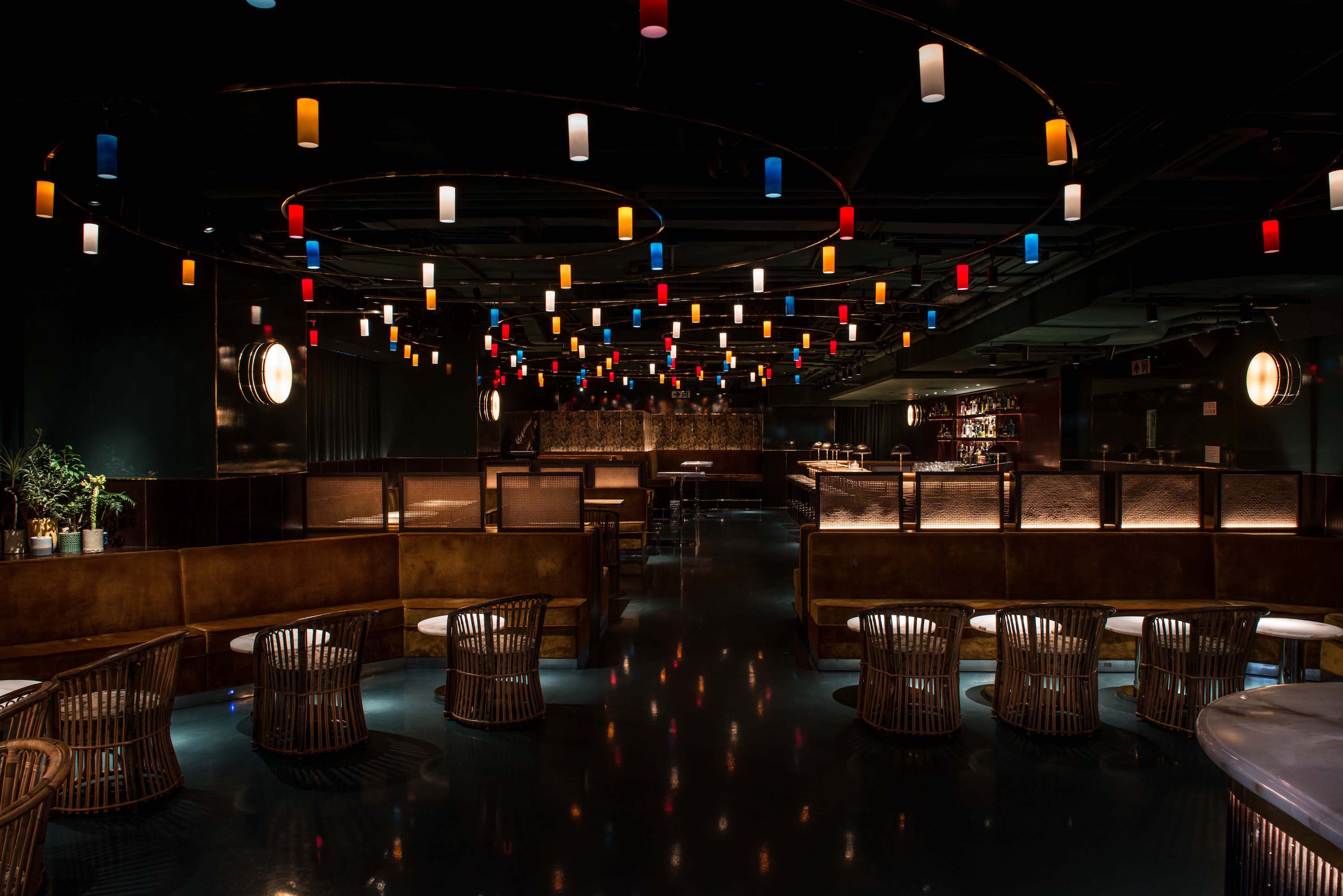 There are two types of people in Hong Kong — those who spend the whole work week waiting for Friday night to come so they can guzzle copious amounts of Champagne at the club (while inevitably ending up at Tsui Wah at 4am), and those who shudder involuntarily at any mention of “dragon-i”. If you’re part of the latter group, you may have wanted to avoid Cassio, the latest restaurant opening under the dragon-i banner, which founder Gilbert Yeung has even lauded as the pre-game spot before the “untz-untz” crowds migrate to the mothership just a few steps down LKF.

With this in mind, we have to say we were genuinely surprised to find the beautiful, vintage-chic space that’s taken over the 2nd floor of LKF Tower, thoughtfully outfitted to nail that perfect balance between restaurant and high-end drinking den. Designed by renowned architect and designer Fabrizio Casiraghi, Cassio blends vintage motifs and patterns from the wallpaper to the sea cushions with shiny onyx-topped bars and metal and gold accents. An iridescent floor reflects the pièce de résistance — a spiraling bronze chandelier from which dozens of brightly-coloured cylindrical lights hang, an installation inspired by the famous Lutrario Dance Hall in Italy.

As for the food, we went in with high expectations after hearing that the kitchen has teamed up with Barrafina — a one-Michelin-starred Spanish tapas bar in London. In this, dragon-i has scored a fantastic collaboration, given the widespread popularity of Barrafina and the ever-growing obsession with tapas in Hong Kong. The kitchen team at Cassio — after training at the London headquarters — is adept (and lightning quick we might add) at preparing some of Barrafina’s signature dishes, from the thick and fluffy Spanish omelettes resembling wheels of cheese to the crispy croquettes and even the courgette flower, which at Cassio is stuffed with Alaskan crab and mushrooms, fried up like tempura, and served with a zingy tomato sauce.

There are 36 items on the menu and a selection of daily specials; in the regular style of tapas, portions are kept small so you can try a variety of dishes, whether you’re a party of two or 20. Start off with some fried padron peppers, a plate of iberico ham and a duo of croquetas — two-bite flavour bombs with a golden-brown, crispy coating and a variety of fillings. The tortilla omelette is not to be missed — we tried the iberico sobrassada version (HK$98), with the runny Japanese eggs and soft iberico chorizo combining to create a bright red intensely flavoured liquid centre (like a Spanish-style savoury version of a fondant).

From the specials menu, the sardines and apple salad was a refreshing surprise, with a mince of garlic and espelette pepper on top to create warmth and heat while the tangy apple pared back each bite. The razor clams were cooked perfectly, given a similar topping of fiery espelette peppers and minced chives. The steamed clams, although bathed in a luxurious butter sauce, were too salty — a heavy-handedness with seasoning that we found present in more than one dish throughout the night.

The highlight of the meal was the Spanish Carabinero prawn, if you can shell out for it (no pun intended) — at a whopping HK$248 for one prawn. It’s served whole, swimming in a shallow pond of seafood bisque, which begs to be mopped up with the plate of focaccia cubes on the side. With their sweet meat and big heads packed with shellfish flavour, these red beauties are a coveted item from the Mediterranean, and Cassio’s preparation was one of the best we’ve had in Hong Kong, in both preparation and the sheer size of the prawn.

The juicy seafood rice is another excellent dish — called “juicy rice” as it arrives a bit wetter than traditional paella, although the grains still retain their individual chewiness. The cast-iron pan is scattered with clams and prawns, a decent portion for HK$178. For desserts, the Macedonia (HK$98) is a signature at Barrafina, and for good reason. Light crispy filo is stacked with clouds of vanilla Chantilly cream, while macerated fruit adds a vibrant freshness to the plate.

Clubs are generally known for their watered-down drinks (perhaps owners think no one will notice in all the noise and chaos?) and unfortunately, this proved to be the case with both drinks we tried: a classic Old-Fashioned (HK$120) and the Esmeralda (HK$198) — a mix of pisco, Jasmine tea, lime juice, Peychaud’s bitters and egg white, which was beautiful to look at (it’s been deemed the “girly drink”) but insubstantial for the price. The sangria, however — from a quick glance at a neighbouring table — was a generous tumblerful for HK$120, which should be a good choice to pair with the various small plates.

Although it blends seamlessly, the venue is separated into three sections: the restaurant, lounge and terrace. An extension of the dining room, the lounge boasts smaller cocktail tables and long sofas for gathering large groups for an early evening drink, while the alfresco terrace is a cool oasis with its lush planters, hanging lights and tropical-patterned wooden patio furniture.

On the night we visited, a DJ was already spinning tracks in the lounge area at 7pm — revving up the pre-club crowds, no doubt. As for the rest of us, we’ll be set up in the dining room, most likely sipping on sangria and de-shelling more of those beautiful prawn heads.

Cassio, 2/F, LKF Tower, 33 Wyndham Street, Central, Hong Kong, +852 3792 0129, cassio.com.hk
Dragon-I tapas Cassio spanish restaurant tapas restaurant where to eat hong kong barrafina al fresco dining central dining LKF tower
Leslie Yeh
Editor in Chief
Having worked as a lifestyle editor for almost 10 years, Leslie is thrilled to be writing about the topic she loves most: wining and dining. When she's not out pounding the pavement for the latest new restaurant opening or tracking food trends, Leslie can be found at home whipping up a plate of rigatoni vodka and binge-watching Netflix with a glass of Sauvignon Blanc in hand.
Dining Restaurants Food Trends Drinks Travel

Review: Doubleshot by Cupping Room champions inventive beverages, made with a barista’s flair