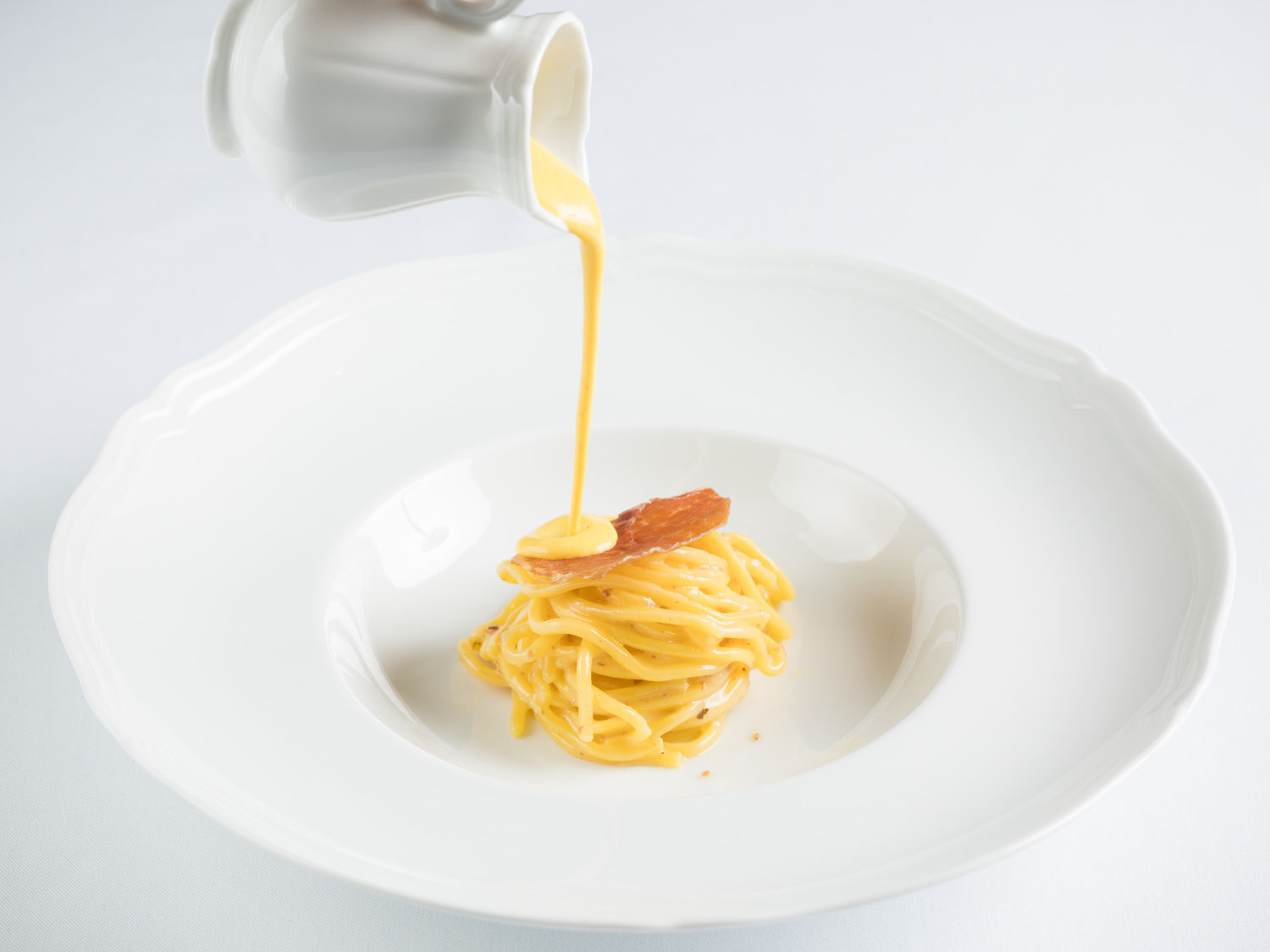 Review: Castellana aims for the stars with a refined take on Piedmont cuisine

Food & Drink
Review: Castellana aims for the stars with a refined take on Piedmont cuisine
Share this article
Next article

In a city where you’re never far from a plate of spaghetti with meatballs or a puffy pizza blanketed in cheese, a regional Italian restaurant such as the newly opened Castellana is a rare gem. Recently opened in the Cubus building in Causeway Bay, the fine-dining restaurant zeroes in on one particular area of Italy, namely the landlocked region of Piedmont, and was opened in collaboration with Marco Sacco, the second-generation chef-owner of Italy’s two-Michelin-starred Piccolo Lago.

Prized for its Barolos and Barbarescos, the famous Alba white truffle, and its rich, slow style of cooking, Piedmont is indisputably one of Italy’s richest culinary regions. Bordered by France, Switzerland and Liguria, Piedmont has no direct access to the sea yet the region is rich in gastronomic delicacies, not least of which is the prized Piedmontese beef celebrated the world over. The fish, meanwhile, comes strictly from lakes and rivers — a stipulation that Castellana sticks to fastidiously, despite the ready availability of pristine ocean produce right here in Hong Kong.

For a restaurant whose food, we’ll discover, is well worth celebrating, the décor at Castellana is strangely uninspired — embracing neither old-world European charm nor stylish contemporary flourishes. Starched white tablecloths and mahogany leather chairs conjure up a sort of clubby, old-school formality; while there may be dozens of these old-fashioned eateries dotting Italy’s countryside, Castellana also lacks any of those charming, idiosyncratic knick-knacks — be they framed photos or heirloom artefacts — that can bring this style of restaurant to life despite a lack of design savvy.

That said, there are plenty of tangible comforts here: comfy chairs, pressed tablecloths and sparkling clean (and expensive) glassware all add up to a place where you can linger well into the night. Arguably the best place is sit is in a side alcove framed by wide windows, where diners can peer out from the 10th floor to watch the outside world go by. Separating this area from the main dining room (the restaurant seats 50 in total) is a glass cellar filled with bottles — a sure sign that Castellana, in keeping with the tradition of Piedmont, takes its wine very, very seriously.

Most people associate Piedmontese cuisine with the holy trinity of wine, truffles and cheese. While these admittedly delicious products do feature prominently in the experience at Castellana, the tasting menus reflect a simplicity and restraint that’s rather antithetical to the idea of unbridled gluttony. Settling in for an early 6pm seating on a Saturday, we opt for the Piccolo Lago tasting menu ($1,580 per person), which is composed of seven courses migrated over from the Alpine valley restaurant. Castellana also offers the Traditional Set (HK$980 for 4 courses, HK$1,380 for 7 courses) and the Seasonal Set (HK$880 for 4 courses, HK$1,280 for 7 courses), in addition to an à la carte menu.

Our dinner kicks off with a round of rustic, homemade sourdough — always a good start — followed by an amuse-bouche: a cube of pork cheek on a swipe of earthy porcini purée. Dusted with porcini powder, the one-bite teaser is the first indication of a sophisticated hand in the kitchen, that of head chef Enrico Degani, who trained with Sacco at both Piccolo Lago and Piano 35.

Next, the chive-laced beef tartare is presented on a tablespoon crowned by a single polenta chip, with an accompanying broth that’s as crystal clear in appearance as it is complex in flavour. While the components sing individually on their own, we find the format rather unwieldy: Do you dip the spoon in the broth? Or alternate between chunks of tartare and sips of broth while still holding the spoon? Not quite certain, we eat the tartare first before sipping the last dregs of the soul-soothing broth.

The tasting menu progresses with a black garlic risotto that frankly, should turn every other risotto in town green with envy. Glossy and stained an inky midnight black — the umami has been steam-rolled into every individual grain of rice, electrified by little pools of lake weed jelly and a viola cheese cream with just the right hit of funk.

If you had good intentions to cut back on carbs, you can kiss them goodbye with Castellana’s carbonara ‘A Koque’: an absolute triumph of a classic that’s been recreated and reimagined hundreds of times. What Castellana churns out is a superlative version  — a twirl of toothsome tagliolini sitting in a pool of liquid gold (as creamy and buttery as any cream- and butter-less sauce has any right to be), the egginess tamed by a clever and subtle infusion of gin and raspberry. Crowning the pasta is a single piece of Vigezzo Valley cured ham, which shatters with a necessary hit of salt and pork fat.

To preface the first entrée, we’re poured a sip of sparkling Champagne — the same crisp Mirafiore Blanc de Noir 2014 used to kick off our meal — for a welcome palate cleanser. The kitchen gets bonus points for sticking to freshwater fish (a Corregone Lake variety) draped in a blackberry and white wine sauce, but the flavour of the protein is a bit too muddy for our liking. It’s made up for, however, in ample fat content, the butteriness offset by a tart mixed-berry salad.

The tasting menu culminates in the Fassona beef — a prized Piedmontese breed that’s mature and rich in flavour. The tender round filet is dressed in a luxurious beef jus, with swirls of potato leek and foie gras sauce. It’s a clever alternative to dumping a lobe of the fatty liver right on top of the beef — as many chefs are apt to doing — while still capitalising on the flavour pairing of liver and warm beef fat.

A dessert of three tiramisu creations is themed around past (coffee-infused sponge), present (vanilla pudding with mascarpone sorbet) and future (coffee liqueur-filled bon bon) — though none quite justify their presence by outshining their source inspiration: a simple timeless square of classic tiramisu.

Service at Castellana is polished and well-informed — the maître d’ explains each dish to us in granular detail with confidence and knowledge. That said, the style of service can feel as overtly formal and old-fashioned as the décor at times.

It is the job of the waiter to be discreet; to float about the room noticing the customer without the customer noticing them. At Castellana, you have the distinct feeling you’re being watched (it didn’t help that the restaurant was empty when we arrived at 6pm) with servers finding it necessary to post themselves at the column with a direct line of sight to our table, leading to an uncomfortable exchange of glances and the imperative for my companion and myself to speak in hushed tones. Dishes were cleared the second we finished each bite, and the first half of the meal felt exceedingly rushed.

Of course, the evening naturally segued into more diners filling in the tables around us, which meant we could feel more at ease as attention was diverted and the free-flowing wine ensued. Speaking of wine, Castellana’s pairing was seamless from start to finish — beautifully progressing through the restaurant’s extensive selection of 300-plus Piedmont wines, the full-bodied varietals matching well with the rich and concentrated flavours.

Although we didn’t partake during our visit, truffle lovers can pick out their own lopsided tuber — now seasonal summer black truffles — to shave directly on any dish during dinner, charged at a (shockingly low) HK$5 per gram. The prized funghi also features in several truffle cocktails, including the ultimate splurge: the Truffle Shower (HK$588), a whiskey martini covered in truffles and served with a trio of canapés.

In Hong Kong’s restaurant industry, where name-dropping, celebrity backing and flashy marketing are all frequently used (and often abused) marketing tactics — and where Michelin still holds a great deal of clout, despite an increasing army of naysayers — there’s a pervasive trend of restaurateurs hedging their success against the perils of a low-margin industry simply by linking their restaurant to a famous Michelin-starred international chef.

That’s all to say that we had our doubts when we first read the restaurant was a partnership with Marco Sacco: Usually, these global talents may jet into the city once or twice, perhaps pop up for a few handshakes and photo ops at the grand opening, and ‘consult on’ the menu before disappearing altogether. Left to fend for themselves, these restaurants usually fall into a pattern of middling mediocrity.

Fortunately, that’s not the case for Castellana. Whether or not Sacco had everything or nothing to do with ensuring the quality of the food offerings here, the recipes of Piccolo Lago are replicated with fervent care and integrity by head chef Degani and his kitchen brigade. The end result is food that holds up beautifully on its own merits — refined, eloquent and articulated beautifully on the plate. The next time you’re craving Italian food that goes well beyond spaghetti and meatballs, you know where to look.

Castellana
Address
10/F, Cubus, 1 Hoi Ping Road, Causeway Bay, Hong Kong
Website
Castellana
Phone
+852 3188 5028
Italian Dining Review Restaurant Review Hong Kong Restaurants Hong Kong Dining Italian restaurants castellana
Leslie Yeh
Editor in Chief
Having worked as a lifestyle editor for almost 10 years, Leslie is thrilled to be writing about the topic she loves most: wining and dining. When she's not out pounding the pavement for the latest new restaurant opening or tracking food trends, Leslie can be found at home whipping up a plate of rigatoni vodka and binge-watching Netflix with a glass of Sauvignon Blanc in hand.
Dining Restaurants Food Trends Drinks Travel
Sign up for our newsletters to have the latest stories delivered straight to your inbox every week.