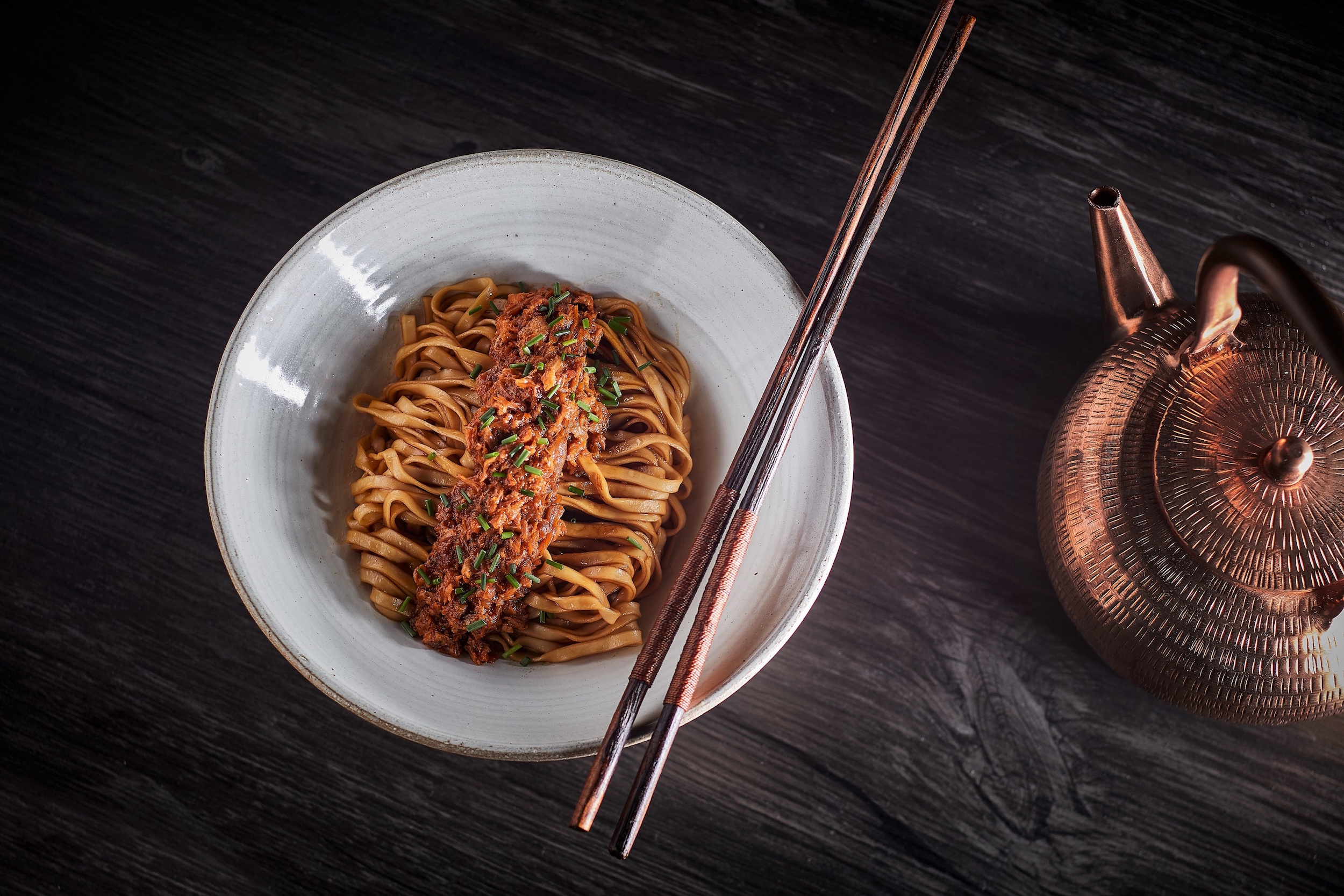 It’s been a rather quiet few years for JIA Group — Yenn Wong’s trailblazing hospitality group responsible for such hit concepts as Chachawan, Aberdeen Street Social and Duddell’s (which recently made its first overseas debut in London) — but the group’s latest opening in Hong Kong — the first in two years — has come blazing out of the gate with confidence and conviction. Old Bailey is a modern Chinese diner that pays homage to regional Jiangnan cuisine in the newly opened Tai Kwun complex, recently opened to the public. With all eyes on the revitalised landmark, this smart all-day restaurant and lounge is on its way to becoming another home run for the prolific F&B group, taking advantage of its heritage surrounds to serve a menu that befittingly bridges the gap between past and present.

Old Bailey is located in Tai Kwun’s JC Contemporary building, a gorgeous architectural feat designed by Herzog & de Meuron. Recalling a modern museum complex you might find in global art capitals such as New York or London, the airy light-wood and concrete interiors of the building are informed by clean, geometric lines, with the focal point being a grand spiralling staircase winding its way up four flights of stairs.

Those interested in diving into the art aspect will want to take a peek around the exhibitions on various floors; if repast is what you seek, however, head straight to the 2nd floor where Old Bailey awaits. You’ll enter first into the Artist’s Book Library, a public space where both patrons and passersby can sit comfortably with an art book or plug in while enjoying a cup of tea and cakes provided by the talented Nana Chan of Teakha. The atmosphere is posh library-meets-garden oasis: floor-to-ceiling windows stream in plenty of natural light, and an array of colourful furniture evokes a laid-back, living room feel — not unlike the Salon at Duddell’s, coincidentally. Sit at the bar counter and cosy up for an afternoon cocktail, or head to the outdoor terrace where you can people-watch over the Tai Kwun courtyard.

Past the lounge sits the formal dining room, which retains the casual vibe but has an added air of decorum thanks to darker tones, expensive fabrics and furniture inspired by the Ming Dynasty, and heavy wooden tables set with colourful china, which we later find out has been carefully sourced to offset the tendency towards brown, neutral colours traditionally found in dark sauce-heavy Jiangnan cuisine. The entire effect is meant to replicate the feel of dining in someone’s home, and that sense of tradition and comfort flows seamlessly into the menu — a curation of childhood recipes, centuries-old classics, and modern updates conceived by executive chef, Wong Kwan Man.

Jiangnan encompasses the region south of the Yangtze River, including Shanghai, Nanjing, Hangzhou, Ningbo, Yangzhou and Suzhou. (“Jiang” is the Chinese word for Yangtze River, while “nan” means south.) With vinegar being one of the key ingredients employed in Shanghainese cooking, it’s only appropriate to start your journey here with a selection of appetisers featuring the acidic cooking staple, from flat slivers of marinated jellyfish (HK$128) bearing a distinctive crunch with 8-year aged vinegar, to the Liangxi crispy eel (HK$98), which arrives as a tangled stack of crispy, fried eel bits glossed in a gravy of vinegar and sugar. Peel one off and pop it into your mouth to savour the delicate crunch, dissolving in a mess of fat, sugar and bracing acidity from Gold Plum Chinkiang vinegar and strips of pickled ginger.

Like fine wines, the catalogue of vinegars here can be classified according to their tasting notes: The 8-year Donghu Artisan Vinegar is dark and malty, the crab vinegar deliciously tangy, and the most widely used Zhenjiang vinegar marked by a more mild tang, boasting a sweet and almost fruity essence.

Vinegar is of course essential to the xiao long bao, which span the gamut from hairy crab and Ibérico pork to the ma la xiao long bao. The latter is one of the standouts on the menu: The plump dumplings, their thin skins tinted pinkish-red by beetroot, wobble satisfyingly in their bamboo steamer as they arrive on the table, promising to ooze their hot liquid insides at the slightest rupture. The delicate pleating shows skill, but these dumplings are more rustic than refined, and once you take a bite, it’s clear they’re a league above your average XLBs: The meat inside is fattier thanks to premium Japanese Ibérico pork, while the invisible yet potent addition of Sichuan peppercorns leaves a faint buzz lingering on the lips. It’s not a hailstorm of heat, but just enough to make you want to go back in for a second or third serving (these come in steamers of just four for HK$98, so plan accordingly).

While much of the menu adheres to classics, a more free-thinking approach is adopted in dishes such as the Jinhua ham mantou (HK$68 per piece), requiring an assembly evoking that of Peking duck or Chinese pork belly buns: slices of marinated meat folded into fluffy steamed mantou with a crunchy veggie and a sticky-sweet glaze. At Old Bailey, however, it’s 36-month Jinhua ham that gets sliced thick and glazed with an osmanthus honey syrup, before being pressed between thin, fluffy mantou squares with a sheet of crispy bean curd (five wafer-thin sheets stuck together individually with shrimp paste). The result is luxurious indeed, a sticky-fingered delight that resonates in flavour and texture.

Other flavours may seem more off-kilter to Hong Kong palates: Both the duck soup with fishballs (HK$398 half, HK$768 whole) and the lion’s head meatballs (HK$198) are oddly lighter than you might expect, the hand-pounded fish balls in the duck soup prepared Hangzhou-style and mixed with egg white to create an almost soufflé-like texture. We still prefer the bounciness of Hong Kong-style fish balls, but it’s the slow-simmered broth that’s a revelation here, an earthy and deeply flavoured stock bearing all the flavour leeched from the bones of 18-month old duck, Jinhua ham, bamboo shoots, and reed leaves.

In the lion’s head meatballs, there’s a similar lightness: Regular ground pork has been swapped for hand-minced French organic pork collar-butt, rendering the meat rather a bit too soft and uniform for our liking, as we missed the little gelatinous bits and texture usually found in the Shanghainese specialty. The seasoning however, is brilliant, a glossy braise of ginger, Shaoxing wine, dark soy sauce and Huadiao wine, perfumed with a spray of still-crisp veggies.

If you have enough mouths at the table, you can’t pass up the ten treasure duck (HK$980, 24-hour advance order required) — once a festive banquet centrepiece that’s faded from modern-day menus due to its labour-intensive process. Old Bailey has taken painstaking detail to revive the dish, deploying two additional ingredients, abalone and sea cucumber to elevate the original eight (Jinhua ham, conpoy, shiitake mushroom, bamboo shoot, dried shrimps, lotus seed, glutinous rice and duck meat). The whole duck is deboned, stuffed with the 10 treasures that have been fried in a fragrant mix of ginger, house-made scallion oil and Huadiao rice wine, and ladled over with hot oil until the skin is a glistening, lacquered golden-brown. Arriving in a ceremonious ceramic pot, it gets spilt open at the table to reveal its treasures, a melange of ingredients imbued with the flavours of reduced duck jus during the cooking process.

While the duck heaps on the flavour, the handkerchief noodles (HK$148) — a dish recollected from chef Man’s childhood — delivers less punch than we expected, arriving as a plain canvas of stir-fried mianpi noodles (a simple dough of flour, salt and water), which despite a pleasant chewiness and a slight browning from the pan, seemed to require something more than the addition of some sautéed greens. The dish might have been true to memory and rooted in nostalgia, but we found ourselves searching for some chilli sauce to ramp up the flavour. More successful are the hairy crab noodles (HK$138), a toss of flat noodles glistening in house-made scallion oil and topped generously with hairy crab roe.

Pigeon is executed superbly all around Hong Kong, and Old Bailey’s tea-smoked piegon (HK$188) stands up to the best of the bunch, arriving enveloped in a Longjing green tea-scented fog, the leaves of which have been fried and scattered over the bird for crunch. The meat is sublime — rich and subtly gamey with an intense smokey flavour. We pair it with the sautéed river shrimp with sweet peas (HK$268), which we find finicky to eat with the tail of the shrimp still on, although the pop of sweet honey peas is crisp and refreshing.

For desserts, you can’t go wrong with the osmanthus and aged rice wine soup (HK$48) and eight treasure rice (HK$88): the former is elevated with a secret aged rice wine and pumpkin-glutinous rice dumplings, while the latter is another refined take on the classic babao fan, the often too-sweet dessert pared back with fresh fruits and osmanthus syrup in place of sugar. If these Chinese-style desserts aren’t your cup of tea (and on that note, any desserts should be paired with the excellent selection of single-origin teas), you can also visit Teakha’s cake selection (HK$60 per slice), from the airy Okinawa black sugar chiffon cake to an emphatically good keemun black tea cheesecake layered with soft red dates.

While Japanese and French cuisines continue to be revered in the realms of haute cuisine for their precise technique and rarified ingredients, it seems that gourmands all around the world are finally coming to realise the complexity and diversity of techniques inherent in thousands of years of Chinese cooking traditions — historically relegated to “cheap eats” in Western culture. It’s this very goal that drives Yenn Wong and Old Bailey: a pursuit of understanding and enlightenment towards Chinese cooking on the global culinary stage.

The sweet sauces, bold flavours and knife-driven techniques of classical Jiangnan cuisine are abundant in force at Old Bailey — filtered through the lens of an effortlessly cool and collected restaurant with its finger right on the pulse of modern-day dining. It’s this type of restaurant that’s doing its part to put Hong Kong on the global food map. And with that in mind, we’re putting Old Bailey on our list of ones to watch for best new restaurant openings of the year. It won’t be long before the siren call of hairy crab noodles and ten treasure duck has us running back.

Review: Pano serves up an artistic twist on nostalgic Hong Kong flavours, with a view to match