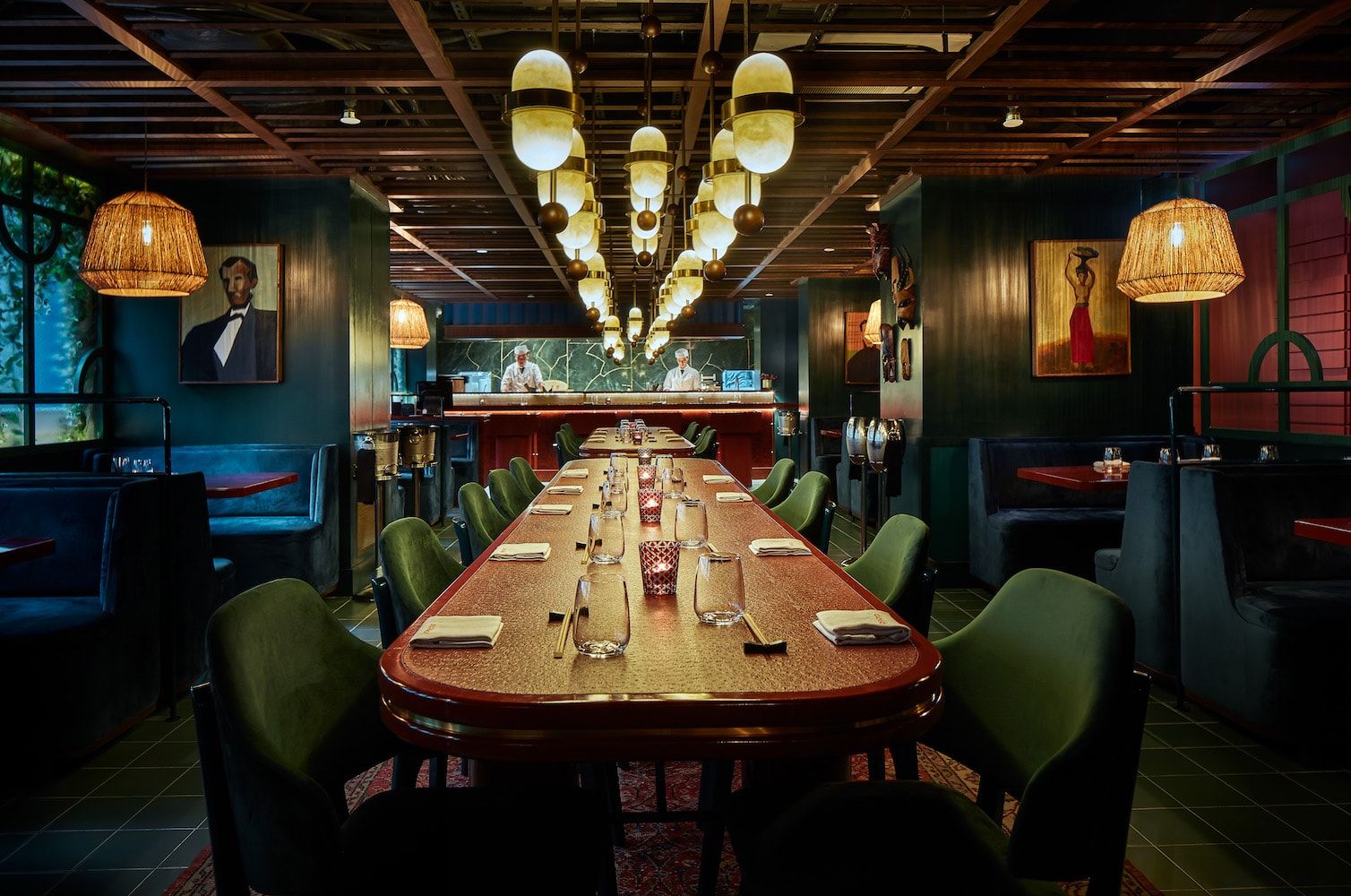 If there’s one thing Pirata Group‘s restaurants are known for, it’s creating safe houses for budget-conscious diners where dinner rarely amounts to more than HK$600 per person (with drinks), yet you always leave feeling stuffed and fairly certain you’ve snagged a great deal. In a city increasingly filled with high-end restaurants that seem to be intent on wringing out every last dining dollar, this tactic of banking off high volume at wallet-friendly prices has worked exceedingly well for co-founders Manuel Palacio and Christian Talpo. (Talpo has recently stepped away from daily operations of the restaurants, though he still holds a stake in the company).

This value proposition rings true at the F&B group’s two recent openings: TMK and Honjo, both located at the corner of Hollywood Road and Queen’s Road West. Follow the punk-rock soundtrack and cheers of the rambunctious staff to TMK, a temakeria that evokes a bustling basement izakaya with its dark, windowless interiors and electrified atmosphere. Upstairs you’ll find Honjo, the slightly more demure and upscale of the pair, complete with a traditional sushi counter manned by toqued sushi chefs.

Which one should you visit? That’ll depend on your mood for the night, with the dual eateries offering markedly different experiences.

In both restaurants, the interiors come to life thanks to the crafty work of local design firm Charlie & Rose. Responsible for some of Hong Kong’s most evocative interiors (Mr & Mrs Fox, Brickhouse, Stockton), they’ve nailed the brief here again, creating two quirky spaces that buzz with a dizzying confluence of textures, moods and eclectic knick-knacks.

At TMK, Tokyo‘s Ginza district meets a grungy biker bar, with an electrifying set-up full of punk-rock paraphernalia. Full-sized robots, a custom Japanese motorcycle in a glass display, and an ice-filled trough for sake bottles doubling as a communal table are clear invitations to leave decorum at the door. Graffiti art is scrawled across the walls, and boxes filled with assorted pop art stickers encourage patrons to add their own decorative art to the space (i.e. plaster any blank surface in sight — a task our group was happy to perform).

Over at Honjo, the atmosphere is decidedly more civilised: Various design aspects seem to allude to the group’s other eateries — think the teal sofas of The Optimist, rich textures and contrasting patterns at TokyoLima, and the homestyle touches of Madame Ching — all mingling in a cohesive and eclectic space that offers a vast departure from other straight-laced sushi parlours in town (the food, it turns out, is also far from traditional).

Designed to be the ‘home of a fictional world traveller’, distinct areas include the main dining room, or Safari House; the Tin Toy Room (filled with miniature toys and tin robots); the Red Armoury, bathed in seductive velvet tones; and the Blue Suite, which functions as a semi-private dining room. Classic Japanese tropes (think samurai costumes and swords) are laid on thick, but thankfully stop short of appearing tacky.

With seating for 120, chances are you won’t have to wait around for a table, but we’d recommend stopping in for a pre-dinner tipple at the bar, situated at the top of the staircase. The drink maestros here are deft at whipping up a well-balanced cocktail; try the Utsukushi Sour (HK$120), a tart pineapple juice and vodka infusion balanced by a frothy egg-white cap.

Neither TMK or Honjo could be considered traditional, although one is decidedly more suited for alcohol-induced antics (no points for guessing which one). We visited TMK on a Tuesday night and immediately felt our mood lifted, propelled by the staff’s enthusiasm and the fun house rule: pay HK$290 and instantly treat everyone in the restaurant to a round of shots (an easy way to keep the sake flowing and make a few friends while you’re at it).

For the menu, guests tick off their choices on an order form, choosing between sharing small plates, sushi/sashimi, and hand rolls. The temaki — TMK’s namesake specialty — are well-executed, with fresh seafood atop soft grains of rice, rolled together in a cone of crisp nori. We devour the Hamachi Tomato (HK$58) from the classic selection, with generous chunks of yellowtail tossed in an herb-flecked marinade and accompanied by slices of red onion, red tomato, and shiso. The soft-shell crab (HK$68) is also a winner, the fried crustacean offset by refreshing cucumber, pops of tobiko roe and a wasabi mayo with a fair kick.

Other hand rolls spin off in weird and wonderful directions, from the salmon taco laced with yuzu mayo to the unagi sansho paired with fresh Japanese salsa and asparagus tempura. The ‘tuna hot dog’ (HK$98) is a heart-clogging but worthwhile indulgence: a log of rice is battered and fried, stuffed with spicy tuna and king crab kani-mayo, sprinkled with furikake seasoning, and drizzled with sriracha mayo. We can’t think of a more delightfully nutrition-less bar snack in town.

The sushi selection is standard — salmon, yellowtail and tuna — but we’re surprised to find our salmon nigiri topped with Pop Rocks for a sly twist that is admittedly as delicious as it is sacrilegious (somewhere, there’s an old sushi master turning in his grave). Hamachi sashimi is fresh but ultimately unmemorable, priced at HK$88 for four slices (the otoro or fatty tuna will run you up to HK$168 for the same serving).

If you need to line your stomach, the fried squid (HK$98) should do the trick, rivalling the chicken karaage at the group’s Nikkei restaurant, TokyoLima, for a best-in-class bar snack; while the Wagyu tataki (HK$118) benefits from a potent hit of calamansi soy, with hot oil and pickled rakkyo creating opposing sensations of spicy and cool. Iberico kushikatsu (HK$108) features deep-fried pork belly in thick rectangular squares, but the fat-on-fat combo is excessive, despite the pickled vegetables on the side.

Like its sister establishments, TMK offers a well-priced chef’s selection tasting menu that lets you sample the highlights of the menu (HK$288 for ‘Denim’, HK$398 for the slightly lengthier ‘Leather’ menu). Fair warning: a substantial portion of the menu is fried, which guests may find too heavy if they’re teetotalling for the night (though if that’s the case, truth be told, you may be better off with a salad at home).

While TMK is all about rock and roll, Honjo on the first floor offers a decidedly more sophisticated experience, with ample room for enjoying a quieter and more relaxing dinner. The menu is also conducive to a group setting, progressing from ‘Raw’ dishes to sushi/sashimi, hot items and tempura, and finally noodles and rice — all made for sharing.

Only open for a few weeks, the restaurant is already crowded when we visit on a recent Tuesday evening. We start with a few well-executed small plates, from a fruit tomato cooked down with Arbequina olive oil to elicit a buttery softness and thrilling sweetness (though not cheap at HK$160 for one small fruit); to a well-composed platter of hamachi (HK$140) rolled in purple shiso with umami-rich white soy and rocket butter. It’s a tad salty, but nothing that can’t be fixed with a slightly more judicious hand in seasoning.

Honjo is ostensibly more upscale than other Pirata Group eateries, although don’t expect much from the sushi department: The seafood selection is limited (salmon, tuna, scallops and few other variations), and without the creative whims employed by its more punk-rock sister, we’re left a bit in the cold with a generic platter of salmon and tuna sashimi that’s served too thick and overly chilled.

The Executive Chef here is San Sebastián native Miguel Huelamo, which explains the unexpected, but not unwelcome presence of Spanish influences on the menu. Take the thin Wagyu slices (HK$150), which come bathed in a spicy pool of chorizo oil, each anointed with a teaspoon of crispy quinoa. It’s a dish that could easily devolve into an oily mess, but the individual components ring loud and clear, the hot oil serving to accentuate rather than overpower the clean tang of the beef.

The tempura selection is one of the fortes of the kitchen: Tender stalks of broccolini are fried to a crisp, arriving with a punchy trio of matcha, hazelnut and pink salts; while the highlight of the meal is the Boston lobster tempura (HK$420), with battered bite-sized chunks served in the shell, a golden-crispy sheath protecting the sweet, succulent meat.

Our final dish is a roasted French baby chicken stuffed with a mushroom- and pancetta-studded rice (HK$260). It’s meant to be a riff on Chinese Beggar’s Chicken, but the bird is overdone and the white meat turns out tough and stringy. However, we’re back on track with desserts (a strong suit at most Pirata Group restaurants), with the Kuromitsu cheesecake (HK$110) winning out with its lush, creamy filling and toasty crust.  A giant vessel of sake is served chilled at the table and the staff are quick to top up our glasses — with over 200 labels to choose from, guests will want to consult the sommelier to pick their poison for the night.

Ultimately, both restaurants have their signature highlights, but TMK offers the slightly better value proposition for now. Honjo is crippled by its attempts at traditionalism but shines when embracing global-leaning sensibilities in more cheeky offerings, from Wagyu chorizo to the tempura lobster. Even as the more upscale of the two, Honjo is by no means expensive, however a few hiccups betray an inconsistency in the kitchen, and diners may be more drawn to TMK’s streamlined offerings and late-night bar vibes. With a few tweaks, both could nail the trifecta of food, a banging drinks selection and inviting ambience, but for now, at least, you’ll likely find us joining the party downstairs.

Food Japanese Dining Sheung Wan Hong Kong Dining Japanese Restaurants Izakaya pirata group japanese restaurant TMK honjo restaurants review
Leslie Yeh
Editor in Chief
Having worked as a lifestyle editor for almost 10 years, Leslie is thrilled to be writing about the topic she loves most: wining and dining. When she's not out pounding the pavement for the latest new restaurant opening or tracking food trends, Leslie can be found at home whipping up a plate of rigatoni vodka and binge-watching Netflix with a glass of Sauvignon Blanc in hand.
Dining Restaurants Food Trends Drinks Travel
Sign up for our newsletters to have the latest stories delivered straight to your inbox every week.