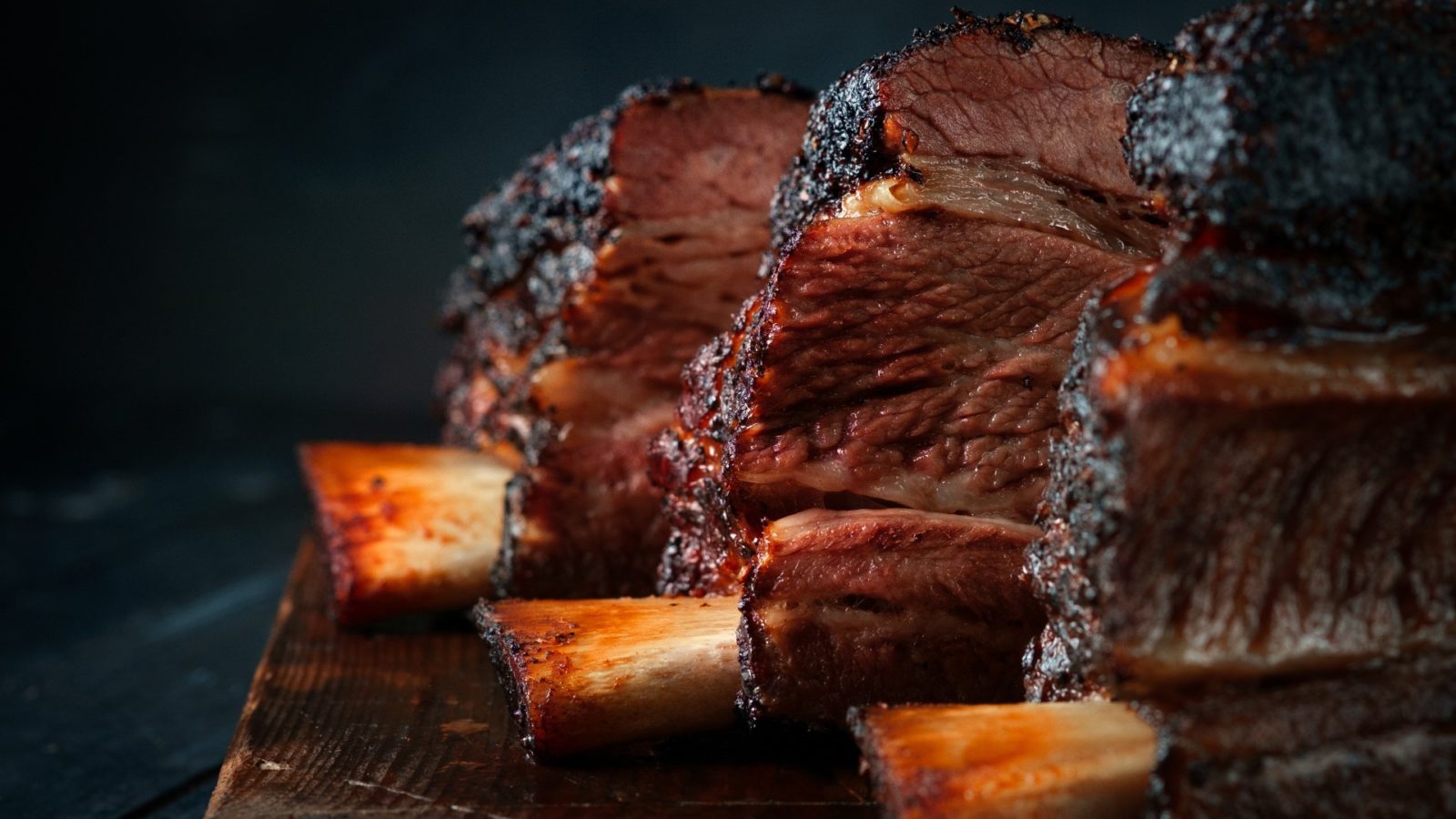 The team behind SoHo’s Kinship — chef-restaurateur duo Chris Grare and Arron Rhodes — have opened a second restaurant where the celebrated flavours of the American South are served in a sleekly designed space.

First things first: In an absurd bit of only-in-Hong-Kong F&B industry intrigue, two eateries with nearly identical names and a supposedly similar culinary focus on American-style barbecue have recently opened their doors in Central. One is Smoke & Barrels, a grab-and-go barbecue concept where the seemingly pan-American menu also includes Detroit-style pizzas as well as New Orleans-style beignets and iced coffee; the other is Smoke & Barrel, a full-service restaurant that hews closer to tradition by placing meats cooked low and slow at the centre of its food programme.

For many Americans, particularly Southerners, barbecue is a way of life, one that requires patience, devotion and even the occasional pilgrimage — it’s almost a religion. (Recent Netflix series ‘Chef’s Table BBQ‘ and ‘The American Barbecue Showdown‘ offer great insight into the difficulty of this style of cooking.) For the uninitiated, it’s crucial to understand what American barbecue is and isn’t: cooking a burger over an open flame is simply grilling, but slowly cooking a brisket, chicken or whole pig for prolonged periods over low but steady heat that imparts a deliciously smoky flavour — that’s American barbecue.

Has Smoke & Barrel mastered this tricky-to-pull-off, labour-intensive style of cooking? We recently visited the restaurant, which opened earlier this month, to find out for ourselves.

The enticing smell of hickory smoke hits you even before you enter the restaurant, located at the corner of Wyndham Street and Glenealy. Follow that heavenly scent inside and the first thing you’ll see inside the staircase leading up to the first floor is a neon sign that reads “Smoke Meat Everyday,” both Smoke & Barrel’s motto and also a winking reference to a certain Dr. Dre/Snoop Dogg rap lyric.

Occupying what was formerly Fish & Meat, the space has been given a handsome makeover by James Dow of Stone Design. Wood, white tile, dark leather, golden-hued lighting and black walls are the principal design components, giving the space a slick, though overtly masculine, feel — a far cry from the humble roadside barbecue joints you’ll find in America.

There’s a 10-seat bar and a semi-private dining room near the entrance, while the main dining area wraps around three sides of an open kitchen. There’s a mix of high tables, low tables and counter seats that face the kitchen, where you can spot the custom-made wood-fired smoker called ‘The Beast,’ which was manufactured in Missouri and required the use of a crane to be lifted into the restaurant for installation.

There are four regional styles of American barbecue — Texas, Memphis, Kansas City and the Carolinas — each with its own unique characteristics. Rather than limiting itself to one style, Smoke & Barrel freely borrows from all four, offering Hong Kong diners a delightful variety that highlights the best of what each region has to offer. Overseeing the kitchen in collaboration with American chef/co-owner Chris Grare is head chef Christopher Tuthill, whose culinary experience includes nine years working in Texas as well as alongside Grare at The American Club in Hong Kong.

Though smoked meat is Smoke & Barrel’s primary focus, the menu boldly features a mix of international influences and non-traditional dishes that would surely shock any hard-line barbecue purist; here, they serve to appeal to discerning diners with a wide variety of palates and preferences. This unorthodox approach is evident in the surprising selection of starters, which include highly non-traditional options such as yellowtail ceviche (HK$148) and steak tartare made with brisket jerky and truffle mayo (HK$158), both nice, but non-essential.

We preferred the grilled romaine salad (HK$98), with the lettuce given a smoky kiss by the fire before being topped with salmon eggs and fat shavings of parmesan, as well as the Burnt Ends Bolognaise (HK$128): fresh pappardelle served with a meat sauce made from flavourful trimmings cut from the ‘point’ half of a smoked brisket. Traditional? No. Sacrilege? Maybe. Delicious? Yes.

For the mains, we didn’t bother ordering anything that wasn’t cooked in The Beast, but grilled sea bass (HK$258), seafood broil (HK$238) and Okinawa pork loin (HK$288) are available if you’re looking for a bit of variety. We sampled all of the items prepared in the smoker — with the exception of smoked cauliflower (HK$148), an attractive option for vegetarians — and found the star of the show to be the beef short rib (HK$548), a caveman-sized hunk of unctuous meat, rendered perfectly tender by the low and slow cooking method.

We also enjoyed the salt and pepper chicken (HK$118 for half, HK$218 for whole), which picked up the hickory smoke flavour in the best possible way, as well as the tangy Carolina pulled pork (HK$98 for 100g, HK$188 for 200g). All of the meats are best enjoyed with Smoke & Barrel’s three sauces: one is a traditional, slightly sweet barbecue sauce; another is inspired by Frank’s RedHot sauce; and the third — our favourite — is a vinegar-spiked Carolina-style sauce.

Cider-glazed baby back ribs (HK$208 for a half rack, HK$368 for a whole rack) had a great smoky flavour that contrasted well with the glaze, but we wished they were a bit more tender. The housemade sausages (HK$108) were well made but not a knockout, and the brisket (HK$108-308) — considered the holy grail of barbecue for many Americans, particularly Texans — has room for improvement in terms of flavour. We’d be remiss, however, if we didn’t point out that it had the right texture and the perfect ‘smoke ring,’ a rosy halo outlining each slice — worshiped by those in the know as an indicative hallmark of proper barbecue technique.

From the sides, the Asian cabbage slaw (HK$68) left us craving more zing, but we found it in the addictive housemade pickles (HK$48) instead, which provided a necessary contrast to the smokiness of the meat and helped to stave off palate fatigue. You could order fried Brussels sprouts with ponzu (HK$78) or okonomiyaki-inspired tater tots (HK$88), but our advice would be to stick to the classics: creamy mac & cheese (HK$88) and jalapeño cornbread (HK$68). For dessert, we loved the simple yet satisfying ice cream made in the restaurant’s soft-serve machine and topped with bourbon-spiked caramel and roasted macadamia nuts for a nice crunch (HK78).

On the drinks front, there’s a selection of house cocktails (HK$88 each) from which we liked the refreshing Spicy La Paloma, a concoction of tequila, grapefruit and jalapeño. There are also barrel-aged cocktails (HK$108 each) and no-nonsense classics like Jack Daniels & Coke (HK$78), margaritas (HK$88) and cans of Budweiser (HK$48). There’s a decent variety of international wines on offer, but we think it’s wiser to stay on theme and sample some American bourbon or, better yet, a pickleback: a shot of bourbon chased with a shot of pickle juice (HK$78).

With its globetrotting menu and dressed-up appearance, Smoke & Barrel isn’t your average American barbecue joint — but it’s not trying to be. This is a place that authentically practises some of the best culinary traditions of the American South — with mostly excellent results — while also shaking things up and catering to a crowd that appreciates variety. Fair prices, good service, a convivial atmosphere and that outstanding beef short rib will have us going back for more.

Calling all creatives and fans of just good design

Calling all creatives and fans of just good design

Both fashion and art are the ultimate vehicles of