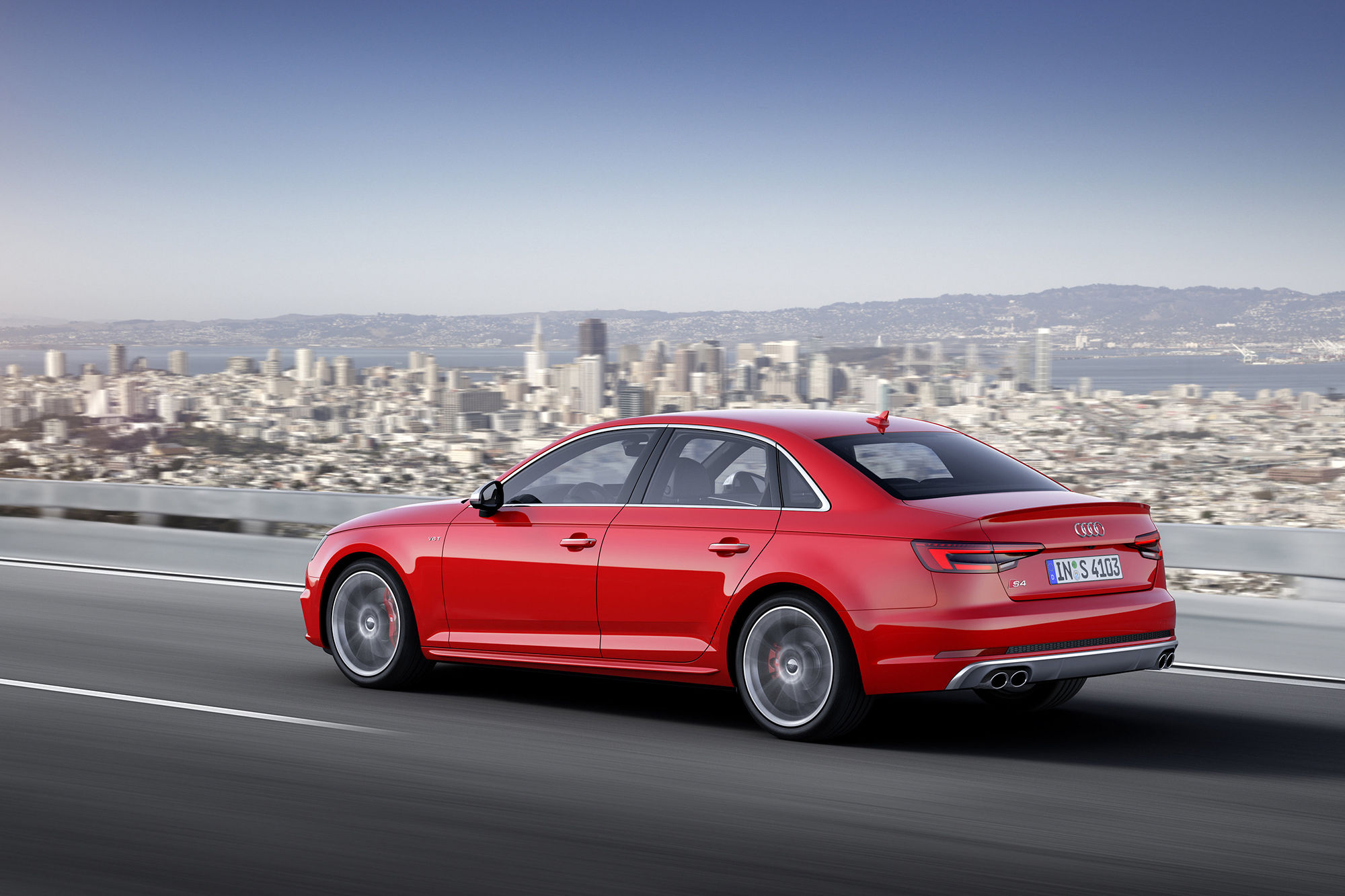 The Audi S4 has always been the world’s go-to all-wheel-drive executive sports saloon. For 2018, the German marque has kicked it up a notch with a turbocharged 3.0 litre TFSI V6 engine that produces a whopping 354hp. That’s 20 more than the previous car and means that, when combined with the eight-speed Tiptronic transmission, can hit 100kph in just 4.7 seconds. With a car that feels this sweet sitting right below its RS4 big sister, the competition has a lot to worry about.

Sure it may lack the aggressive feel of some of its German rivals, but get over that and you’ll find that the Quattro-all-wheel drive system adds a level of confidence few can match. With its ability to split traction between the front and rear, you’re never left yearning for more grip. If you so opt for it, the sports differential takes traction up a notch by constantly moving power between the rear wheels whenever needed. There is also electronic stability and traction control.

The Audi S4 features four distinct driving modes: Comfort, Auto, Dynamic, and Individual — selected from the switch directly above the cupholders. Dynamic mode is by far the most fulfilling, keeping throttle response strong and offering the right type of firmness through the bends without being overly harsh. The steering also becomes heavier, which improves feel and gives you the confidence to take it steadfastly around bends.

Fire up the engine with the keyless start and the Audi S4 gurgles to life from its chrome quad exhaust tips with a sound equivalent to cars equipped with at least two more cylinders. And as with all new Audis coming off the factory line, LEDs create a sleek, purposeful look which is a surefire way to let oncoming traffic know it’s just around the corner.

Inside, the star of Audi’s virtual cockpit is the 12.3 inches of high definition glory behind the steering wheel, providing essential information ranging from GPS and tachometer, to the entertainment system and everything in between. That system is also hooked up to a very powerful 755-watt Bang & Olufsen stereo which provides one of the crispest sounds you’ll probably hear in a car of this price range. A seven-inch centre console infotainment display allows you to view the rear camera when reversing as well as an overhead view, which is perfect for parking in tight spaces. There are also front and rear parking sensors, so even the worst parkers won’t have an excuse.

One of the best features in Audi’s “S” cars are its sports seats — saying it’s merely comfortable doesn’t do it justice and with adjustable sides, a massage function and an array of colour options, they are luxurious and functional. Going around a corner too quick? You can count on your seat’s side bolster to hold you in place.

In the rear, creature controls for your three passengers include climate control and a phone charging port. There’s also ample boot space for several large bags, and split-folding 40-20-40 seats allow for additional room for larger items.

The Audi S4 is the car we hoped it would be. Efficiency, performance and quality have been wrapped up snugly into an understated package, typical of the performance Audis before it. Its effortless cruising capabilities, combined with a focus on comfort and tech make this a vehicle that will put a smile on your face at any time of the day. If you’re in the market for a daily driver four-door, the S4 is the perfect sleeper for your city adventures.

Audi Sports Car Audi virtual cockpit Luxury Sedan new cars Audi S4 turbocharged engine eight-speed transmission sleeper car
Shatricia Nair
Managing Editor
Shatricia Nair is a motoring, watches, and wellness writer who is perpetually knee-deep in the world of V8s, tourbillons, and the latest fitness trends. She is fuelled by peanut butter and three cups of coffee a day.
Motoring Wellness Watches Beauty Style
Sign up for our newsletters to have the latest stories delivered straight to your inbox every week.