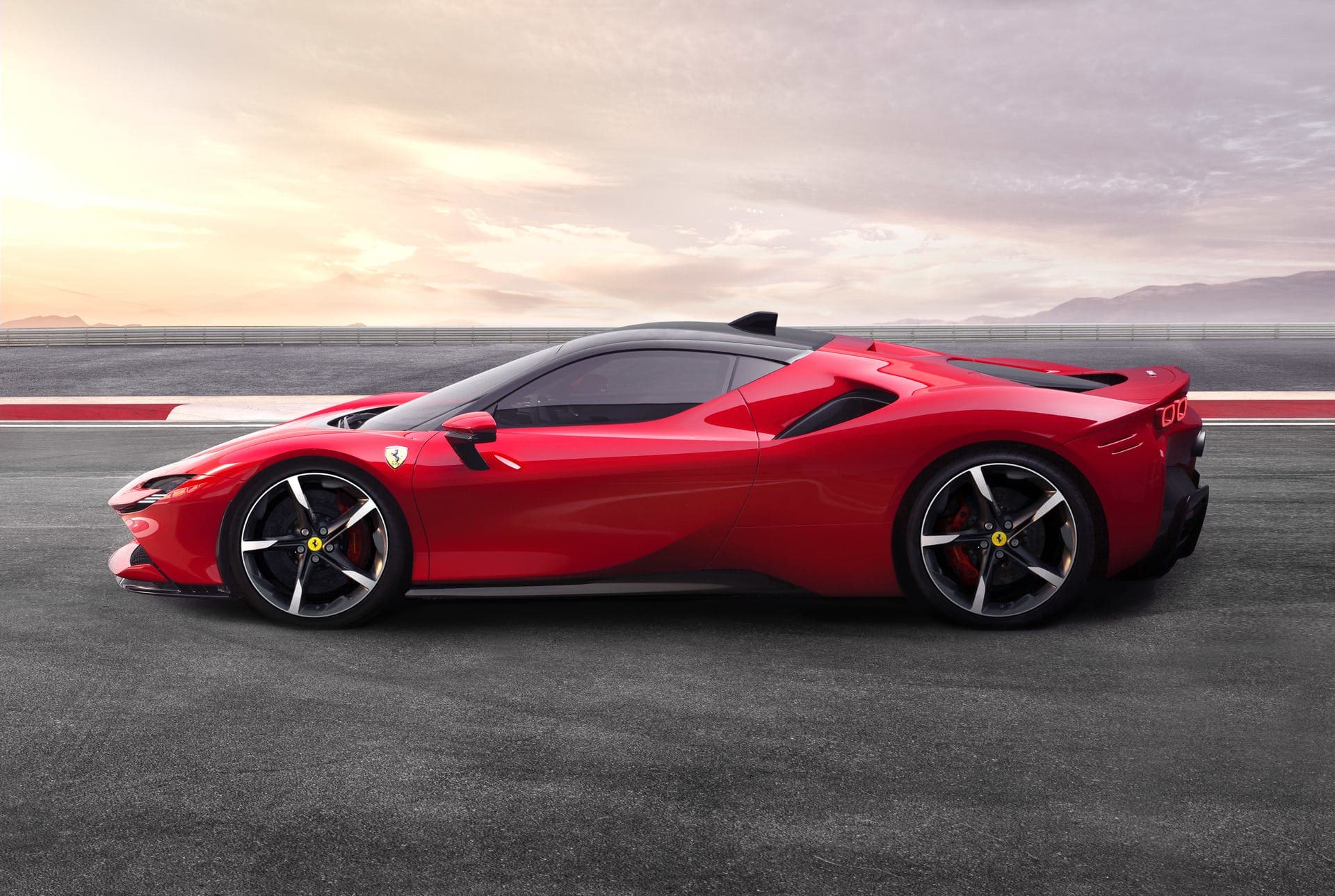 When the LaFerrari and its 949 ponies came galloping down the tracks in all its chiselled, low-slung glory, the rest of the motoring industry stopped dead in its tracks with teary eyes and gaping jaws and then crowned it one of the “holy trinity of supercars”.

But that’s old news now, because Ferrari has just dropped what it’s called the SF90 Stradale onto roads near you.

Why is this a big deal, you ask? For one, it’s the company’s first series production plug-in hybrid electric vehicle (PHEV). Secondly, it’s Ferrari’s most powerful street-legal car so far — by a long shot. Milestones are being made here, guys.

Its specs are mind-blowing; 986 combined horsepower is met with a maximum of 800Nm of torque, both of which will push you to 100kph in just 2.5 seconds and on to a top speed of 340kph. These are numbers that you’ll probably never experience but still nice to know you have.

To achieve this, Ferrari’s top minds have blended its multi award-winning twin-turbo V8 with a tripartite of electric motors that add a zesty 216hp to the mix, and the result is an all-wheel drive that’s rather off-the-hook. Everything is mated to an eight-speed dual-clutch transmission. Still, it’s far from a slapdash electrification job — the F154 powertrain used is described as a “totally new architecture”, with only minor parts being carried over.

So on to the electrification bit then. Unlike the LaFerrari, which was a mild hybrid where electric motors only aided the engine, the Ferrari SF90 Stradale is a plug-in hybrid with three electric motors that can carry the car for almost 24km before the engine kicks in. Two of these drive the front axle, creating an all-wheel drive system whilst adding traction.

When in electric mode, only these two electric motors drive the wheels, making a front-wheel-drive car, with a limited top speed of 135kph. Still, the SF90 Stradale’s combined performance is impressive enough to break the LaFerrari’s record time around its Fiorano test track with a cool 0.7 seconds to spare.

It’s easy to see how much fun the design team with this car, because it sure as hell looks busy. There are slits here and there, and folds and gaps at the back that not only give the SSF90 a super-futuristic spaceship-like vibe but also supreme aerodynamics and downforce. Elements of the F8 and SP38 Special Projects car helped inspire the car, the latter of which is a crazy one-off, so expect old-school features like flying buttresses atop this architectural gem.

Inside the cockpit is an equally tech-y affair, with a 16-inch screen in the central instrument cluster and a steering wheel with plenty of buttons to push. Just make sure you know where everything sits before you head to a track near you.

There’s plenty to rave about the Ferrari SF90 Stradale, including the firm’s extra dedication in keeping the weight down in place of the hybrid system, and its new “quiet aluminium” which we can only assume keeps the noise level down. But mostly it is Ferrari’s efforts in keeping up with the times in the best way it knows how.

This is, after all, a car that’s supposed to celebrate 90 years of Scuderia Ferrari’s founding, and is named after the storied automaker’s 2019 Formula One race car. Little wonder it’s just as feisty.

Ferrari Motoring Hybrid cars plug-in hybrid
Shatricia Nair
Deputy Editor
Shatricia Nair is a motoring, watches, and wellness writer who is perpetually knee-deep in the world of V8s, tourbillons, and the latest fitness trends. She is fuelled by peanut butter and three cups of coffee a day.
Motoring Wellness Watches

Thanks to solar panels, this electric vehicle doesn’t need to be charged