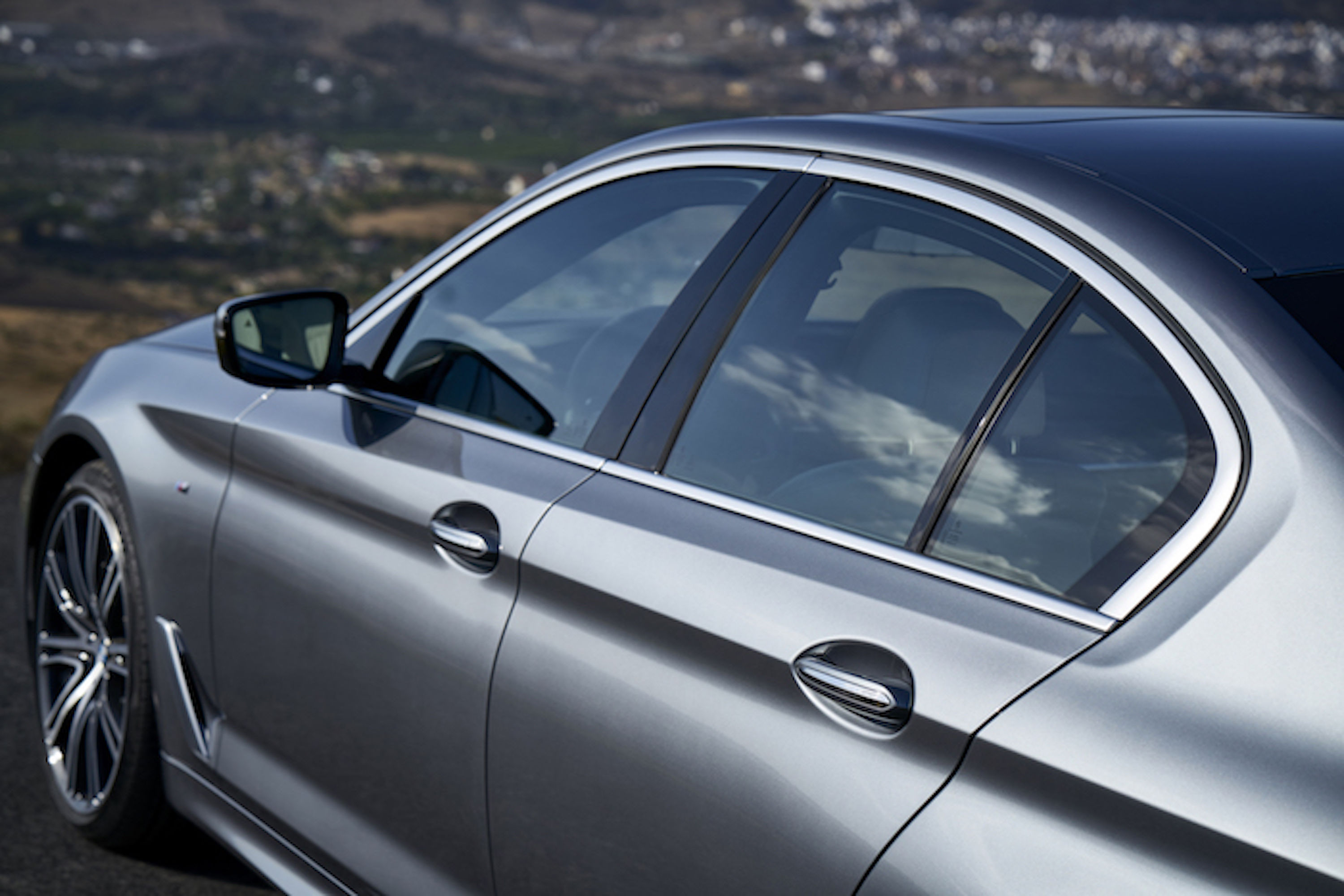 Since its debut in 1972, BMW’s 5 series business sedan has sold over 8 million models worldwide. Just unveiled this week in the SAR, spokespersons Dr. Allen Zeman and martial arts movie star Donnie Yen presented the latest generation of the series — including a full overhaul in all aspects from fuel consumption to ergonomics to design. 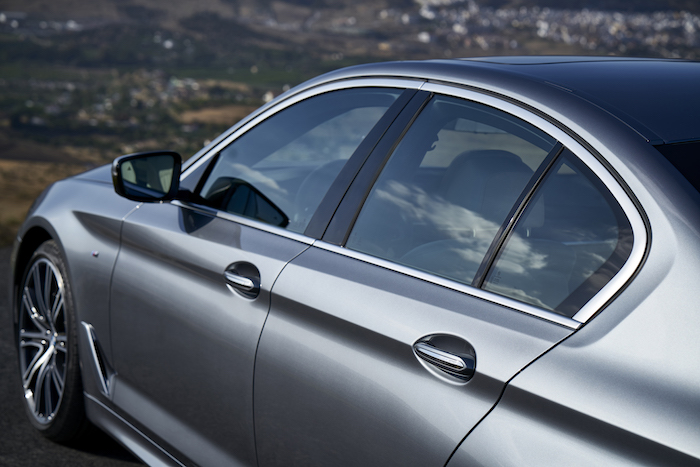 The all-new 5 Series has lost quite a bit of weight since its 2010 predecessor, shaving off 100kg, yet retaining even weight distribution and aerodynamic lines in a powerful and sporty, coupé-like silhouette. An assertive swage line sweeps up into a forward surge, so you can get a feel for the kind of energy and leadership that the new 5 Series is all about. It comes in three equipment packages: the Sport Line, Luxury Line, and M Sport Edition.

As such, it offers three variations of the brand new 4-cylinder and 6-cylinder engines, coupled with the latest BMW TwinPower Turbo technology, which is equipped with the 8-speed Steptronic automatic transmission. The most impressive and suitable for speed chasers out there is the 540iA xDrive, aka the M Sport Edition, which features the 3-litre 6-cylinder engine with a max output of 340hp. That’s 34hp more than its outgoing generation and uses 10% less fuel — a 0-100km/h sprint only takes 4.8 seconds, almost a whole second faster than before. For the models using the 4-cylinder engine, you get a 25% fuel consumption saving compared to previous models. 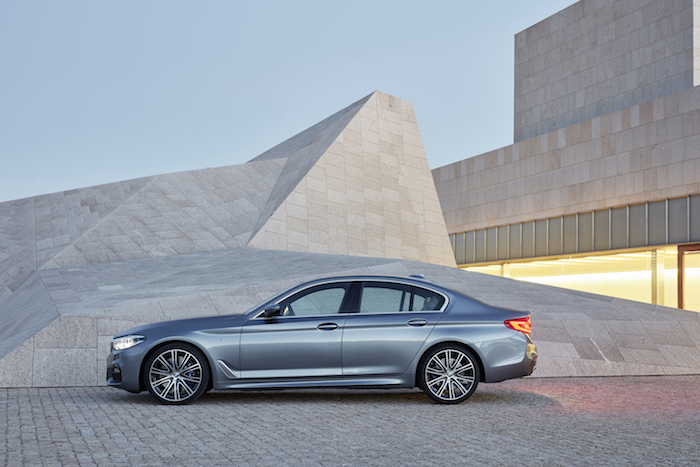 Introduced to the Hong Kong market for the first time, the M Sport Edition is also the first ever 4-door business sedan that’s equipped with an xDrive all-wheel-drive which gives it top-notch versatility in any road condition; it’s definitely the one to go for if you’re looking for a high-performance, yet fuel-efficient luxury sedan. Continuing to set the tone for this energetic beast, the new arrow-shaped headlights for the 5 series now extend up to its kidney grilles for a more agile look. The LED headlights are also adaptive, turning accordingly to adjust brightness and angle of light just by a turn of the steering wheel, so you can see deep into corners. It can also dim down or change angles to avoid dazzling other drivers on the road. They might already be dazzled just by seeing your car, though.

At 4,935mm, the luxury sedan is slightly longer than its predecessor, but looking within, it’s also got a very spacious, broad interior. There’s even more space in the boot, with a 530-litre compartment, plus the rear backrest can also be lowered to increase luggage capacity. With luxurious Nappa leather seats which offer eight massage programmes, it’s a joy to sit in. 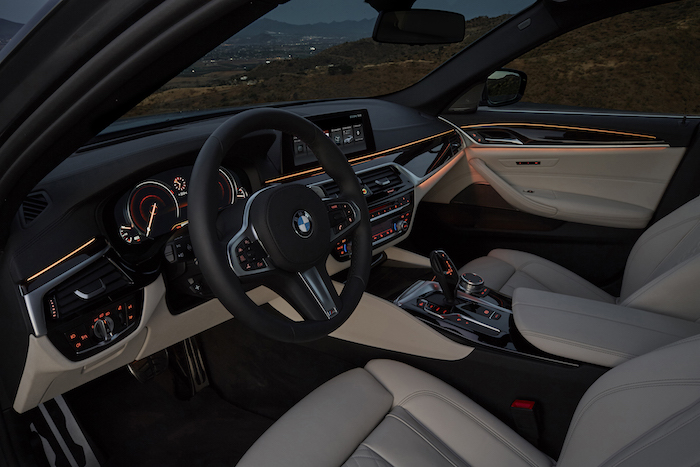 As if there’s not enough to swoon over already, the 5 Series offers a two-zone (or four-zone optional) climate control, which also provides ionization and a soothing air fragrance. If you feel the need to romance your passengers even more, there’s also an ambient light function, with coloured LED light effects in 11 different styles and six colours. Under driving conditions, it’s very quiet, perfect for a business sedan, thanks to the new acoustic capsule technology which reduces powertrain noise, plus soundproofing materials wrapping around the engine and transmission. All the better for you to hear the music coming from the high-end Bowers & Wilkins Diamond surround sound system, a sweet luxury option that will make you feel like you’re in an opera house with 16 strategically-placed speakers. 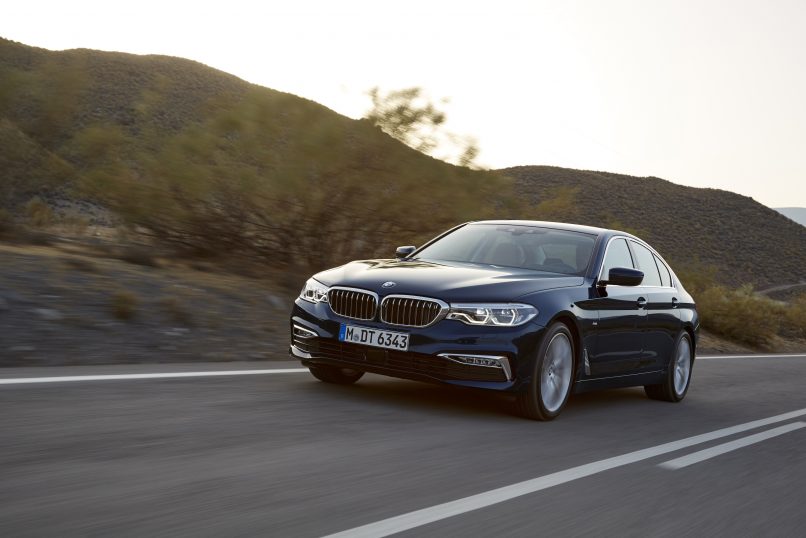 The 5 Series also comes with more advanced innovations. Starting with driving assistance, there are two new intelligent safety features that make it well suited for traffic conditions: the Approach Control Warning and Person Warning with City Braking Function activates when pedestrians are approaching to prevent collisions, and the Active Cruise Control with Stop and Go Function helps you automatically measure and maintain a suitable distance to the vehicle in front. The Display Key from the 7 Series also makes its debut with the 5 Series, which displays important information such as the fuel level, whether you left the windows open, and even the auxiliary heating system — clearly the feature that Lan Kwai Fong business magnate Allen Zeman was most impressed with at the Hong Kong launch. Coupled with the new BMW Gesture Control — which lets you direct functions like taking a call with a swipe of a finger — driving the 5 Series is like a page straight from a futuristic storybook.

See it for yourself: The 5 series will be on show from 25-26 February, 11am-8:30pm at Level LG2, Festival Walk, 80 Tat Chee Avenue, Kowloon Tong, Kowloon, Hong Kong. For more info, check out the website at 5series.bmwhk.com

Motors Cars BMW Sports Sedan Automobiles BMW 5 series Luxury Sedan Business Sedan
Evelyn Lok
Managing Editor
When not trying out the latest beauty and wellness trends, Evelyn is likely enjoying a perfectly balanced negroni or exploring some of Hong Kong's best new places to eat and drink. At Lifestyle Asia she covers everything from the biggest events in town to interviews with Hong Kong specialists, with topics spanning art, food and drink, health, tech, and travel.
Beauty Wellness Events Art Drinks
Sign up for our newsletters to have the latest stories delivered straight to your inbox every week.