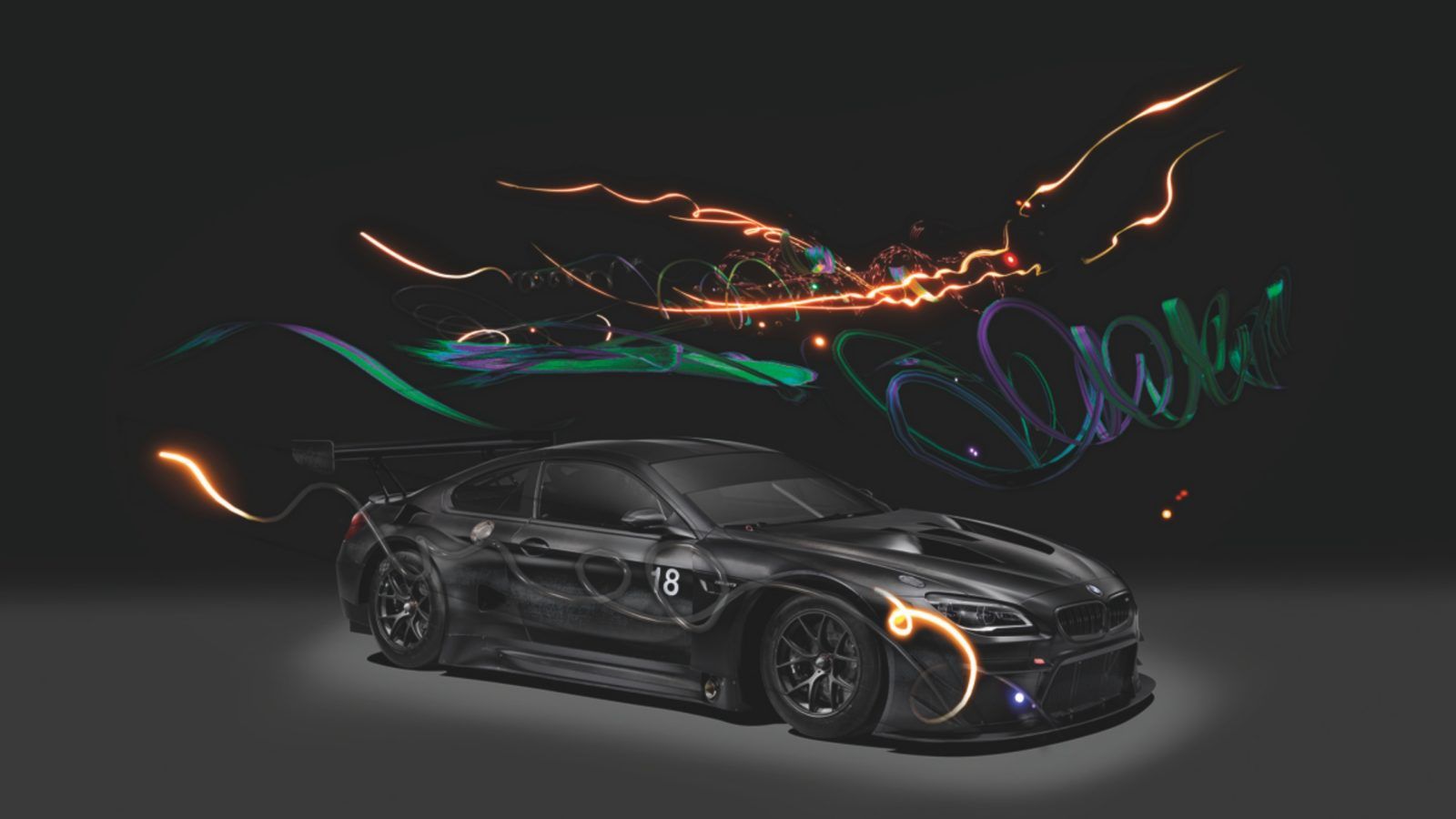 Prestige’s Jon Wall traces the 46-year history of the BMW Art Car and the roster of artists who created these extraordinary automobiles.

Almost from the day when Carl Benz dropped a two-stroke petrol engine into the back end of a tricycle, thus laying the foundations of the motor age and a vast global automobile industry, artists have taken inspiration from cars – and car makers, in their turn, have been inspired by art. Perhaps that was inevitable, as few modern inventions had such a profound effect on society and culture in the 20th-century as the motor car. As its use became widespread, the automobile became for time a liberating force, one that enabled its owners to travel far more widely, independently and spontaneously than they’d ever previously imagined possible, and especially so in the United States, where it became an essential theme in popular and even high culture.

You may also like…
Gear
Shoot and score with BMW’s newest models: the 4 Coupé, the 6 Gran Turismo and the M8 Competition
Gear
Bold and brilliant: BMW continues to turn heads with the launch of its brand new THE 4 Coupé in Hong Kong

Over in Europe, and especially Italy in the early decades of the 20th century, the automobile, technology, speed and dynamism served as heady influences for the Futurist movement, with cars depicted largely in the abstract in works such as Luigi Russolo’s Dinamismo di une Automobile (1913), and Giacomo Balla’s Speeding Automobile (1912), as well as being celebrated enthusiastically in the Futurists’ manifesto: “We affirm that the world’s magnificence has been enriched by a new beauty: the beauty of speed. A racing car whose bonnet is adorned with great pipes … is more beautiful that the Victory of Samothrace [the latter an ancient Greek sculpture of Nike dating to the 2nd century BCE],” wrote its author, the poet Filippo Tommaso Marinetti.

The traffic between the car and art wasn’t merely in one direction. For example, the great Italian-French craftsman and auto designer Ettore Bugatti, some of whose creations are regarded as among the most beautiful motor cars ever made, came from a line of esteemed artisans and artists. His father, Carlo, designed and manufactured Art Nouveau furniture, musical instruments and jewellery; his brother, Rembrandt, was famed for his vast bronze sculptures of wildlife; and his uncle, Giovanni Seganti, painted Alpine landscapes.

By the second half of the 20th century, cars were featuring as artistic subjects in a variety of ways, such as the Cadillac encased in concrete by Wolf Vostell some 50 years ago (the result, Concrete Traffic, now sits in a parking garage at the University of Chicago), Salvador Dalí’s Clothed Automobile collages, and Andy Warhol’s Cars, which was commissioned by Mercedes-Benz and completed shortly before the artist’s death in 1987. The grimy engine of an old Mercedes even featured as an installation (Das Beste oder Nichts – The Best or Nothing, 2010) by the Vietnamese-born artist Danh Vo in the Guggenheim in New York. Some would even argue that the motor car – or at least some motor cars – can be regarded as a work of art in itself.

More pertinently for the purposes of this story, however, automobiles are also increasingly being used by artists as moving canvasses on which can be expressed notions of speed, technology, consumerism and colour, and a host of other themes. Their number include an old Triumph GT6 sports car painted by street artist Banksy (2005), an Audi A1 re-imagined by Damien Hirst in 2010, a Ferrari 430 sprayed with colour by graffiti artist Crash (2015) and a Bentley Continental GTC given the full treatment by Pop Art pioneer Peter Blake (2016). Most famous of all, though, must be the BMW Art Car project, in which 19 leading artists painted, embellished or otherwise manipulated one of the German manufacturer’s automobiles so as to turn each car into a rolling work of art.

The project began in 1975, when the French auctioneer Hervé Poulin, who was also a keen amateur racing driver, decided to take part in the famous Le Mans 24-hour sports car race and invited his friend, the American sculptor Alexander Calder (best known for his kinetic mobiles), to decorate his BMW 3.0 CSL, a car nicknamed “Batmobile” among motorsport enthusiasts for its enormous rear spoiler. Calder had already accepted a commission from Braniff Airlines that year to turn one of its aircraft into a “flying canvas”, and for Poulin’s car – it eventually finished the race in 24th place – he adopted a similar approach by daubing the primary colours red, blue, ochre and white across its exterior surfaces to give a heightened and blurred impression of speed.

Following the original Art Car’s positive reception, BMW provided a second Batmobile one year later, which was again entered at Le Mans. The American artist Frank Stella, who was engaged to design this car, covered the machine with a monochromatic grid design that resembled graph paper and a blueprint, giving it a highly technical appearance.

Two further Art Cars were created in the 1970s. The first, a BMW 320i that raced at Le Mans in 1977, was designed by Pop Artist Roy Lichtenstein in his inimitable comic-book style (his famous painting In the Car, now owned by the National Gallery of Scotland, is based on an illustration from comic, Girls’ Romance). More abstract than figurative, Lichtenstein’s artwork on the BMW nonetheless used comic techniques to suggest a car moving at high speed through the countryside; before its track debut, it was unveiled to the public at the Centre Pompidou in Paris.

Probably the most famous Art Car of all was the Procar racing version of BMW’s mid-engine M1 supercar, which was entered in the 1979 Le Mans with a driver team headed by the famed German racer Manfred Winkelhock, who brought the machine to the chequered flag in a creditable sixth place. That, however, was less the reason for its renown than the fact that the car was painted in its entirety – and in person – by Andy Warhol, who slapped on to its bodywork broad and seemingly random patches of colour. “I have tried to give a vivid depiction of speed,” said the artist of his work. “If a car is really fast, all contours and colours will become blurred.” It’s said that it took Warhol less than 30 minutes to complete the job, for which he was paid nothing more than the cost of the paint.

Over the next 38 years, until 2017, a further 15 Art Cars were created by a roster of artists chosen by a panel of international experts: the list included eminent names such as the Americans Robert Rauschenberg and Jeff Koons, Australian Ken Done, Italian Sandro Chia, Briton David Hockney and, from China, Cao Fei. Not all artists painted the car itself: in 2007, the Berlin-based South African Robin Rhode drove a blue Z4 sports car across a floor to create multi-hued tyre tracks, while in 1999 the American Jenny Holzer emblazoned bright slogans, such as “Protect me from what I want”, across the sleek form of a V12 LMR prototype racer (a similar car, which was designed and built for BMW by the Williams Grand Prix operation, won outright at Le Mans that year).

In 2017, Guangzhou-born Cao Fei addressed issues such as Chinese history and the future of mobility through a multimedia installation that used a carbon-black M6 GT3 racing car as its basis. Although best viewed via the full installation with which it was originally presented at Beijing’s Minsheng Art Museum, the car itself took to the track at Macau in the same year, eventually claiming fourth place in spite of the extraordinary augmented-reality projections that accompanied its progress around the Guia circuit.

And if that, arguably, qualifies as the most spectacular BMW Art Car of all, then surely a special mention to go to number 17, the M3 GT2 that was re-worked by Jeff Koons for its participation at Le Mans in 2010. The car was covered with a wrap of brightly contrasting multicoloured strakes that evoked a stunning impression of movement even while standing still. Although retiring from the race after five hours due to technical problems, Koons’ artwork looked so sensational when tearing around the 13.6km-long circuit that its appearance alone could surely be regarded as a creative victory, even if its performance on the track is probably best forgotten.

BMW cars bmw art car
You might also like ...
Gear
Shoot and score with BMW’s newest models: the 4 Coupé, the 6 Gran Turismo and the M8 Competition
Living
27 Questions: Billy Ha, Marketing Manager at Shangri-La Group, and hobbyist photographer for BMW
Gear
The BMW 8 Series Coupe makes its grand return to the global stage
Gear
The new BMW M5 Competition is 616hp of pure adrenaline rush
Lifestyle Asia
Here's where you can read the latest news and stories from Lifestyle Asia and our sister titles PrestigeOnline and Augustman, curated from all of our editions in Hong Kong, Singapore, Kuala Lumpur, Bangkok and India.
Luxury
Sign up for our newsletters to have the latest stories delivered straight to your inbox every week.