Why the best chef in the world gets sentimental for Maserati

What do you ask when you have 30 minutes’ worth of undivided attention from one of the greatest culinary geniuses of our time? We were more than a little bit star-struck to be interviewing Massimo Bottura, who recently paid a visit to Hong Kong as Maserati’s ambassador.

Besides his TV limelight thanks to acclaimed Netflix documentary series Chef’s Table, the 55-year-old sprightly Italian was proclaimed best chef in the world last year for his 3-Michelin-starred restaurant Osteria Francescana, which was duly awarded the number one title of World’s 50 Best Restaurants 2016 after being in the top 5 from 2013 to 2014.

Despite his lean frame (read his book Never Trust a Skinny Italian Chef), Bottura is a human dynamite overflowing with steadfast words, persuasive gesticulating and emotion, harnessing intelligence and passion in the way he commands a room as well as the way he cooks. Before becoming a chef, he went to law school, after all.

Bottura has received heavy praise for his natural ability to tell poignant stories through his dishes, and for the way he plays with traditional Italian flavours through contemporary experimentation, presenting his enlightened modern cuisine in the medieval centre of Modena.

Besides all this, he’s also a passionate campaigner. He founded Food for Soul, a global movement to feed the hungry, which subsequently led to the launch of London community kitchen Refettorio Felix. The kitchen uses surplus food to provide delicious lunch menus for guests from underprivileged backgrounds. Stopping global food waste is also a cause very close to his heart, having recently spoken on the issue in front of leaders and dignitaries at the G7 in New York.

We caught up with the Maserati and Gucci brand ambassador during his recent short trip to Hong Kong to talk about how he juggles his endless projects, and his equal passion for food and fast cars.

Welcome to Hong Kong! What brings you here this time around?

This is maybe my 10th time here. It’s one of my favourite cities in the world. Hong Kong is all about the energy, the vibe that you breathe. My team and I have to serve 400 burgers tonight [laughs]. We’re doing that in the new Gucci store opening today, and then we’re hosting the most influential people of Hong Kong for dinner in the Jumbo Floating Restaurant. The whole abandoned top floor of the restaurant was restored in collaboration with us at Gucci. I think it’s an amazing space, and when I saw it we decided to do the big dinner for Gucci’s opening there.

Did you always know you were going to become a chef?

I was meant to be the lawyer of the family. My family business is in oil – not like olive oil, but petroleum and gasoline. My father was extremely precise and was a real director, so my older brother had to be an engineer, the other a doctor, and then the next an accountant – so I had to be the lawyer. But in the second year of university I said ‘No I can’t, I don’t want to deal with this for the rest of my life’. My brother Paolo and my mama supported that and pushed me to follow my passion.

I always loved music, art and food – one of my passions was food. One week later I opened a small restaurant in the country. I struggled for 20 years. It’s not about being a rock star or travelling the world… for more than 20 years it was very difficult. Our job is all about hard work.

That’s crazy, one day you wanted to be a chef and the next week you opened a restaurant.

That’s my life, it’s crazy. I opened this very small restaurant with big dreams. The more you dream big, these things follow. Two days ago I was in New York where I had to speak in front of the G7. I was there in front of all the ministers, never having even dreamed before of having a microphone speaking in front of the G7.

What were you speaking about?

I was speaking about a project that I started at the Universal Exposition in 2015. The theme was ‘Feeding the Planet, Energy for Life.’ I thought that the most important thing to feed the planet was to fight waste, because a third of world production goes to food garbage – while 860 million people are in need of that. We don’t need to produce more, we need to fight waste. You only need even just 40% to feed the needy. We showed this project in an amazing space that we restored with the help of architects, artists and designers. It became an icon of the Universal Exposition and has now become an icon of Milan.

We were so successful that every single delegation came to see our project – including the mayor of Rio de Janeiro. He said, “We want you at the Olympics next year with a project like that.” Why not? We’ve created a foundation to build this space outside the Olympics in a very poor neighbourhood in Rio de Janeiro. That was the beginning of a stream of similar projects.

You’re a busy man indeed. On top of that, you also take on the role of brand ambassador for Maserati. How did that start?

I’m from Modena, the city of Ferrari, Maserati and Lamborghini. I grew up hearing the sounds of 6-, 8-, 10-, 12- cylinder pipes. It’s something that is part of my DNA, a great privilege. Around four years ago, I was working with the brand on some projects. At one point Mr. Wester (the former Head of Alfa Romeo and Maserati) came to me. He said “I was listening to your speech and was struck by the way you approach food. It’s very similar to how we approach cars.”

He said, “You mentioned looking at your past in a critical way rather than in a nostalgic way to bring the best of the past into the future. In the same way we build our cars thinking about the incredible and stylish cars of before, but applying new technology.”

I said, “Yes that’s exactly what I’m doing in my restaurant.” So we started talking like that and that’s how I became brand ambassador. At that point I had never done it before, but I think with a brand like Maserati I feel very comfortable. Firstly because it’s from Modena like me; secondly, I’m obsessed with quality and so I thought it would be a good collaboration – and it has been!

You grew up with Lamborghini, Ferrari and Maserati… why did you choose Maserati over the other two?

Because it’s from downtown Modena! It’s just five minutes driving from my restaurant and six minutes from my house! You just have to cross the Emilia and you arrive in the company downtown. Maserati is also older than Ferrari, much older than Lamborghini. The last two are cars for the country people, that’s what they drive. Those of us living in downtown Modena, we drive Maserati. For us it’s much more stylish. If you want to use the car in a circuit and try your ability as a driver, you can have an MC – but if you drive everyday like I do with my Levante, it’s the best in terms of comfort. Amazing car, if you have the opportunity to speed, you just put it on sport mode and you fly. Maserati has a very particular sound… it’s like when you eat a special emotional dish, you close your eyes and it takes you somewhere.

So the preference goes way back.

Yes, everything started a long time ago. My first memory of Maserati was in 1971. It was lunch time, and we were sitting there without my father. Suddenly we heard beep beep beep and he drives in with a red Merak. I remember the colour so clearly. We were all excited about that, and the only one upset was my mom, because it only had two seats. She was saying, “Where are we going to put anything!” So my father comes back the next day with an Alfa Romeo with four doors, so he could keep the Merak.

What are your most memorable moments as the car’s brand ambassador?

I hesitate to say, but I was cooking in downtown Milan at the Universal Exposition. I was with my Japanese sous chef one night, and I was so tired I said, “Taka I really want to go home. I’m so tired, so don’t be scared, I’m going to be driving like crazy.” We got back to Modena which was 160km away in 45 minutes, driving 285km an hour [laughs]. There were speeding tickets that went to Maserati. They asked us who was driving the car that night and we answered, we don’t know!

You have so much on your plate, how do you stay on top of everything?

If you live your life as I live it, then you can. I write my life. I confront everything with a team of 56 people who are into what we are doing – they’re not just employees, they live their job 7 days of the week. They share the vision. When you have these kinds of people around you, you can do incredible things. 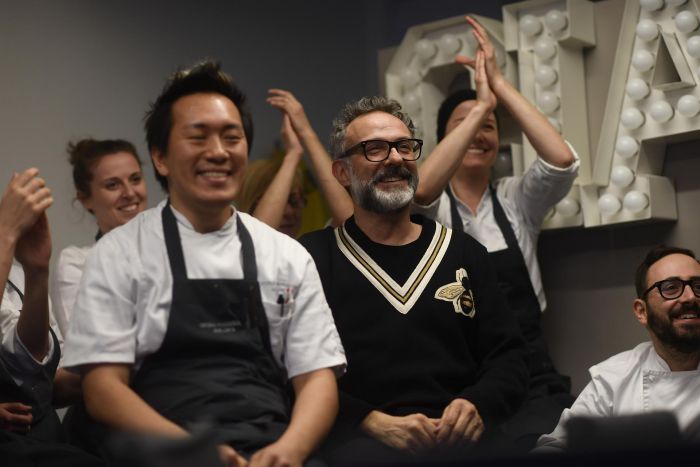 We grow very slowly… it’s been 32 years since I started, so you have a number of people around the world working with you, trusting you, believing in your ideas… I’m thinking about Christina, Francesca and Sofia – the Food for Soul team. They’re there because they want to be there, they believe in the fact that we can change the world. They are very talented and dedicated individuals, making very little money. For me it’s always been like that: if you have that kind of passion, it’s not about the money. If I cared about the money I would have stayed with my father driving a sports car at 18 having fun, but it wasn’t what I wanted from my life.

You’ve done quite a few projects in Asia. Are you thinking of doing anything eastwards in the future?

I will never open another Osteria Francesca in the world – I don’t believe in numbers, I believe in emotions. But for the palate and high food culture, I think Asia — especially Hong Kong and Tokyo — could be a very interesting market for me.

I was approached by the Japanese Minister of Agriculture at my G7 talk, and she said, “I would love a project like that in Japan, especially for the Olympics 2020.” It could be very interesting.

Electric flying car takes off for the first time in Dubai